Since the oppressive heat has broken I got the itch to do some hiking.  Tuesday I drove to Morgan-Monroe State Forest, about 20 miles from my house,  to hike the Low Gap Trail.  It’s a 10 mile loop trail through the Southern Indiana hill country.  It’s not as rugged as Brown or Jackson county, but there are some 200 to 300 foot climbs on the trail.  That may not seem like much to those who live near the Appalachians or out west, but there are few parts of the trail that are level, you are either climbing or descending, so it’s a good workout.


The best part of the trail is the descent into Sweedey Hollow.  The trail drops down from a ridgeline then parallels a creek bed, crossing it several times.  Soon the walls of the hollow get closer and closer and some eye-catching rock formations appear.  The rocks in this area are sandstone with a strong grain.  They tend to break off in flat pieces into the stream bed.  Many of the larger rocks in the hillsides have lost their lower parts and now overhang the hillside.  I read that there are some endangered orchid species in the hollow.
Here’s a pic of the stream bed through Sweedey Hollow, dry as a bone.  Most of the rocks are flat pieces of sandstone.  About four miles further the trail crosses another stream which has a very different geology. There the rocks are mostly round and there are a lot of geodes, although you have to get away from the trail to find any now.  Geodes look like big gray eggs, but break one open and it is hollow with crystal formations. 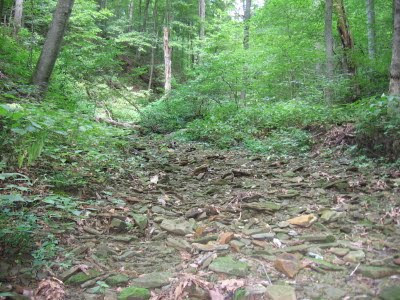 This is a pic of a rock that had some nice lichen patterns.  The camera, or my camera skills, don’t do it justice. 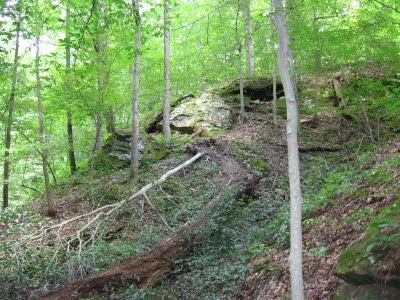 This is a pic looking up at a rock formation that has lost the lower part and now has an overhang.  There are a number of formations like this in the hollow. 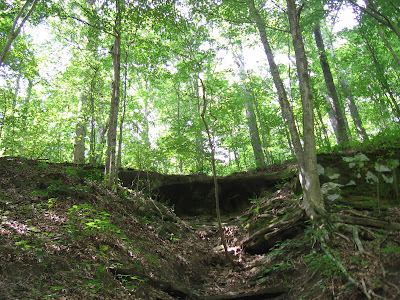 Before reaching the largest overhanging rock the batteries went dead in the camera.  There’s a large rock formation near the streambed with an overhang  about 100 feet long that you can walk under.  There are some large trees on the hillside directly above the overhang.  Makes me wonder when it will finally collapse – tomorrow, a hundred years from now, or not for another ten thousand years, you just don’t know.
Posted by gardenvariety-hoosier at 5:17 PM

Awesome pictures! I love going to places like this. And so close to your house! What could be better?
~~Lori

Hopefully that overhang will not choose the day you decide to stand under it to break loose eventually! Beautiful location and it looks like it was a gorgeous day. We have not been getting out and hiking as much this year as we normally do and your post is inspiring me to correct that situation.