Parsnips are one of the first vegetables planted in the spring and probably the last one out.  I expect to pull up the last of the parsnips in February next year.  Well I was wondering what kind of yield they would give me.  They looked good all year.  Sure there was some kind of rust/blight on them from August on, but they quickly produced new leaves to replace the old ones.
The ground had frozen a little, but then we got a warmup – it has been a warm December so far – and it seemed a good time to get some up.  At first I tried the pitchfork but they are not like potatoes, the taproot is too deep to loosen that way.  I found the best method to pull them up was to jam my fingers straight down into the dirt on either side of the parsnip, then grab the root and pull it straight up.  That dirt is cold! 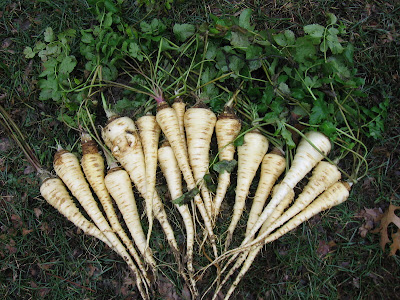 They are real nice parsnips.  I pulled up about two feet of bed – about 1/3 of them – and got a nice mess of parsnips, if there is such a thing.  It’s still warm and the ground not frozen.  Should I pull some more up?  Once the ground freezes I’ll have to wait for a thaw before I can get any more out.  That could be early next spring.
It wasn’t long before a few of them were cut in ¼” slices, drenched with oil and herbs and roasted.  Oh yeah.   My brother and his wife sent me a smoked tenderloin.  I sliced up more parsnips and roasted them until soft, then put the tenderloin in the pot  covered with honey mustard and some apple slices and roasted it all some more.  The flavors melded really well.  Once in a while I surprise myself when I attempt to cook. Have a happy holiday.
Parsnips 4 lbs 6 oz
Posted by gardenvariety-hoosier at 4:34 PM 4 comments: