Maybe I was a little premature with my declaration that the worst of the wet weather was over.  After a very nice Sunday that let me get a lot of work done, the last coat of stain on the deck and the lawn mowed and trimmed, the clouds gathered up that evening and dropped about an inch of rain.  Again.  This afternoon the sun has finally returned. Hope springs eternal.

Harvests are suppressed due to a shortage of sunlight.  The largest harvest was the Calypso pickling cucumbers.  Five of them, totaling 3.6 pounds, were turned into three quarts of refrigerator pickles. 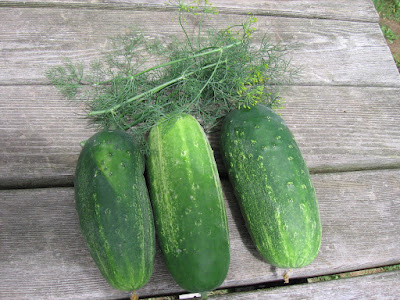 Three pickings of raspberries gave me 1.5 pounds.  The summer picking is nearly finished, but the Tribute strawberries are rested and blossoming again. 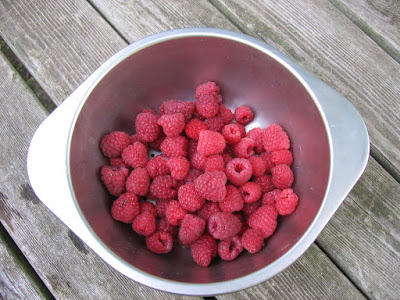 Cole crops were represented by a head of Gonzales cabbage.  A few Provider beans and okra made for some vegetable sides.  The Provider beans aren't very nice compared to what they can be, the sun problem again.  Marengo Romano pole beans, a yellow variety, should be ready to pick soon.  They are much earlier than their Fortex neighbors.  Can't wait to try them. 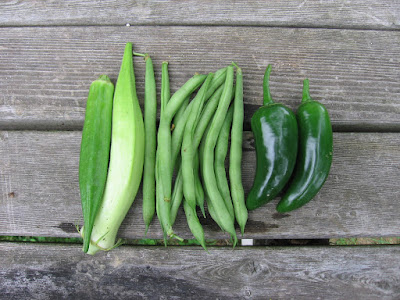 The jalapeno peppers are the best I've ever grown, large, hot and full of flavor.  I bought the plant at the local greenhouse and can only guess they seeded an improved cultivar, because they are much better than last year.

One butternut squash was left from last season.  Would it be good?  As a matter of fact, it was fine. 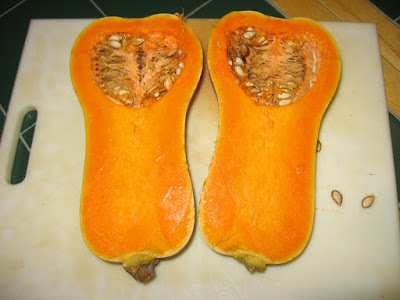 One upside to the cloudy cool weather is the lettuce, which has found a new life.  The seedlings in the SWC were just about done, now they are looking like they will make some more lettuce. 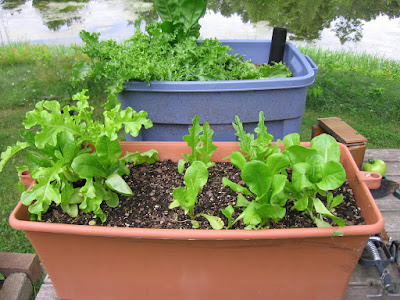 So far this season I've harvested just under fifty pounds. 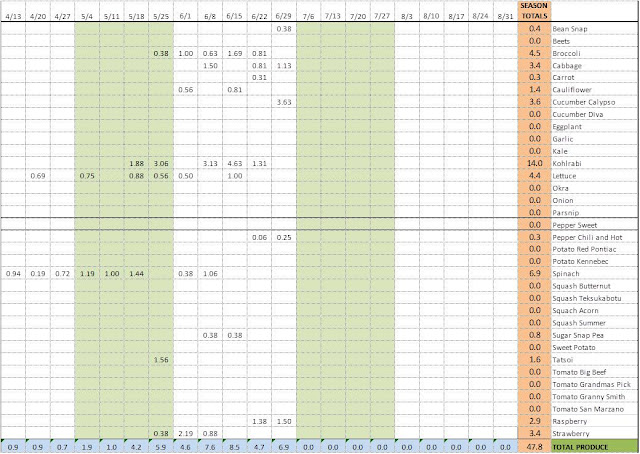 To see what other people are growing visit http://daphnesdandelions.blogspot.com/
Posted by gardenvariety-hoosier at 5:40 PM 5 comments:

The title was a little over the top, but the weather for the last two weeks has not been plant friendly.  Too much rain and  too little sun is not only adverse to photosynthesis and growth, but is conducive to fungal diseases.  Today it looks like the wet weather is finally clearing out and things may dry out.  I'm sick and tired of walking through wet grass and avoiding mud.

The garlic was knocked over by the storms a week ago.  Before the most recent storms marched through I tried digging a few of them up but so much wet soil came up with the roots it just seemed futile.  It's going to take a while before the ground dries out enough to get the garlic out, if it hasn't rotted out. 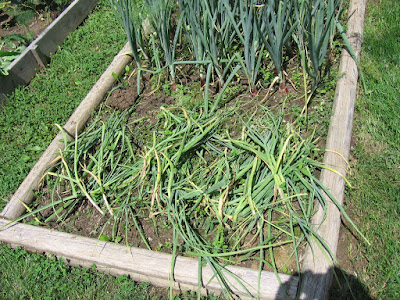 The last set of cole crops is not doing very well.  I set out four sets of cole crops this year, about 18 days apart.  The first three sets were outstanding.  This one not so much.  It was probably the heat wave several weeks ago followed by the sunless cool weather that set them back.  There's a Green Magic broccoli that is forming up a small head. It's leaves are mostly brown around the edges.  An adjacent Aspabroc broccoli  never gave me anything, it went to the rabbits.  The lone kohlrabi has taken entirely too long to size up.  I'm sure it's woody.  Also one for the rabbits.   There's a cabbage tucked under the broccoli that just might give me a head once the broccoli is out. 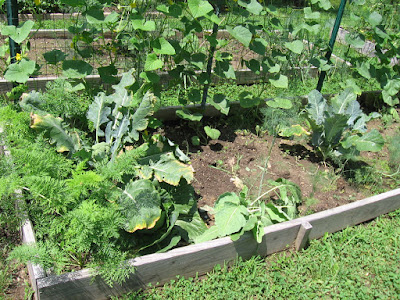 Once the last cole crops and the row of carrots are out, in about a week, I'll seed the bed with berseem clover.  This is a new strategy in the garden.  I'm hoping the clover will fix some nitrogen in the soil and provide rabbit forage in the bargain.

The winter squash are really late getting started, but I can see they are growing.  Some decent weather and they should take off.  This was another experiment with field peas as a cover crop.  I don't know if the field peas really held them back.  I pulled up a lot of the peas to feed the rabbits when I should have been cutting them with shears, and weeds set in, lots of weeds, which I've been pulling up for days.  With some sunshine it looks like the squash is about to shade out the weeds. 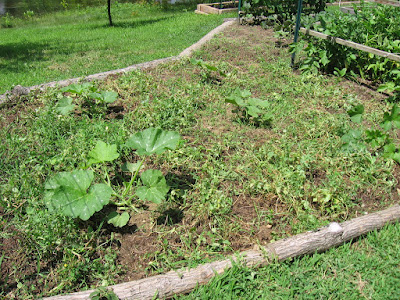 A few more of the Super San Marzano tomatoes have gotten blossom end rot, but most of the newly formed tomatoes appear to be free of BER.  The real problem with the tomatoes, and potatoes, is blight, a result of the cloudy wet weather.  The slicing tomatoes  - Grandma's Pick, Granny Smith and Big Beef - have been more affected than the sauce tomatoes.  I've been removing lower leaves affected with blight and have sprayed the plants twice with Mancozeb.  I plan to spray one more time.  None of the synthetic fungicides are completely safe to use.  I chose Mancozeb because it breaks down very quickly, is not systemic and is effective against blights and rusts. 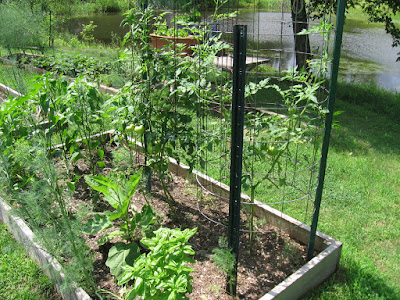 The Big Beef tomato on the right looks skeletal from removal of blighted foliage.  I'm hoping it recovers.

I posted recently about removing flower buds from young plants so the growth would not be hindered because so much of the plant's energy was going into forming fruit.  That strategy seems to have worked well for the pickling cucumbers.  The plants are up to the top of the trellis, and a few days ago there were enough cukes to make three quarts of dill pickles.  It will be about a week before any more cucumbers are ready to pick, and that's what I want, cucumbers that mature in batches for pickling.  Here's an example of a plant whose buds should have been thinned.  It's an Alma paprika with way too many peppers for the size of the plant.  I may try pickling these peppers when they are ripe. 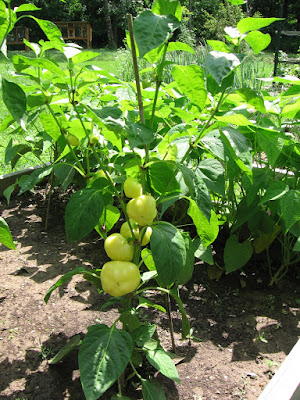 That's where the vegetable garden is at the end of June.  It has been a very productive late spring with a bit of a slowdown in June.  I'm hoping that more normal summer weather will get things back on track.
Posted by gardenvariety-hoosier at 5:59 PM 2 comments:


With the first Calypso cucumbers ripe on the vine, it was time to make some refrigerator dill pickles.  Since a recent post showed the fermentation crock that I bought online you might think I would be eager to start fermenting pickles.  Well, I can’t wait two or three weeks for pickles to ferment vs three days for refrigerator pickles.  Now that I’ve made them for a few years I’ve found out that refrigerator dills are easy and quick.  I think they are better than hot canned pickles which are not crisp, although refrigerator pickles have to be used in one or two months, which has never been a problem.

So the cucumbers were ready, or were they?  This is one of the hardest parts of pickling cucumbers, knowing when to pick them.  One way is judging when they ‘size up.’  That’s another way saying that they have reached or nearly reached full size.  They will grow fast until they reach full size and then not grow or grow very slowly. Problem is by the time you determine that they are no longer getting bigger they can over-ripen.  I thought about picking and pickling these cucumbers yesterday but chose to wait until today.  Here they are, three fine plump specimens, averaging a bit over 3/4 pound, along with the dill weed. 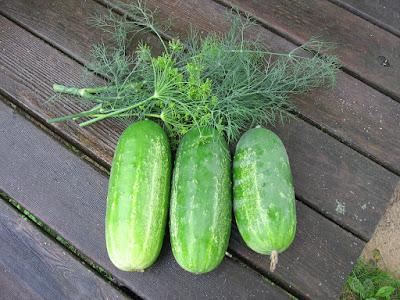 Then I noticed, or remembered, there’s another criteria to use, color.  The Calypso cucumbers start a dark green which develops pale greens streaks as they mature.  These cucumbers were definitely a paler shade of green than they were yesterday.


Making refrigerator pickles is a snap, which I hope the pickles themselves will have.  I use a 50/50 mix of water and cider vinegar.  Each pint of mix gets a tablespoon of salt and a teaspoon of turbinado sugar.   The salt and sugar is added to the water in a pan and gently heated and stirred until it is dissolved, then the heat is turned off.  After cooling awhile the vinegar is added.  This method keeps down the vinegar smell.  For this batch I made 3 pints of pickling mix.

After slicing off the ends the cucumbers were cut into quarters.  Originally I planned to use halves but the cucumbers, averaging over ¾ pound each, were too large for that.  And here is where I saw that they were in fact, a little over ripe.  The seeds have developed too far and the centers are wet.  That means they will be a little soft in the middle and the skin will be a little tough.  Not a disaster, but they could have been picked earlier to have that perfect crunch. 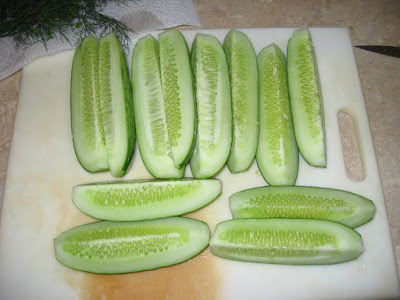 As for the recipe, it’s pretty standard.  I’m not sure exactly how much spices were used in past preparations, but here is what was used for each quart:  One TB mustard seed, one TB dill seed, one teaspoon coriander, four garlic cloves, dill leaves (weed), and one dill flower.  I recall that too much coriander overpowers the other flavors, hence only a teaspoon.  I like all stages of the dill plant in the jar, each one has its own flavor profile, and you really shouldn’t skimp on fresh dill, that’s what makes the pickle.  The three pickles made two quarts of refrigerator dills, with a quart of pickling solution left over for future use. 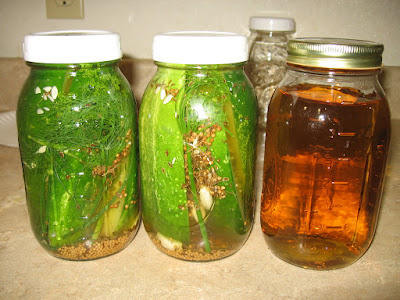 Note, after pickling two quarts I decided to pick the remaining cucumbers that looked ‘almost ready’.  One of them was damaged as it grew trapped between the post and the trellis. The other two made another quart of pickles.  Those cucumbers were just ripe enough.

If I can make these anybody can.  What makes a good refrigerator pickle is fresh ingredients - freshly picked cucumbers and dill.  The rest is easy.

Posted by gardenvariety-hoosier at 5:16 PM 5 comments: