It's over for the summer crops.  The last week has seen a number of nights below freezing.  The summer squash succumbed to the first freeze.  Nevertheless I picked one more squash from the plant that morning.  The beans made it through this frost with minimal damage. 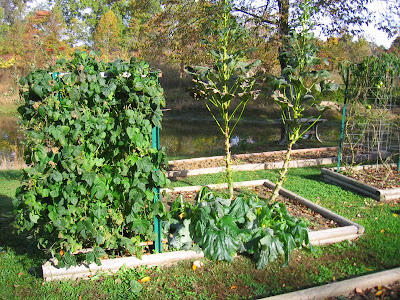 More frosty nights and the rest of the crops were done.  I had to dig up the Silver Queen okra, more like okra trees, as there was no way I could pull them up.  They were about 9 feet long. 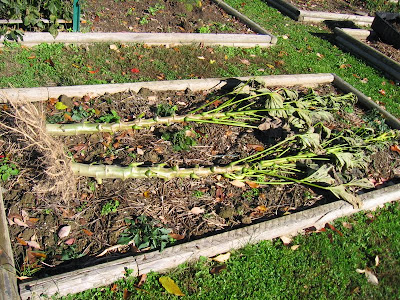 I meant to harvest the last tomatoes before the cold and let them ripen inside.  But I'm a lazy arse and never got around to it.  So they froze on the vine. 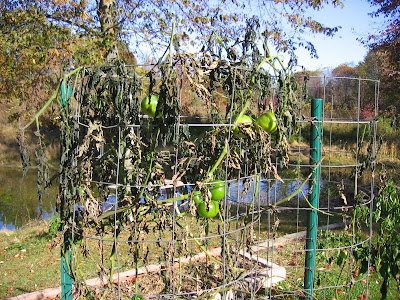 The rest of the New Kuroda storage carrots were pulled up. 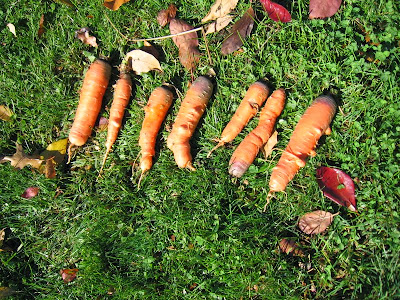 And the spinach for next year is coming up. 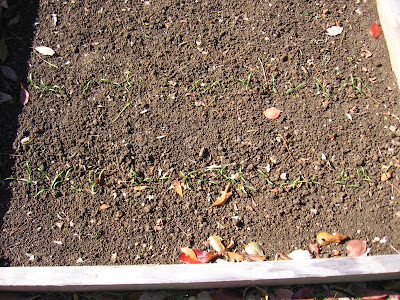 I haven't posted for a week and a half.  I've been getting firewood for the winter.  This year I haven't cut any wood so I had to buy 5 ricks (a rick in these parts is a third of a cord), in other words a single stack 4' high and 8' long.  Purveyors of firewood have to be the most irritating people on earth.  You'd think it would be no big deal - they have wood and a truck, I have cash, let's make a transaction - but they always make it as painful and complicated as possible.  You'd think they were selling Moroccan hashish.  With my daily gripe out of the way, on to the post!

Last week I dug up the sweet potatoes.  This was the first year for them and I did not expect much.  On the barren slope toward the pond I set two badly decomposed compost frames, 2 x 10's three feet on the side, put some soil and compost in them and planted the slips.  I made no effort to dig up the hard clay beneath the frames.  I harvested about 15 pounds, many of them deformed from where the roots ran into the clay.  There's Beuregard, Georgia Jet and Vardamann. 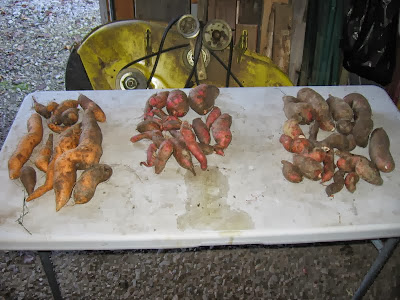 Next year I'll give the sweet potatoes some better growing conditions.

Considering that it is mid-October this week was a decent harvest.  I'm still picking Kentucky Wonder beans and have picked over 30 pounds of beans this year, probably more than I wanted.  The summer squash plant really grew fast after the competing acorn squash was removed, but the squash have grown slowly in the fall weather and many of them rot before sizing up.  This one was a keeper. 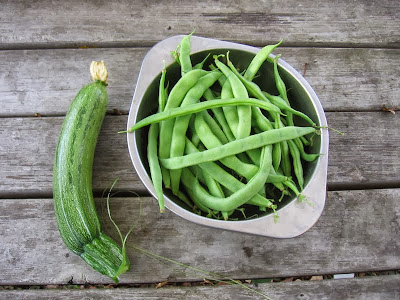 I'm hoping for a good crop of brussel sprouts if the pods will just size up a bit more.  I picked some more buds near the base before they opened up. 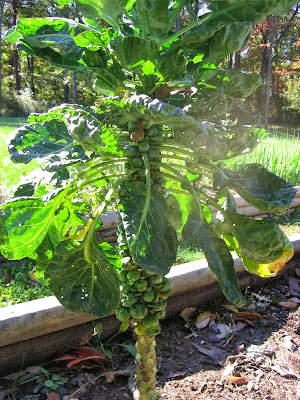 Sunday morning I found a nice sized summer squash, 19 oz, that seemingly came out of nowhere.  There's another one sizing up on this plant that should be ready tomorrow .  This area is supposed to get a hard frost in a few days, so I'll have to pick any tomatoes, squash and beans before that. 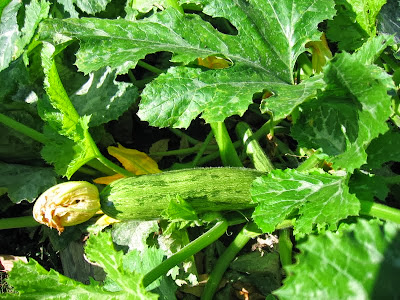 I picked some Parade scallions and a celery bunch from the Earthbox.  I tossed out the rest of the celery.  I'm going to make some tater salad using the scallions and celery, if the center stalks are mild.  Overall the celery was kind of a disappointment.  This was Sunday's harvest.  The pepper is an ancho. 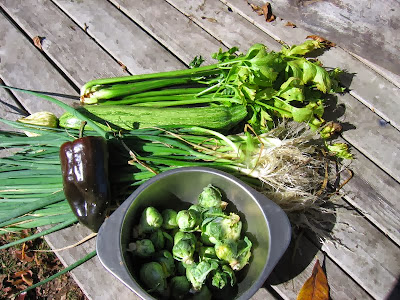 Wait, I'm not through yet!  This morning I caught a catfish from the pond.  This may be the last fish of the year as they are acting like they are ready to go deep and stop feeding, so I thought it was worth a picture.  (I doubt if the fish agreed).  Not as big as some fish from the pond, but at 19 inches it makes two nice filets. 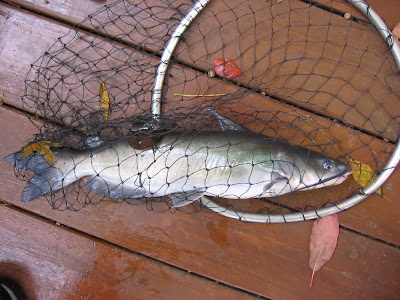 For the week:  celery 7 oz, beans 11 oz, summer squash 26 oz, tomato 4 oz, pepper 4 oz, brussels sprouts 9 oz.  Total for year 279 lbs.  I was hoping for 300 pounds this year but will probably fall a bit short.  To see what other people are getting from their gardens go to http://daphnesdandelions.blogspot.com/
Posted by gardenvariety-hoosier at 4:31 PM 4 comments:

Getting ready for next year, adding space

The growing season is nearly over, and while I'm winding things down, removing spent plants and vertical supports I'm also making some new bed spaces.  This is actually a good time to add a new bed because some of the soil preparation can be done between now and spring.  The laborers are earthworms and they are hard workers.

But first I'm going to talk about my white whale, the levee project.  I've found out the hard way some do's and don'ts of levee maintenance.  A big don't is this:  you can't let bushes or trees of any size grow on a levee.  There were a number of large multiflora rose bushes, the invasive kind, growing on the banks of the levee.  A bush that has a 10 foot diameter crown will not allow anything to grow in its shade, but it will only anchor the dirt around the base of the plant.  What is needed are short plants with fibrous root systems to hold the soil in place.  Like grass.  A torrential downpour last spring showed me the error of my ways.

I started the levee work in the spring, cutting out the rose bushes with a chain saw, and brought in two truck loads of soil.  This fall I brought in two more truckloads and finished the bank repair.  The rest of the soil was put on the top of the levee to fill in the low areas.  I set up a water level to find the low spots.  Then everything was seeded and strawed.  It was  huge job.  Twenty cubic yards of soil were delivered (I held two yards back for other jobs) and spread by shovel.  I've got to believe that this repair will survive any weather Mother Nature throws at it.  The grass is growing nicely. 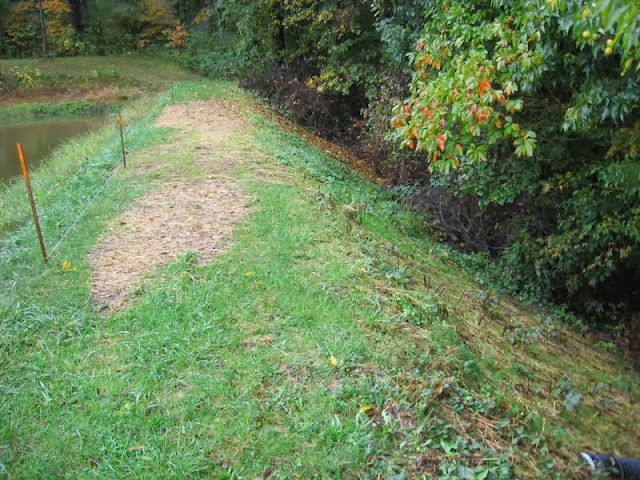 Once I recovered from the levee project I went back to the berry bed.  The bed is just over 16 feet long.  I plant to put in raspberry bushes.  At one end will go either asparagus or rhubarb.  Can't decide.  Once the blocks were set I added a thin layer of compost, some fertilizer and several inches of topsoil, some of that soil I held back from the levee project.  It's sort of a sheet mulch.  After the leaves fall I'm going to top it off with some shredded leaves and set landscape fabric over all of it.  I'm hoping the black fabric will help heat the soil so the worms can do their thing. 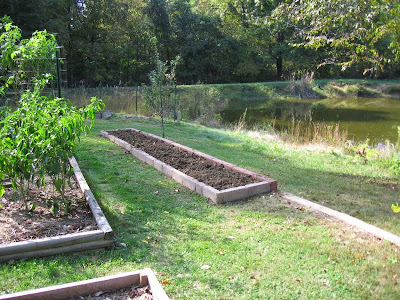 And there's another bed.  The stump of a tulip poplar that I cut down five years ago had decomposed enough to remove.  The tree had built up a large mound of soil around it and I never thought about putting a bed there.  With much of the root system out the mound was leveled (some of the excess soil went into the levee repair).  It's a space where storage crops can be grown, either squash, potatoes or sweet potatoes.  This space goes into the shade early in the fall, but those plants are all done by that time. 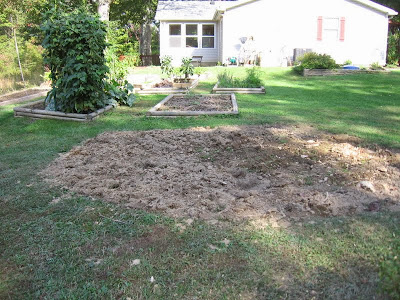 This will start as an open bed while I figure out if it needs to be terraced at the low sides.  I'll put in a sheet mulch using shredded leaves to get it ready for next spring, when it will be planted with winter squash.

The two apple trees I planted last year have grown about two feet this year. 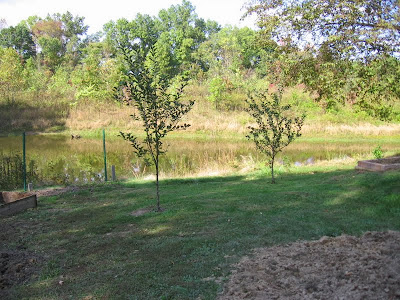 The trees suffered a heavy infestations of aphids this spring, with the ants farming them.  It took several sprays to kill the ants and the aphids went after the ants were gone.  The insect pressure caused a lot of the branches to grow in odd directions.  I'll have to do some heavy pruning this winter, and spray them with dormant oil in the spring to prevent another infestation. 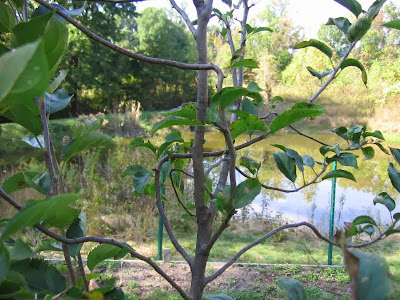 I'm still picking pole beans and there are a few summer squash which should ripen.  There's some parsnip and brussels sprouts still growing.  And some spinach has been seeded to overwinter.  Things are winding down.
Posted by gardenvariety-hoosier at 5:48 PM 1 comment:

There was only one harvest this week.  I should have picked some beans earlier in the week, but there was rain, and back spasms, and a general malaise.  The back spasms were the result of the continuing work on the levee, work that involves lots of dirt moving.  They weren't the kind of back spasms that leave you immobile, they were just bad enough to let me know that I'd better not attempt anything like work or pay a heavy price.

There was rain last week, lots of it. Saturday it started raining in the morning and continued throughout the day and that night.  The rain stopped midday Sunday and I went out to check the rain guage:  3 1/2 inches in 24 hours!  The wheelbarrow collected most of the week's rain: 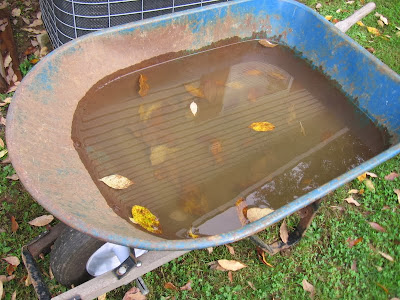 Right now some plants are growing a lot but producing very little.  Once the acorn squash plant was pulled up the summer squash plant grew quickly to occupy the space.  Not many squash though, they are slow to mature and some rot before they are ready.  I might get a few more squash before the frost. 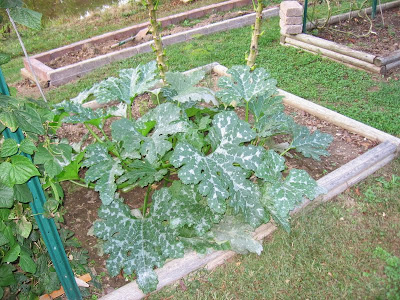 Same with the Silver Queen okra.  The plants are now eight feet tall, but are producing only a few okra in the cooler weather.  I have to use the small ladder to reach them now. 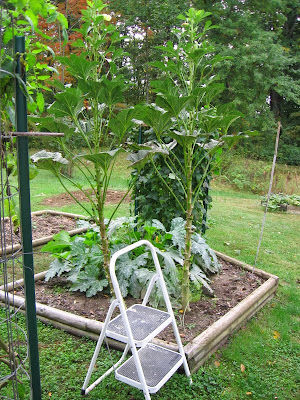 The Millionaire okra in the self-watering containers has been finished for about a month.  I find it amazing that the plants flowered and made a few okra even after all the leaves had died.  I don't think I'll grow okra in SWC's again, they are too tall.  Next year I think I'll try brussell sprouts or peppers.  I'm going to try to reuse the potting mix after it dries. 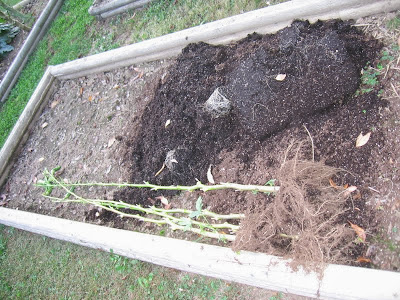 I've been hoping to get just one of the fabled Cherokee purple tomatoes to try.  Early in the summer the plant got Fusarium Wilt bad and it lost the first set of tomatoes.  Then it recovered, grew more foliage and set more tomatoes.  Then a tomato hornworm ate about half the foliage.  Now the recent rains have caused the tomatoes that had a chance of ripening to split.  More like exploding than splitting. 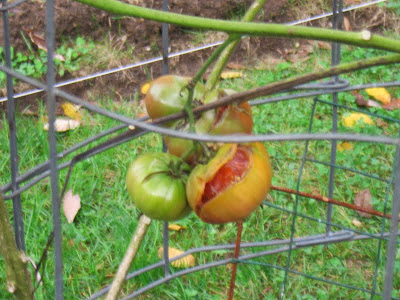 The Kentucky Wonder beans just continue to produce, and the beans are larger than ever.  On Sunday I picked two pounds of them, along with a tomato, a squash and some peppers. 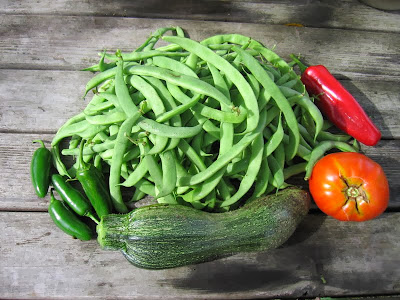 Then I realized I had forgotten to pick the okra: 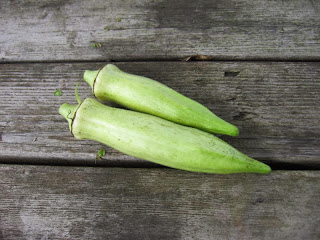 Posted by gardenvariety-hoosier at 3:29 PM 3 comments: