Cover crops in the small garden


About a month ago I combined three garden beds, two of them framed with landscape timbers in an advanced state of decay, into one large bed enclosed by logs.  I wrote about this in this post. 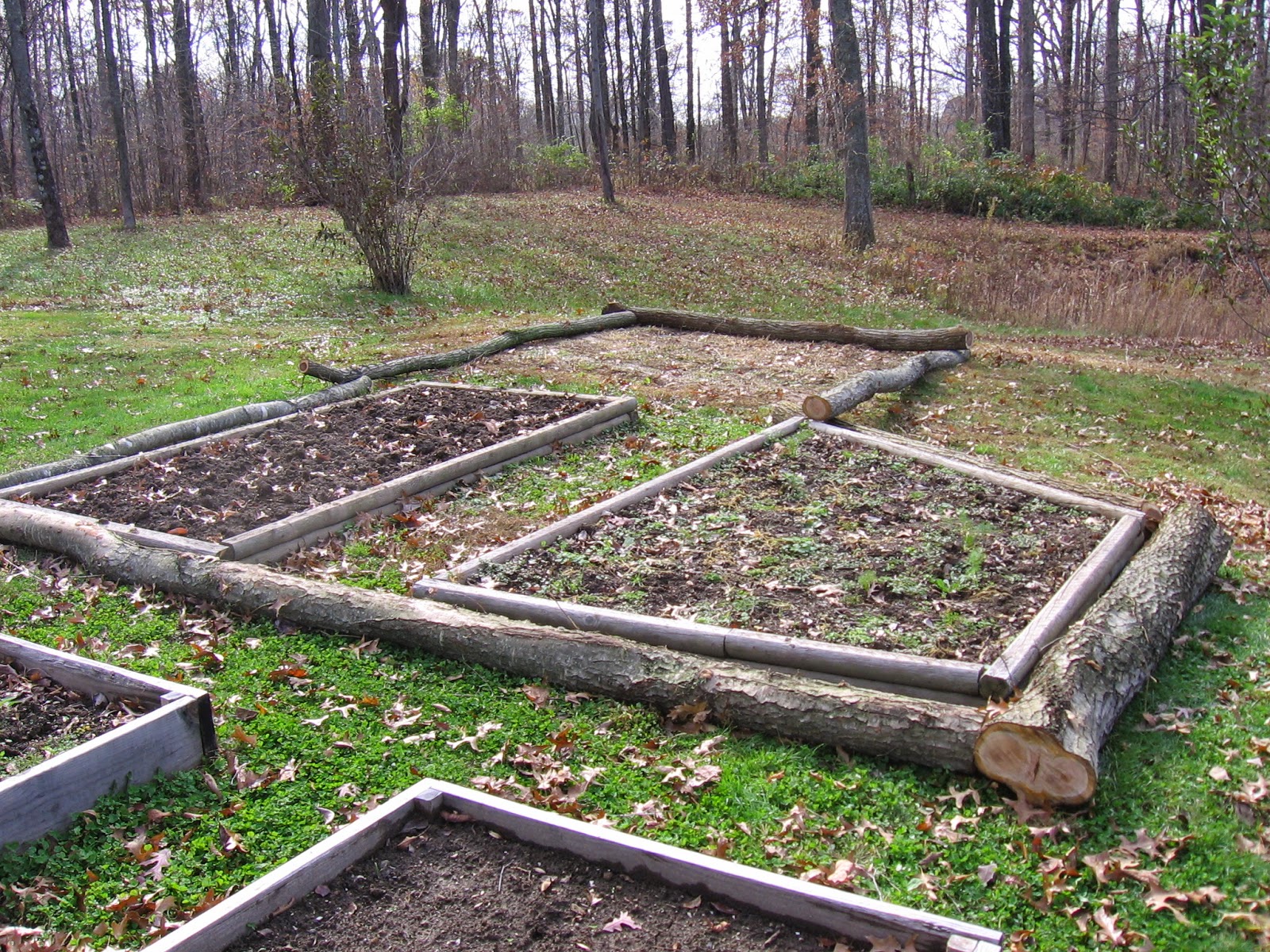 The width of the old beds made it difficult to access crops, and for the last few years I have grown mostly potatoes, winter squash and sweet potatoes in those beds, vegetables that are harvested only once or twice a year.   In the future those crops will all be grown in the new big bed (superbed?) with their places in the bed changing each year.  Combining the old smaller beds makes for a little more garden space by using the paths as well as expanding the perimeter a bit.  The space can also be utilized more efficiently.  Once the potatoes are harvested, the squash and sweet potatoes can be trained over the former potato patch which they will quickly colonize, essentially forming a ground cover.

The vegetable garden is probably as large as it will ever be, given the shade limitations imposed by the tree line on the south side and the slope toward the pond on the north side.  In addition to the big bed there are five framed beds, a perennial bed, and a raspberry bed, together totalling nearly 500 square feet.  With the physical layout more or less permanent I looked over the planting plans from the last few years and found that a three-year rotation could be used.  Yes it would be nice to do a longer rotation but there was no way to make it work, giving the number of beds.  This is a scale drawing of next year’s plan (the paths between beds have been shrunk to fit the plan on the page). It is very similar to the plan for 2012. 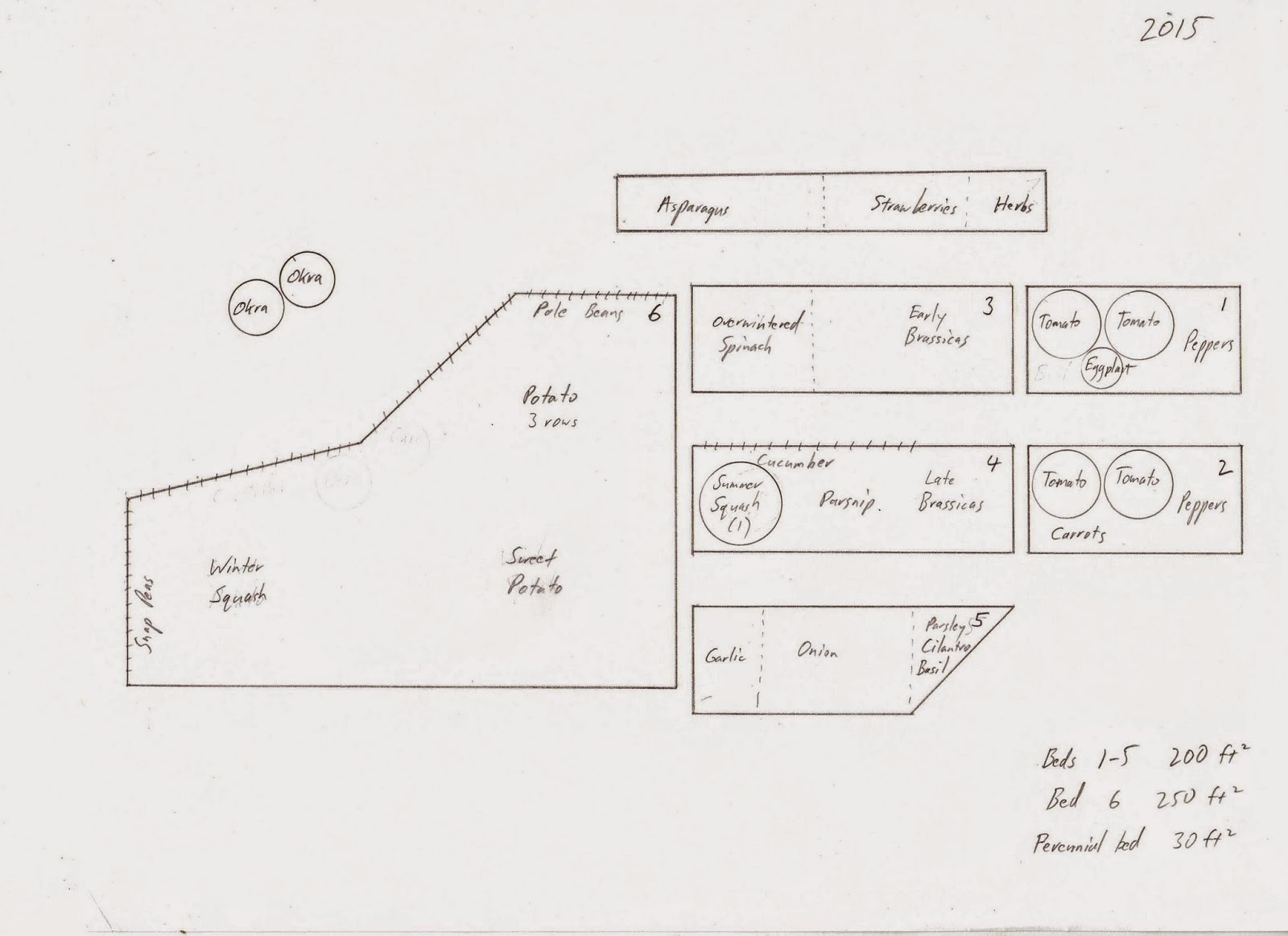 Working on the plans for future rotations got me thinking that I should also develop a strategy for using cover crops.  It certainly seems that a cover crop seeded into a space where the food crop has been removed is better than leaving bare ground exposed to the elements.  A cover crop can produce nitrogen, add organic matter to the soil, protect the soil from erosion, break up the soil with its roots and bring up nutrients, provide forage for livestock, shelter earthworms, and provide food for bees.  That’s a lot of benefits.

Well I tried a fall cover crop a few years ago and the results were not so gratifying.  It was  Johnny’s fall green manure mix, a blend of field peas, crimson clover, hairy vetch, annual ryegrass and winter rye, a typical fall blend as I learned in my recent research.  I seeded the cover crop in the fall and it quickly established a thick green cover of grasses and legumes.  Most of the plants were killed by winter, except the rye and vetch, which began growing again in the spring.  The rye developed a thick turf with an extensive root system.  Problem is, a spring planted vegetable, probably onion or cole crops was scheduled to go in that bed in the spring and the bed had to be made ready for planting.  It took hours of spading, hoeing and tilling to break up the sod and get the soil ready for planting.  I vowed to never again plant a cover crop that would not die completely over the winter.


In order to find the right cover crops I looked at the garden from the perspective of when the beds are empty.  The heat-loving plants – tomatoes, peppers, squash, eggplant, and sweet potatoes – are usually planted in May in this area, leaving unused ground in the spring that I have to weed.  Surely there is a cover crop that can be seeded in early spring that germinates in cold soil, tolerates some frosts, grows rapidly and fixes some nitrogen in the 60 to 70 days it has to grow before the main crop is planted.  It would help if I could leave the cover crop in place and plant the vegetables through it, clearing enough space to plant with a string trimmer and a shovel.  If that cover crop is later out-competed by the main crop because of the cover crop’s low growth habit and poor tolerance to summer temperatures all the better.  It will have done its part and may even suppress weeds in the summer.

You probably see where I’m going with this.  After doing some research on The Google it looks like there is such a cover crop: a combination of field peas and oats.  Both plants will germinate and grow  in cold soil.  For this application, which is a cover crop that precedes a main-season heat loving vegetable, I plan to seed just the peas.  The oat stems provide a scaffold for the peas to vine on, and that combination may be too vigorous for the tender young squash or tomato seedlings to outgrow.  Field peas alone should lay on the ground while the vegetables grow above them.

From the perspective of when crops are NOT in the ground, the second category of vegetables are the ones that are finished and removed in early and mid-summer. I’m thinking of the cole crops, most of which have been harvested by the end of June, onions and garlic, out in July, and potatoes, out by early August.  The potatoes won’t need a cover crop in their new bed since the squash and sweet potato vines will replace them.  That leaves the brassica and onion beds as candidates for a summer seeded cover crop.

After reading an article by Harvey Ussery on summer cover crops I thought that cowpeas were a good candidate to follow these crops.  Cowpeas are very heat tolerant, fix nitrogen, and will die at the first shiver.  I definitely want a nitrogen fixing cover crop, and I want one that will winterkill, just not so early, since the first frost usually happens in mid-October.  Another potential candidate is crimson clover, a commonly used annual cover crop.  In this area, barely into zone 6, crimson clover may or may not be killed by winter depending on the severity, and I wanted certainty that the cover crop will winterkill.

Berseem clover looks to have the qualities I’m looking for in summer planted cover crop.  This clover was used to regenerate soils in the Nile delta.  It is one of the best N-fixers of the clovers, makes large amounts of biomass, produces flowers attractive to bees and will die when winter temperatures go below 15 F (-10 C), a near certainty in this area.  As a bonus it makes a very good forage, something I can cut and feed to the rabbits (and the rabbits will produce manure that goes back onto the beds).  It certainly sounds like the ideal summer cover crop that should stay green until the depths of winter are reached.

I plan to mix berseem clover with oats, both of which will winter kill.  Although the oats do not fix nitrogen it provides added benefits.  The legume/grass combination is often used in cover cropping strategies, as the combination has a synergy that produces more biomass and even more nitrogen fixation than either plant on its own.


There’s one niche category that is also a good candidate for a cover crop, the asparagus bed.   Mr. Ussery seeds oats and field peas around his asparagus in mid-September.   He cuts down the asparagus several weeks later, by which time the oat/pea cover has gotten a good start.  The cover continues to grow in late fall then dies over the winter and leaves a workable mulch over the soil the following spring. This sounds like a great way to protect the soil and fix some nitrogen in the asparagus bed during the dormant months.

Since this is an experiment there is little doubt that the plans will be modified by real world conditions.  But then any new variety of vegetable that a gardener tries is essentially an experiment, so we are used to it.  I’m ordering the seeds from Peaceful Valley Seeds, which offers an extensive selection and good prices.  In addition to the aforementioned cover crops I’m also planning to order some buckwheat, a cover crop that establishes itself very quickly and has a short life cycle.  It’s a very widely used cover crop in the home garden because of its ability to quickly crowd out weeds.  I’m not sure where it will be used but it seems that an application for it will appear in the growing season.

There are a number of other cover crops that may be useful in my garden but for the time being I want to limit my options until I learn more.  Annual ryegrass or millet both winterkill and could have substituted for oats.  Daikon and oilseed radish put down deep taproots that break up the soil and pull up nutrients.  I may try these at a later date but the crop seeds I’m ordering soon will do for a start.  Next season I’ll keep readers posted on the results.
Posted by gardenvariety-hoosier at 5:14 PM 6 comments: