To get the most from a small garden, where plants are put and when they are started matters a lot.  A plant that won’t grow because it was too close to a larger more aggressive plant that took the available sunlight, water, and nutrients – especially if you’ve only got room for one or two of that variety – means that you'll get very little of that vegetable for the season.  It doesn’t take a green thumb to get the most from a plot - I certainly don’t have one - what’s more important is the feedback loop, a written log of what went where when, that helps me make a more productive plot every year.

As I’ve learned the hard way, what looks like a good plan may have a major flaw.  A few years ago in the middle of winter I came up with the annual plan for the beds.  The plans called for cucumbers on a trellis behind (north) of some brussels sprouts.  The brussels sprouts I knew grew about 3 feet high, but the cukes could climb a six foot trellis to get their sunlight. What I didn’t consider was the timing – the brussels sprouts went into the ground about a month before the cukes and were already good sized plants when the cucumber seedlings were set in.  It took a long time for the cucumber plants to climb out of the shade of the brussels sprouts and grow up the trellis.  I haven't replicated that plan since.

Raised beds allow you to forget about planting in rows and just pack the space with plants, at least for larger plants like brassicas.  I usually plant a 4’ x 12’ bed with cole crops and give most of them about a square foot.  Broccoli gets a little more room since it’s a larger plant, and since it’s taller it goes on the north side of the bed.  I’ve never really put much stock in the intensive planting idea where cole crops are planted within inches of each other.  Planted close like that I’ve found that some plants will win and shade out the losers, which end up in the compost bin.

For succession planting I also think about when something will come out.  When space opens up for a new seedling after a plant has been pulled out I will crowd the new plants and the old ones a bit when I know that the older plant will be coming out shortly.


Then there's second plantings.  Many spring plantings like brassicas can be replaced when they are done with another short season crop, like beans or carrots.  This is the brassica bed one month ago. 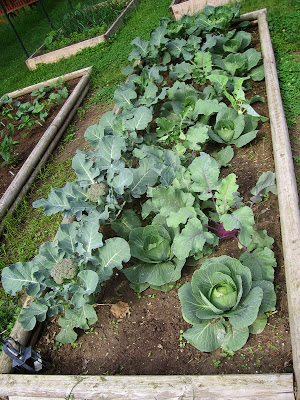 This is the same bed a few days ago.  By mid-June enough of the earliest planted cole crops had been pulled out to leave a block of space for a planting of bush beans.  Now there’s room to plant another patch of bush beans, probably something I’ll do later this week.  There's a volunteer dill in the center of the bed and I'll try to work around it. 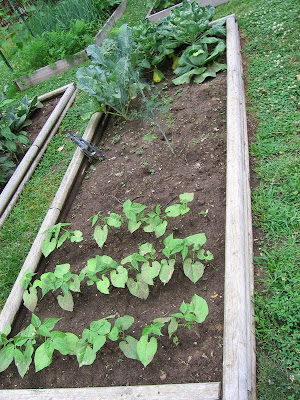 An example of what almost went badly shows the importance of getting the timing right.  Following the schedule made this winter I seeded okra and eggplant indoors on April 24.  Problem is eggplant has very small seeds, slow to germinate and slow to get started.  When the okra had already put out sets of true leaves the eggplant was just a green thread.

In mid May the weather forecast convinced me that it was time to set tomatoes, peppers and okra seedlings out into the beds, yet the eggplant seedlings were still way too puny to go out into the big bad world.  They had to wait about 10 days to be planted and by that time the tomatoes and peppers on either side had gotten a good head start.  Would the eggplant get enough sun to establish itself as a productive plant, or would they end up as dwarf plants that produced nearly nothing?  It turns out that they got enough sun to put on a growth spurt and are are now able to compete with their neighbors.  They are a little crowded but they will do OK.  Another weeks delay and they probably would have been stunted.  I made a note on the schedule to start eggplant a week earlier next year. 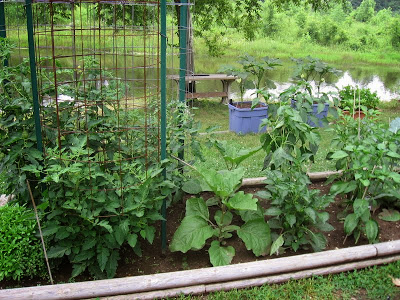 Here’s another example of spacing.  I seeded enough onions to fill a 4’ x 8’ bed.  Instead of putting all of them in one bed this year I planted two blocs of onions in the center of two adjacent beds.  In the picture below one end of the bed was planted in carrots and the other end with the first planting of bush beans – plants that I need easy access to for harvesting.  A trellis is on the north side of the bed with four cucumber plants growing up it.  I can pick the cukes from the back side of the trellis.  The onions in the center will be harder to reach, but when they are ready to harvest they will come out with just a tug.  Another bed is planted in a similar fashion, onions in the center and other plants at the ends.  This approach makes the most of the space available. 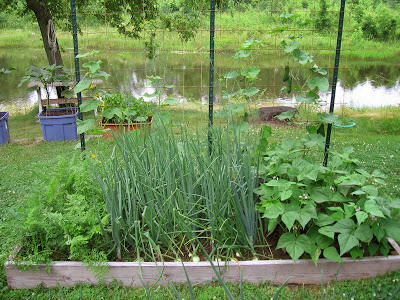 It’s all a process of learning by doing.  I’m still learning.  It sure helps to keep a record of what went right and what went wrong when I make plans for the next season.

Posted by gardenvariety-hoosier at 4:12 PM 2 comments: