Japanese Honeysuckle, or The Invasive from Hell

I haven't posted much lately since there hasn't been much reason to post.  Tomatoes succumbed to blight, a product of the sustained wet, overcast weather, and they have all been removed.  It's also been a bad year for snap beans.  First rabbits, then Japanese beetles, then lately bean beetles, have all taken their toll.  I've been working on the lot adjacent to my property, and one project is the suppression of the Japanese honeysuckle which has taken over a large area across the pond, where it forms a dense mat that has crowded out nearly everything else.  In this picture, some of the honeysuckle is dying or dead from applications of glyphosate. 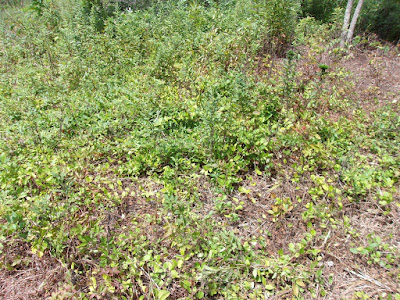 If it was just another weed I really wouldn't care.  When I moved here 10 years ago the lot was an overgrown pasture, with weeds taller than I am, with some saplings growing among the weeds.  Since then the trees have established themselves on most of the lot and many of them have reached a nice size.  But where the honeysuckle has taken over the trees are small and stunted looking.

Japanese honeysuckle will circle around a small tree and literally strangle it.  The vines are very tough and prevent the tree from growing.  The vines were embedded in the trunk of this small dogwood.  I removed them but I don't think it will make it, the damage is too great and the leaves are looking droopy. 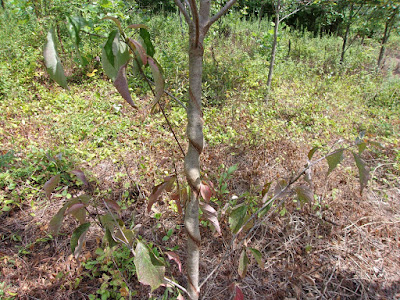 The first thing I did was remove any dead trees or saplings that looked like they had no chance of making it.  I cut down the trees with a chain saw or loppers, then tried to pull out as much honeysuckle as I could along with the tree.  Fortunately the vine uproots well, at least the smaller ones.

The next step was to pick the trees that looked like they could be saved and clear them of the vines.  Then I lopped off the lower branches so the vines would not have an easy way up, and pulled up as much honeysuckle as I could around the tree, which is hard work, to say the least.

The next step was to spray glyphosate (Roundup) on the areas that I had cleared.  I used a generic product which does not have any additional chemicals, since I want to avoid any residual effects.  Glyphosate itself is derived from the amino acid glycine, and it decomposes quickly upon exposure to air and sunlight.  After the initial clearing around the trees I kept expanding the area to be cleared, once I realized that the best approach was to kill as much of the honeysuckle as possible.  In this photo there is still a lot of honeysuckle that is not quite dead. 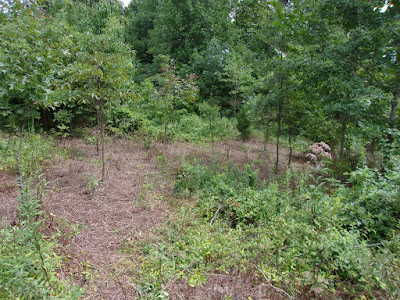 When at least some of the honeysuckle has been pulled up, the remaining vines died quickly from the glyphosate.  Sprays have been less effective on healthy plants that weren't assualted.  Yesterday I went over the area with a brush cutter to knock the remaining vines back some more. The mats of dead vines also present a fire hazard in dry weather, and I've been taking large balls of uprooted vines to a burn spot and burning them.

This is the view from the deck at the area that's been cleared, cut and sprayed.  Next week I plan to make one more application of glyphosate, then in a few weeks I will dig up some saplings from the woods next to my house and transplant them into this area.  The best weapon against this plant is shade.  Once the trees are large enough to throw some shade, growth of the honeysuckle is slowed substantially.  Until then, it's a battle. 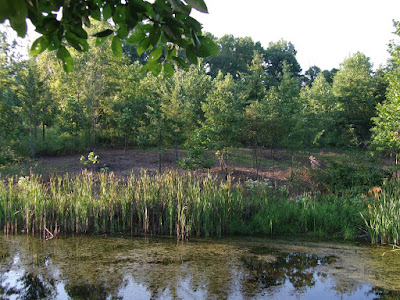 Posted by gardenvariety-hoosier at 10:36 AM 2 comments:

A lot of plants aren't doing so great this year, like green beans.  Between the rabbits and the Japanese beetles, the beans are having a rough go of it.  But the Green Tiger zucchini is doing great, in fact I've had to throw a few oversize squash into the compost bin.  Just can't keep up, and it's only one plant.  Eggplant and okra aren't all that healthy this year, but I'm still getting enough to make an omelette every few days.  Eggplant in eggs.  Who knew?

This area got 3 to 4 days of rain/drizzle/cloudy weather, and blight spread through the tomatoes like wild fire.  I removed the Big Beef and Granny Smith (no great loss) tomato plants and trimmed the rest aggressively.  Even the Mountain Magic and Plum Regal plants, which are blight resistant, look bad.  I don't know how much longer tomatoes will be available.

Today I made the second batch of salsa this year.  I picked about 15 pounds of Plum Regal and Health Kick tomatoes.  The Plum Regal seem like they never want to ripen, and they retain a substantial green core that has to be dug out, or more accurately, I prefer to dig out, since I'm picky about my salsa.  I prefer the Health Kick tomatoes for flavor and quality, and they don't seem to have blight any worse than the Plum Regal. 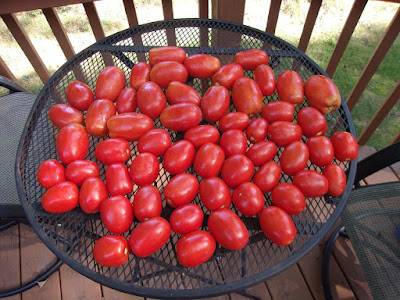 The sweet peppers, Carmen and Senise, were roasted on the grill for the salsa.  After removing the skin and seeds, the peppers are blended into the tomato base. 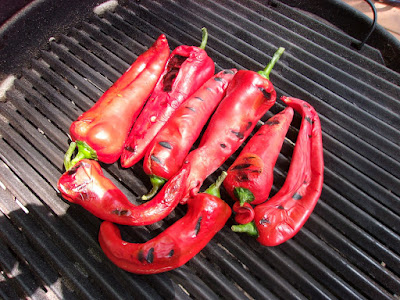 Heat came from Bulgarian Carrot and Chenzo peppers.  I used more this time, as the last batch was deemed insufficiently hot.  The Bulgarian Carrot peppers have a fantastic flavor if I can get past the heat.  The one knock on them is that they have a tough skin. 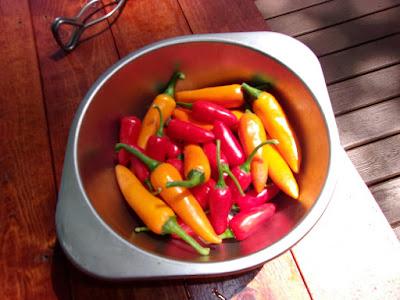 To see what other people are growing, head on over to Our Happy Acres.
Posted by gardenvariety-hoosier at 4:22 PM 4 comments: