I'm calling this the first real harvest of the season, because there was some variety to it.  The first cole crop was picked, a Kolibri kohlrabi: 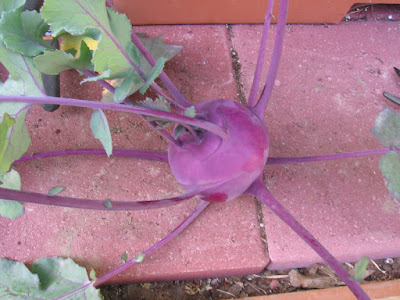 And Tribute strawberries.  This picking was nearly a pound: 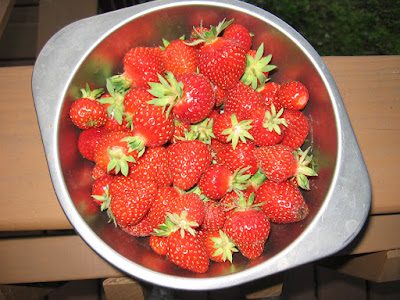 The overwintered spinach was a real disappointment this year, with the leaves turning brown.  Good thing I planted a row of spinach this spring.  Most years the spring-planted spinach fails to produce.  This year I planted a new variety, Reflect, a semi-savoyed type.  It is supposed to be an early maturing spinach.  I picked a two heads this weekend, along with more strawberries, 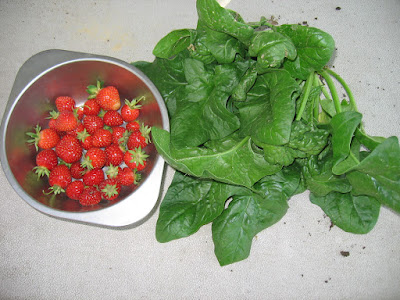 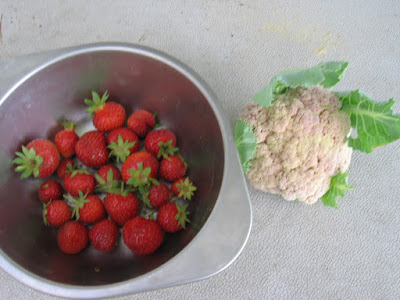 There are three spinach plants left.  It's amazing that they haven't shown any signs of bolting yet.  Since today was quite warm I think I'll pick them tonight.  And there's a head of broccoli that is just about ready to pick. . . 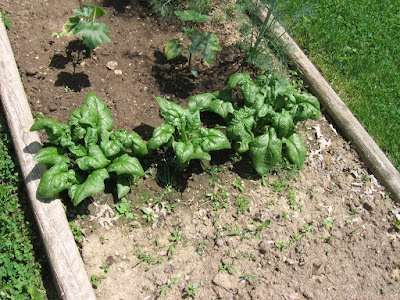 To see what people are growing head on over to http://www.ourhappyacres.com/
Posted by gardenvariety-hoosier at 5:21 PM 7 comments:

I bought new charcoal grill a few weeks ago, the old one had rusted out to the point of uselessness.   When I was at Menards, a Midwestern lumber retailer, I noticed this Char-Broil grill on display and was intrigued by the design, and what they meant by ‘Tru-Infrared.’  After doing some research on The Google and watching some videos of the grill in action I decided to buy it.  Today I fired it up to break it in.  Later that evening  fired it up again and cooked some country-style pork ribs. 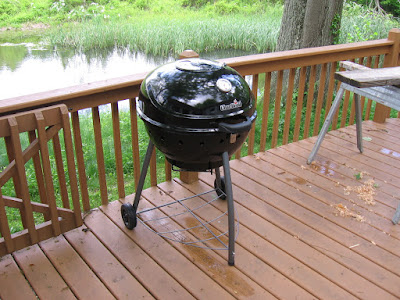 Charbroil came out with this grill in 2015.  The first thing you should know about this grill is that, other than it’s kettle shape,  it is not like a Weber, which is considered the benchmark of kettle grills.  It is engineered to work in a different way.  First there is no control of the combustion air.  Air enters through ports in the side of the kettle and is deflected downward by the sides of the charcoal tray,  baffling the intake air and mitigating the effects of wind gusts.  Charbroil copied this system from a European grill maker, Dancook, after it bought the company.  You control the temperature by starting with a known amount of charcoal, placement of the charcoal, using zones, and adjusting the vents on top of the grill.  Even if the vents are fully closed the grill is designed to vent some smoke out the back of the grill.  The hinged top makes a sort of visor in the back that covers an opening so the smoke can escape.  It looks rainproof and makes me think of Darth Vader. 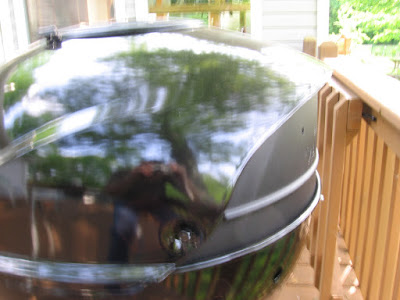 Charbroil claims that flare-ups are uncommon with this grill.  The reason is the design of the cooking grate, a series of pressed metal V’s coated with porcelain enamel.  This is probably the most expensive component of the grill.  Little of the cooking area has direct exposure to the fire and the limited direct exposure to the flame reduces convection, which can carry away moisture.  Before this grill came on the market Charbroil was using this same grate on their gas grills, which are also called ‘Tru-Infrared.’    After watching videos of the Charbroil grill cooking hamburgers in a side-by-side comparison with a Weber grill it sure looked like this design reduces flare-ups. 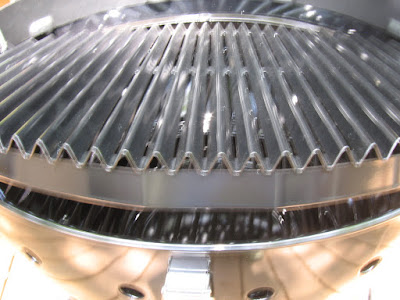 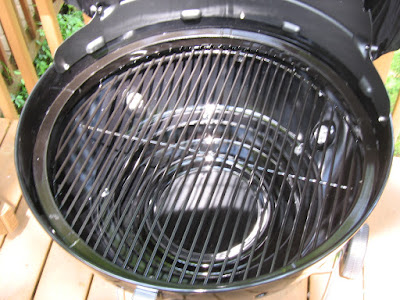 Assembling the grill, I was impressed by the overall fit, finish and thoughtful design.  My sense was that the engineers at Char-Broil really worked out the details of the design.   The assembled components make a sturdy product that gives the impression that it will last.  The paint work looks very high quality, smooth and uniform.  A real bonus is the hinged lid.  I don’t like taking off a large kettle lid and looking for a place to put it.  Hinged lids are awesome.   Well thought out, well executed, the only question was would it cook? 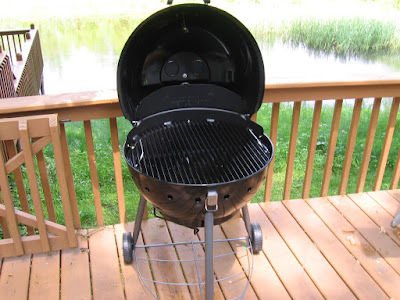 Before attempting to grill meats I first took the grill on a trial run.  Well, a non-cooking run since I made use of the heat to season a cast iron skillet.  Since this is a more serious grill than the old one I also bought  a charcoal chimney to get a uniform start on the coals.  Sixty briquettes were counted into the chimney and a fire started with the help of a splash of charcoal lighter fluid. 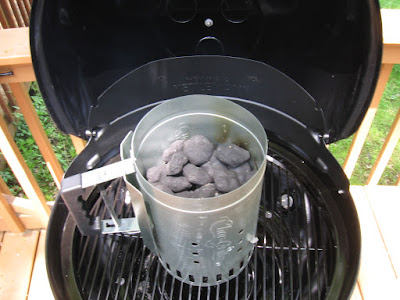 After about 20 minutes the charcoal was released onto the grate.  The cooking grate was set over the hot coals and the lid was closed, with the vents on top shut.  After ten to fifteen minutes the temperature inside the kettle reached 450 F.  The manual advises that the temperature at the cooking surface is likely about 100 degrees higher than the thermometer reading.  They also claim that this arrangement of charcoal will bring the temperature, according to the thermometer, up to 500 F.  It was a very windy day which probably kept the grill from reaching a higher temperature. 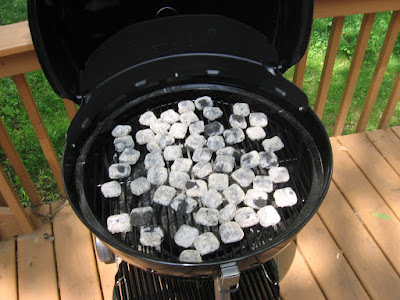 For hot grilling of steaks and burgers Char-Broil recommends 50 briquettes (the chimney can be used to measure the charcoal by noting the level of different counts of briquettes).   I used a few more because of the skillet being seasoned.

I went into town, and when I got back a few hours later the inside of the grill looked like this.  The charcoal was completely consumed leaving only ash.  Nice.  After emptying the ash pan it was time for the real test – actual cooking. 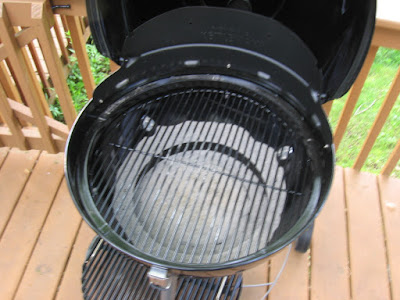 The meat of choice was country-style pork ribs.  This cut most likely goes by several names depending on your location.  I don’t know if they are technically ribs.  The cut is from the shoulder area.  It’s one of those cuts that is best cooked on a grill.  The pieces were marinated overnight in Stubb’s pork marinade.  Country-style ribs require a slow cook, about 45 minutes.

Cooking ribs on the old grill was always problematic.  The fire was always a little too hot and I had to move the pieces around a lot.   Char-Broil’s guidance for cooking whole chicken was to ignite 60 briquettes then push them out to the edge of the tray to make a ring, then put the meat in the center, not over the coals.  This method looked like the best strategy for cooking the ribs.   The necessary charcoal was ignited in the chimney starter.   Once the coals were nearly ashed over they were released onto the grate and pushed out to the edge of the grill to make a ring.  After setting up the charcoal in “the ring of fire” I added some apple wood chips to the coals for flavor. 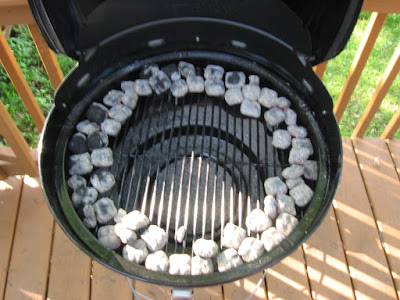 The ribs were flipped at 25 minutes then cooked for another 20 minutes.  By that time the temperature was beginning to fall off a bit.  You can get some temperature control by moving the meat from the center out toward the edge closer to the charcoal.  One piece that was thinner than the others was kept in the center so it would cook a little slower, so it doesn't have the nice char marks of the other pieces.  How did they turn out?  Fantastic.  The meat was completely cooked even near the bone, moist, with a wonderful applewood flavor.  Effort was minimal.  All I had to do was flip the meat midway throught the cook and rearrange the pieces a little. 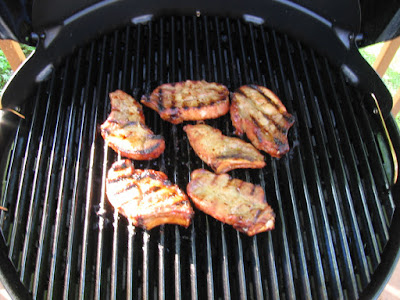 I’m very happy with the performance of this grill.  Compared to a traditional kettle grill it may require a little more initial effort  to develop and record charcoal strategies that are best for the food you are cooking, but once mastered the rewards seem to be well worth it.  Next I will attempt to grill rabbit, which will require a bit longer cook time and will be more challenging.  After that I want to try grilled pizza.   I’ll keep you posted on the results.

Posted by gardenvariety-hoosier at 11:55 AM 4 comments: