This year the warm weather is ahead of schedule.   Many days in April have been more like summer than spring, and the trees are leafing out about two weeks earlier than normal.   In my small plot I have been playing catch-up now that the main work of remodeling the kitchen is finished.  In fact I'm a little surprised that things are doing as well as they are.  It helps that I've been doing this for a few years now, and while methods are still evolving much of the work is like 'falling off a log.'

So here's a quick tour.  First there's the big bed, the bed that grows squash, sweet potatoes and potatoes.  The potatoes were planted a week ago, where the bare soil is, and the sprouts should appear any day now.  The remainder of the bed was seeded with a cover crop of oats and inoculated field peas, which have really taken off.  I've pulled up of a few of the pea plants and checked the roots.  They are covered with root nodules, which shelter nitrogen-fixing bacteria. 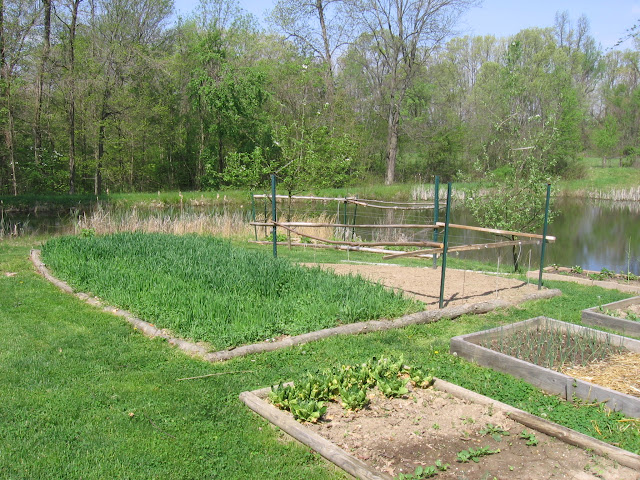 The cover crop is growing like crazy.  Every morning and evening I take the snips to it and cut off enough to fill a container for the rabbits.  The doe had a litter of kits a week ago and a big appetite.  Both the buck and doe are completely crazy for this, especially the peas.  The doe jumps at the greens as they are tossed into her pen and nearly bites my hand.  So the cover crop has worked out well, adding nitrogen to the soil and providing a food source for the bunnies.  At the rate it grows I think it could support another doe and her litter.

The front bed in the next picture grew the overwintered spinach.  For some reason the spinach is not so good this year, but once the outer leaves are discarded there is still some good spinach to be had.   This bed will be planted with summer squash, eggplant and okra in few weeks.  There are some really nice dill plants that self-seeded and I'll have to be careful not to harm them when the summer crops are planted. 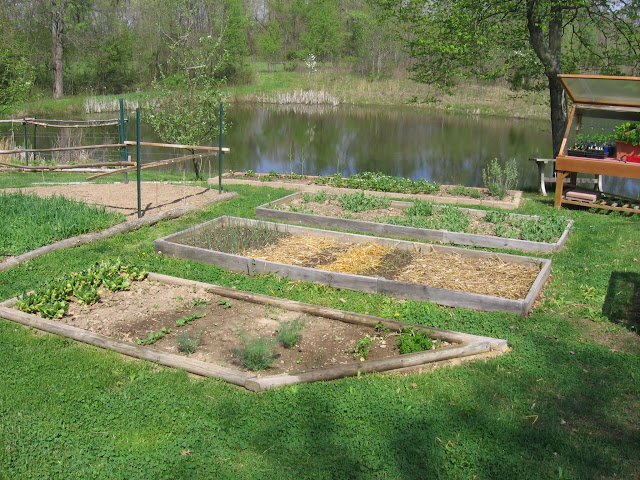 The second bed has been planted with onions, carrots, beets and parsnip.  There is still room for a few more rows of beets and carrots.  The third bed will get tomatoes and peppers.  Some field peas planted last year survived the winter and I'm happy to let them grow and add nitrogen to the soil.  The bed in the back is a perennial bed, with asparagus, strawberries and herbs.

There are two beds for cole crops.  Cutworms have been a problem, killing two broccoli plants in the same spot and damaging other plants.  I sprayed the stems and surrounding soil with Bt and that seems to have stopped them. 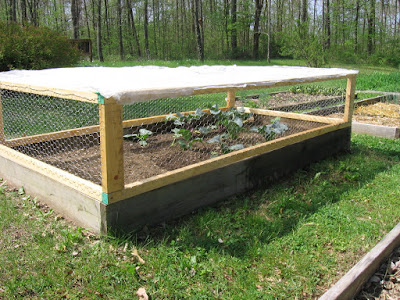 Anise fennel is growing in a homemade SWC. The first time I tried growing fennel in a SWC I tried to grow eight in a single container and the results were disappointing.  This time the container gets four plants. 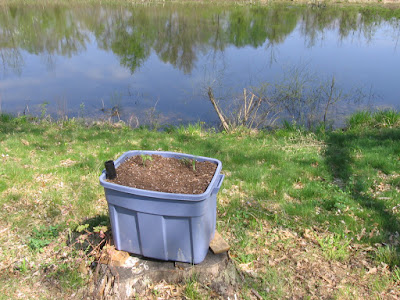 The mobile cold frame has lettuce growing in an Earthbox.  I'm sold on container-grown lettuce.  It grows really well and stays clean.  Pepper seedlings and brassica seedlings are growing in the trays.  Most of the pepper seedlings were purchased at the local greenhouse and repotted to larger pots. It really looks like there will be no more frosts this spring, but if there is a mild frost the cold frame will hold temperature well enough to stay above freezing.  A hard freeze and the peppers go inside. 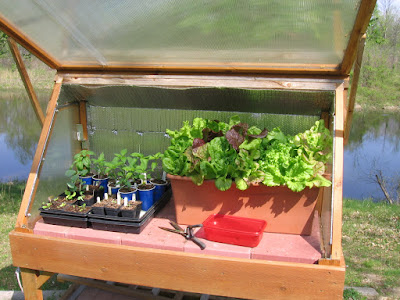 Tomato, okra, eggplant and cucumber seedlings are growing inside under the lights.  With one light unit and the cold frame there is just enough space to grow everything.

Lastly there's the raspberry bed, flanked by the apple trees.  Both the Golden Delicious and the Fuji tree produced a lot more flowers than last year.  Most of the flowers have dropped now.   Looks like there may more than two apples this year. 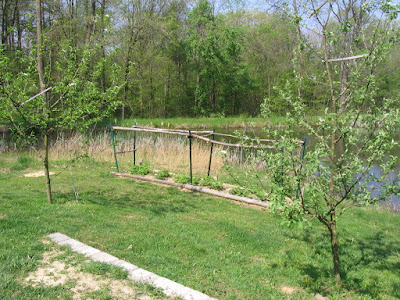 That's the walkabout folks.  Hope whatever you are growing is doing well.

Posted by gardenvariety-hoosier at 6:45 PM 4 comments:

Today I harvested the first asparagus spears.  The roots were planted in 2014.  Last year the first spears appeared on April 8.  Nothing was picked last year, their first full year.  With the mild winter I expected the first spears to show up earlier than last year.  Maybe it was the cold spell in April, but the asparagus showed up later this year.  At any rate they are here, and I can't wait to try them this evening. 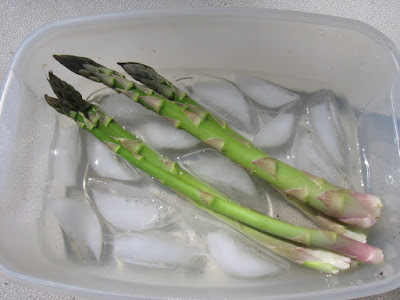 There's been a lot of work to do in the garden this week.  Two of the raised beds were tilled up for planting.  I was pleasantly surprised by the tilth of the soil.  All I had to do was break up the soil with a hoe, remove the weeds and rake it smooth.   In years past it was necessary to spade over the beds then break up the clay clods with a power cultivator.  It looks like the organic content of the soil is finally sufficient to prevent the clay from 'clotting' up.

I prepped the two beds in the center of the picture.  With temperatures near 80 F, the soil surface of one bed was already dried after the second bed was prepped. 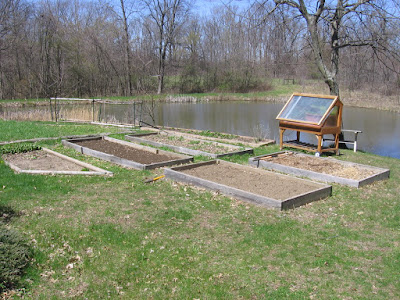 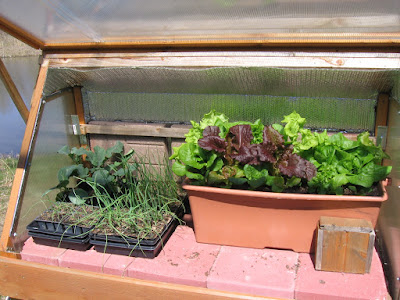 The lettuce is producing a regular supply of greens now.  Soon I'll need to start another SWC.

After a hiatus last year parsnip is back in the planting schedule.  I seeded a 4x4 section in parsnip. 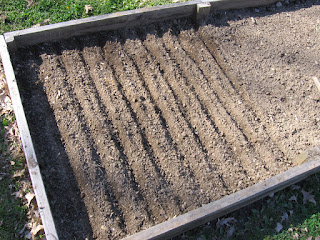 The first set of brassicas was lost to a triple whammy of storms, mole damage, and finally rabbits, which administered the coup de grace.  So I built a frame to go over the raised bed to protect the new cole crops.   Chicken wire is on the sides and Agribon row cover was stapled over the top.   Should keep the bunnies out. 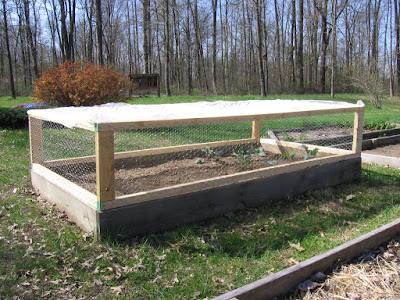 Today the large bed got the treatment.  It's got a pretty good cover of oats and field peas growing on it.  Most of this bed will be planted in squash and sweet potatoes, but that's nearly a month away. 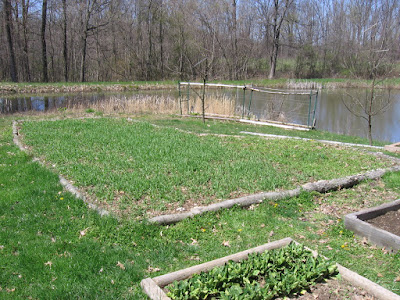 About a third of this bed was spaded over and cultivated for potatoes, two rows of Red Pontiacs and one row of Kennebecs. To see what other people are growing head on over to http://www.ourhappyacres.com/
Posted by gardenvariety-hoosier at 4:48 PM 3 comments:

This is a big week for me.  After over six months of work the kitchen remodel has birthed a fully functioning kitchen.  With a sink, running water, a dishwasher that cleans dishes all by itself, in other words it actually works.  No more washing dishes in the bathtub, and eating deli potato salad and grilled chicken.  This is the recently completed section. 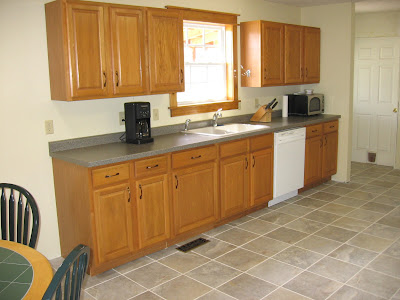 The sink is what I like the best.  It's a granite composite sink that has different sized bowls.  The large basin is large enough hold a frying pan, something the old sink could not do. 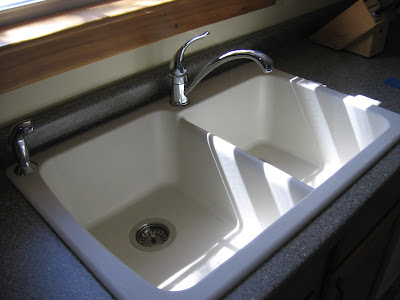 The drain hookups were a pain since the drain line is directly behind the disposal.  You'd think that Swan would offer a mirror image of this sink but no.  Fortunately everything fitted.  I'm installing an undersink filter on the cold water line, just have to get some fittings and lines.  The house is supplied by well water which should be clean, but why not have something to remove any organic compounds that find their way into the aquifer? 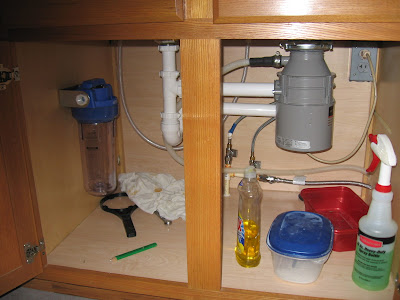 Here's a look at most of the kitchen, showing the floor tiles.  It's an odd floor plan, with the traffic from the front entry going straight through the kitchen then into the rest of the house.  Nothing I can do about that, but the new layout is way more functional and efficient compared to the old one.  The hallway still needs work. The new kitchen has space for dining, sort of a nook.  The old layout had no real place to put a table. The window isn't in yet.  Later this week I hope to install the window, now that the weather is getting better. 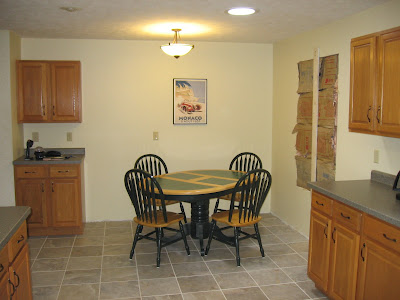 The kitchen is functional but certainly not finished.  In addition to the window, there is baseboard and casing to install.  The doors in the hallway have to be cut down so they can clear the tile floor, the top of the wall cabinets will get a shelf and some sort of molding,  and I have to fabricate new thresholds for the doors in the hallway.  At least there is no urgency to do this, not the kind that one has when a kitchen has no running water.
Posted by gardenvariety-hoosier at 4:22 PM 1 comment: