This is unprecedented. It's the last day of October and yesterday I harvested these peppers - four ripe Carmens and some Jalapenos. 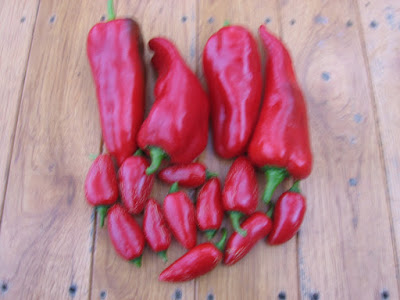 The peppers were roasted on the grill that day.  After deskinning and deseeding they'll be frozen for use later.  There are also a number of ancho peppers that are beginning to turn red.  With no frost predicted in the ten day forecast, with a little luck I'll get some ripe anchos for roasting in a week or so.

To see what other people are getting from their gardens, head on over to http://www.ourhappyacres.com/
Posted by gardenvariety-hoosier at 10:35 AM 4 comments:

It's late October and this area has not yet been subjected to a freeze.  In fact the weather, with the exception of a few bouts of heavy rains, has been incredibly nice.  The trees are just beginning to change, the winter squash are still blooming and the pepper plants are still producing.

The second batch of winter squash was harvested yesterday from the screen on the right.  They have been curing in the sun for about ten days.   There are still more squash that I have left on the vine or are curing on the remaining screen.  The squash on the vine still looked a little 'green' and since the vines looked healthy, they were left to ripen.  That's nearly thirty pounds of Teksukabotu and twenty four pounds of Metro Butternut.   The largest Tek squash weighed in at over five pounds.  Looks like I'll be making squash soup.   So far this year I've harvested sixty pounds of Butternuts, thirty-three pounds of Teksukabotu, and twelve pounds of Golden Nugget. 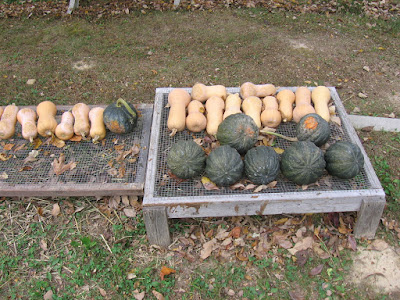 It's always been a challenge deciding when to harvest winter squash.  A general rule thumb is that it takes seven to eight weeks for a squash to fully mature so it's flavor and sugar content is at a maximum.  About the third week in August I begin removing any newly set squash, on the assumption that the first frost will happen in mid-October, although a few sneaked by me.  You begin to notice indications from each variety of squash that indicate ripeness.  The Teksukabotus develop ribs as they ripen, and the green color loses to black. The Butternuts also change color somewhat.  I also look at the color of the stem.  It should be losing the greens and turning to brown.

The peppers are still growing.  Actually they are loaded with green peppers that will never ripen in time.  I harvested a Mosquitero ancho, a Jimmy Nardello and a few ripe jalapenos.  On the plants there are several Carmen and ancho peppers that are ready to pick.  I plan to roast them on the grill in a few days.  Many of the serrano and jalapeno peppers were left to rot on the vine, since there were no tomatoes with which to make salsa. 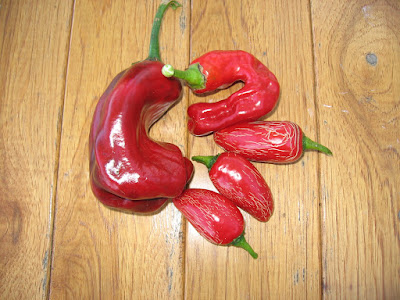 To see what other people are growing, head on over to http://www.ourhappyacres.com/ and take a look.

Posted by gardenvariety-hoosier at 10:43 AM 5 comments:

There are still a few green fresh vegetables to be had from the beds.  Very few, but better than nothing.  The summer squash, planted mid-summer, is still making a few squash, and losing just as many as the end rots away.  At this time of year the garden doesn't get enough hours of sunlight to ripen much of anything. 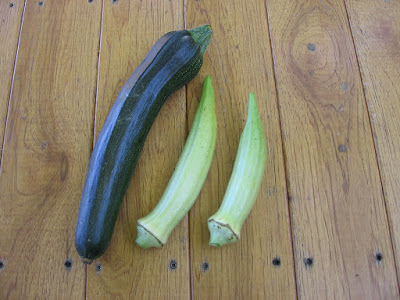 The lone Silver Queen okra plant is now over eight feet tall.  Like the summer squash it is producing at a trickle. 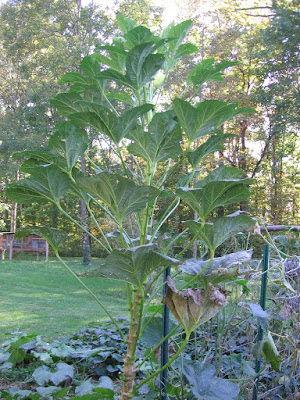 Last week I picked a small batch of beans, enough to make a bean stew, but they are nearly finished also.  It's not over though, there are still a lot of winter squash to harvest.  The squash on the screen are about half of the total squash to be had. 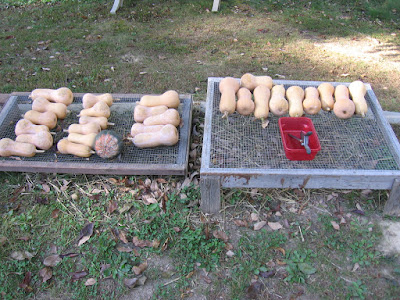 The squash on the left were picked about ten days ago and have been curing in the sun, so they were ready to bring in and weigh - just under forty pounds.  The squash on the right were picked a day ago.  Most of the Teksukabotu squash are still on the vines, which are still green, so I'm leaving them for now.  Along with the Golden Nugget squash I've harvested over fifty pounds of squash, and expect the total harvest to be in excess of one hundred twenty pounds.  Quite a year for squash, which makes up for the bad year for tomatoes.

The peppers have done well this year.  They just keep making more peppers, even though there is no chance they will ripen.  This Jimmy Nardello plant is full of green peppers. 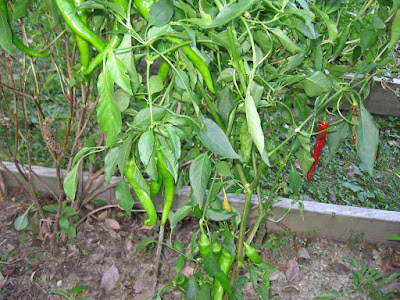 Sunday I planted the bed for overwintered plants.  Around the beginning of December a plastic greenhouse will be set over the bed.  This year I put in a row of bunching onions, a row of winter lettuce mix from Pinetree, a row of mache, and three rows of spinach.  Garlic will be planted later this month.  The mache and bunching onions are new for me. 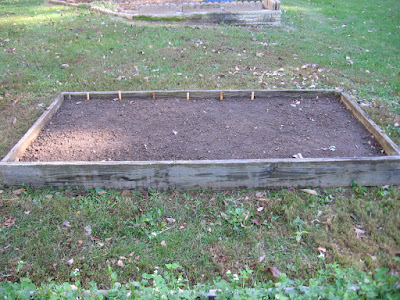 To see what other people are growing head on over to http://www.ourhappyacres.com/
Posted by gardenvariety-hoosier at 2:31 PM 4 comments:

Lately I've been working on the old fence line between the yard and the pasture.  The fence is no longer dividing anything and what's left of it needs to be removed.  Like many abandoned fences it became the start of a wooded corridor.  There are a few large trees near the fence, in fact a large white oak simply engulfed the fence so the old fence appears to go right through the tree.

In 2008 a large sugar maple came down in a storm.  The tree split into three equal forks about chest high, and all three forks came crashing down.  The base of the tree was hollow, so hollow that I was amazed that the tree stood as long as it did.  After eight years this is what's left. 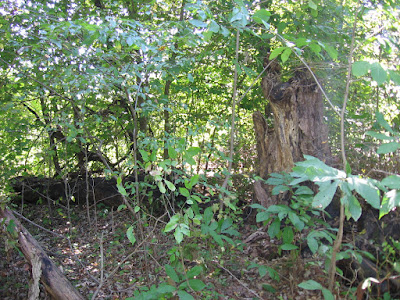 The loss of the tree opened up the area to sunlight and numerous saplings sprang up around the tree.  A few weeks ago I noticed that a number of paw paw saplings were growing in a patch near the stump.  I spotted a few paw paw fruits on the branches.  I don't know if any readers have ever tasted a paw paw.  I found some a few years ago while hiking and found them indescribably delicious.  At any rate the thought of eating ripe paw paws motivated me to remove any other tree species from the patch and let the paw paws have it to themselves.

The paw paw is an understory tree, usually growing beneath the giants.  I think it's very attractive.  It has large deeply veined leaves. 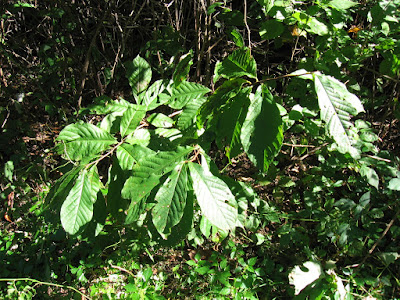 The largest of the paw paw saplings looks like it is well on it's way to becoming a tree, about twenty feet tall. 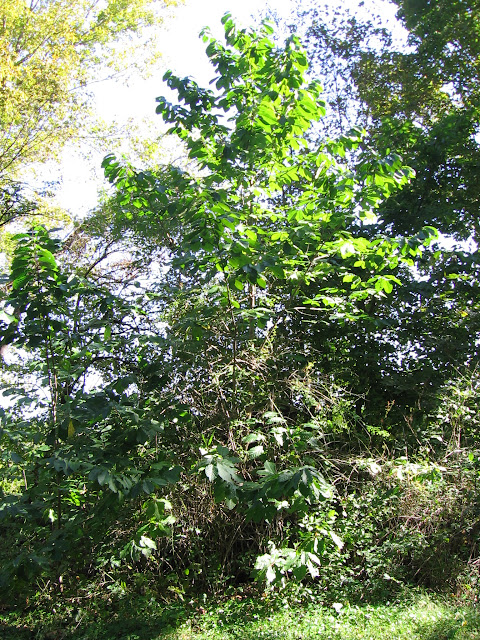 So far I've taken out a half dozen or so saplings that were competing with the paw paws.  Most of the saplings are straight and will find use in the garden.  There's still a lot of removal work to do as there are many saplings growing very close together, as well as a tangle of multiflora rose and wild blackberry in the patch.  Since this is a fairly narrow corridor of woods I'm selecting for the trees I want to have and removing the rest.  Near the paw paws I removed a deformed green ash to give this dogwood, the forked tree, more space.  The tree to the right of the dogwood with the severe lean looks like it has died and will also be removed. 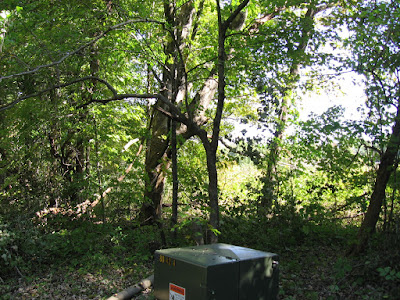 Near the old stump there are a green ash, sugar maple, and redbud tree growing within a foot or so of each other.  I'll leave the redbud tree, since it's a very attractive flowering tree, and remove the others.

North of the paw paws the fence corridor broadens to about fifty feet wide and is populated mostly by tulip poplars.  It looks like these trees all started at the same time, when the area, which was likely mowed or tilled, was left to its own devices as the lot was prepared for a home.  I'm guessing these trees began life around 2000.  Tulip poplars are very fast growing, straight trees that are often the first trees to spring up in an abandoned field.  I removed a number of 'near neighbors' several years ago and the remaining trees are growing quickly.  Someday they will reach a size that has commercial value but not in my lifetime.  It's the wood of choice for paintable millwork, straight grained and easily milled. 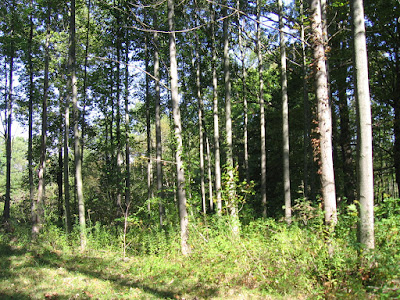 North of the poplar trees, on the other side of the pond, is a fast growing sycamore tree.  This tree was part of a patch of sycamores, five or six of them, that appeared about five years ago.  I removed all but the largest tree and also the invasive vining honeysuckle that was engulfing them.  The tree that was saved has rewarded me by growing leaps and bounds, probably four to five feet a year.  That's not surprising since it has a bottomless water supply and full sunlight all day.  In ten years this will be a substantial tree, if it lives to a hundred a giant.  It's a tree I can admire from the deck. 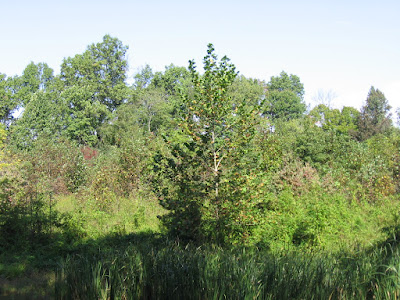 That's pretty much my strategy for landscaping around the edges of the yard - find wild growing trees that I think add to the mix and remove the trees I don't want.  As for the paw paw fruits, I can't find them now.  Something, probably deer or raccoons, got them before I could.
Posted by gardenvariety-hoosier at 10:44 PM 2 comments: