2016 - A quick overview and plans for next year 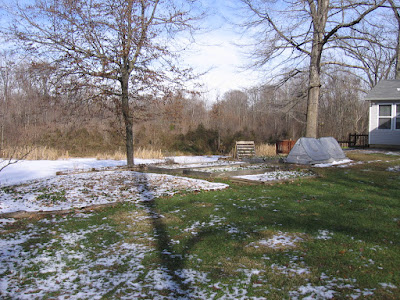 Except for parsnip, this year's plantings have all been harvested.  Total yields for the season were on the light side at 313 pounds.  There were a number of reasons for the low yields.  Last spring I was trying to finish a kitchen remodel that had been ongoing for over a year.   Since there was some uncertainty when the kitchen would actually become functional again, only a few cole crops were started indoors, consequently the yields of broccoli, kohlrabi, cabbage and other brassicas were light.

Tomatoes were hit by what I believe was early blight and septoria leaf spot, and yields were abysmal, just over 12 pounds from 4 cages.  Pickling cucumbers, which in the year previous had yielded prodigiously, produced just over 10 pounds from 3 plants.  Potatoes and sweet potatoes were hit hard by voles.  I still harvested 40 pounds of potatoes but no sweet potatoes.  On a more positive note, it was a mostly average year for peppers (13 pounds), okra (12 pounds), onion (25 pounds) and snap beans (19 pounds).

Winter squash had their best year ever, with a total yield of 135 pounds.  Perhaps it was the  rabbit poop compost and nitrogen-fixing cover crops, or it was just a very favorable year for squash.  At any rate I'll continue to prep the beds much the same way this year.

Under the protection of the plastic greenhouse next year's leafy greens are growing.  There are 2 rows of Burpee's Double-choice spinach and one row of Reflect spinach, a row of Pinetree winter lettuce blend, a row of bunching onion, and on the left, garlic.  With the extended warm autumn the garlic got off to a fast start.  I'm not sure what will happen with it being in the relative warmth of the greenhouse.  I've found the greenhouse prevents the soil from freezing unless the weather gets brutally cold. 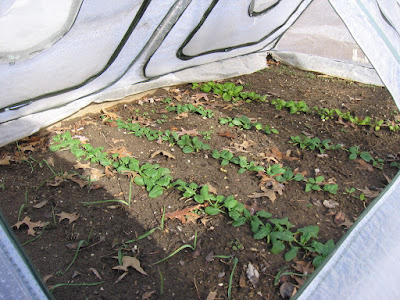 Next year, yes, changes must be made.  I actually wanted to implement some changes this year but the remodeling work ruled that out.  First of all, no roots or tubers next year.  The rodents know where they are and they will be back.  Potatoes will be grown in containers or bags, sweet potatoes will not be grown at all.  That leaves a lot of free space in the largest bed, and that's where the tomatoes come in.

It's unacceptable to give up on tomatoes, that means that major changes in methods are needed.  Here's a list:
Most of the seed-buying decisions have already been made, but I'm still working on what tomato seeds to order, and it's a great way to pass the time on a winter's day.   I try to keep the number of companies that I buy from at a minimum in order to hold down shipping costs, but it looks like this year I'll have to order from a number of suppliers.  I always order from Pinetree, but this year will also place an order with Totally Tomatoes, Peaceful Valley (for cover crops) and Johnny's.

Finally, next spring the strawberry plants in the perennial bed will be taken out and replaced with more asparagus.  The bed currently has 6 asparagus plants and there should be room for 4 more, which should make for decent yields of asparagus in the future.  Plenty to keep me busy.

Here's wishing everyone a successful 2017.  We'll all need some luck in the coming year.
Posted by gardenvariety-hoosier at 12:18 PM No comments: