Last week's rains finally ended on Saturday, and Sunday I started doing some preparatory tasks in the beds.  The  rain gauge showed 4 1/2 inches last week and with temperatures more like April,  it was unusual to say the least for February.  It was warm like this last February and this pattern is looking like the new normal - a warm spell in late winter then later a killing frost.  Last year most of the buds on the apple trees were killed by the late freeze.

Well Sunday was beautiful although still a bit muddy.  It was time to remove the plastic greenhouse, prop up the strawberry pallet planter and put the mobile cold frame in place.  Here's the big picture: 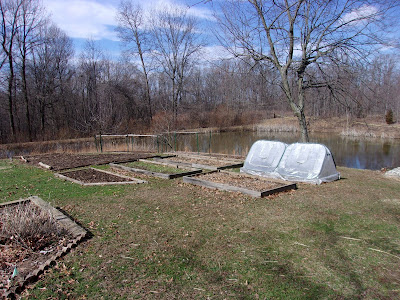 I usually remove the plastic greenhouse around March 1st.  Warm as it's been, it could have been removed earlier but I wanted to wait until the rains were finished as the soil inside is plenty wet already.  The garlic is looking fine, just a few plants missing: 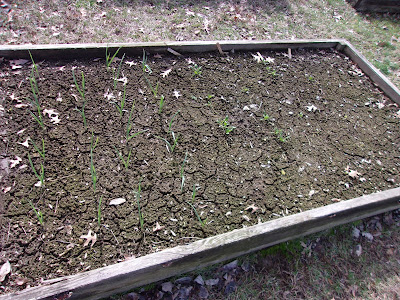 But the overwintered spinach did not fare so well, and the row of lettuce is completely gone.  Several nights at -12 F will do that.  Still, there's enough spinach to provide some nice heads, and I'll seed in more spinach in the bare spots, although I never have much success with spring sown spinach. 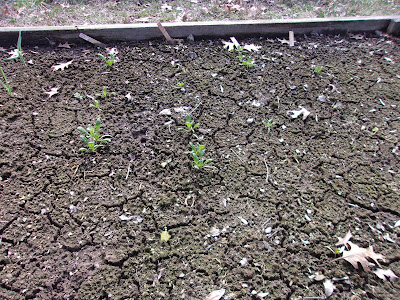 On to the strawberry planter.  Last fall I removed the two props and laid it down on a layer of straw, then covered all of it with straw and burlap: 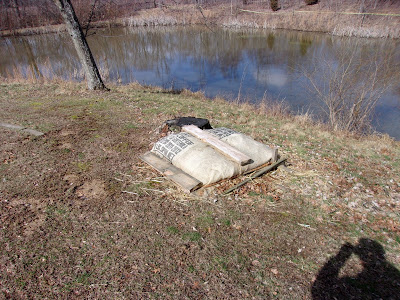 Yes I managed to insert my shadow in the picture once again.  After removing the straw and attaching the props, it's ready for a new season. 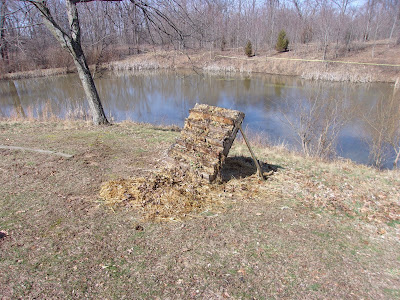 It looks like most of the strawberry crowns survived, and for the ones that didn't make it, a new runner can always be stuck into the potting mix to start a new plant.  All of the old runners were dead and were removed.  This location is not the best, it gets only 4 to 5 hours of light a day.  Eventually I want to design and build a better looking planter that doesn't have to be dropped to the ground  every winter. 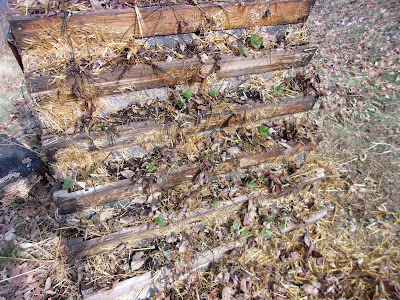 Inside under the new LED lights, the onions are starting to germinate and the lettuce has opened up it's seed leaves.  I found that the LED lights have a focused cone of light, that is, the light doesn't spread out much, even at 16 inches above the plants, so between the lights and at the ends of the trays the light falls off somewhat.  I put a reflector at one end and will put another reflector at the open end, but I may have to buy a third light, especially when it gets 4 trays side by side. 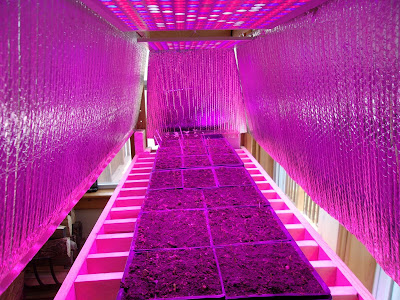 Until the lettuce puts out some true leaves it's too soon to know how this is going to work.  I've found lettuce is a good indicator of the quality of light.  If it's inadequate, the lettuce will go spindly.

Lastly I rolled out the cold frame to it's springtime place.  I'm betting that the pond gets another skim of ice before we really get into spring. 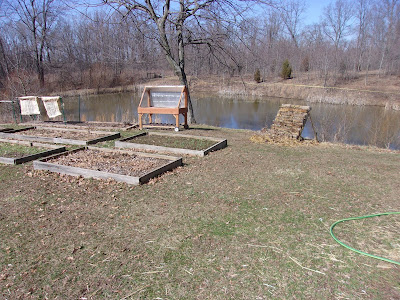 Posted by gardenvariety-hoosier at 12:00 PM 2 comments:

With the unusually warm weather in February the parsnips that were grown last year were starting to send up green fronds.  When they do that the flavor usually goes south, so it was time to dig them up.  These are Javelin, from Johnny's.  I've found that this variety outperforms the Harris Model that is commonly seen. 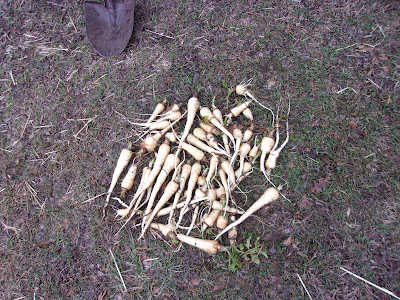 I like parsnips, but they don't produce a lot, especially considering that they have all year to grow.  These came from a 4' x 4' patch, probably about 4 to 5 pounds.  There's a recipe for parsnip muffins that I've been meaning to try out.  It's definitely time for pork roast and parsnip.

To see what other gardeners are harvesting, head on over to http://www.ourhappyacres.com/
Posted by gardenvariety-hoosier at 11:09 AM 3 comments:


Hello once again.  I haven’t posted since I broke my foot last fall.  Lesson learned:  watch where you walk when working a leaf blower, because a broken foot takes a long and painful time to heal.  The foot is working better now, spring is on the way, it’s almost time for starting seeds, and I’ve got some new LED grow lights to show off.

For years I’ve used a 4 foot shoplight with 4 fluorescent bulbs to start seeds, and for years there have been times when there were more seedlings than space under the lights.  The workaround was to do a plant shuffle, moving trays out to the cold frame, then moving them back inside if a frost was imminent.  Even with the extra trips between house and coldframe there were times when I had to hold off starting seeds until space opened up under the lights.  This year I knew I wanted another light unit to avoid those extra trips, and I also want to raise some extra seedlings for friends and neighbors.  I almost bought a shoplight at Lowes when they had a really nice one on sale for $40, when a thought came to me: are there LED grow lights available that can be used for starting seedlings?

LED growlights are relatively new but are being adopted quickly by growers.  The beauty of the LED is that it can be manufactured to produce light in a relatively narrow band of wavelength, or it can be made to produce a full spectrum of light, and these different LED's can be combined in a light unit to produce virtually any kind of light.  Some of the fancy units even allow the user to control which lights in the unit are turned on.  Since a plant’s use of light is weighted more in the red and blue parts of the spectrum, an LED growlight can be tuned with a selection of LED’s that produce light at the wavelengths that plants need the most.  In theory, an LED growlight with a light output tuned to produce useful light should use less electricity than other lights and still produce the same amount of growth.

Several years ago I made a post about lights, and I’ll borrow some of the tables for this post.  The ‘action spectrum’ of chlorophyll A and B is strongest in the red and blue regions.  Which is a little weird because sunlight peaks right between the reds and blues, where photosynthesis isn’t driven as strongly. 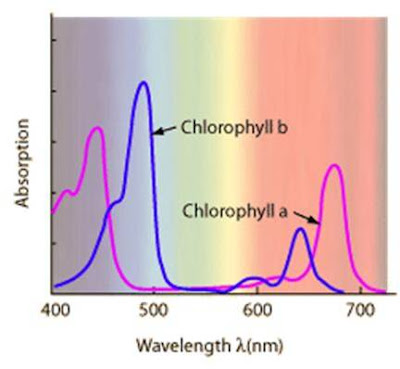 Of course, there’s more to it than that, there's always more to it than that.  That action spectrum measures how effective a narrow wavelength band is in driving photosynthesis, then adds it all together to make a chart.  It doesn’t take a holistic view of how the full light spectrum works together to grow a plant.   There are auxiliary pigments that can capture photons in that yellow/green region that chlorophyll doesn’t use and pass on the energy to chlorophyll.  There are phytochromes that require UV and IR light in order to regulate growth and maintain plant health.  This graph gives a more nuanced view of the total absorption spectrum of a plant, showing that the entire spectrum is usable, but some wavelengths are more useful than others. 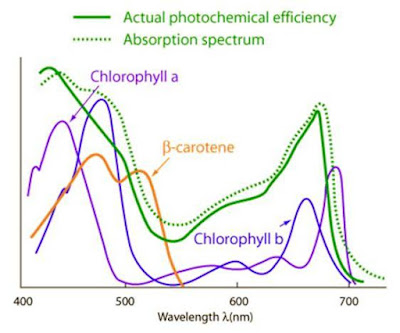 Bottom line, plants require all of the spectrum produced by sunlight, they just don’t require it in the same proportions that sunlight produces, and that’s where artificial lights can improve on sunlight by making a greater proportion of light that is actually useful to the plant.

I shopped for LED lights on Amazon.  At the cheaper end of the offerings were growlights made of square aluminum plates, about the thickness of a slice of bread and a bit over a foot square, weighing not much over a pound.  Most of these had an array of 225 LED lights of 1/5 watt each (nearly all of these LED bulbs are made by the same manufacturer), for a total of 45 watts.  Each LED is in a cone-shaped depression for focusing.  From these small units there is a big jump to the much more powerful fan-cooled units used by professional growers, and not much in between.  I was hoping for a single unit that would take the place of a 4 foot shoplight, but nothing like that was available, so I decided on 2 of these: 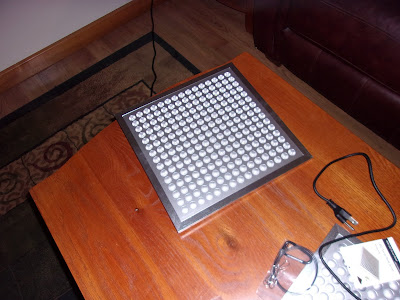 Most of this type of light unit that were available on Amazon had only red and blue LED’s, in a ratio roughly between 2:1 up to 4:1 (red to blue).  After doing some research, I chose a unit that has not only red and blues, but full spectrum white, UV and IR.  That should cover all the bases.  Although the potential output is 45 watts, the unit’s actual energy consumption is more like 35 watts. Don’t ask me why this is so, I don’t know.

My educated guess is that 2 of these lights will take the place of a 4 foot shoplight with 4 bulbs.  They should use about half the electricity of the shoplight.  The first thing I found out about them is that these bulbs are pinpoints of very bright light.  If I look directly at them, I’ll have after images for several minutes.  I got this photo by first pressing the shutter on the camera halfway down while holding the camera directly over the light, which freezes the aperture opening, then moving to an angle and taking the shot.  It's not floating in space, it's the same light as in the picture above. 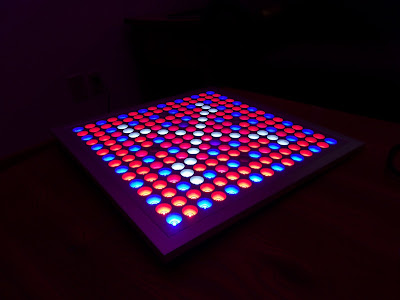 Including shipping, the cost for 2 lights was $66, comparable to what I would pay for a new shoplight and 4 T8 bulbs.   The manufacturer is Growstar.  I counted 144 red LED’s, 50 blues, 25 white full spectrum, 4 IR and 2 UV.  According to the maker, there are 2 different kinds of red LED’s at slightly different wavelengths, but they all look the same to my eye.

I built a small frame from 1x2’s to hold them.  With eyescrews installed on the top of the frame, the assembly can be raised and lowered with ropes, just as with the shoplight.  It’s much easier than moving a shelf with trays on it up and down.  You can see just how thin these lights are here. 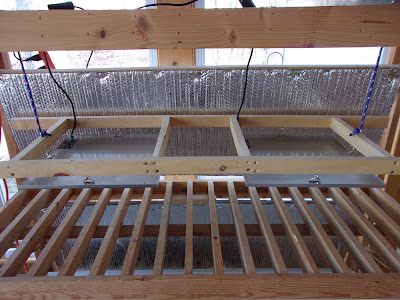 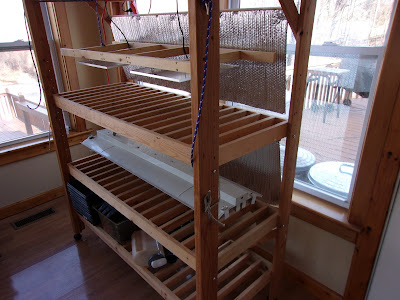 LED’s turned on.  It looks like there is adequate light coverage for 2 trays end to end, and I’m hoping for enough coverage for 3 or 4 trays side by side. 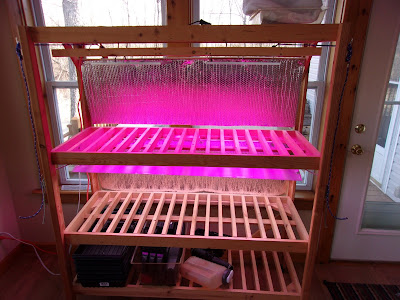 Looking up, comparing the new technology to the old technology: 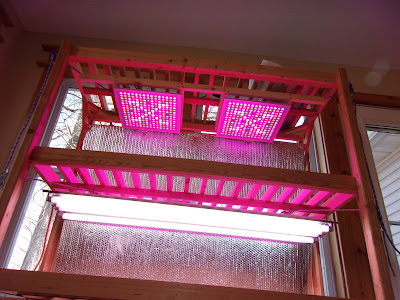 The grow chamber that will be used, with a movable reflector installed on the front side. 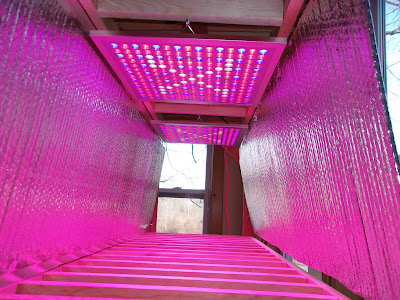 I’ll be starting onion and lettuce seeds shortly, and will find out soon enough if these lights are effective or not.  I think they will be, but if they don’t do the job, another light can be added with some modifications to the frame.  I’ll keep posting on the results.  Happy growing season, all


Posted by gardenvariety-hoosier at 5:19 PM 2 comments: