I don’t have much experience pruning trees other than removing low branches.  Most large yard trees can be treated with benign neglect.  Fruit trees are another thing altogether.  Shaping the tree properly in its early years can have a strong impact on its capacity to bear fruit later on.  I wanted to get it right, but for a novice like me pruning a young apple tree is like driving at night with the headlights off.

I planted two apple trees three years ago (I think), a Golden Delicious and a Fuji.  They were in pots and had some lateral branches on the main stem.   The Golden Delicious is now about 10 feet tall, while the Fuji, with a central leader, is more than 12 feet in height.  I’ve made attempts over the years to shape their growth by removing some lateral branches and vertical growth.  This year I realized that both trees needed a more aggressive pruning to shape their growth as they approach maturity.
The thing about pruning to consider is not what the tree looks like just after it is pruned, because at the end of the growing season it will look quite a bit different.  The manner in which the tree is pruned affects the manner in which it grows.  One has to envision what a pruning cut will produce in branches in the years to come.
I checked out some books from the library on pruning, some helpful, others not at all.   Currently many resources recommend a central leader tree with the largest branches low and smaller branches high for maximum fruit production, assuming I guess that the rootstock the tree is grafted to will prevent the tree from growing excessively tall.   Two or three whorls of well-spaced scaffold laterals are allowed to establish themselves.  Unfortunately the tree rarely cooperates with the ideal.
I already knew that trees grow at their tips to increase length and the phloem layer just beneath the bark produces wood and adds girth.  Trees don’t grow out of the ground and a branch always remains at its initial height on the trunk.   During the winter chemical energy is stored in the roots and in the spring  the sap moves up to feed the opening buds.  Pruning removes buds, meaning that as sugars move up the tree in spring the chemical energy is distributed to fewer buds.   It seems counterintuitive, but a weak branch will grow more if pruned more severely than a strong branch.
While pruning new growth back a few buds will stimulate growth, completely removing a branch at the branch collar ends that branch for good.  However, if you leave a short stub that branch may well start a new bud and ultimately a new replacement branch.   This branch was removed because there were two branches arising at the same height of the trunk. 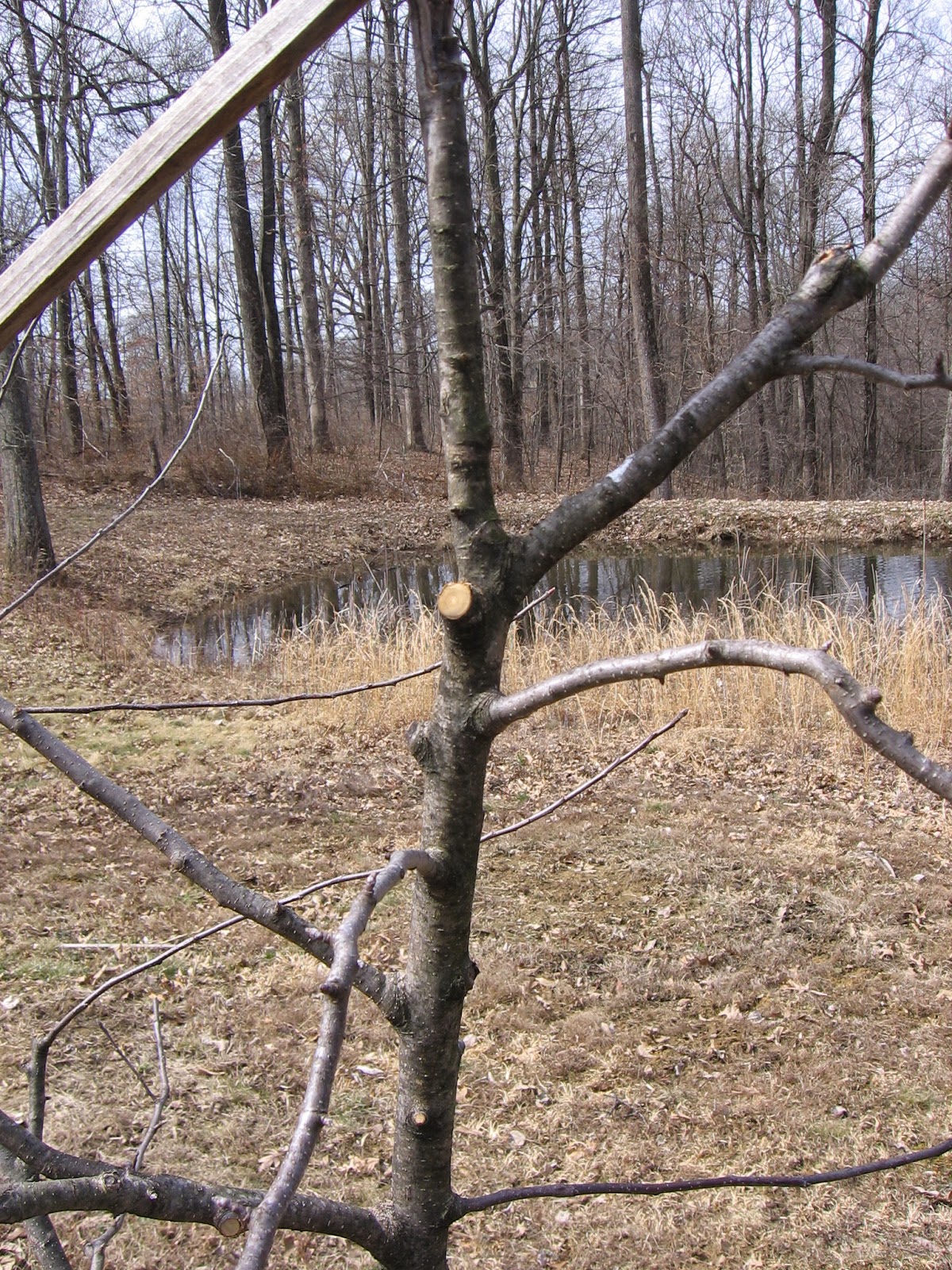 Two weeks ago with cutting tools in hand I set about pruning both trees.  The Golden Delicious tree is something of a problem tree.  It has a large lower side branch at about a 45 degree angle, really not enough, although the crotch appears solid.  Maybe I should have removed it early on, but there were few other scaffold branches to work with so I left it on.   This is the tree before pruning.  It had a large number of watersprouts and crossing branches from last year's growth. 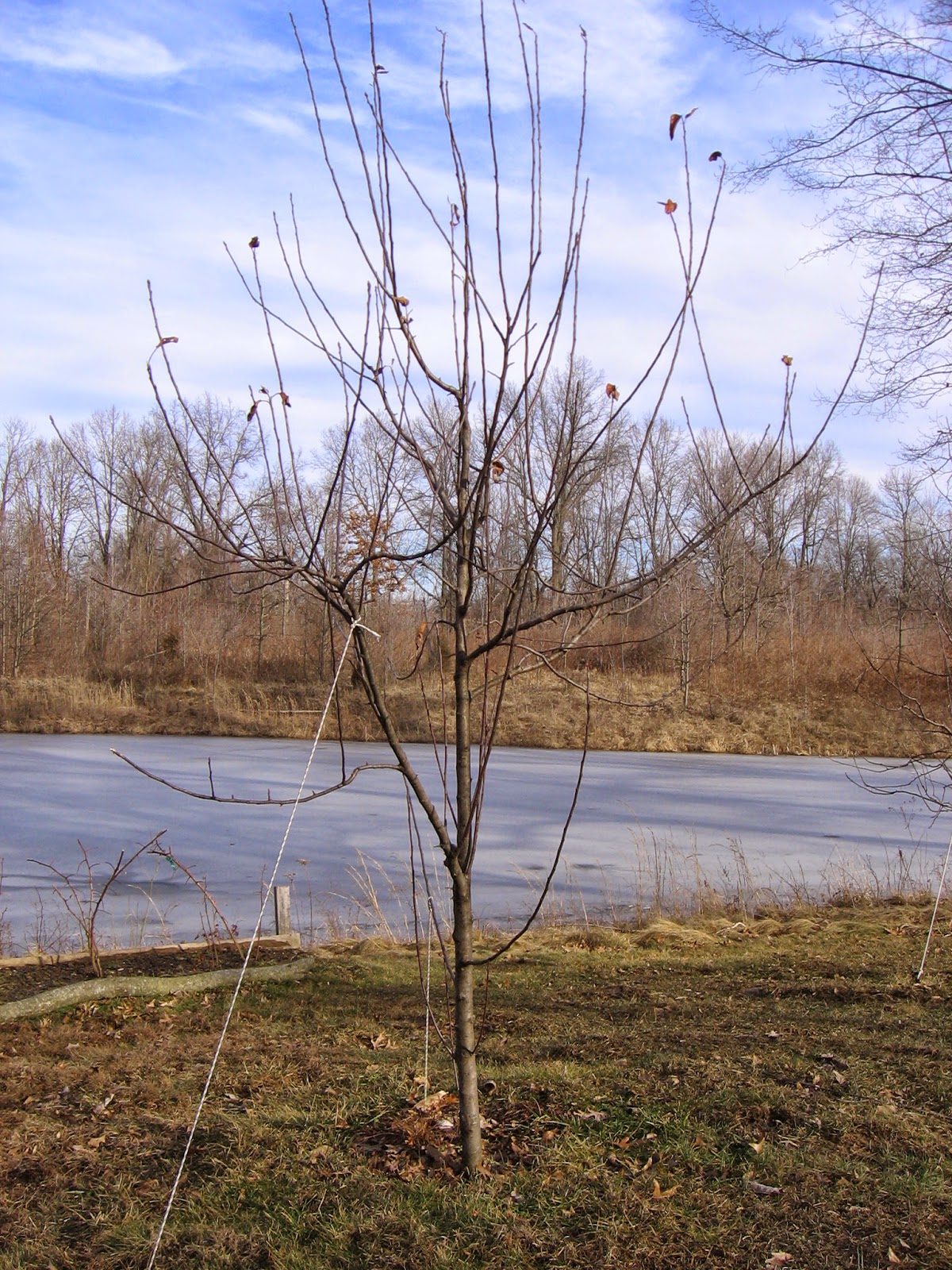 Last year this tree lost its central leader.  A high branch came off the leader at an acute angle and I planned to cut this branch off when the tree went dormant, but circumstances forced my hand.  Last summer I was trying to spray the leader with some Neem oil and as I was pulling down the leader to spray its leaves the crotch broke.  The leader tore off, leaving the uppermost branch and a large gash in the trunk. The tear has healed partially but it may not heal strong enough to support the weight above it.  Next winter I'll decide whether to remove the topmost branch entirely. This is the same tree after pruning.  It looks severe, but most of the mass of the tree remains.  With the central leader gone, the tree is best described as a half-standard.  In all likelihood the uppermost branch will have to be cut off below the wound but I felt that, for this year, enough wood had been removed. 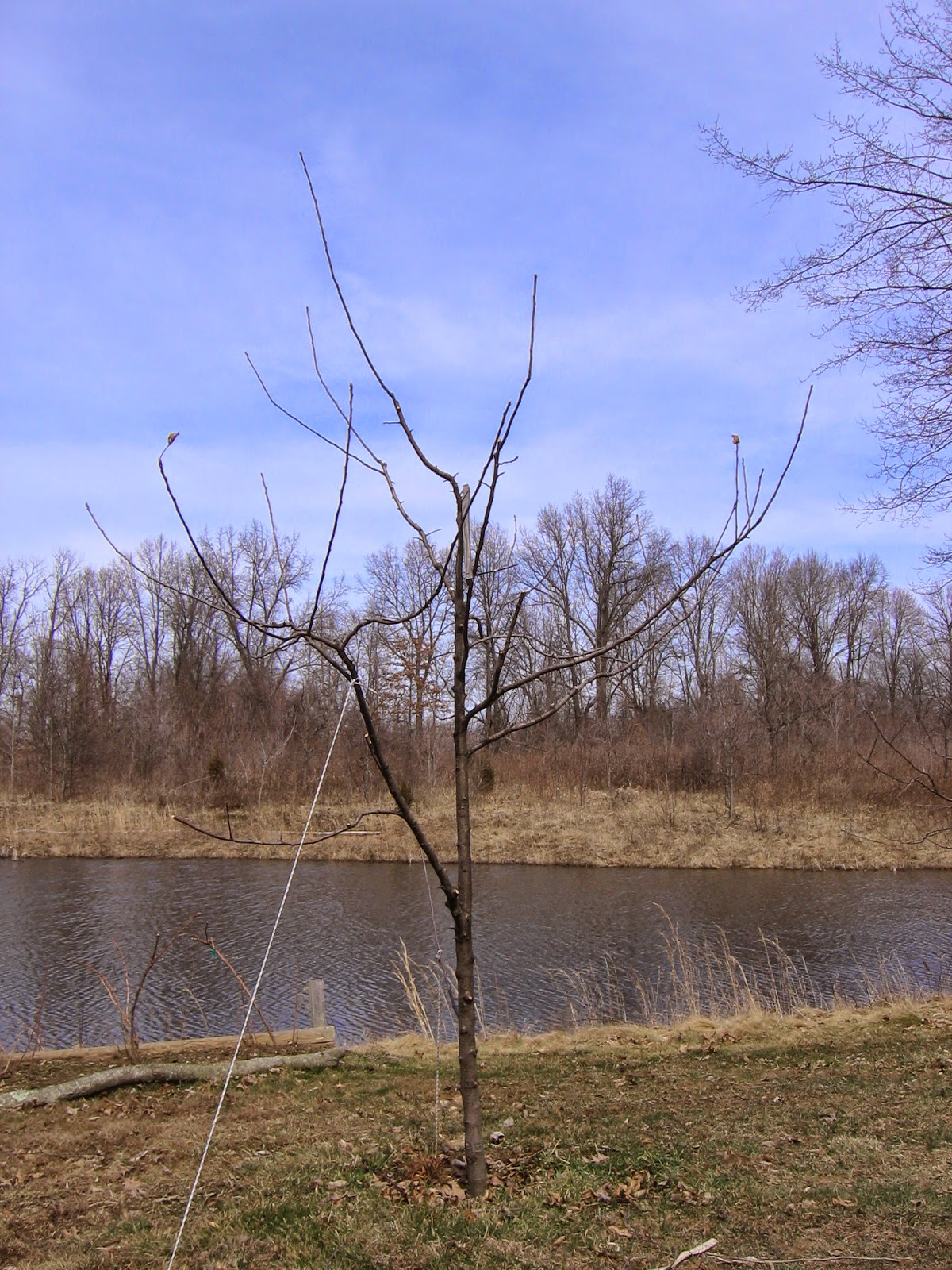 The Fuji has a much better fan shape and was easier to prune, although some thinning was needed. Many of the laterals were too closely spaced had to be removed.  You can’t see it well in this picture since the shot doesn't go high enough, but an upper branch matched the central leader in height and one of them had to go, otherwise the tree would have two leaders. 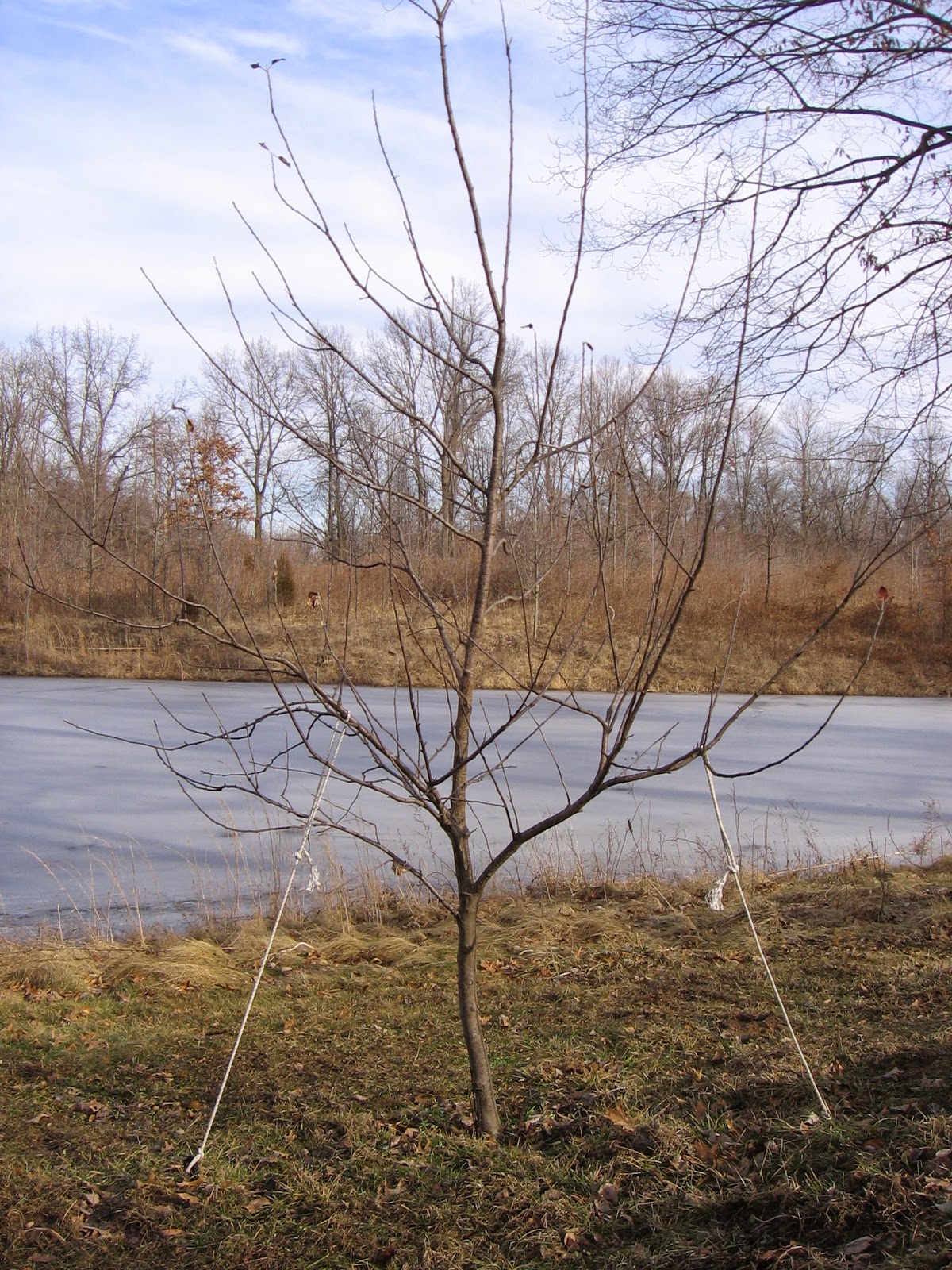 This is the same tree after pruning. I tried to thin out the upper branches more in order to let light into the lower branches.  The central leader is reaching for the skies, and it may well have to be removed because it will be hard to reach apples up there.   It looks like the tree will flower this year and produce a few apples.  For the time being I’ll leave the leader in place, and see if the first years’ fruit production will stop the vertical growth.  Any reader’s suggestions are welcome. 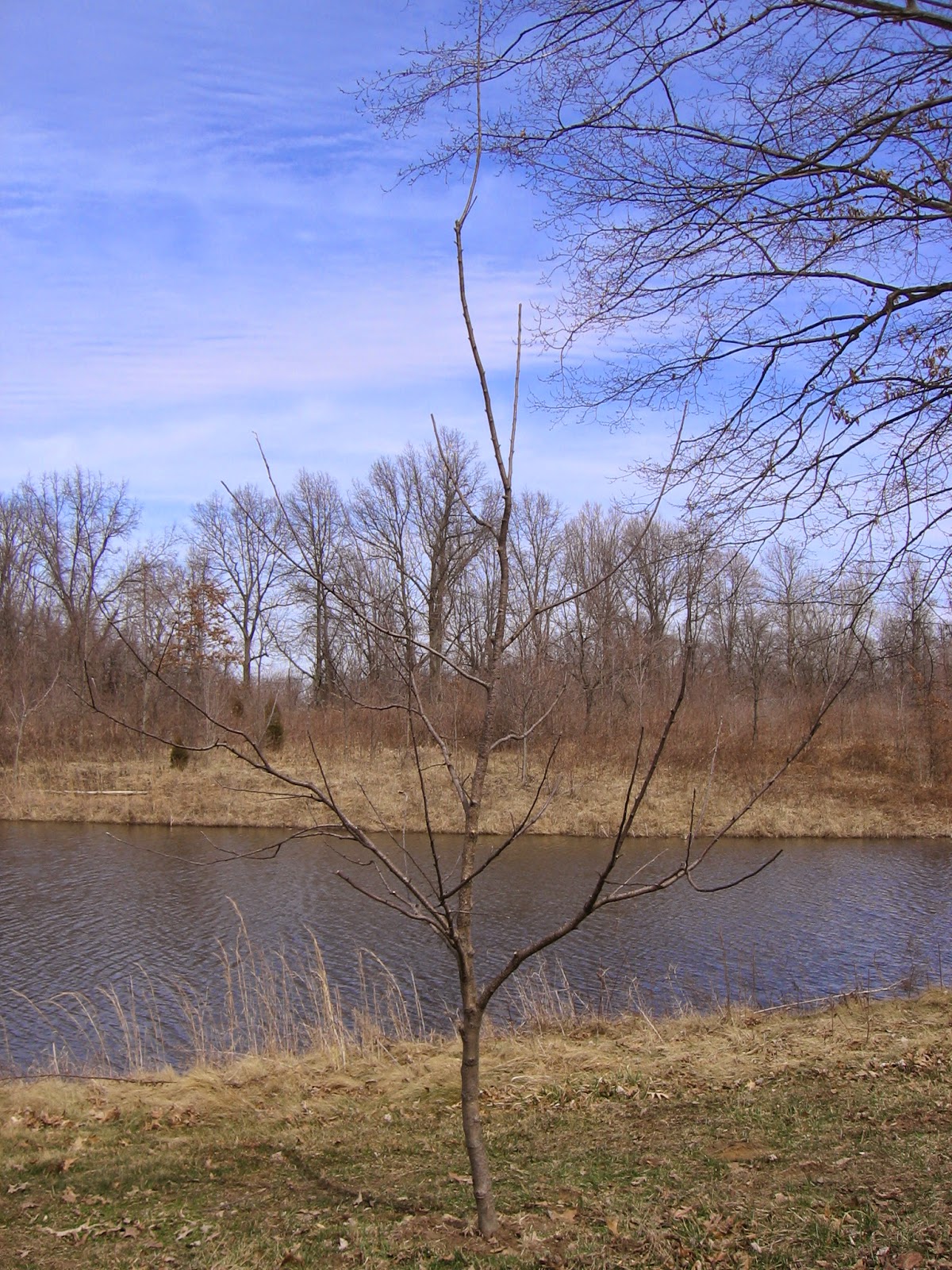 Posted by gardenvariety-hoosier at 5:51 PM 5 comments: