Tying things up at the end of the season

All of the annual plants are out, all the structures have been taken up.  A few days ago the remaining chores were taken care of.  At this point little remains to be done, the beds are mostly ready for winter.

The asparagus was cut down a few days ago. 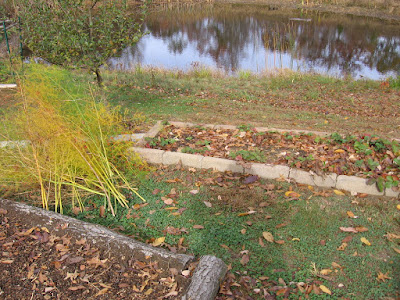 Spinach for next spring was planted in early October, two rows of Burpee's Double Choice hybrid and two rows of Viroflay.  It germinated well and is showing the first true leaves.  I'll need to thin it soon.  Before the first major cold arrives the bed will be covered with a plastic greenhouse, helping to warm the soil over the winter. 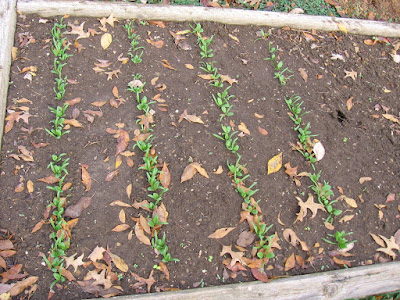 Success with spring-planted spinach has been hit or miss for me, but the overwintered spinach is pretty dependable, and early, usually mid-March.

Next year's tomato/pepper bed has a nice cover crop of field peas, oats and berseem clover growing in it.  At the rate it is growing there might be a few clippings that I can feed to the rabbits before long. 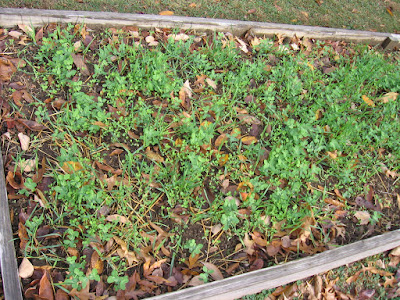 The sweet potato patch will be next year's potato patch. After the sweet potatoes were harvested I spaded over the soil, seeded it with the same cover crop mix and covered it with some half-finished compost.  The crop has germinated but is too small to see. 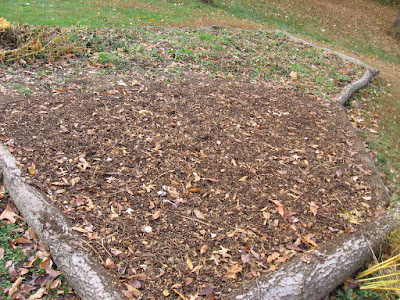 I was going to cut down the raspberry plants after the asparagus, but decided to wait.  They succumbed to fungal diseases and produced a small fall crop, another casualty of the wet early summer.  In the fall the vines set out new leaves to replace the leaves that had been lost, so they are still doing some photosynthesis.  I'll wait until these leaves brown then cut them down. 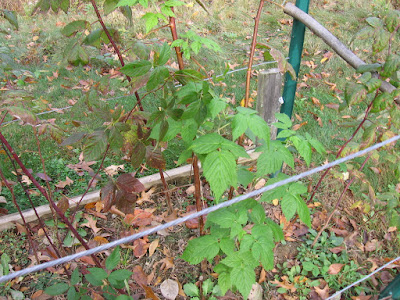 These are everbearing raspberries.  I originally wanted to cut the canes back about halfway to get an early summer crop next year.  Since disease has taken its toll they will be cut back to the ground and the canes burned, so there will be no berries until next fall.
Posted by gardenvariety-hoosier at 6:43 PM 2 comments:

With a frost predicted late last week it was time to get the rest of the produce inside.  The winter squash that were curing in the sun were brought inside and weighed.  Any peppers that were usable were picked. The chilis - Joe Parker New Mexico, Ancho, and Serrano - were put in the dehydrator.  For sweet peppers there's four Mama Mia Gallo and a lone Jimmy Nardello that went into the refrigerator. 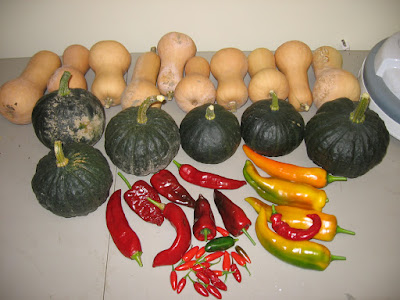 The Teksukabotu squash had an off year, for them, just over 15 pounds total.  Last year they produced nearly three times that amount.  The Metro Butternut squash did well this year with a total yield of 18 pounds (I had cooked two of them before this picture was taken).  Considering the truly awful early summer weather and the extent of fungus infestation I can't really complain.

Then there's the sweet potatoes, about 20 pounds, which were featured in the previous post. 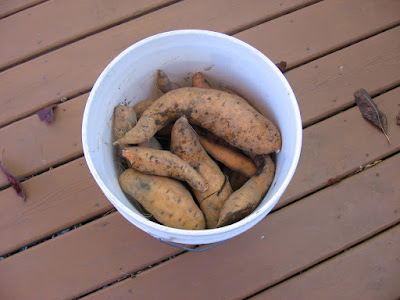 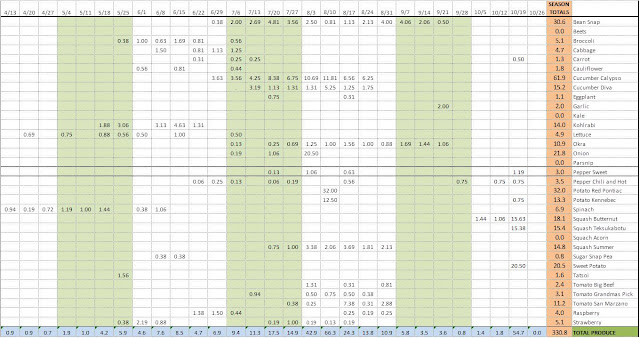 The grand total for the year - 330 pounds.  That's within two pounds of last years total, although production came from very different vegetables than last year.   This year the heavy hitters were cucumbers, with decent yields from squash, okra, beans and onions.  The cole crops did very well, while tomatoes were a bust.  There's always next year!

To see what other people are growing, head on over to Dave's site at http://www.ourhappyacres.com/
Posted by gardenvariety-hoosier at 4:01 PM 5 comments:

I wasn't sure if last night would bring a frost.  It was just below freezing when I got up this morning, cold enough to fire up the wood stove for the first time this season.  I went outside to get the rabbits some sweet potato shoots for their morning feed and the signs of frost were evident on the plants.  With a harder freeze on the way tonight it was time to dig them up.  Sweet potatoes are in the background, winter squash plants in the foreground. 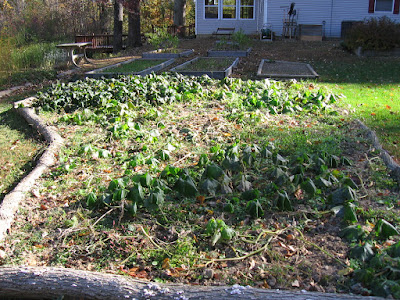 I planted Vardamans this year, 11 slips in all  The first plant that was dug up showed a lot of promise. 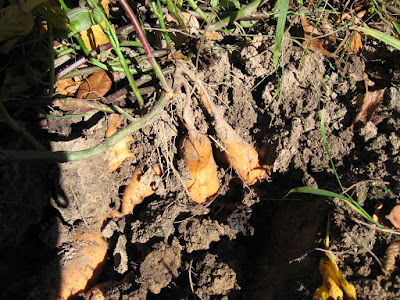 The sweet potatoes mostly filled a 5 gallon bucket.  All the usable tubers came from the primary plants.  In a good year the plant's vines can send down roots that produce more sweet potatoes, but with the cloudy early summer weather most of these never developed to a usable size. 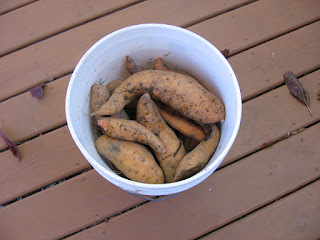 I collected the smallish tubers in another bucket, then turned over the entire patch with a shovel to prepare the area for a cover crop.  Spading over the soil turned up a number of small satellite tubers.  In the left of the picture is a very large tuber with extensive vole damage.  Some of it is salvageable.  At the edge of the sweet potato patch the spading turned up a Kennebec potato that was missed when the potatoes were harvested.  It's been sliced into by the shovel but looks perfectly good.   Can you spot it in the picture? 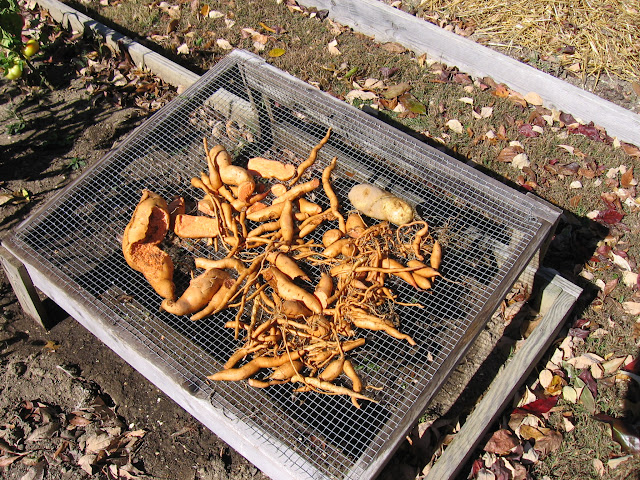 The too-small and deformed tubers will be fed to the rabbits.  That left just over 20 pounds of sweet potatoes for cooking.  Considering the unfavorable weather that's not bad. 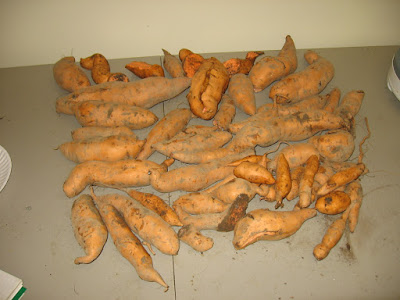 The Fuji apple tree produced three apples this year, its first apples.  The Golden Delicious tree has not produced any apples yet.  The apples are covered with green blotches that look like some sort of algae. 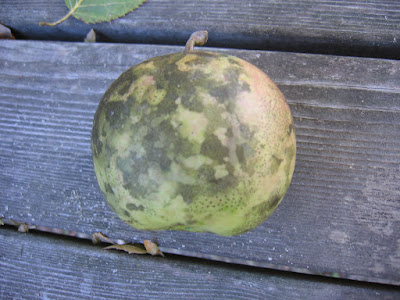 This apple dropped so I peeled off the skin and sampled it.  Despite its appearance it actually tasted like a Fuji should taste, a little underripe but actually quite good.  I'm hoping that next year both trees will give me a decent crop of apples.

The last outdoor project for the season is finished.  From the large bed the ground has too much slope toward the pond, hard to walk on when wet and hard to mow.  Two courses of concrete wall blocks make a terrace that greatly improves the area.  The new terrace will also make it easier to spray the Fuji tree, as it was challenging to use a ladder around this tree.  I think, and hope, that this is the last of the terracing that I do on this property. 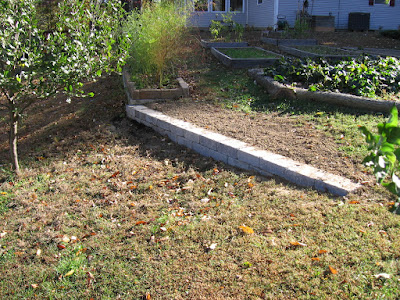 Posted by gardenvariety-hoosier at 4:30 PM 4 comments:

Wrapping up the season

The season is winding down.  There's still some peppers ripening up, and with a few more sunny days I might get a second batch of chilis for drying.  Last weekend I removed the last of the trellises around the squash patch.  That was after picking the squashes.   Last year the yields of squash were at least double this years'. The butternuts did OK but yields of the Teksukabotu were way off.  I cooked one of the butternuts a few weeks ago and it was fine, the rainy weather in early summer did not affect the flavor. 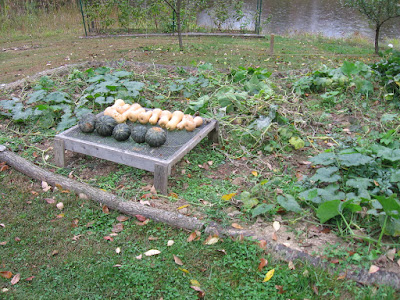 The spinach was planted in the front bed in the picture below a week ago.  I planted two rows of Burpee's Double Choice hybrid, a variety that has always overwintered well, and two rows of Viroflay.  All of it has germinated well.  When cold weather arrives I'll put a plastic greenhouse over the bed.  The middle bed has a stand of buckwheat growing as a cover crop.  The rabbits absolutely love buckwheat. 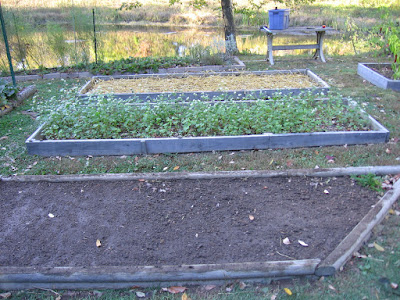 A mix of field peas, oats and berseem clover was seeded in the back bed as a late season cover crop.  It's all germinated and growing well.  I tried seeding berseem clover in mid-summer and it did poorly, guess it does not like the heat.  Next summer I'll try crowder peas as a summer cover crop.

The raspberries, in their second season this year, had a poor fall crop, another victim of the wet summer weather and fungal diseases.  They are everbearing raspberries, meaning they will have two crops every year if I prune off the upper half of the plants after the leaves die off.  Given the extent of the infection I will prune them to the ground and burn the stems.  That means I will get only they fall harvest next year. 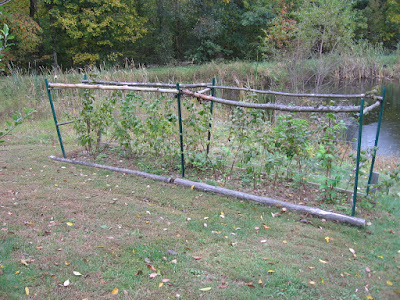 Another 'crop' is growing in the upper end of the pond - cattails.  This part of the pond is shallow and I expect the cattails to eventually march across to the opposite shore.  I'm OK with that as cattails act as a natural scrubber.  Much of the inflow will go through them and be cleaned in the process.  They are also habitat for marsh wrens and red-winged blackbirds. 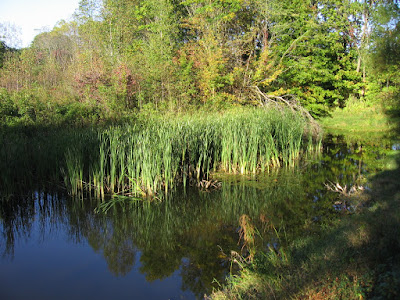 Posted by gardenvariety-hoosier at 5:54 PM 2 comments: