A bluebird in the wood stove

Most of us probably don’t find bluebirds inside their wood stoves with any frequency.   Saturday morning I heard a scratching noise from the stove’s fluepipe.  Suspecting that the bluebird was back and, like last spring looking for a place to nest in the fluecap, I hauled myself out of bed, got the extension ladder and went up on the roof.  I tapped around on the flue pipe a bit.  Satisfied that the bird was not inside I put a plastic cover on the top of the flue.

Back inside the house I made coffee and breakfast, then turned on the TV for a fix of March Madness and news about the Hoosier’s glorious first-round victory.  That’s when I heard a commotion from the wood stove.  Sure enough there was a bluebird inside the stove.  It had remained inside the flue and finding no way out came down into the stove.  Last spring a bluebird had done the same thing.  I was planning to cover the flue top soon since the weather forecasts weren’t showing any more days that might require wood heat.  Not soon enough I guess. 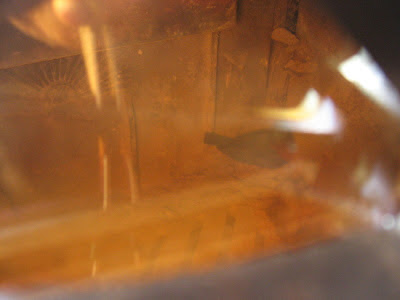 Now the last thing anybody wants is a wild bird inside the house.  Not only because of the damage a bird can do to the house and itself, but also because the bluebird is such an iconic American bird that it’s even more important to free the bird without injury.  It was time to do a bluebird extraction, a method I developed last spring.  I covered the stove with a large piece of Agribon row cover.  The plan was to open the front doors of the stove inside the Agribon, wait until the bird flew out and trap it in the folds of the row cover, then carry it outside and release it. 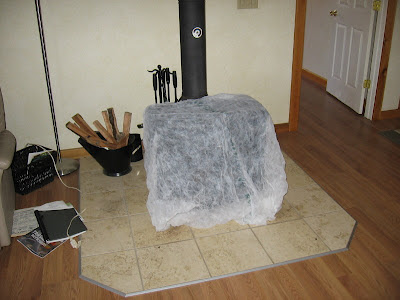 It was a nerve-wracking operation.  The bird finally came out of the doors and I managed to seal it into a pocket of the row cover.  I just got out the door when the bluebird worked out of its trap and flew off – a close call.  I think it’s time to build or buy a proper bluebird house.
Posted by gardenvariety-hoosier at 2:04 PM 3 comments:

Email ThisBlogThis!Share to TwitterShare to FacebookShare to Pinterest
Labels: Wildlife

The weather has been like May or June this week.  A few days the high temp was low 80 degrees and the low temp about 55 degrees.  In the next 6 weeks a lot of the beds will be planted.  I want to give my readers a quick tour of where a small vegetable garden in the midwest is at this time of year.


We’ll start off with the seedlings indoors.  Right now there’s some cabbage family (brassicas) that will be ready to set out in about a week.  There’s another set that has just germinated.  I seed brassicas on a 12 day cycle so I get a continuous supply of them, and I like to use deep 3" pots.  They seem to transplant better when their root system is more developed in a deep pot.  There’s 8 cells of lettuce in there.  The lettuce is more of a backup since it was also direct sown and seems to be coming up fine.  There’s also 18 cells of leeks which are just starting to germinate.  I started a tray of onion seedlings (72 cells) in February and set the tray in the greenhouse bed about a week ago.  I'll transplant them into their bed in about a week. 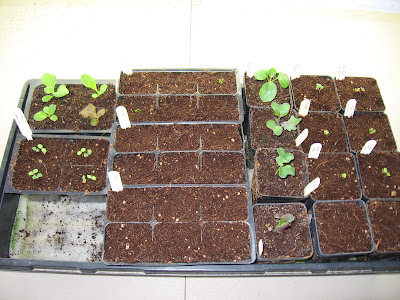 There’s only one bed with plants right now – what I call the greens or greenhouse bed.  It has lettuce and spinach that were seeded last fall.  The greenhouse – a plastic contraption like a pup tent – was set on the bed over the winter.  With the mild winter the lettuce overwintered in good shape, not always the case.  The spinach (Space) had lost viability by last Fall and only 2 healthy plants came up.  That's a shame because I loves me some spinach.  There’s also more spinach that are just coming up from seed in this bed.  For some reason I have never had success with seeding spinach indoors.  I want to transplant the onions into their bed sometime next week. 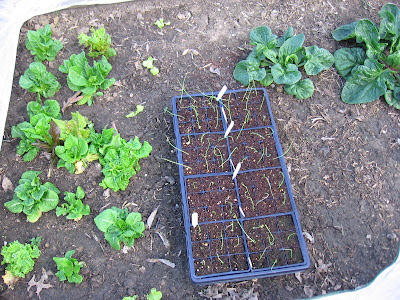 The first set of brassicas – 2 pac choi (the purple one is almost invisible), a Kolibri kohlrabi, and a Major broccoli were also set in this bed and are growing well. There’s also some radish plants on the right side that I seeded indoors on a whim, just to get some real early radish.  Brassicas really take off once they are set into a bed. 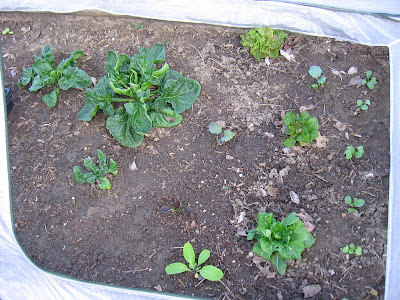 Today I removed the greenhouse and put a cage over the bed to keep out the birds and furry animals.  Usually I remove the greenhouse at the end of March but unusually warm weather made it necessary to remove it now, it was getting to hot inside the greenhouse even with all the flaps open and I don't want the spinach to bolt. 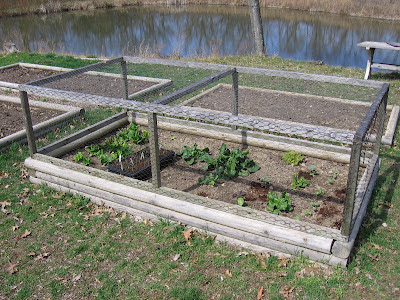 Here’s the compost bin with a “hot” compost pile going – hot enough that I can’t stick my hand into the compost very deep.  That’s good, I want as much compost ready for the beds in a few weeks as possible and I want the heat to kill weed seeds and bugs.  That’s a years worth of compost in there.  Most of it is shredded oak leaves, about a cubic yard when they were added.   There’s also the entrails from about 15 catfish, the head, entrails and feathers from 8 chickens, food scraps, garden waste,  coffee grounds.  Sounds nasty, but the carbon/nitrogen ratio should be about right (leaves are 50:1 so more nitrogen is needed, which the fish should provide).  It’s truly amazing the extent that the volume is reduced as the pile works. 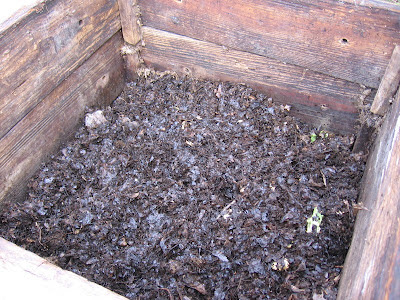 And the fish showed up a few weeks ago.  I started feeding them this week 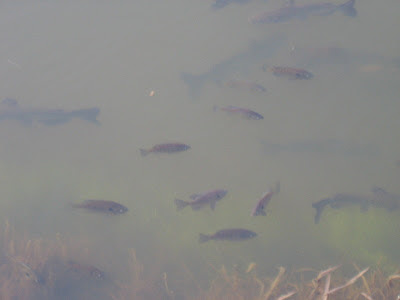 Posted by gardenvariety-hoosier at 3:56 PM No comments: 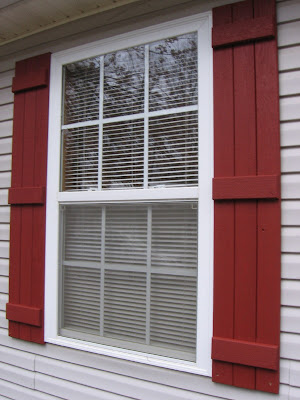 The mild January weather gave me the chance to build some shutters for the windows.  They’re purely decorative, of course, but they add some visual appeal to what is a plain ranch house.  I built shutters for the front windows and they improved the look of the house immensely.  So recently I built shutters for the windows in the gable ends.
I settled on a board and batten style as a nice rustic look, and this style is also easy to build.  The shutters are built out of western red cedar 1x4.  I thought I’d run through the basics of putting these together and try to convey some of my ideas on doing outdoor projects.  A table saw is necessary for this project.  A mitre saw is helpful but not essential.
The first task was to rip a small bevel on the edge of the cedar 1x4’s.  This was necessary to give the shutters a soft shadow line and a finished look.  The saw was set at a 45 degree angle so about ¼ inch of the edge was removed.   Allof the 1x4’s were beveled. 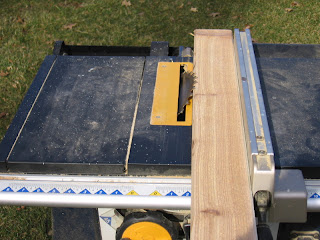 Next the boards were cut to the proper length in the mitre saw.  This can be done with a circular saw but it’s easier with a mitre saw if you have one or can borrow one.  After cutting the boards to length the mitre saw was set to a 45 degree angle and the ends were beveled the same as the sides. 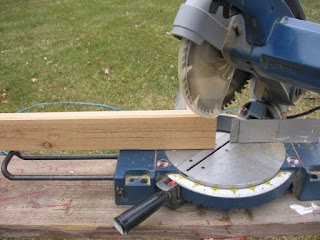 This is a closeup view of the long and short pieces after all the cuts were made. 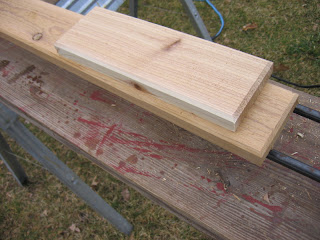 After the pieces were all cut the next step was to apply the first coat of stain.  When putting together outdoor projects I always try to stain the pieces before assembly.  I also stain all sides of the wood, even if the back side will remain hidden.  A face that is not stained will absorb and release moisture at a different rate than a face that is stained, and can result in the wood cupping or even splitting.  It’s best to get at least one coat of stain on all faces. 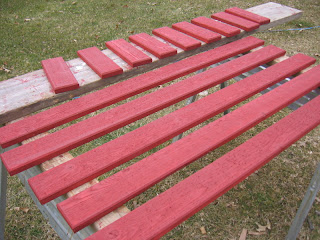 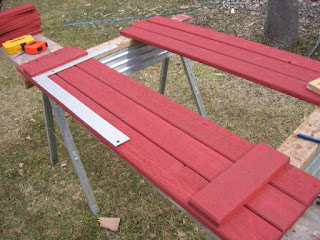 Once the shutter was tacked together it was carefully turned over and screwed together from the backside into the crosspieces with 1¼ inch exterior wood screws - long enough to firmly connect the pieces together without going through the front piece.  I first predrilled holes, being careful to not drill all the way through the front side.  Once all the screws were intalled the shutter was very solid. 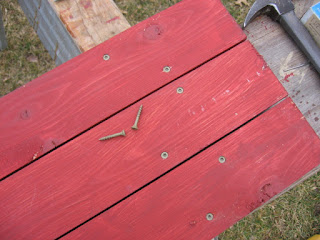 Then I applied another coat of stain.  Rough sawn cedar soaks up stain like a sponge, and the first coat had penetrated the wood enough to leave the shutter looking unfinished.  For the second coat only the front and edges were stained.  It’s always easier to paint the shutter on a sawhorse than when it’s installed, and the paint job should last longer when the coverage is good.  Now that they are finished it's obvious (to me anyway) that the bevels on the edges make the shutter look better than if they had a square edge. 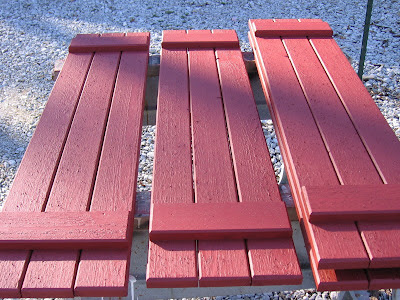 Before installing I tacked some ¼ inch cedar strips onto the back side of the shutter.  This stands the shutter away from the siding so water is not trapped between the shutter and the house.  The shutter was held in it’s final place and four drillholes marked so the screws go just below a siding lap.  Each shutter was then screwed into place.  The screws nearest the window went into a jam stud.  The outside screws went through the plywood skin below the siding.  That’s enough to hold the shutter.  Later I’ll go back and dab a little paint on the screws. 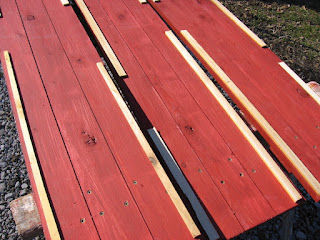 That’s it.  I got the look I wanted at about $25 a window, about the same as the plastic shutters at the big box lumber stores.  Time: I’m guessing about 3 hours per window.
Posted by gardenvariety-hoosier at 2:57 PM 4 comments: