It's been quite a while since I've posted anything, probably several months.  I've certainly kept busy, my white whale has been the ongoing kitchen remodel.  Work began last March and then stopped after a month for what I thought was a brief interruption to get some work done outdoors.  Work resumed in November.

So here's a brief recap.  The original kitchen was designed by morons.  All of the cabinets and appliances resided on the exterior wall - 21 feet of linear kitchen.  The opposite wall was waist-high, for an open concept.  That half-wall was useless for anything.  So I came up with a plan - change the half wall to a full wall and move half of the kitchen stuff onto the new wall .  That would free up one end of the kitchen to be repurposed as a dining area.  The new layout would make for a more compact kitchen that required fewer steps.

The new wall was finished in April, replete with wiring and a water line for the refrigerator's ice maker.  Here's the post on the wall.  This fall I began work on the ceramic tile floor.   Now that I have some seasoning with this type of floor, I can offer some advice.  Don't attempt it unless you have plenty of time and patience available.  At any rate, exactly half of the floor is tiled now, the cabinets are in, new countertops on, the stove and refrigerator in place.  I still plan to replace the pulls.  I think bright brass is gaudy and ugly. 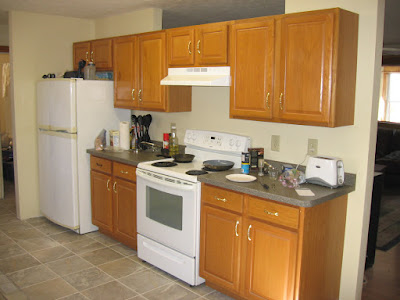 It looks fairly finished on this side, just a bit untidy.  The exterior wall is a different story.  The sink and dishwasher are still functional, but not much longer. 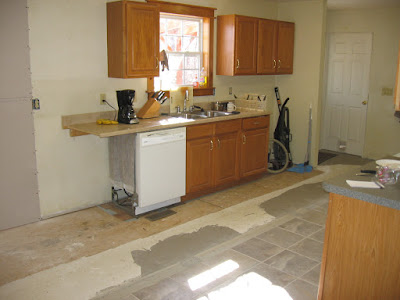 And here's a closeup of the ceramic tiles, showing the layers of materials that go into such a floor. 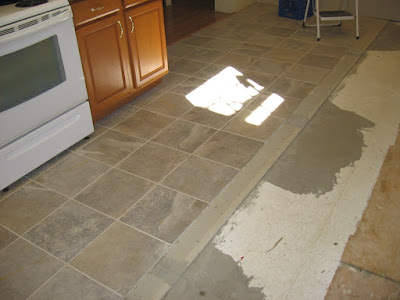 The subfloor is OSB plywood.  In order to make a stable base for the tile, the subfloor was treated with two coats of primer, then self-leveling cement was put in the low areas (the gray stuff), then 1/4 inch fiber-cement board was set in a thin layer of thinset mortar and screwed in place, then the tiles were set in a layer of thinset mortar, the tiles were grouted and the grout was sealed.  It is labor intensive, but it also looks really nice and will outlast the house.

The dining area is the focus of work now.  The drywall was removed and the walls rewired, then a window opening was framed in from the inside.  The window will be near where the stove used to be.  Yesterday I put up the drywall, and today I'm taking a break. 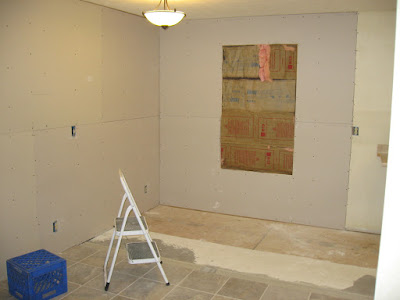 And here's the view from the other end of what will be a kitchen. 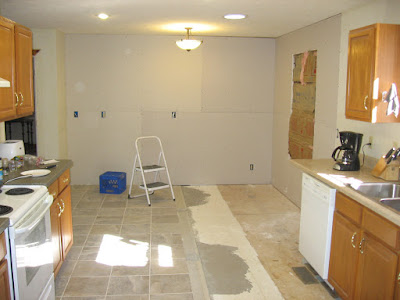 Next task is mudding and painting the new drywall.  Then I'll tile the quadrant of floor by the new window.  That will leave the last quadrant to finish, the one with the sink and dishwasher.  Then things will get interesting once those cabinets come out.  Looks like I'll be eating rotisserie chicken and potato salad from the supermarket for a few weeks.
Posted by gardenvariety-hoosier at 5:38 PM 1 comment: