Well, it's official.  I bought the property adjacent to mine.  The guy who wanted to put in three trailers on the lot put it up for sale after losing his petition for a zoning variance.  I felt I had to do something to protect my pond, since a part of the pond lies in the adjoining lot.  If a new owner was to graze horses or cattle close to the pond, or even worse, allow animals to access the pond, it would be infested with slimy algae. The yellow tape marks the old property line. 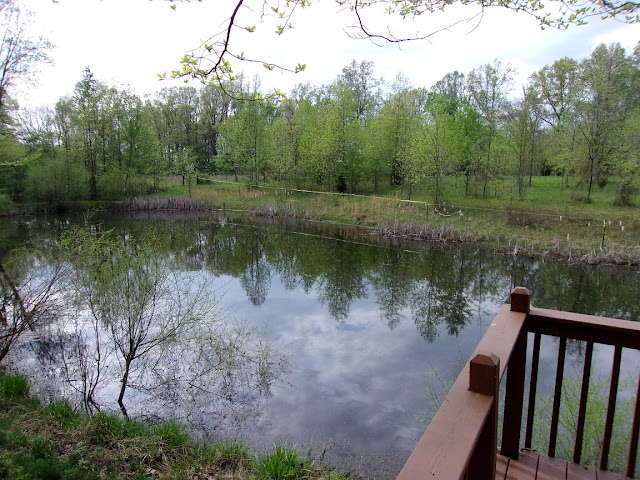 Now I'm waiting on a survey to divide the property.  I'm keeping only a hundred feet swath that adjoins my property while my neighbor on the other side of the lot will buy the remainder from me.  I am in the process of clearing the corner so I can put in some more garden and also some fruit trees.  The garden will grow squash and sweet corn.  I'll buy a gas powered pump for watering.  Once this area is cleared I'll lay down a sheet mulch to get it ready for next year. 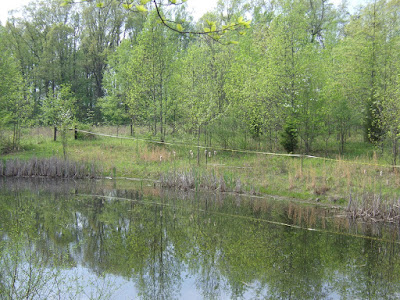 The lot has been in the procession of succession from pasture to woods since I moved here ten years ago.  It's probably about 3/4 tulip poplar, with some oak, maple, cherry, walnut and other more desirable trees making up the remainder.  I plan to selectively remove many of the tulip poplar, which is almost a weed in my view, to make room for the other trees.

It's hard to believe that the garden is mostly in.  It's hard to remember if we even had a spring, and it's certainly summer now.  About a week ago I dug up the two beds that get solanacae.  The beds had a cover crop of oats and field peas that was seeded in March.  The ground was nice and loamy, easy to turn over. 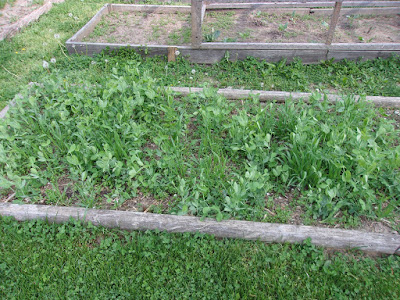 The roots of the field peas were covered with nodules containing nitrogen-fixing bacteria. 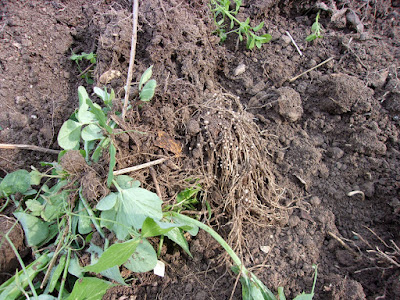 After turning over with a shovel the beds were tilled with the little mini-cultivator.  I hope the day comes when this isn't necessary, but there are still some clods of clay in the soil that need breaking up.  The tomato cages were installed on fence posts and the tomato seedlings were set in, along with peppers and eggplant.  Fast forward to now, and they are  looking pretty good. 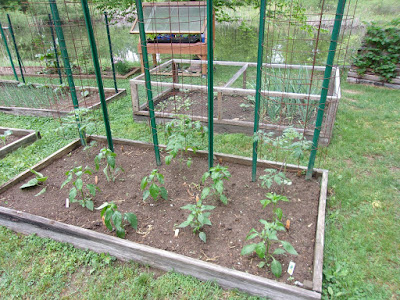 While the indeterminate tomatoes are grown in narrow 16 inch cages that are 5 feet tall, actually taller because they are hung on the fence posts a foot above the ground, the determinate sauce tomatoes are grown in wide 22 inch cages that are 4 feet tall.  The unplanted spaces will get Bride eggplant, which germinated a week later than the other eggplant and isn't quite ready to be put into the bed. 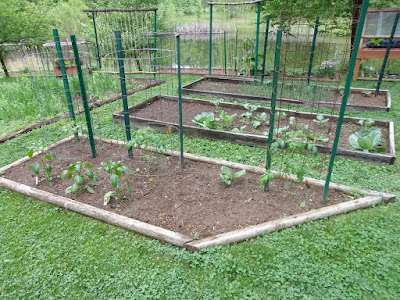 After losing most of the brassicas to cutworms, the last set of seedlings escaped their onslaught.  Maybe the repeated sprays of Bt got the little devils.  Better late than never.  Since the remainder of this bed will not get brassicas, I seeded bush beans and carrots in the open space. 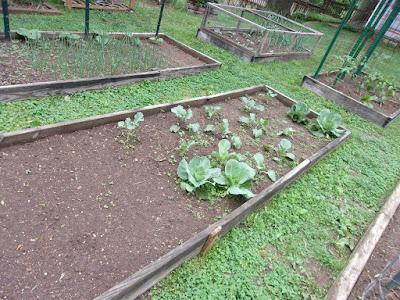 Cucumbers were set out.  There's one Swing cucumber, a new one for me, for slicing, and four pickling cucumbers, Calypso and Vertina.  The cutworms got many of the onions as well but they have recovered much better than the cole crops. 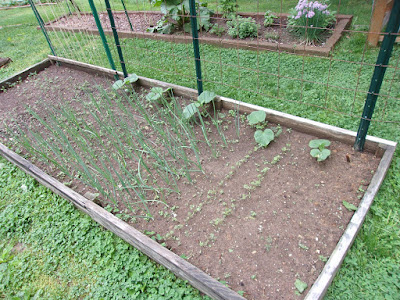 The big bed also had a cover of oats and peas.  I tilled up small patches and seeded squash in each patch.  There's a pole bean trellis in back.  The squash should have no problem growing over the top of the cover crop, which will wilt in the summer's heat. 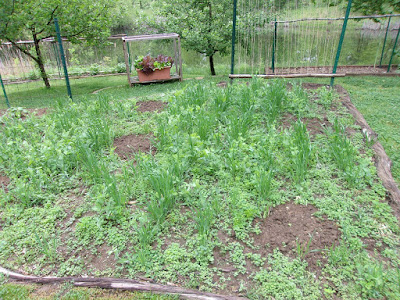 While I was finishing up the garden work last weekend, the neighbor's son stopped by and did some fishing. He got several nice bass. 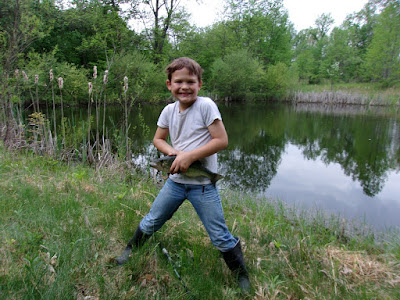 The robins made a nest in the strawberry planter, and every time I walk out to the garden she flies off in a commotion.  Guess we will have to co-exist. 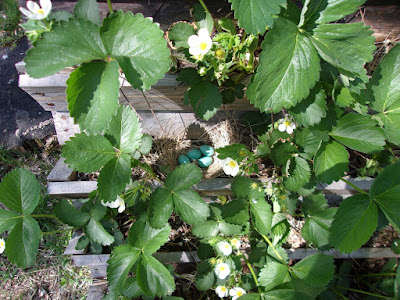 And the front of the house is still a work in progress, with new edging around the flower beds waiting on when I get the time.  I had hoped to have this finished last fall, then broke my foot.  I was amazed that all the plants returned after the trampling some of them got while the porch was being rebuilt.  The rhododendron, which has never looked healthy, will be removed, after it has flowered of course, and replaced with a shade-tolerant hydrangea.  As a final touch I'm refinishing the cedar rocking chair which will take its rightful place on the porch. 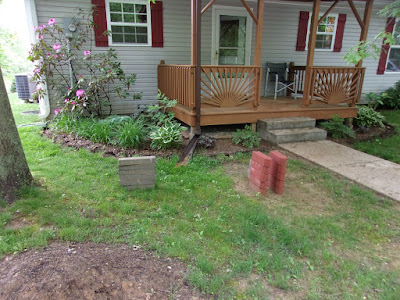 Posted by gardenvariety-hoosier at 12:58 PM 3 comments:

Yesterday's weather was mid-80's in the afternoon, with little shade because the trees hadn't leafed out.  I think yesterday's warm weather jumped started the leaves, because they are unfurling at a rapid pace now, and things are moving along at a good pace in the vegetable garden too.  The rhubarb, planted last year, is sizing up nicely.  I know that you are supposed to cut off the flowers but I want to see what they look like. 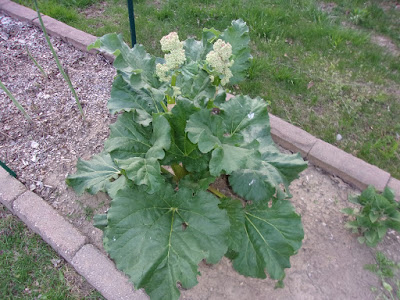 These asparagus shoots, over a foot tall, got away from me.  Still, only a few inches at the bottom was woody.  Four of the six plants are producing now, and I'm waiting on shoots from the other two. Hope they did not die over the winter. 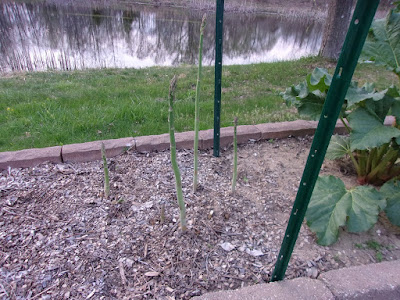 Moved out of the coldframe over a week ago, the Earthbox lettuce is practically popping out of the container.  I plant the lettuce thick, so when one plant is cut a neighbor quickly takes its place.  The lettuce this year is growing in ProMix, so much better than the lettuce that did not even grow last year in a name brand potting mix which shall not be named.  I need to do another picking to make room for some summer lettuce (Pinetree's year-round mix). 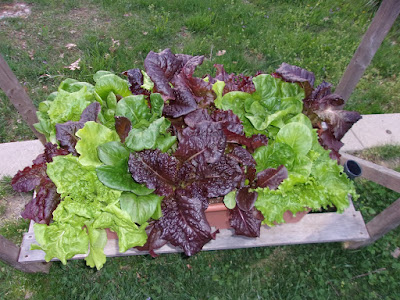 With nothing even close to a frost in the forecast, the tomatoes were moved out to the coldframe to join the peppers.  With abundant natural light they are really growing strong, and should be more than ready for planting in about a week. 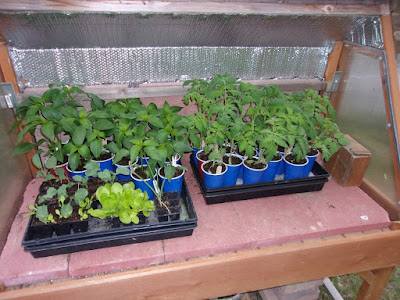 Under the LED lights, a few of the tomato plants were starting to show signs of leaf burn as they grew taller and closer to the lights.  As with the lettuce, I think this is a problem with the two UV LED's in each unit.  Since the individual reflectors do not spread the light out very much, a seedling that grows directly under a UV LED could get too much of this high energy light.  It's not that much damage, and the plants have easily outgrown the damage now that they are outdoors, but still, it's a concern and a fundamental flaw in the design. 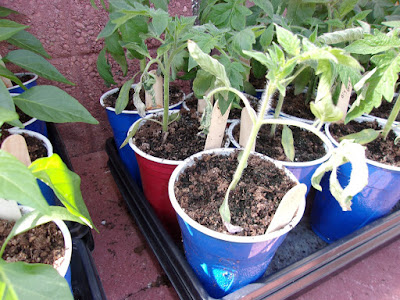 Under the lights, okra, eggplant, cucumber and one Basil plant remain, as well as some flower seeds that haven't germinated yet.   The Bride eggplant took nearly ten days longer to germinate than the Lavendar Touch eggplant, but it'll get there.  The okra and cucumber look small, but they come on really fast, so they should be ready in less than two weeks. 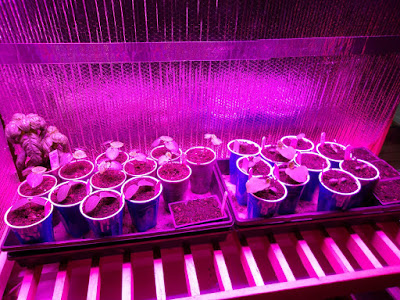 Oh, the cutworms ravaged the cole crops once again, after I had planted a new set of them to replace the previous plants lost to the cutworms.  They spared most of the cabbage, seeming to prefer broccoli and kohlrabi.  I guess they win this round, but I'd like to think that the leaves sprayed with Bt did a number on them.  There's one more set of cole crops in the coldframe which will be ready for planting in about a week, and I'm still hoping that one or two broccoli plants survive. 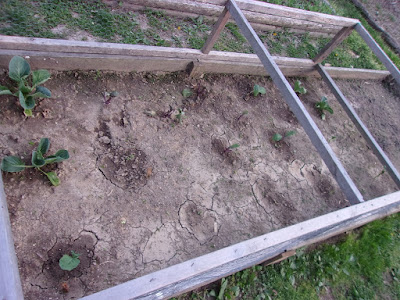 Next year will require more drastic measures.
Posted by gardenvariety-hoosier at 5:16 PM 2 comments: