Typically the hottest and one of the driest months of the year here in the temperate midwest and plant life is showing signs that it is past its prime.  Already I'm seeing dead leaves on the decks, there's signs of insect damage on trees and most other plants.  Much of the garden looks a little worse for the wear at this point.  That's not unusual.   I've found that many of the annual vegetable plants have a sort of recovery by September and produce more good things to eat.

That certainly won't be the case with the tomato plants.  The disease problem was discussed in an earlier post.  I'm still not sure if the tomatoes got early blight or a bacterial disease.  From what I know about blight, it infects the entire plant, foliage, stems, and fruits.  This infection appears limited to the foliage.  Of course that's enough to kill the plant, but since the leaf browning moves up the plant some tomatoes have had time to ripen up.   Eventually the foliage wasting consumes the entire plant. 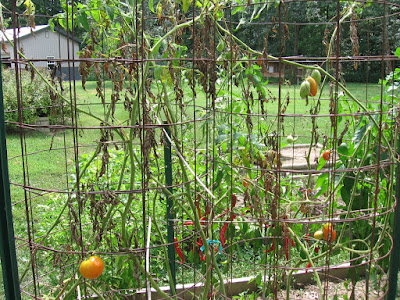 It was time to take them out.  There's no point in keeping plants that will just propagate more disease.  But first I picked any tomatoes that looked like they had a chance of ripening.  Whatever is killing the plants does not seem to affect the flavor development of the tomatoes.  With the addition of some tomatoes from the market I should be able to make a batch of salsa soon. 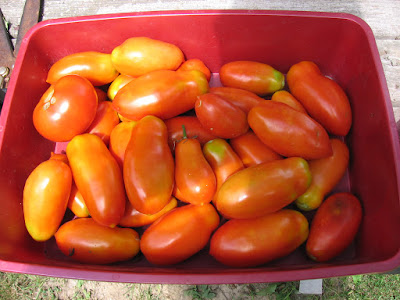 The plants were removed to the other side of the lot where they will be burned.  Now the peppers and eggplant have the bed to themselves.  The eggplant was planted between the tomato cages and hasn't done much, only one eggplant so far.  Maybe with more light they will grow. 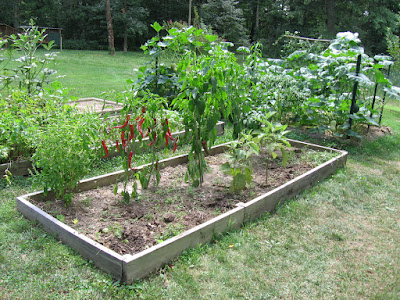 This is the earliest I've ever had to remove tomatoes.  Next year will require a different strategy, with smaller cages that hold one plant each, set far enough apart so the tomato plants don't touch.  Then I can trial a number of different varieties and maybe find some that are resistant.

The pole beans mostly stopped producing.  The Fortex especially are a tangle of stems near the top of the trellis.  This is also where the Japanese beetles do the most damage. 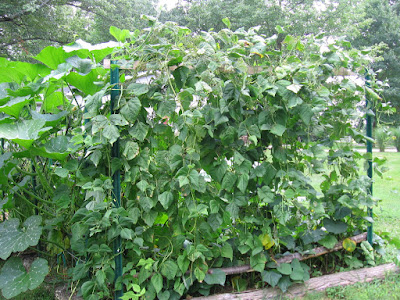 I removed a lot of the older foliage. The newer vines that originate near the base were trained up the strings.  I'm hoping that the beans get a 'second wind' and start producing again. 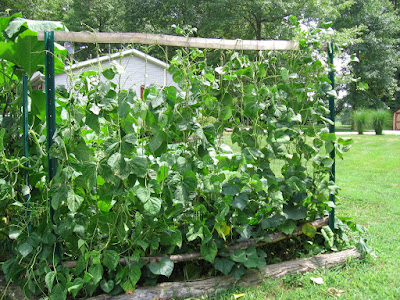 This bed is a jungle, with beans, winter squash and sweet potatoes vining all over each other.   The summer squash is another thing.  I usually only plant one summer squash since they produce so heavily.  The squash that was planted in the spring succumbed to the borer after giving me some nice zucchini.  That one grew like a monster until it stopped.  I planted this plant a few feet from the first one and it has been slow getting started, but is coming along now.  Why would this squash grow so slow compared to the first one?  I have no idea. 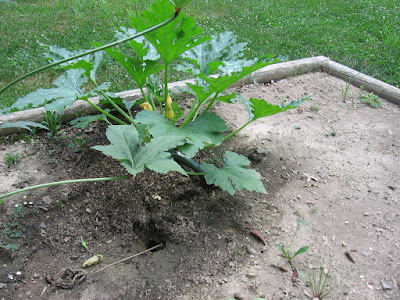 The hole in front of the plant is a mole pop-hole.  I can hoe it over but the mole will just open it up again.  When I water the bed the water runs in the hole like a drain.  I usually jam the hose into the opening and give Mr. Mole a wet welcome, not that it will stop him.

This is Joe Pye weed, a native 'weed' that can get over ten feet tall, which grows where my lawn ends.  It's flowers are an incomparable attracter of tiger swallowtail butterflies, a striking yellow butterfly with black stripes on the wings.  I've seen hundreds of these butterflies feeding at a cluster of these plants. 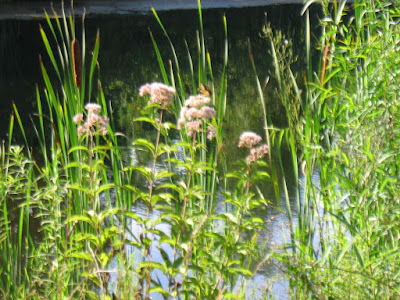 The female of this species has a dark morph that is less common than the yellow version. I was lucky enough to spot this one when I was taking pictures. 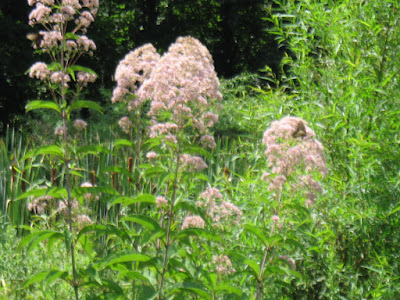 Posted by gardenvariety-hoosier at 9:53 PM 4 comments:

Despite the diseased state of the tomatoes, I actually got a harvest of sauce tomatoes.  At just over six pounds it is not much, but combined with some Big Beef slicers it was enough to make some marinara sauce.  The sauce tomatoes are Super San Marzano. 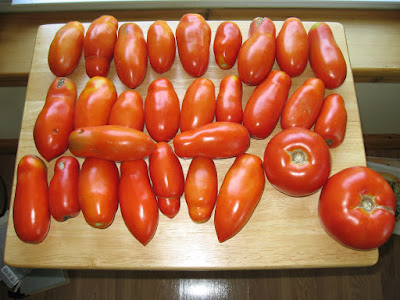 This is the first time I've canned marinara sauce. I would have made salsa but the sweet peppers - Carmen and Mama Mia Giallo - are at least a week from full ripeness.  I grill the sweet peppers then remove the seeds and skin to make a pulp that is blended in with the tomatoes for the base.  This makes a smooth rich-tasting salsa that is hard to beat.  Since the tomatoes are nearly finished I'll have to buy a batch of sauce tomatoes to make the salsa.

I got five pints of marinara sauce.  It has lots of fresh basil and oregano.  Two fresh limes were used for the acidifier.  I have no idea how it will turn out. 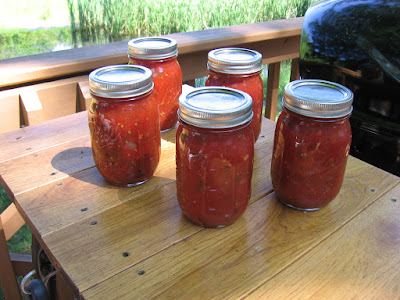 Just under three pounds of beans were harvested.  Production from the pole beans is tailing off.  I need to remove some of the tangled, beetle damaged foliage and let the plants establish some new foliage.  They should get a 'second wind' and start producing again. 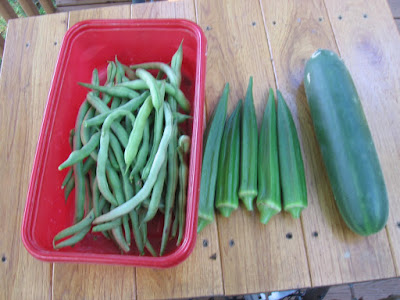 Okra and Diva cucumbers have been producing consistently.  The okra has been steadily ramping up production.  This week I harvested 1.6 pounds of okra, which is actually quite a bit of okra, probably at least twelve pods.  I've been pickling it with hot peppers.   As the okra reaches peak production later in the month I plan to bread it, blanch it in the oven and freeze it. 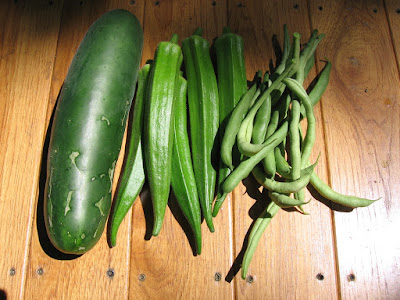 I wish I could say the same about the Calypso pickling cucumbers.  Last year they went wild, this year there is a trickle.  I've made 5 quarts of refrigerator pickles so far, but I'm waiting on enough to make a gallon batch of lacto-fermented pickles.  The vines are looking hopeful after the addition of some compost at the base. 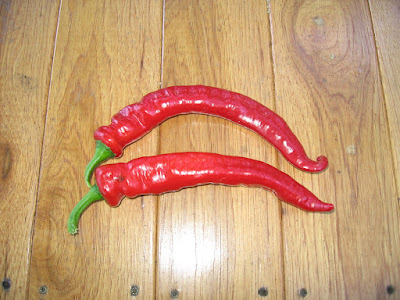 These peppers make a good snack, like eating some berries, but these two topped a grilled pizza.  This is my second attempt at making pizza on the charcoal grill.  Even though this one turned out better than the first one it is still a work in progress.  It looks like I will have to try making this on a pizza stone.  Too many things can go wrong when cooking directly on the grates.  It may look a little messy but it was quite good, with lots of fresh basil and those peppers. 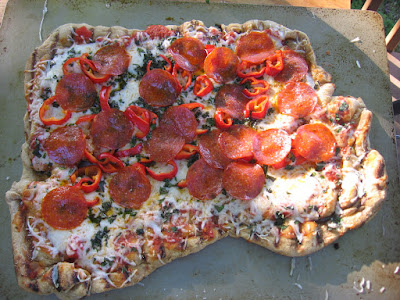 To see what other people are growing head on over to http://www.ourhappyacres.com/
Posted by gardenvariety-hoosier at 4:01 PM 6 comments:

Lots of new stuff in the last two weeks to show.  The beans are coming in strong now.  This picture from last week's harvest shows Provider, Fortex, and the new bean on the block, Kentucky Blue, a cross between Kentucky Wonder and Blue Lake. 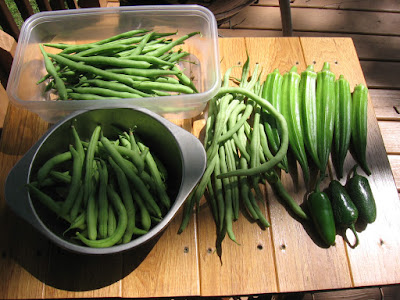 I kept them separate in order to try out the Kentucky Blue's.  It's a good bean that tastes more like Blue Lake, the most common commercial frozen bean, than Kentucky Wonder.  But it's not as good as Fortex, and doesn't seem to be as productive.  I always try to plant at least two different varieties of pole beans as insurance.  Last year was a terrible bean year.  The Fortex did poorly but the Marengo Romano's did well.  Unfortunately the yellow beans were terrible after freezing.

There were more beans, nearly nine pounds over two weeks.  The Providers are mostly done, but the pole beans are producing heavily.  Now I mix them together and most get frozen. 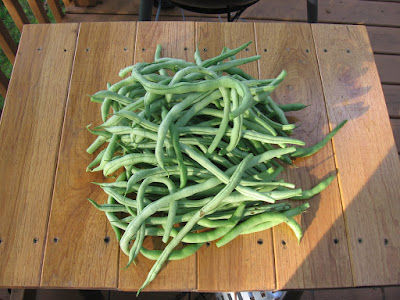 Okra has been coming in as regularly as the beans, several pods a day.  I've pickled two quarts now, always with hot peppers.  Hot pickled okra is my favorite pickle. 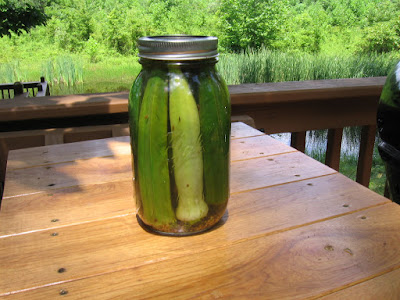 Okra is tricky to harvest.  If it is growing very fast it can get large without getting woody, but if it's growing slow it will get woody before sizing up.  And okra can go from tender to you can't cut it with a power saw very quickly.

The first tomato, a Big Beef that weighed over a pound, came in a week ago.  Company was over and the tomato was sliced and eaten before I could get a picture.  So this is the second tomato of the season, a twelve ouncer. 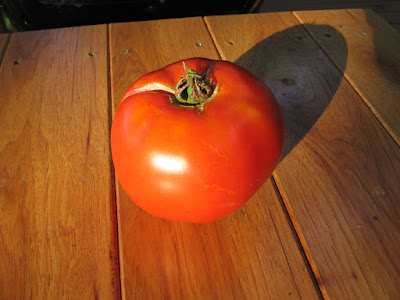 The onions were judged cured by the sun, and since rain was on the way the tops were cut off and the bulbs were bagged.  Twenty-three pounds of Ruby Ring and Red Long of Tropea.  Not bad. 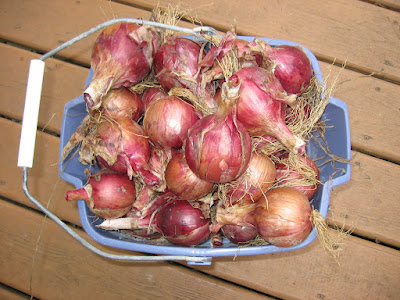 Also 37 pounds of potatoes, shown in an earlier post.  Strawberries are resuming production, although it looks like the birds get as many as I do.  The Autumn Bliss raspberries are starting to ripen. 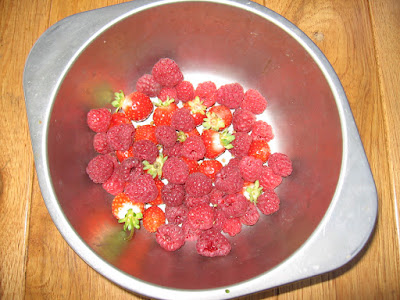 I also got three Calypso pickling cucumbers and one Diva slicer.  The pickling cucumbers are not coming in fast enough to make a batch to ferment.  The vines are looking better and I'm hoping that enough to fill a gallon crock will ripen this month.  Last week, 47.4 pounds (including potatoes) and the recent week 32.4 pounds (including onions).  To see what people are getting from their backyard gardens go to http://www.ourhappyacres.com/.  Get out there and get your hands dirty!
Posted by gardenvariety-hoosier at 5:57 PM 4 comments: