When will it end?

The American Midwest is in the grip of yet another polar vortex, a long dip southward of the jet stream that carries cold arctic air into the region.  At least we had a stretch of moderate weather between the last vortex and this one, enough to melt most of the snow and clear the roads.  This being February, this cold snap is not nearly as bad as the last one, but it is much colder than average and the ground is frozen solid. 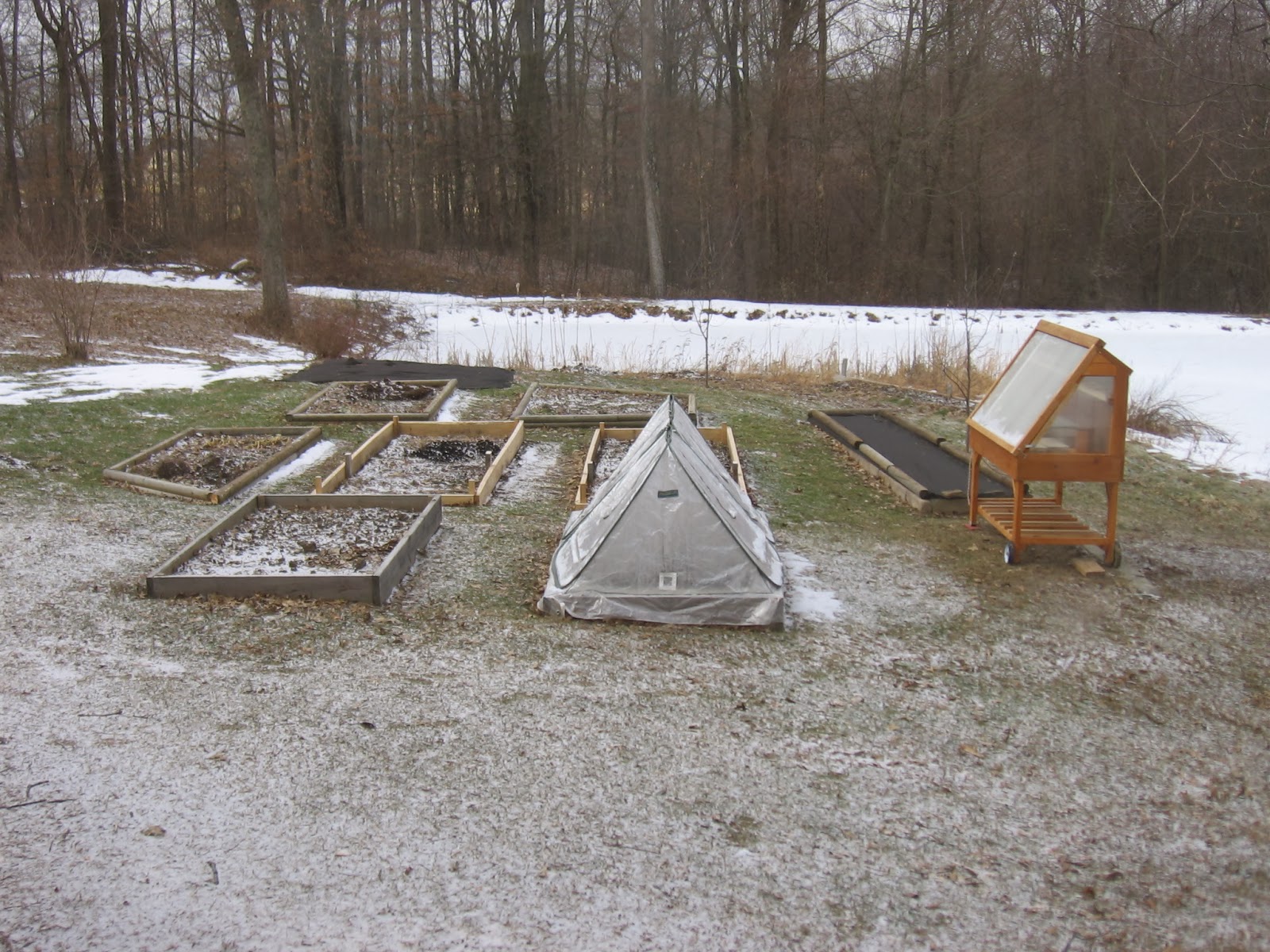 The beginning of plant growth, what we think of as Spring, will obviously be set back several weeks.  The spinach I planted last October that overwintered inside the plastic greenhouse is showing a little growth.  Usually by this time it would be larger, but whenever the weather breaks it should grow quickly.  At least the soil inside the greenhouse is no longer frozen. 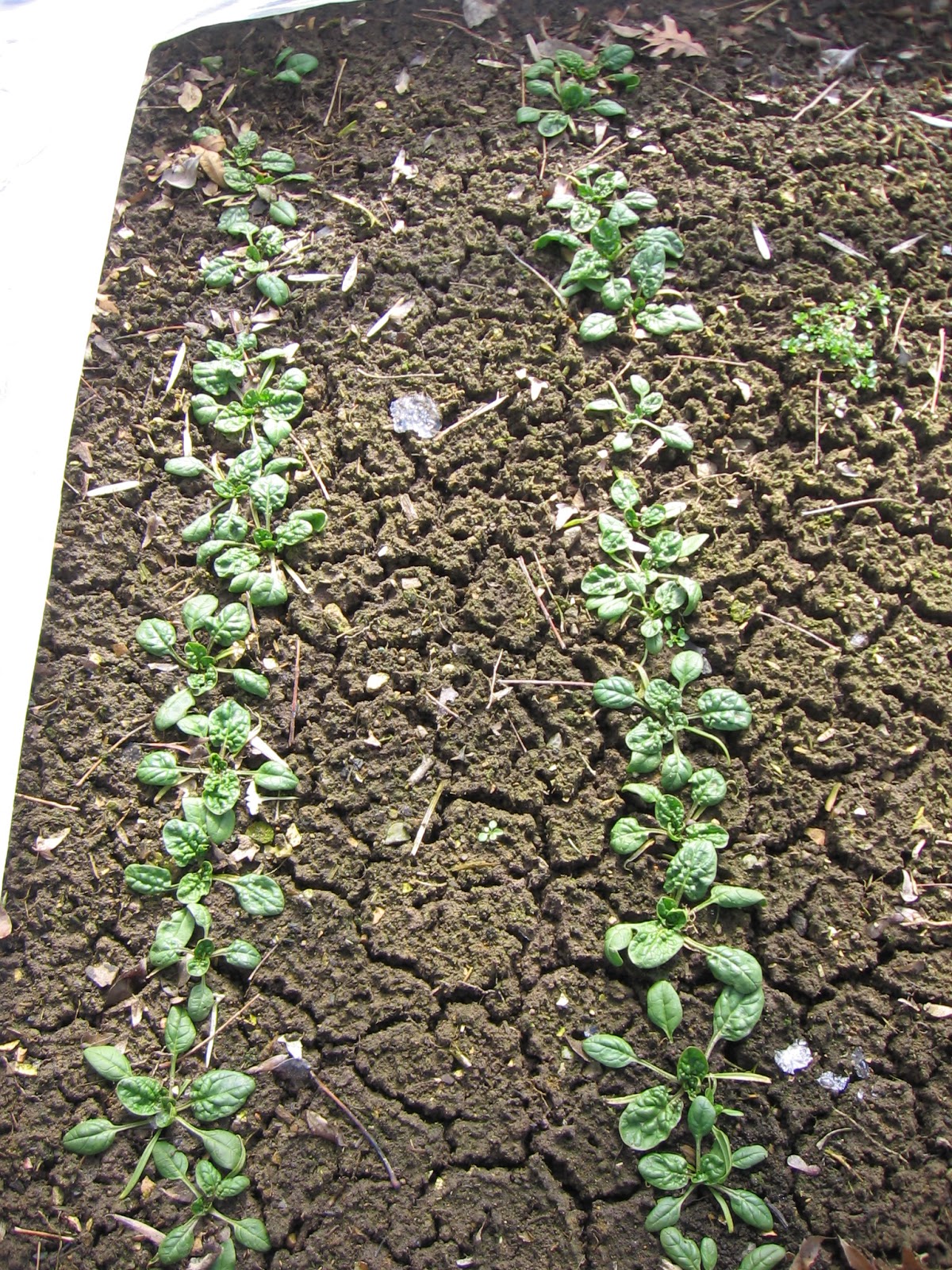 The schedule for starting seeds was pushed back about two weeks.  A few weeks ago I assembled the seedling rack.  Since I had a set of casters stored in the minibarn that were taking up space it seemed like they might as well go on the legs of the rack as this thing when loaded is heavy and hard to move. 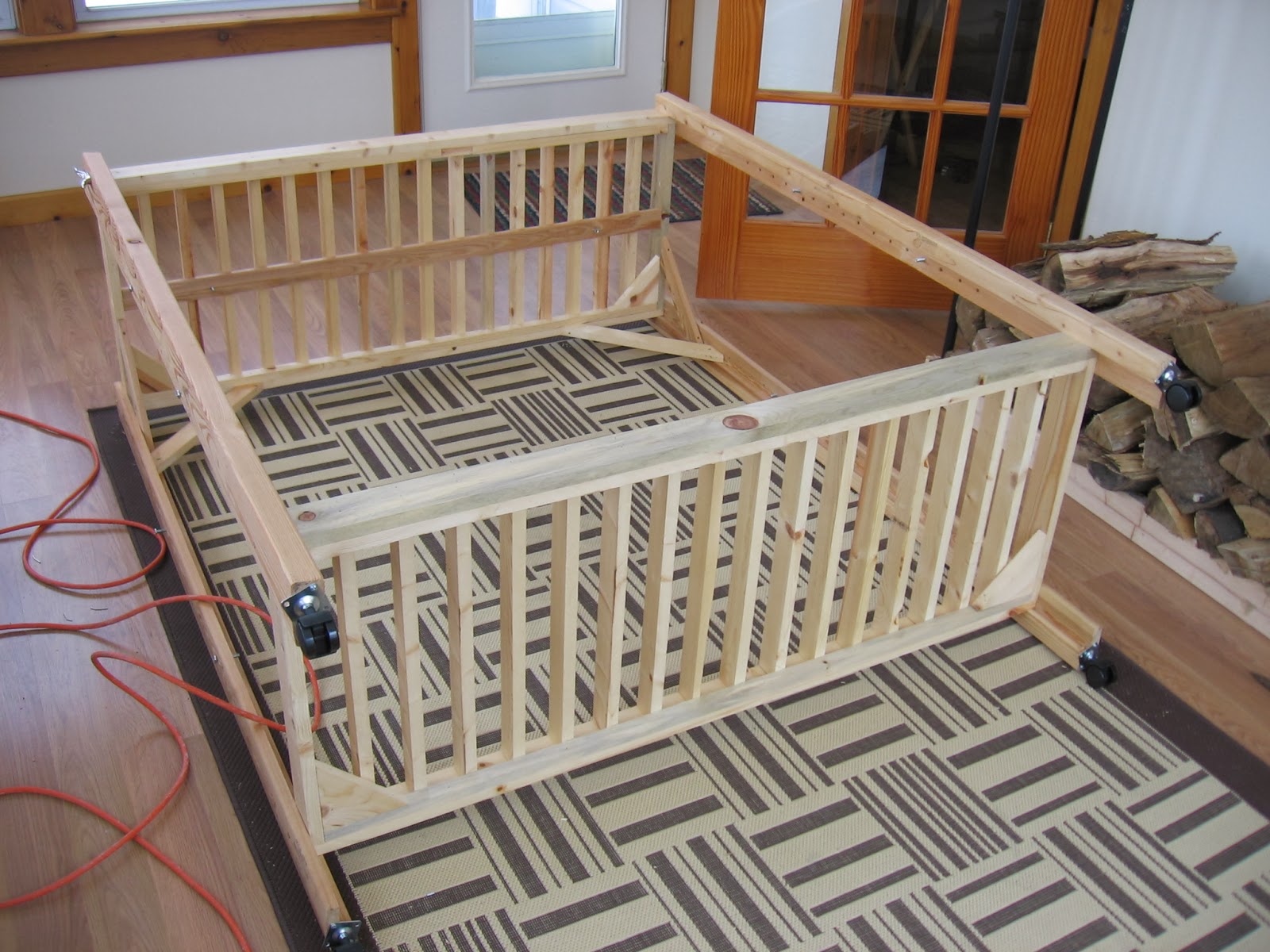 The top and bottom shelves are fastened in place with screws while the two middle shelves can be moved to any number of positions.  I had some leftover Reflectix insulation from the cold frame project and attached that to the back side of the unit.  This will reflect some light back onto the plants.  The light unit has four 32W T8 lamps.  Two of the lamps are GroLux bulbs (which look purple) and the other two are 8000K bulbs.  This light setup gave very good results last year - thick bushy seedlings. 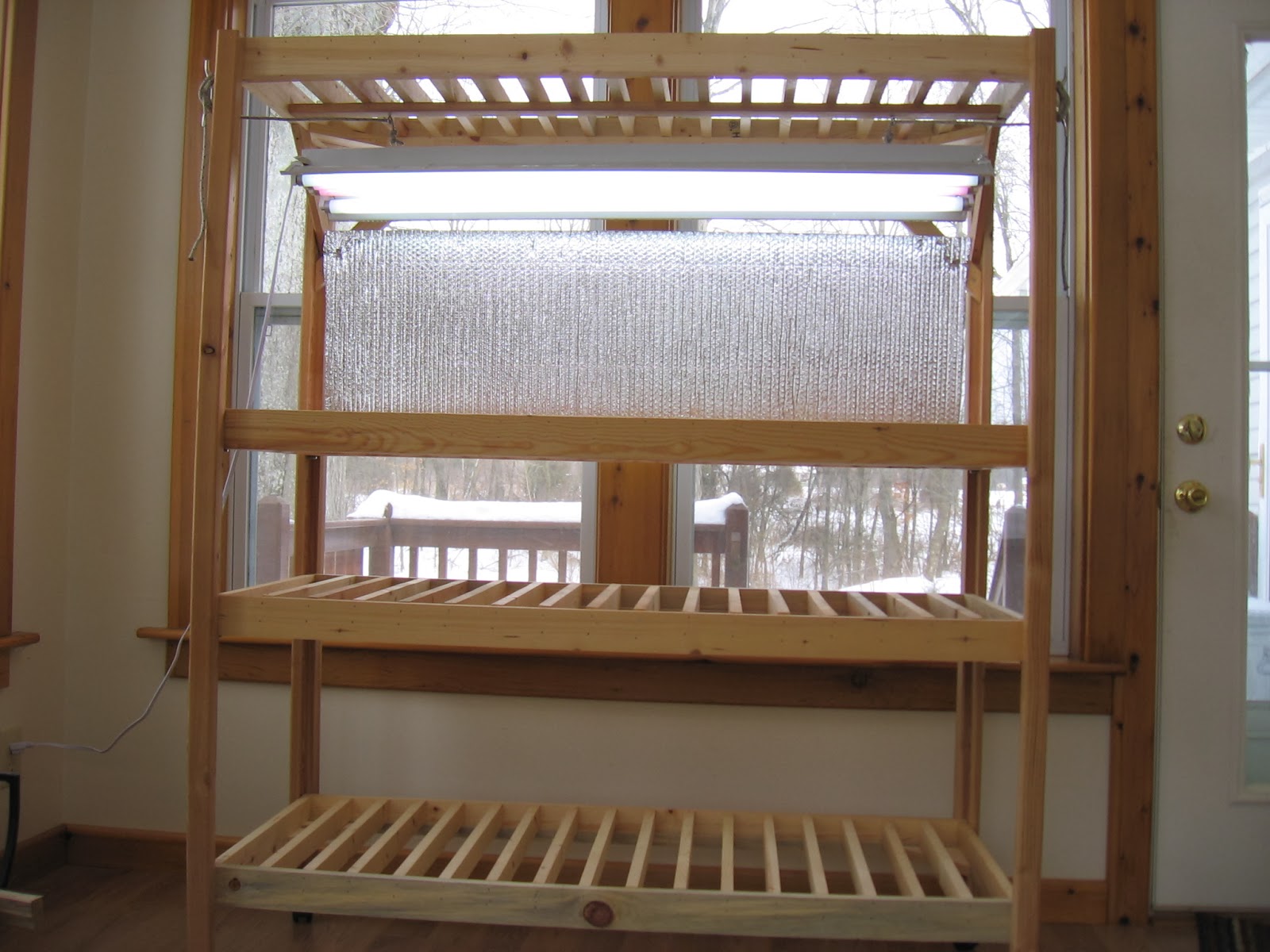 For my take on lights and plant growth here is the link to an earlier post.

I seeded some lettuce about ten days ago.  Last week I seeded two flats of Ruby Ring onions, and two days ago I seeded the first set of brassicas - broccoli, kohlrabi, cabbage and tatsoi.  When ready they will go into the plastic greenhouse.  After the onions germinate and the weather moderates (it was 6 F this morning) I'll put the onions into the mobile coldframe.  That will clear space for more seedlings.  The growing season is getting underway, slow but sure. 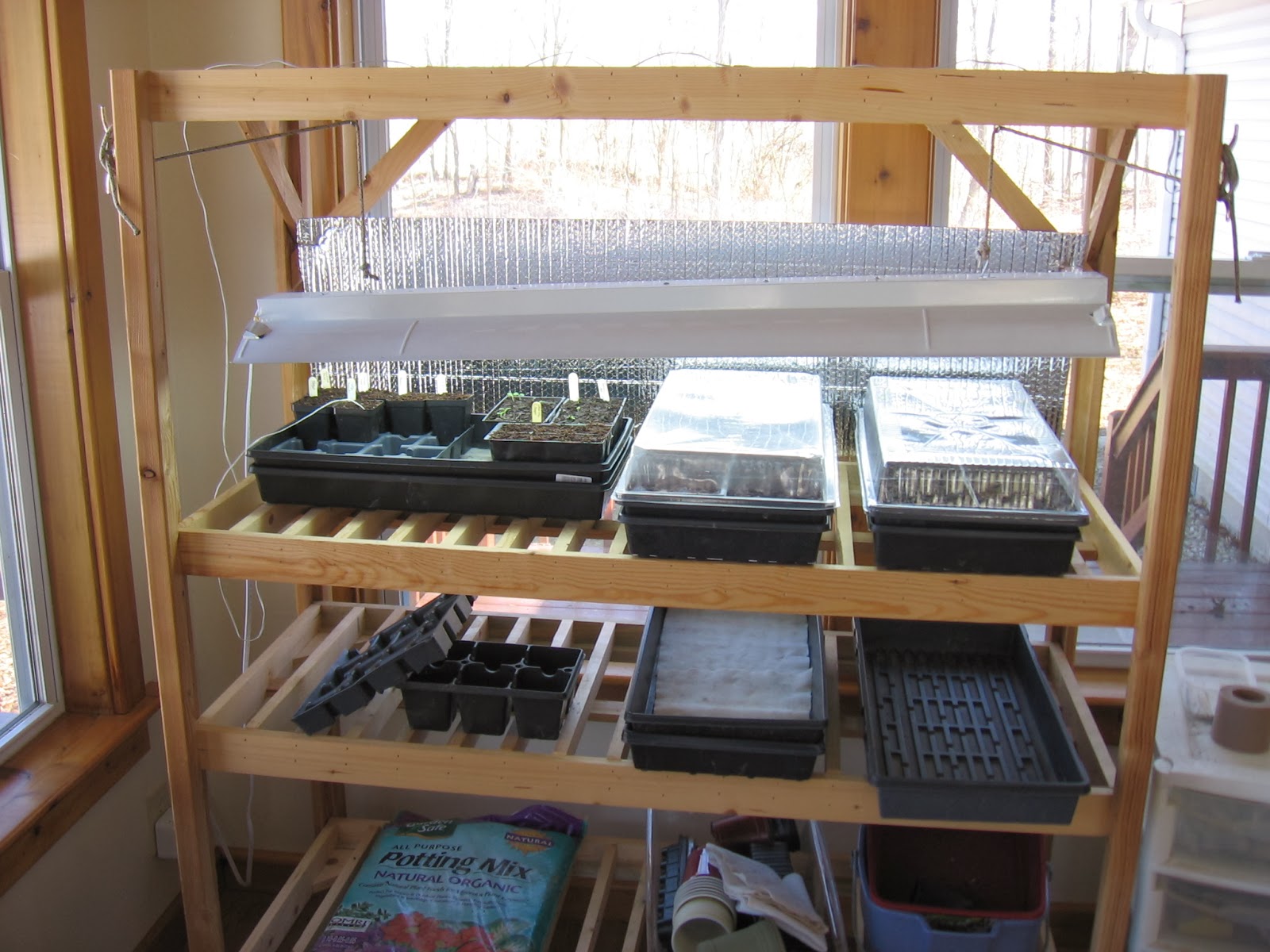 Posted by gardenvariety-hoosier at 3:35 PM 5 comments:

Greenhouse on Wheels - New and Improved


Last winter I built a wheeled greenhouse/coldframe/potting bench hybrid.  My goal was to build a mobile cold frame with the performance of a greenhouse.  Empty, it should be light enough for one person to move.  It also had to be well insulated and with some stone or water inside able to maintain temperatures above freezing for one or two cold sunless days.  It performed well enough to keep the inside above freezing for at least one day following a sunny day, although last spring there were often several consecutive cold and cloudy days.   This picture shows the unit with the door propped open.  There’s an earthbox inside and a block of stone to absorb and store solar heat.  The little box held a remote temperature sensor. 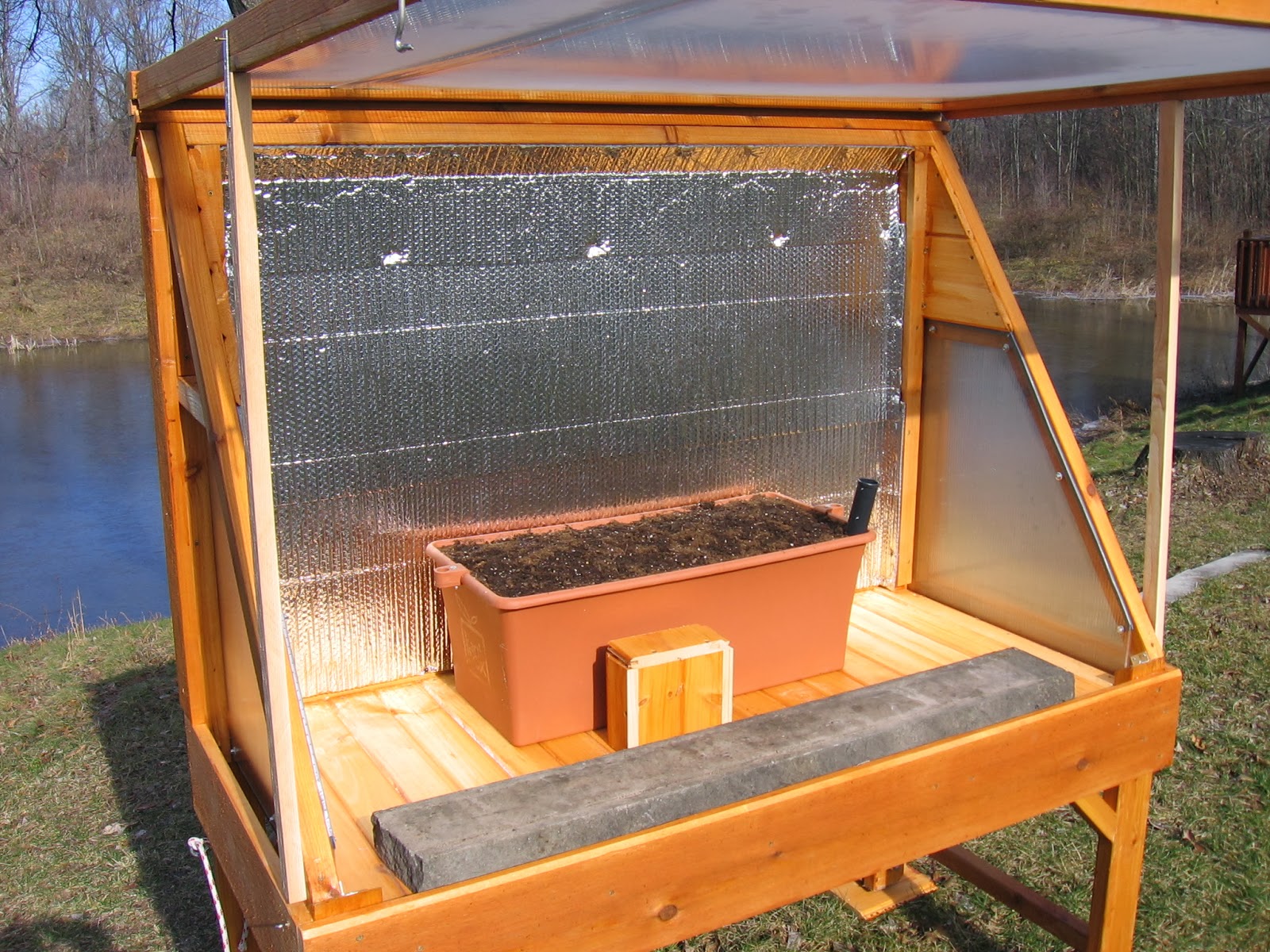 This is what the greenhouse looked like in the back yard last March.  The glazing is made from twin-walled polycarbonate.  Commonly used in greenhouses in place of glass, it is very transparent, lightweight,  nearly unbreakable, and with two walls has insulating properties similar to insulated glass. 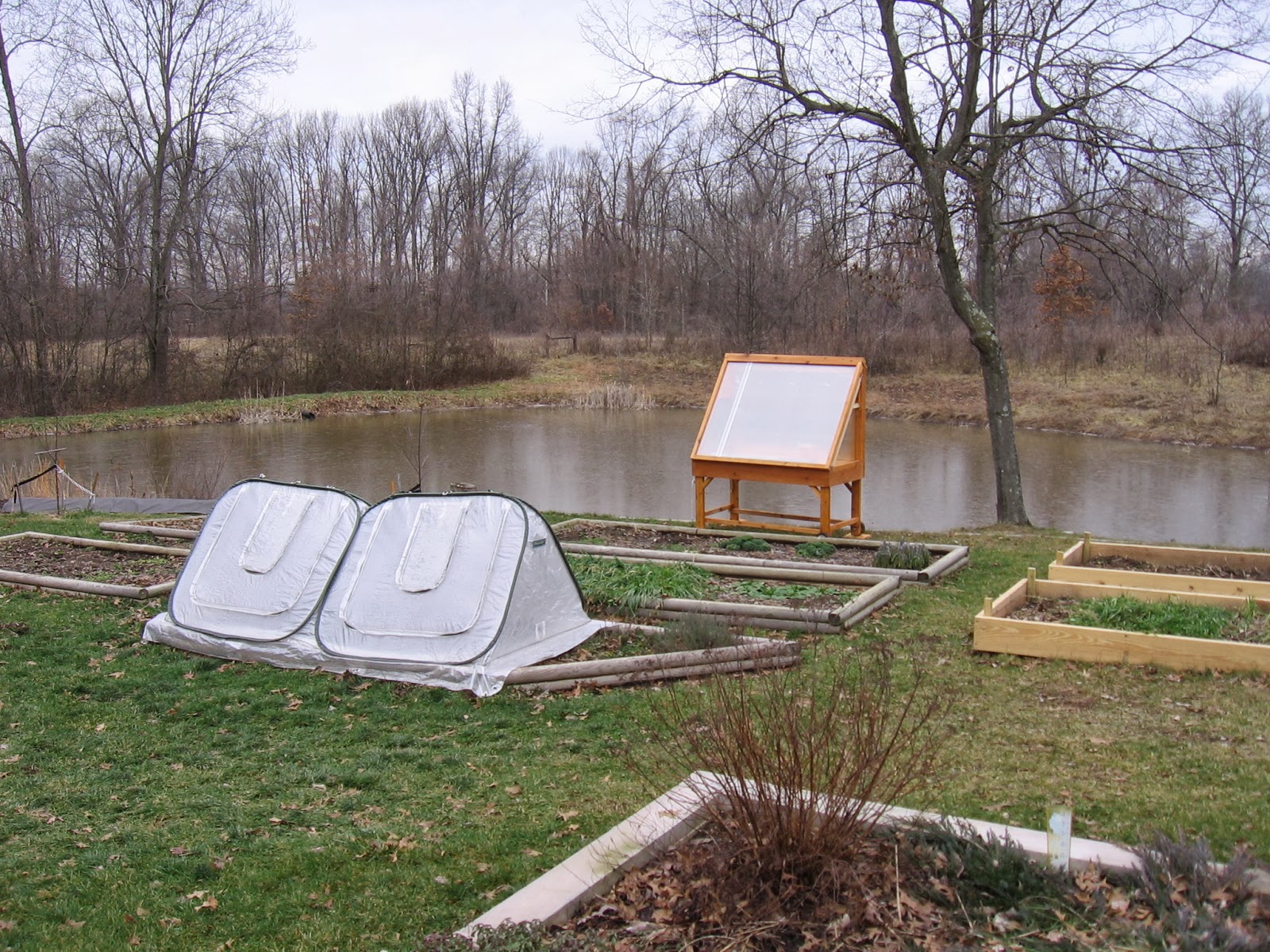 The greenhouse was built from concept as a prototype.  It’s like trying to pull an idea out of thin air and then turn it into something made of real materials – you never know quite where it is going or how it will get there, you just have to sense the right path and follow it.  The end product had some flaws, for sure, although overall I was pleased with its performance.  and I hoped to sort them out after the first season.


I found that its biggest flaw was it’s height.  At about 6 feet high it was just too tall.   It wanted to tip over when I moved it, and there was always a concern that a strong gust could blow it over.  Here’s another view of the greenhouse from the backside when I was building it.  It’s height not only affected its functionality, it just didn’t LOOK right.  You could put a billboard on that backside. 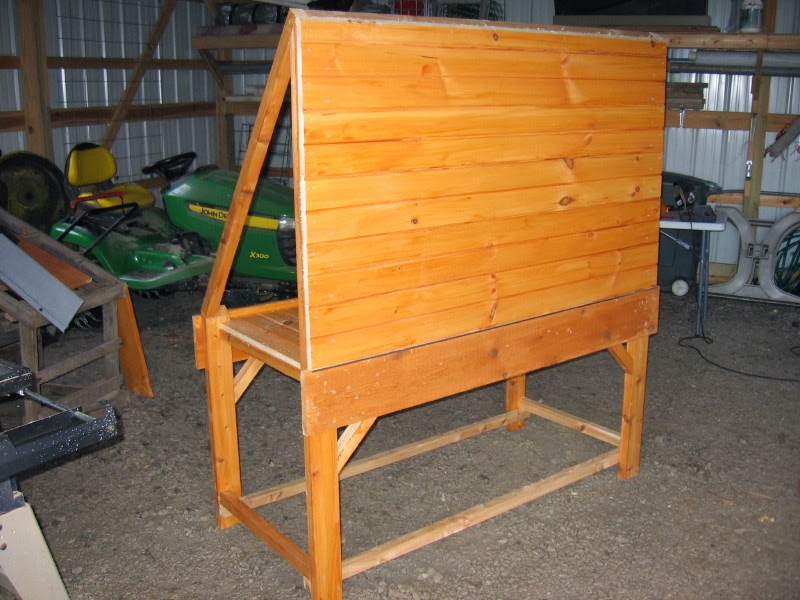 That high peak needed to be cut down to size, and that’s what I did.  After removing the door and the siding that was in the way the top was cut down and reframed, then the siding was put back on. 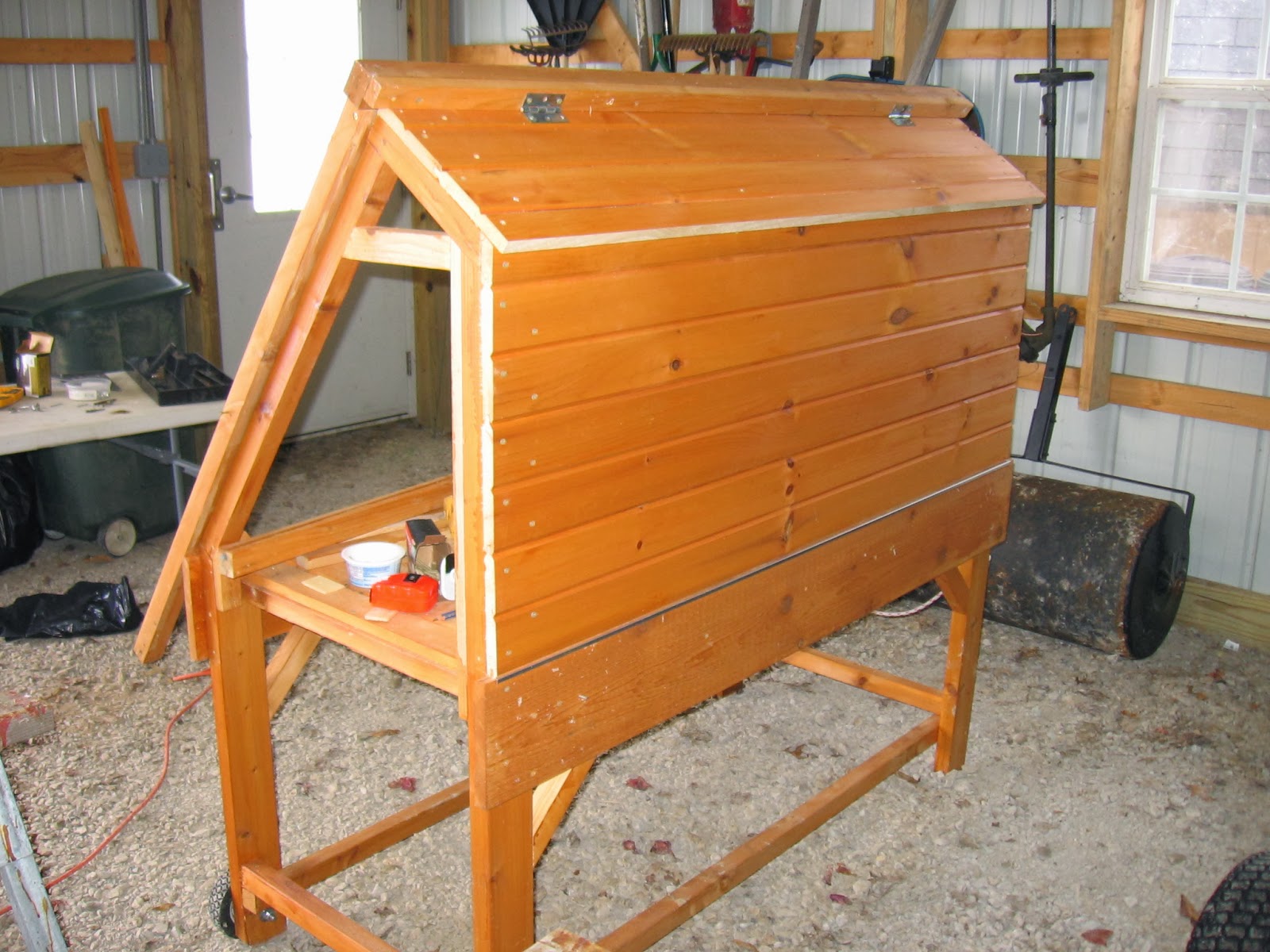 The hinged front panel was now too large, as you can see in this picture where the sides of the panel frame now extend about a foot beyond the opening.  I re-attached the door panel (minus the bottom piece) in order to accurately mark the sides for cutting.  The polycarbonate panels also had to be cut again to fit in the smaller frame. 
The glazing was re-installed.   There was a scrap piece of styrofoam handy  so I cut a piece to fit into the ceiling of the greenhouse.  The more insulation the better, and the peak is where the heat goes. 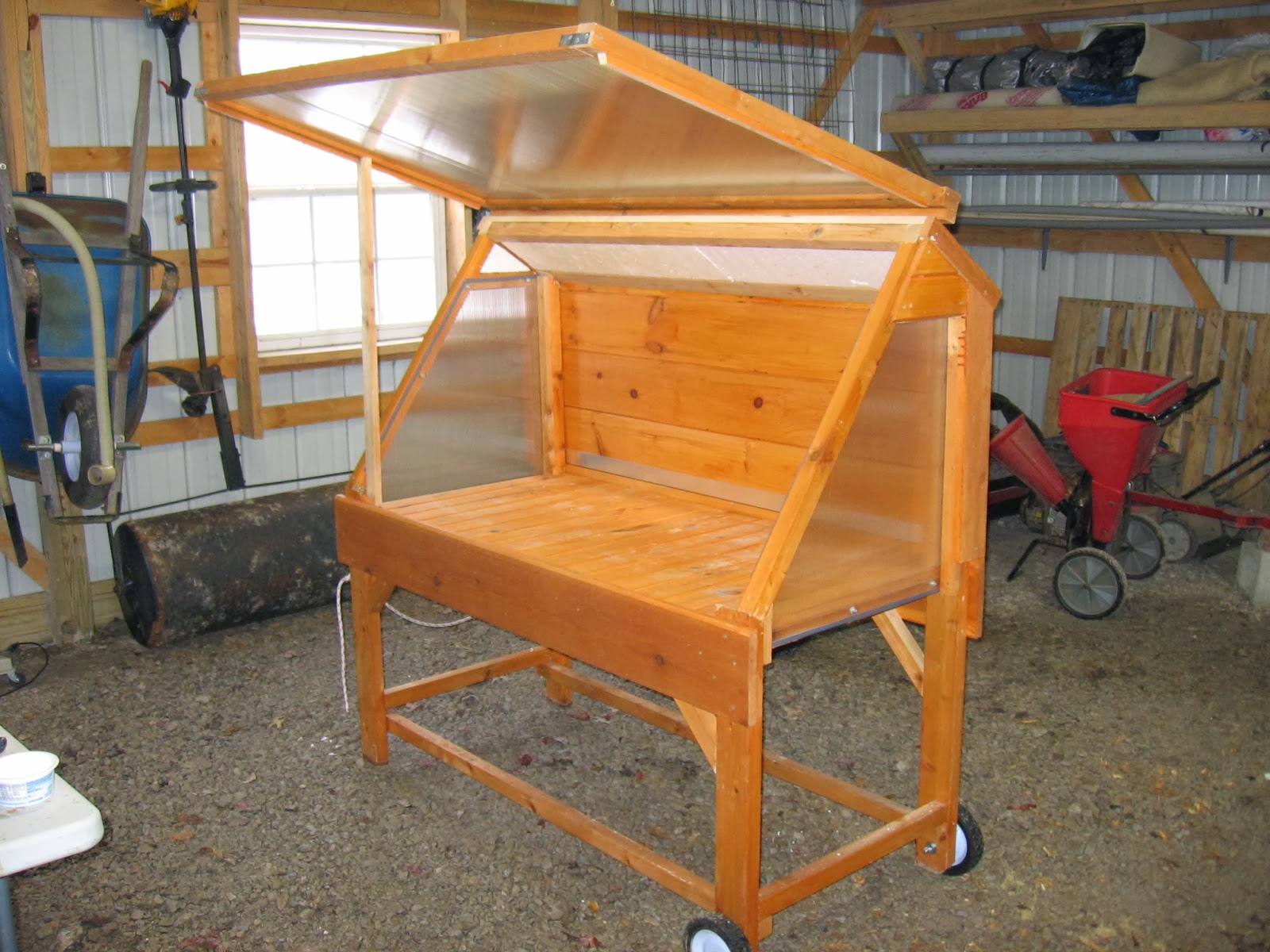 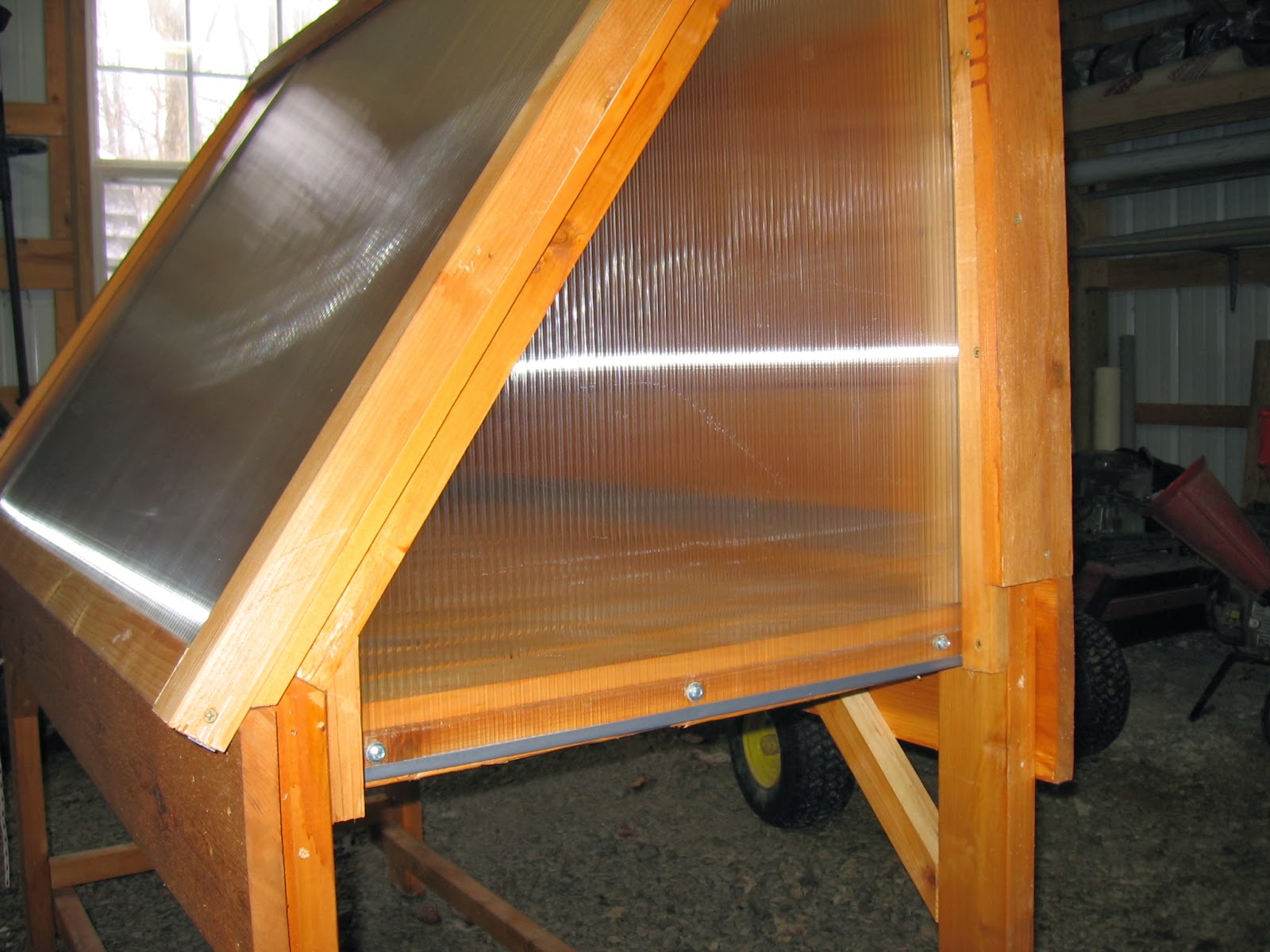 The cedar 1”x8” boards were reattached to the sides.   They hide the screw heads and since there is a gap between the lites and the boards they provide a nice handhold for moving the unit. 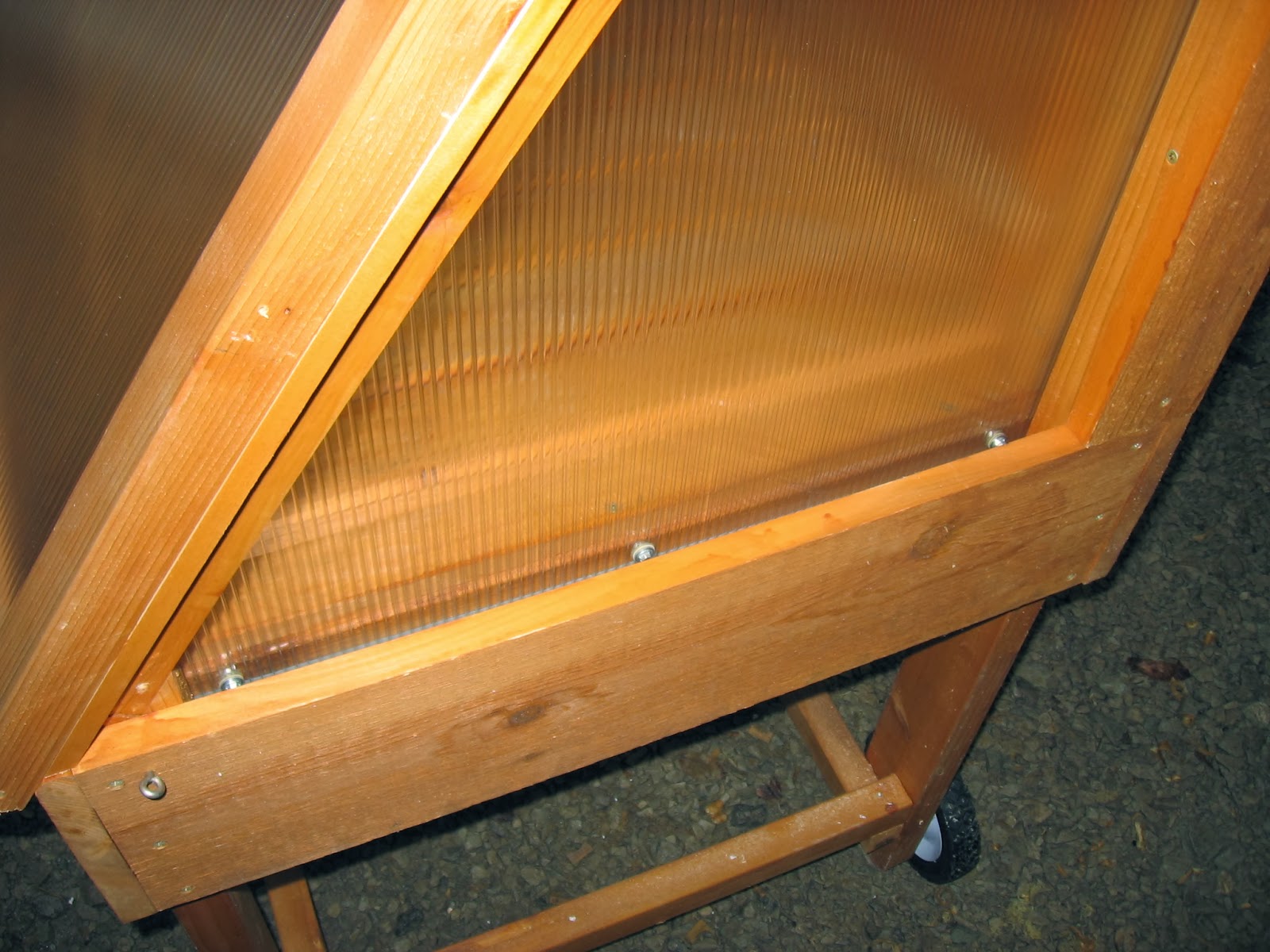 I stapled Reflectix insulation to the back and beneath the bench floor.  This material is like silvered bubble wrap.  It not only adds R-value to the unit but will reflect light back onto the plants. 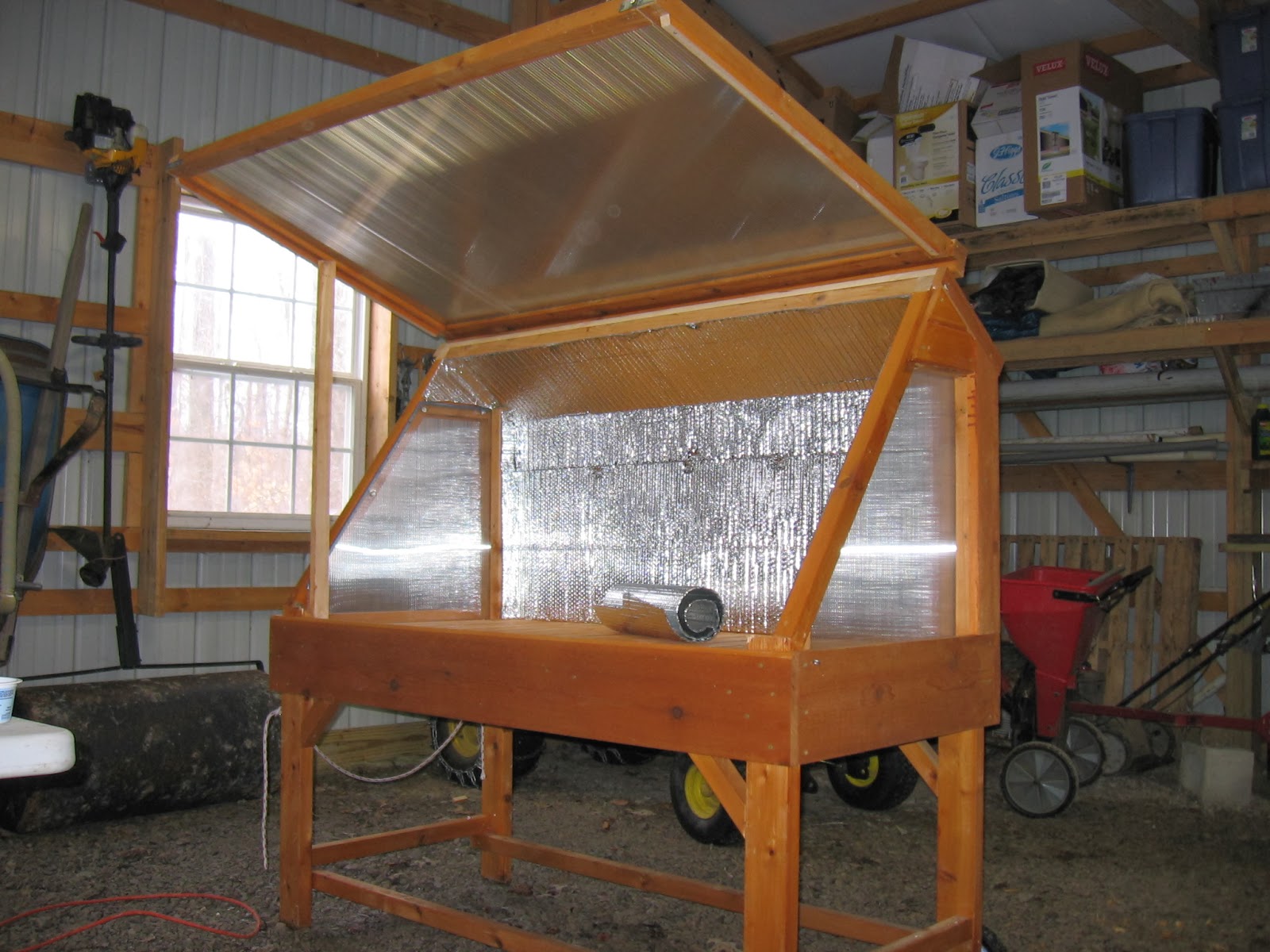 Brackets were installed to hold a wood bar across the back wall.  I plan to set concrete paving blocks on the bench floor as well as stand them on end along the back wall.  The wood bar will hold the blocks in place.  The more thermal mass to store solar heat the longer the greenhouse will hold heat on cloudy days. 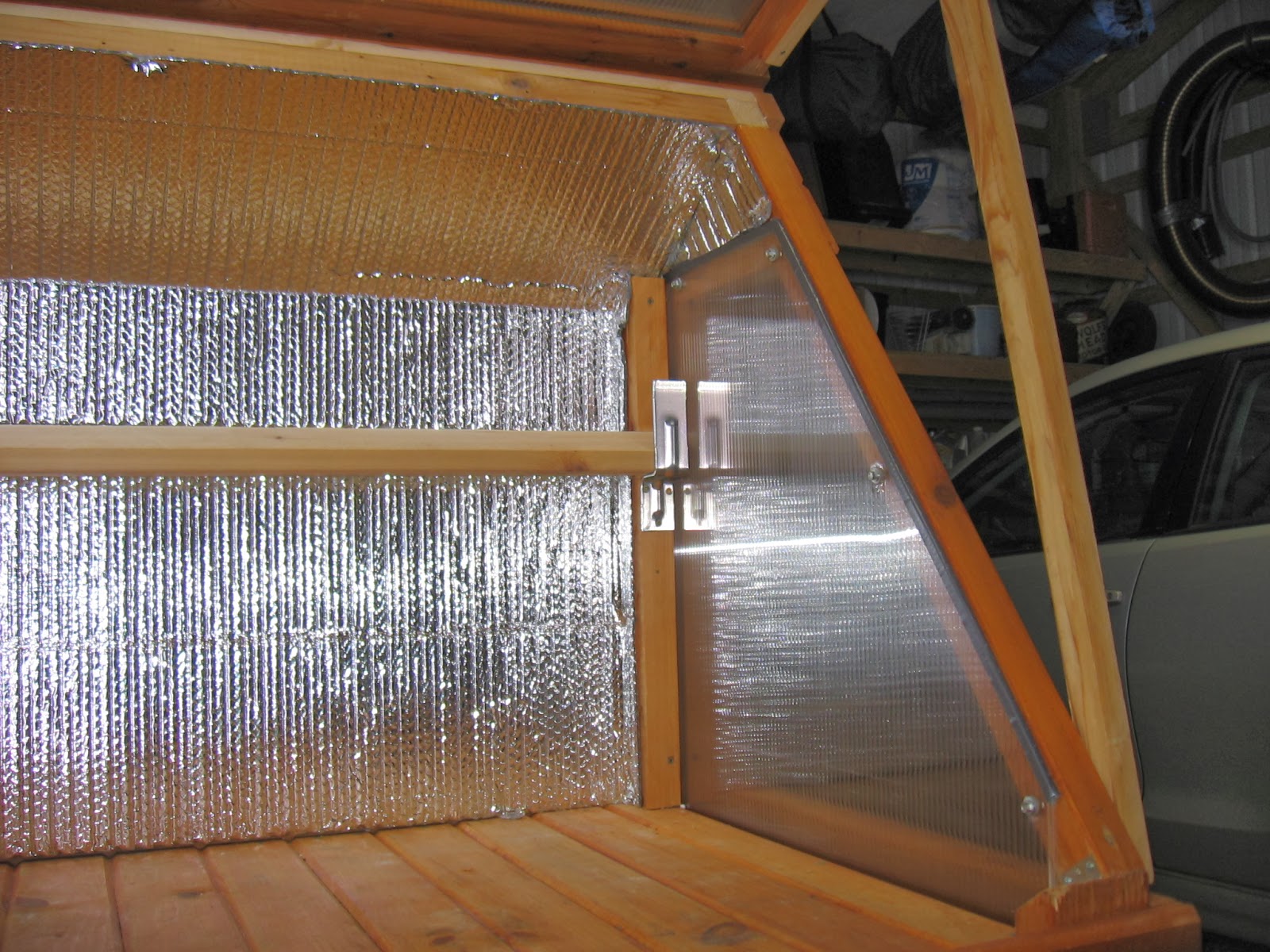 The greenhouse looks mostly finished but one of the most challenging problems was still ahead.  Designing  a closure and lock system for the doors of a small structure can be as difficult as designing the structure itself.  The old props held the door panel only at the fully open position,  I wanted something that would open the door to a number of positions, from open just a bit to all the way up. This is what the old prop set up looked like, adapted to the newly modified unit. 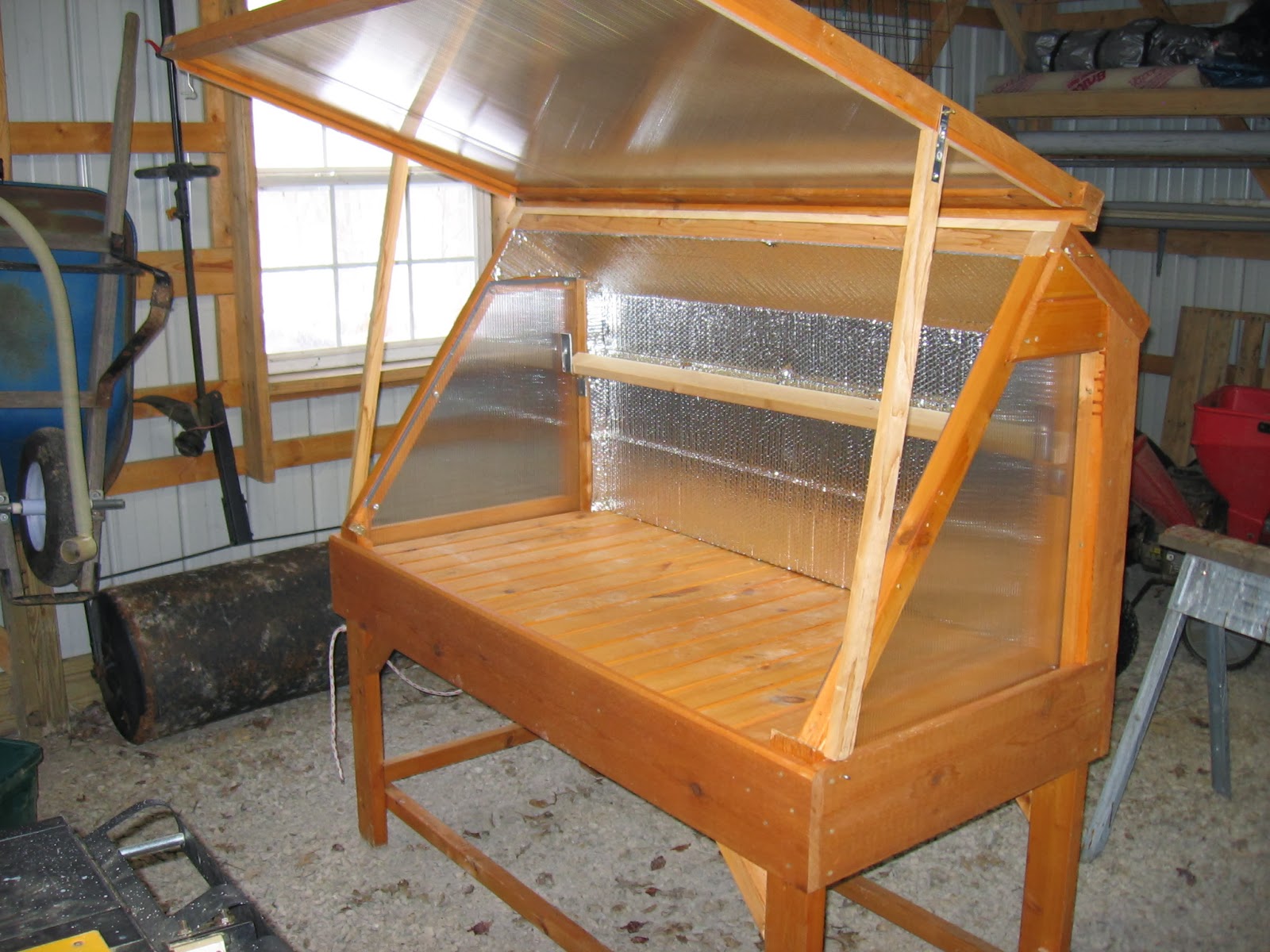 I found that on warm sunny days the greenhouse would quickly overheat with the door panel shut.  Last year I jerry-rigged some pieces of wood inside the greenhouse to prop it open slightly and let the heat escape.  I wanted a functional fix that would hold the door open at different angles and yet fit neatly and unobtrusively into the structure.  Easier thought than done, I tried numerous approaches, none of which worked like I wanted.  Finally I came up with this.  As simple as this system looks, it took hours of experimentation with different arm lengths and pivot points to find this setup.  Here’s the door panel propped fully open. 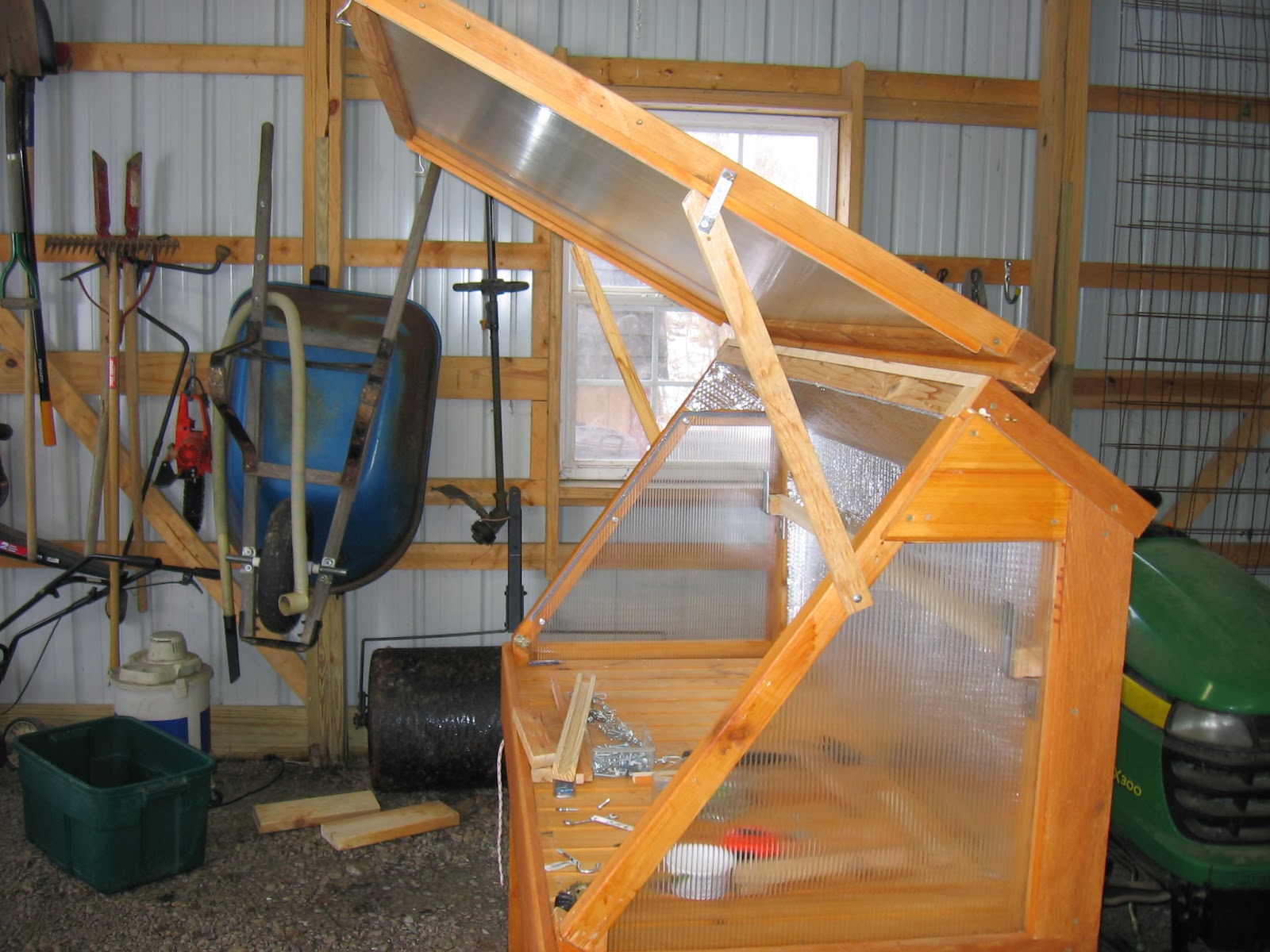 Here’s the panel propped at the first détente.  By golly it’s just about finished.   After several warm days the snow is nearly gone, and once the ground is firm I will wheel the greenhouse into the backyard and set the paving stones inside.  Onions and lettuce have been seeded in the house.  When they are ready they will go into the greenhouse.  It looks like the new season is underway. 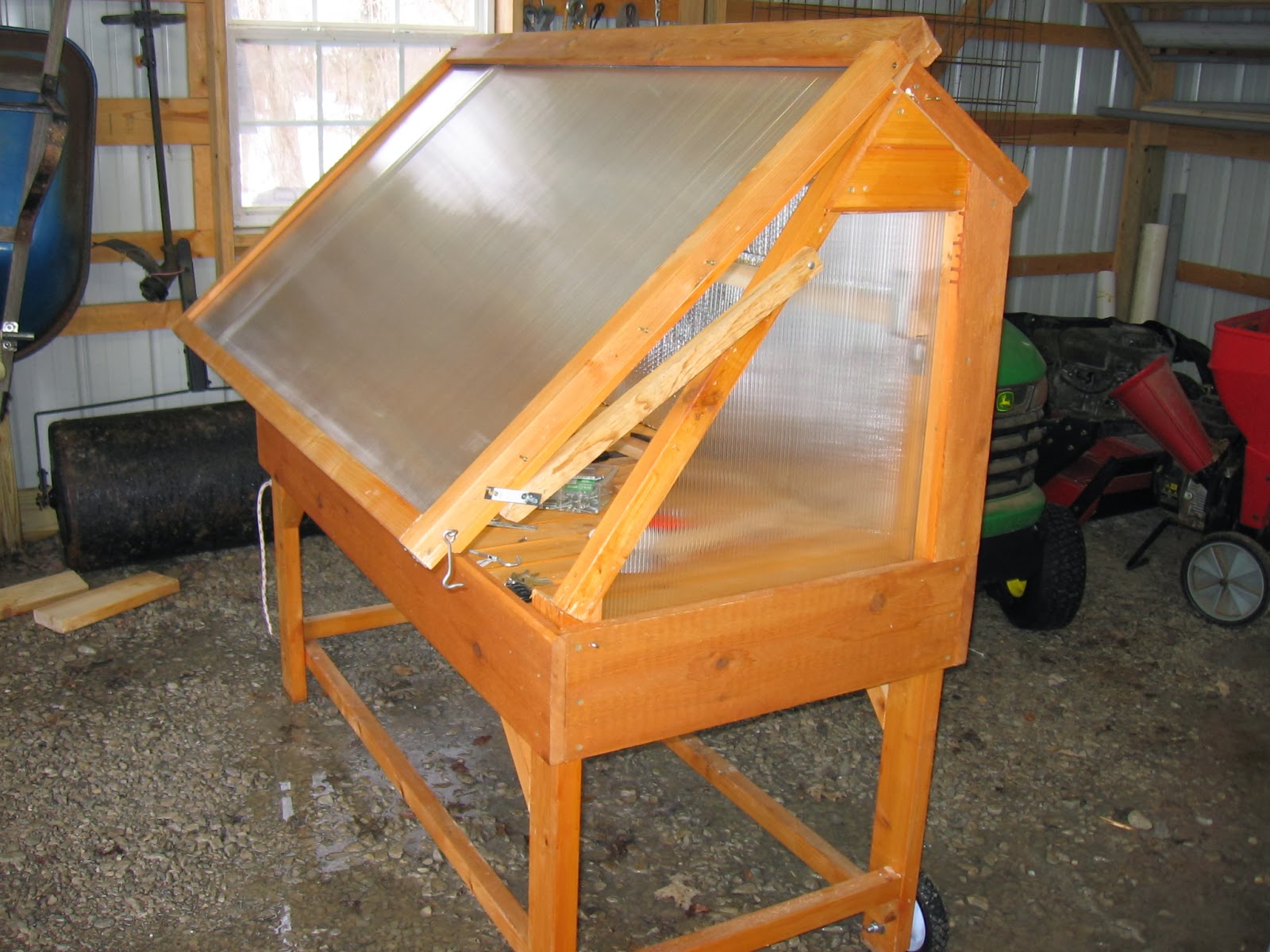