I picked a head of spinach this weekend, that's the harvest.  This is Gigante di Inverno spinach.  A nice 7 oz head, but most of this variety looks 'bolty,' so it remains to be seen if they will fill out.  I planted it last fall because it is supposed to be very cold tolerant. 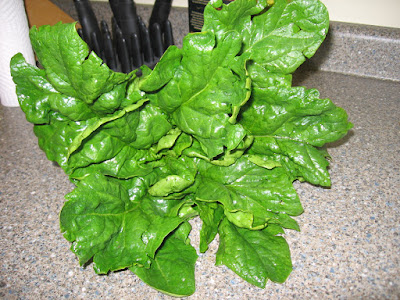 On Sunday the first set of cole crops were planted.  They were getting a bit large under the lights and I wanted to get them into the beds.  I knew that rain was expected that evening but could not get the weather channel on satellite all day to see what was in store.  Well it did not just rain, it was a violent storm that passed through.   There's a good chance that the seedlings will recover even thought they look pretty bad right now.   This is a Gonzalez cabbage seedling. 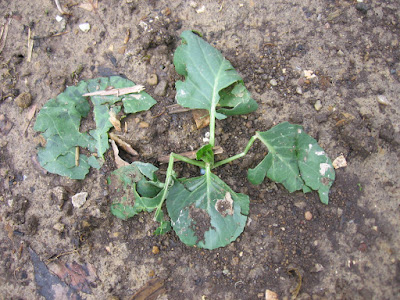 To see what other people are growing head on over to http://www.ourhappyacres.com/
Posted by gardenvariety-hoosier at 6:13 PM 4 comments:

Around the yard in early spring

It's still too early for much to happen outdoors, but the vegetable garden is underway.   Indoors the kitchen remodel is making progress, with the floor nearly finished, awaiting an application of grout sealer.  Then it's time to start putting things together - sink, dishwasher, countertops. More on that later.

The largest bed is for squash, sweet potatoes and potatoes.  About 10 days ago most of the bed was lightly tilled than seeded with oats and field peas.   Compost, a bit unfinished, was spread over everything.  The cover crop germinated and seedlings are coming up.  Since it will be nearly two months until planting I'm hoping the field peas, which were inoculated, will 'fix' some nitrogen in the soil.   When it's time to plant the squash and sweet potatoes I'll plant them in small clearings I make in the cover crop. 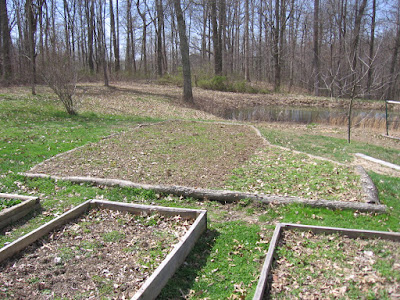 Nothing was done to the section of the bed in the right of the picture.  That's because potatoes will be planted there in less than a month, hardly enough time for a cover crop to establish.  Last year that section grew sweet potatoes.  Once they were out, in mid-October, the soil was tilled, treated with compost and seeded with oats, field peas and clover.

The bed that will be planted with tomatoes and peppers was treated the same way last fall.  I thought about planting the same cover crop that was seeded in the squash bed, but decided to leave well enough alone, since the peppers aren't as vigorous as squash.  Most of this bed is covered with a mat of dead oats. 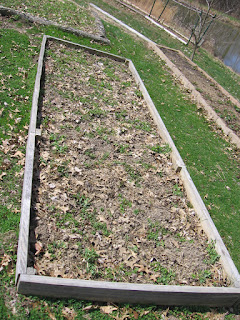 I also noticed that some field peas had overwintered, so they can fix some nitrogen.  There also a few weeds.  I pull a few whenever I get the urge.  The soil tilth is very good, guess the cover crop helps.

Asparagus has not sent up any shoots yet.  Any day now. . .  Half the bed is in strawberries. 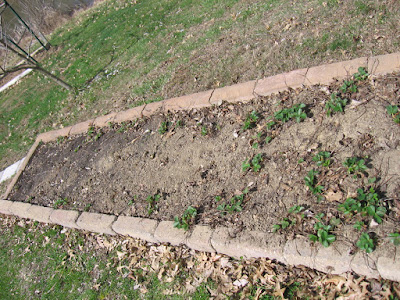 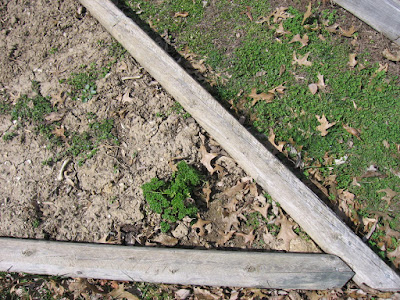 I've harvested about a pound of spinach so far this year, and expect more.  This is overwintered spinach, and there's a row of spring-seeded spinach that hasn't germinated. 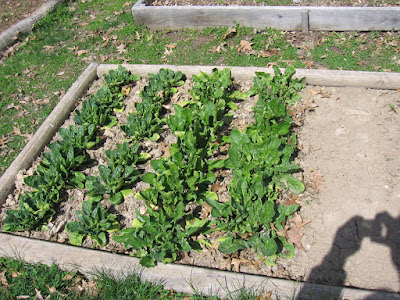 In the mobile cold frame, a batch of lettuce is growing in the Earthbox and there's a flat of red onions that will get planted before the end of the month. 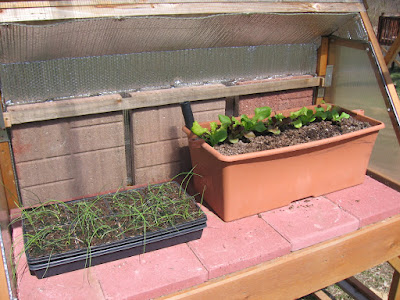 The apple trees have been pruned.  The buds are expanding a little bit so I'll need to spray with dormant oil soon.  Not as much was taken off as last year.  I'm hoping for more than the two apples that were produced last year. 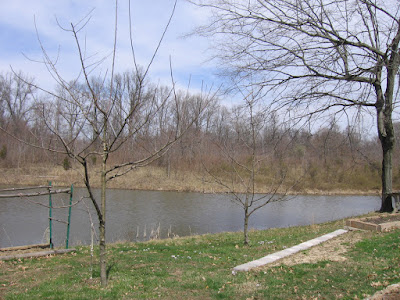 Inside there are seedlings growing under lights.  The first set of cole crops will be ready for planting in the great outdoors very soon.  Another set of cole crops, Tropea onions, and more lettuce have germinated recently. 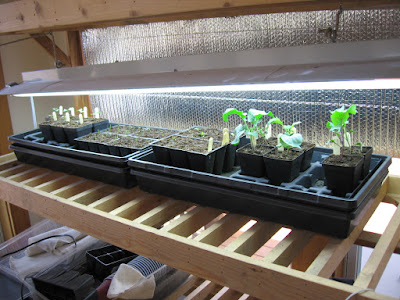 The weather has finally turned for the better, with temperatures more typical of mid-April predicted for the next 10 days.  The window for any more winter-like weather is rapidly closing.  I moved up the timetable a week for seeding cole crops.  It's been a somewhat mild winter and the soil never froze to any depth and is rapidly warming.

Today's temperatures are in the 50's and I realized that I should get outside and get to work.  The first task was spading up the sweet potato/squash bed.  The soil was just the right wetness for turning over, although part of the bed still does not have enough organic content, something I'm working on.  It took 3 goes to finish the spading.  It's hard work.   Tomorrow I hope to break up the clods a bit with the mini-tiller.  Then I'll seed it with field peas and oats for a cover crop, then cover the seeds with a layer of half-finished compost. 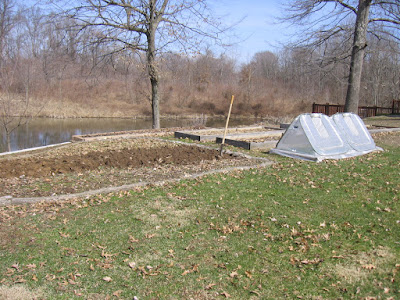 The cover crop will hold until the squash and sweet potatoes go in 10-12 weeks from now, and the peas should fix some nitrogen in the soil.  Guess what I found while spading where the potatoes grew last year?  That's right, I missed quite a few potatoes.  I thought I was thorough, but no.  These are Kennebecs.  They may even be fine for eating, even though some have been sliced by the shovel.  I'll find out. 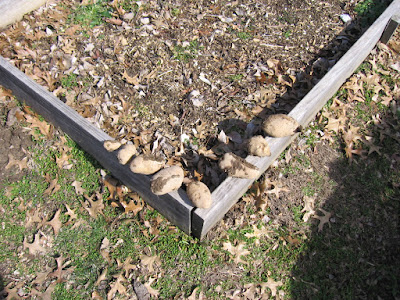 The next task was wheeling the 'mobile cold frame' out to its spot, washing the double wall plastic glazing, and setting the paving stones inside. 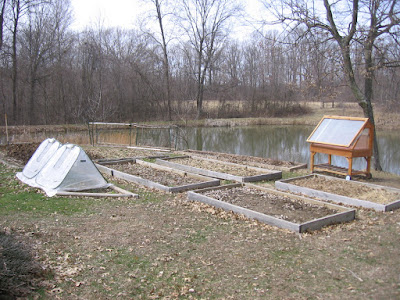 Tomorrow I'll put the tray of onions in the cold frame, then fill an Earthbox with potting mix and set that inside too.  There's 12 cells of lettuce growing under the lights and they will be ready to go into the Earthbox very soon.  I like to get cold tolerant seedlings out to the cold frame quickly, as natural light is much better than artificial, and this also frees up space under the flourescent lamps so I never need additional light units.

The cement pavers in the cold frame soak up solar energy and retain the heat overnight.  The Reflectix insulation, which is like silvered bubble wrap, helps insulate the space and reflects light onto the plants.  It's also underneath the floor.  I have to be careful to keep the window propped open on sunny days, as the temperatures inside can exceed 100 F if the window is kept closed. 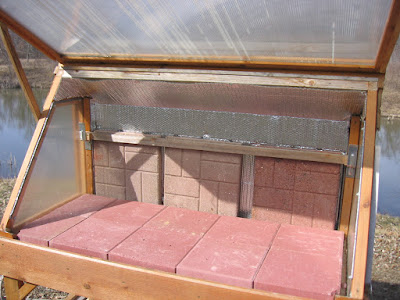 The next task was turning the most recent compost over into new modules.  About half of the compost was shoveled over into the stack of modules on the right.   The poop from two rabbits mixed with some pine shavings can make a lot of compost.  I'll use the not quite finished compost from the bin on the left to cover the field peas and oats, enough to protect them until they germinate.  I'm hoping the pile will get hot again with the warm weather, and some finished compost will be available in a month or two. 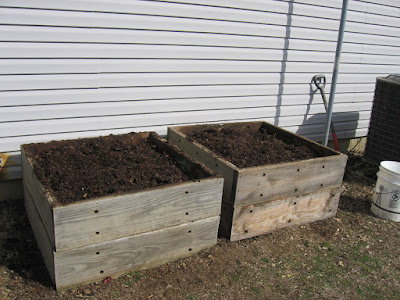 The final task - removing the plastic greenhouse that covered the overwintered spinach.  It's certainly warm enough to remove the protection, and the spinach will grow better in unfiltered sunlight.  The greenhouse not only protected the spinach, it sheltered lots of weeds too.  I believe that's ground ivy, and it's flowering. 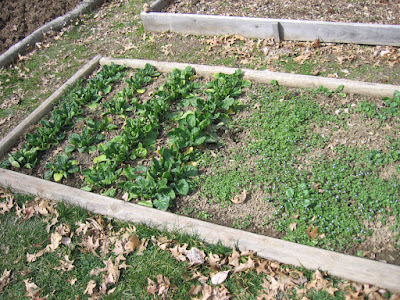 It's a good start.  Tomorrow I'll seed the cover crop, and pick up countertops for the kitchen.
Posted by gardenvariety-hoosier at 5:25 PM 1 comment:

Still haven't posted much this year.  It's not that I'm not starting a garden this year, but the kitchen remodel just sucks up my time.  About two weeks ago the seed rack was assembled in the sunroom and the storage onions - Ruby Ring - were seeded.  The seeds are 3 years old but still viable.  Keeping seeds in the refrigerator makes a difference. 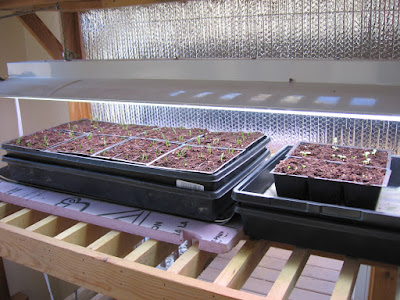 I also seeded 12 cells of lettuce.  I'm backing off the number of onions this year, seeding one tray of 72 cells.  There's still quite a few onions left from last year and many of them are sprouting.  A few days ago I seeded some cole crops - broccoli, cabbage, cauliflower, kohlrabi.  The first set of cole crops is always hit or miss, it just depends on how late the winter is.

The sunroom has been made into the workshop for the kitchen remodel. 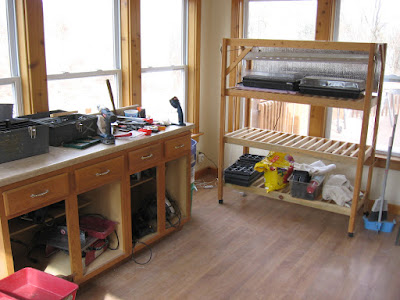 And the kitchen is officially down, as in no sink or functioning dishwasher.  I'm getting used to washing dishes in the bathtub, and try to keep the use of dishes to a minimum.  At least the future dining area has a floor and a table. 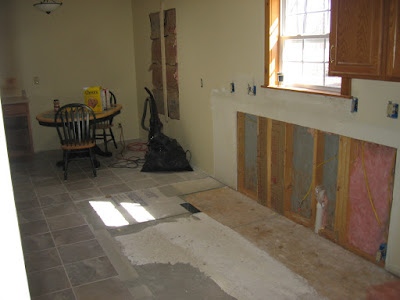 The overwintered spinach has been growing slowly through the winter.  I've thinned it several time and have harvested about a pound so far.  It's very good.   The weather is supposed to warm in a few days and I'll remove the plastic greenhouse cover when it does.  Looks like a good spinach harvest this spring. 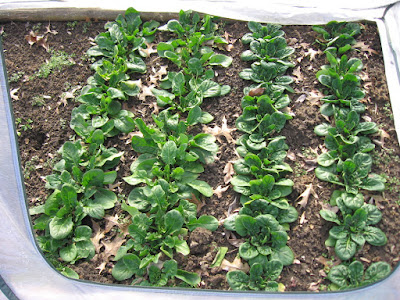