The Seeds are Here


The seeds arrived about a week ago.  This year I bought from three suppliers.  Most of the seeds I buy come from Pinetree, which fits well with my low-budget approach to raising vegetables.  They sell small packets of seeds, many for between one and two dollars, which last one or two years.  This year I ordered tomatoes and peppers from Totally Tomatoes, a Wisconsin seed company that has as you would expect a large selection of tomato varieties.  Cover crops, which were covered in the last post, came from Peaceful Valley Farm Supply, a California company.   Since shipping costs add up I try to keep the number of seed orders to a minimum.   I would have liked to order some Javelin parsnips but that would have meant ordering from another seed company and paying another freight bill, so I will make do with the old standby Harris Model parsnips which can be purchased at a local seed rack.

This year I did not need many vegetable seeds.  I don’t experiment a lot with new varieties because there isn’t the space.  I’ve found cultivars that work well for me and mostly tend to stay with them.  Many vegetable seeds last several years, and I’ll use them up if I like the variety, if not they are tossed.


Last year I bought a packet of 1000 Ruby Ring onions from Johnny’s, and stored the seeds left over in the refrigerator.  I tested them for viability a few weeks ago and all ten seeds sprouted.  Johnny’s sells a packet of 250 seeds of this onion for $3.95 and 1000 seeds for $4.95.  At two seeds per cell and 144 cells, the small packet was not quite enough for a season's planting, as I found out two years ago.  Since I really like this onion last year I bought the large packet of 1000 seeds, which I hoped would remain viable for the second year.  A lot of companies price their packets like this, with a much larger packet offered for only a little more money.

This is what I bought from Pinetree:


Marengo Romano pole bean, a yellow bean.  The Fortex beans that I grew last year were a fantastic bean, and there are plenty of seeds left over, so this is an impulse buy.  Guess I will plant both varieties.

Bride eggplant, a white eggplant.  I still have a few Lavender Touch eggplant seeds, a very good eggplant that Pinetree discontinued.  I’ll probably plant one of each variety.

Gigante Di Inverno spinach.  This is supposed to be a long-maturing very cold tolerant spinach with large leaves.  I’ll seed this in the fall for overwintered spinach, along with another variety to hedge my bets.

Green Magic broccoli.  This is a new one for me, early maturing.  My favorite early broccoli has been Major, a nice blue-green broccoli with uniform heads that Pinetree no longer sells.   Last year I tried Belstar as a replacement and the results were underwhelming.  My biggest complaint is the sprouts in the head matured at different times.  This year broccoli is a venture into the great unknown.  I’ll hope for the best.

Aspabroc broccoli.  Another first this year, it’s actually a hybrid of broccoli and Kai Lan Chinese broccoli.  From the catalogue hype the whole plant is edible with an asparagus like flavor.  It’s supposed to be ready to eat in 50 days.
Kolibri kohlrabi and Grand Duke kohlrabi.  I’ve grown both of these and both are excellent, much better and faster maturing than the old standby Early White Vienna common in the seed racks.   I ordered both just in case one was out of stock.  I’ll grow them side by side and compare.

Radiccio/Chicory mix.  Because sometimes lettuce gets a little boring

From Totally Tomatoes - all of these varieties are new for me:


Big Beef F1.  I’ve heard this is the most common tomato around here, essentially bulletproof with very good flavor.  I’ve never grown it but expect it to provide good yields no matter what kind of summer is in store.   No pushing the envelope with this variety.

Super Marzano F1.  This is the tomato for sauces and salsa, a Marzano with disease resistance.  I’ll grow two cages with two plants per cage, enough to make some salsa and maybe some canned tomatoes or sauce.  I’m hoping this variety will do better than the Pompeii sauce tomatoes grown last year.  Those plants were overcome with blight by the end of August, although they still produced enough for 18 pints of salsa.

Granny Smith F1.  This is a green/yellow tomato, firm and tart, supposed to be good for grilling or frying.  It may also make a decent ‘green’ salsa, sort of a pseudo Salsa Verde.  I’ve read some reviews and people either love it or hate it.  It also is supposed to store very well.  This is my ‘wild blue yonder’ variety. Here's a link to Granny Smith tomatoes.

Grandma’s Pick F1.  Not sure why I bought this because there isn’t the space for it.  It’s supposed to have heirloom flavor and looks but modern disaease resistance.  It’s very attractive with deep creases running from the stem.  Here's a link to Grandma's Pick tomato.

Mosquitero Poblano pepper.  It’s a new, and likely improved, Ancho pepper.  I like Anchos, a lot.  It seems worth a try.

From last year there are squash, cucumber, okra, beans, cabbage, Brussels sprouts, cauliflower, carrots and beet seeds.  I’m a little concerned about the viability of the beet seeds but new seeds can be obtained from the seed racks in the stores.  Most of these seeds store for years.


Then there are the cover crops – Berseem clover, Austrian Winter Peas, White Oats, Buckwheat, and enough inoculum to treat fifty pounds of peas.  There should be some left to inoculate the snap beans.   The clover is pre-inoculated, the bacteria for clover being different than for peas. 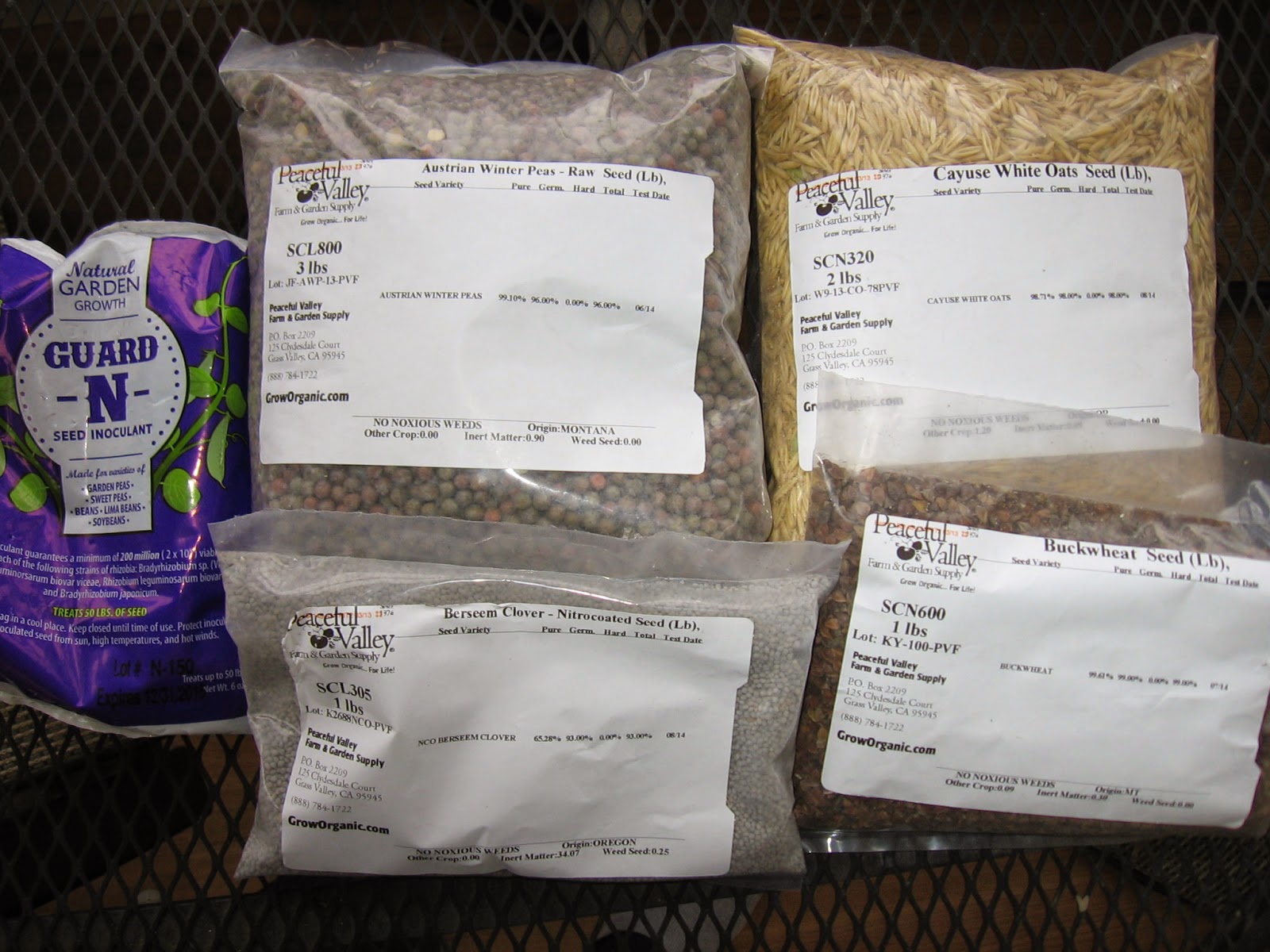 Now if winter will hurry up and end.

Posted by gardenvariety-hoosier at 5:35 PM 2 comments: