Update on the new lights


Recently I published a post on growing seedlings under fluorescent lights, http://gardenvariety-hoosier.blogspot.com/2013/02/lights-action.html.   My intent was to share the information I had found and show the new lighting setup I put together in the hopes that people would find this information useful.  The old  setup consisted of a shoplight with two 5000K fluorescent T8 bulbs (32 W).  I was never satisfied with the setup since it did not provide strong enough light to grow robust plants. It seemed that every year the seedlings were more spindly and grew slower as the lights aged.


This spring I modified the fixture to hold four bulbs.  The old 5000K bulbs were removed and replaced with two GroLux bulbs and two 8000K bulbs, both Sylvania brand.  (I originally intended to get 6500K bulbs but happened to find the 8000K bulbs when I was at a farm supply store.  The light output of either bulb is practically identical by their spectral charts, both bulbs making a lot of blue light).  In addition to doubling the light output I believed that the new system would provide more light in the wavelengths that plants use for photosynthesis, resulting in faster growth and stockier seedlings.


Comparing the old and new lighting systems can’t provide a lot of definitive information, because I changed several variables – from two bulbs to four,  with a different color temperature.  With the additional lights I also reduced the daily light cycle from 15-16 hours to 12.5 hours.   The objective was to create a light system based on the best information that I could find that grew healthier seedlings.  It should be noted that any time you do research on lighting systems for plants you will inevitable link to a lot of websites devoted to cannabis growing.  Those people really seem to know their stuff!


So how did it work?  The worst performing plant under the old lights was always lettuce.  It would quickly go spindly and fall over.  By the time the seedlings were large enough to go out into the beds it was a real question whether they were healthy enough to survive.  This tray of lettuce germinated on March 6.  They are ready to go outside except the weather won’t cooperate and we are supposed to get 6 inches of snow tonight.  This lettuce is not at all spindly, it's short and leafy, a great improvement. 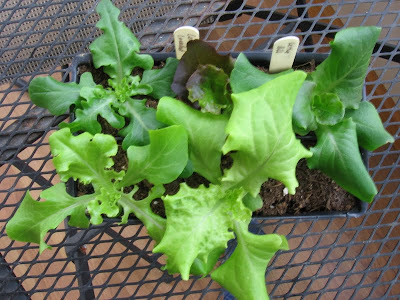 I start a new set of brassica seedlings every twelve days.  This set was sown on March 1 and germinated on March 3 and 4.  The picture below was taken on March 21.  They were definitely ready to go outside at this time if the weather would allow.  (The temperature when I got up that morning was 16 degrees).   There’s two kohlrabi plants at the bottom of the picture that were seeded about a week after the rest of the plants in the picture.  It seems that I forgot to seed them when I sowed the other plants, although I did label them.  Must be pre-Alzheimer's. 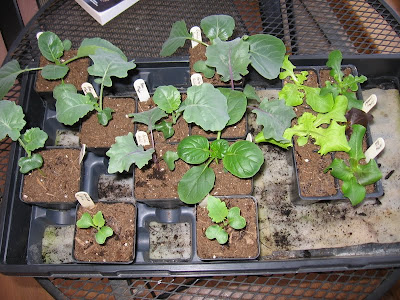 This is the same set of brassicas three days later.  They’ve been moved around a little to give those green solar panels their own space.  I can see that they’ve grown quite a bit in three days, especially the two Gonzalez cabbage plants in the back which look like they’re on steroids.  I’m hoping the seedlings can go out into the cold frame by midweek. 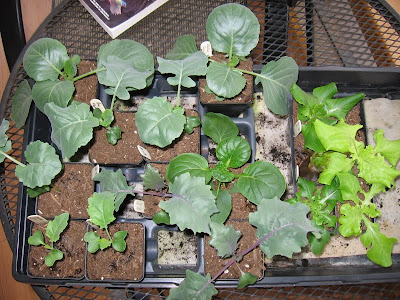 I’m very happy with the results.  The four light fixture uses more electricity than the old fixture but it’s also on fewer hours a day, 12.5 versus 16 for the old fixture.  If there’s more than two trays the trays can be set under the lights crossways and the light raised up.  Even when the light is raised up there’s enough light to grow the seedlings.  This would have been impossible with the old setup.


If there’s one recommendation I can make for anyone who needs to replace their fluorescent bulbs but wants a conventional bulb that you can find at a big box store it’s this:  get the highest color temperature bulb that they have.  A 6500K bulb will produce more of it’s light at wavelengths that the plants can use than a 4000K bulb.  That’s not to say that plants won’t grow under a lower K bulb, they will, but they should grow better under a higher K bulb.  (And I know that somebody will write me and say that they’ve used a low K bulb for years and it’s worked fine).  Take it all with a grain of salt.  I’m convinced that the higher K bulbs are more effective.