Setting up for seed starting

I start seeds in the sunroom, which is a multipurpose room.  In the winter it is used to store firewood, and the door is kept shut.  There is no point in heating a space that isn't lived in.  This time of year the sunroom is transitioned from wood storage to seed starting.  When the weather warms, which is beginning to seem like the impossible dream, I'll use the sunroom as a living space, a place to relax.

Last week this rack of wood was nearly empty. This is where the seedling rack goes. 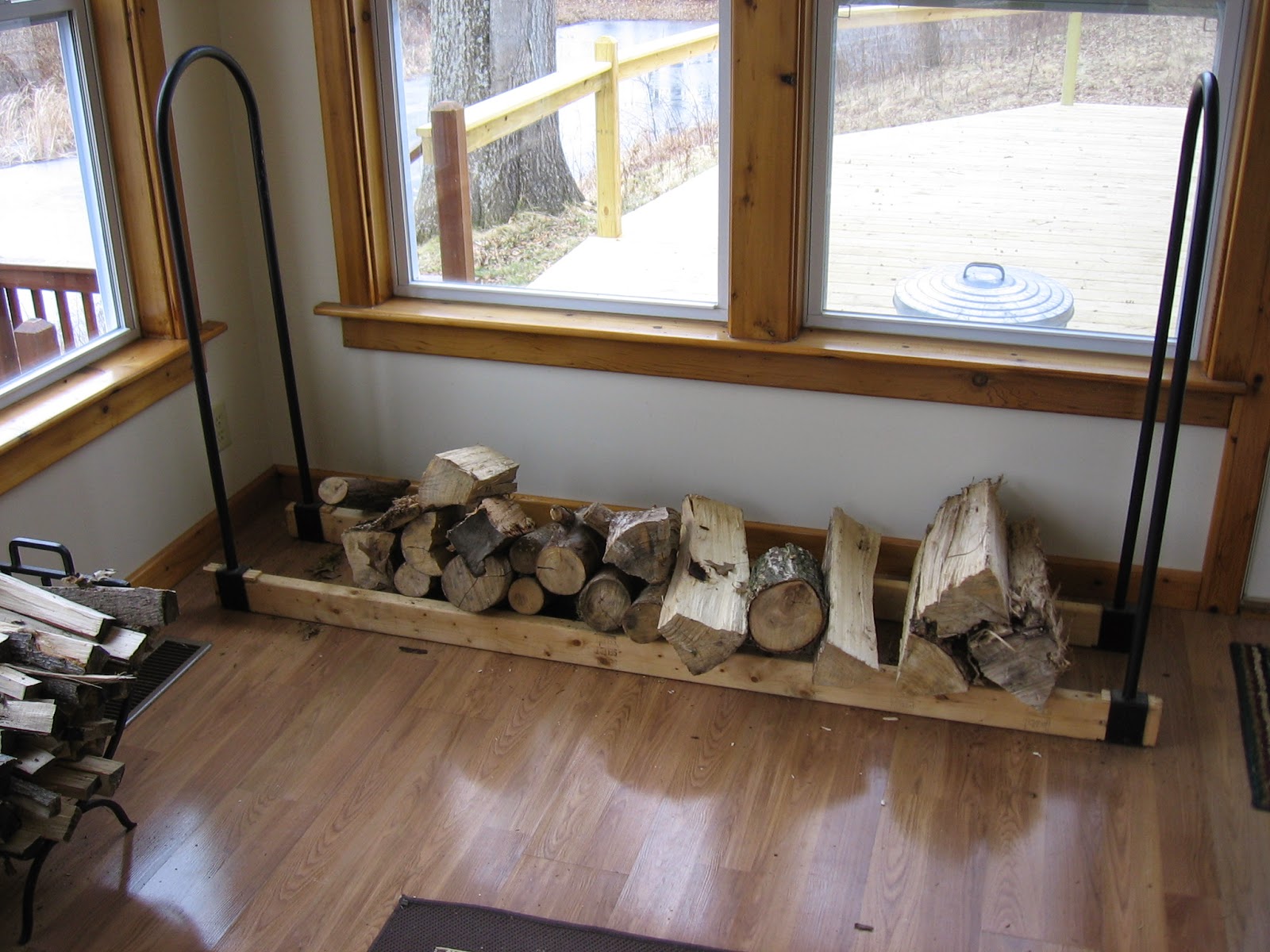 The other rack still had a lot of firewood a week ago.  Like much of the eastern half of the country we've been stuck in an arctic mass of air and the wood in this rack will be gone by the weekend.  Well thank goodness the heavy snows have fallen either to the north or south of me so at least there is little snow to contend with.  I really don't know how people in New England can cope with this weather.

When this rack is empty I'll remove it and replace it with a foldup table for potting.  Then I'll be resigned to hauling in wood from the outdoors with a little wheeled cart.  At that point I'm hoping that the worst of winter will be over. 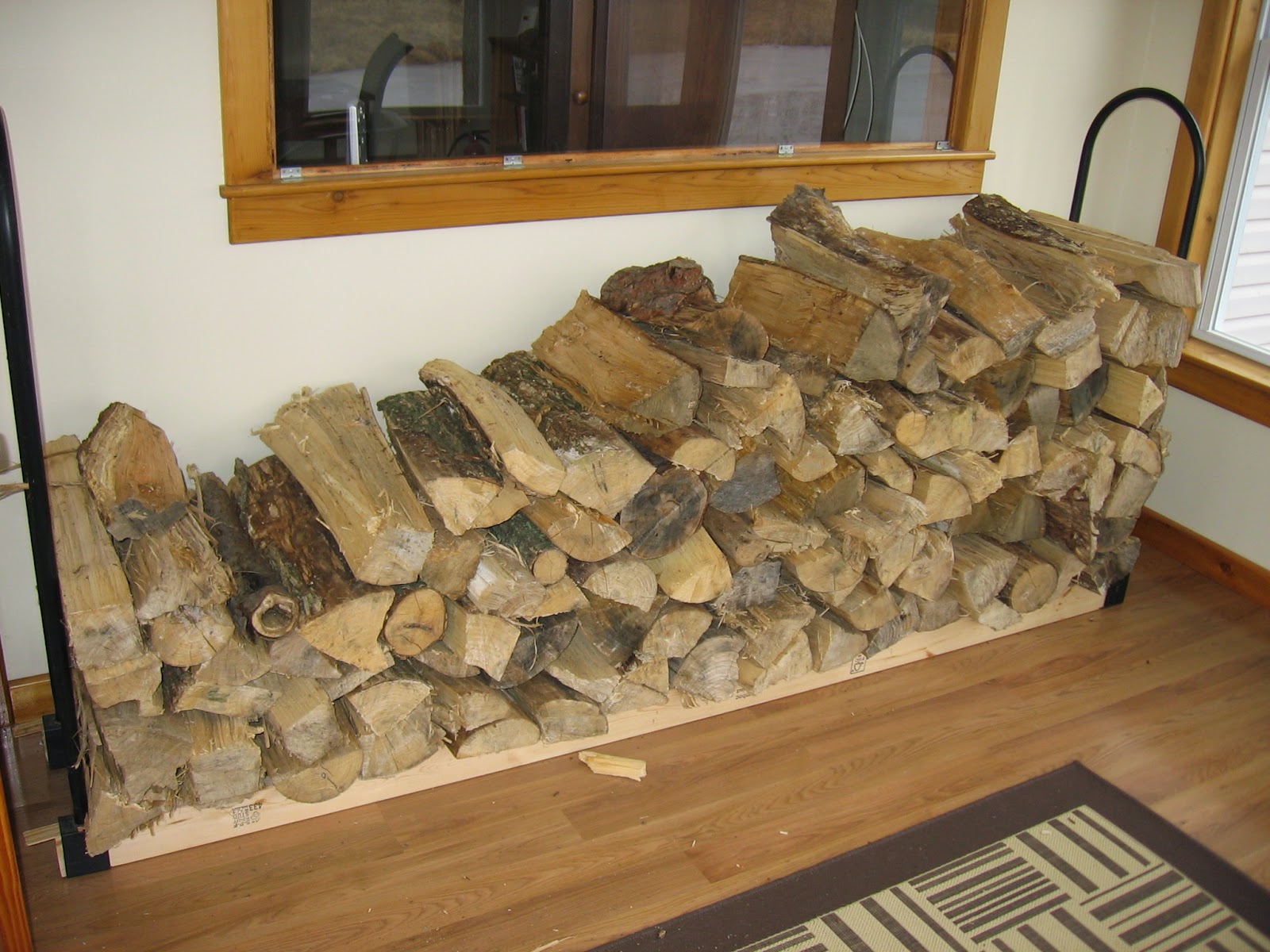 The seedling rack, built last year, was extricated from storage and re-assembled.  So far I've gotten by with just one 4-bulb shop light.  In Spring the trays of onions can go into the cold frame which frees up space under the lights for the warm weather plants. 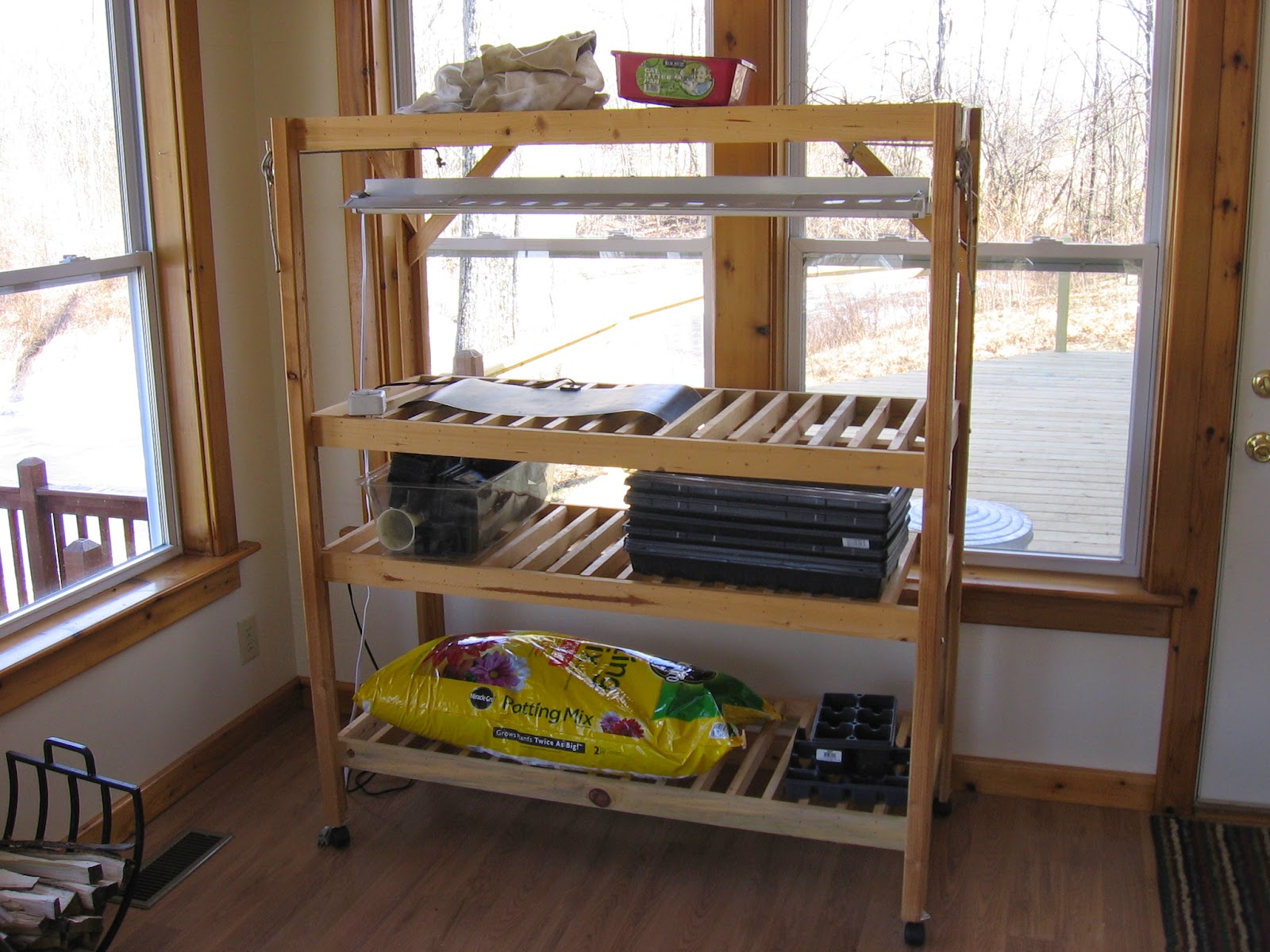 The rack works well but it should have been taller by about 8 inches, in case I need to hang a second light on a lower shelf.  As it is the lower of the two middle shelves, both of which can be moved, would likely have to be dropped to just over the bottom shelf, making that shelf useless.  I placed the shelf for growing so there is a lot of space between it and the light, enough for the tallest tomatoes.  It's much easier to adjust the light than remove trays of seedlings and move the shelf.  The light is held up by rope threaded through eyelets - 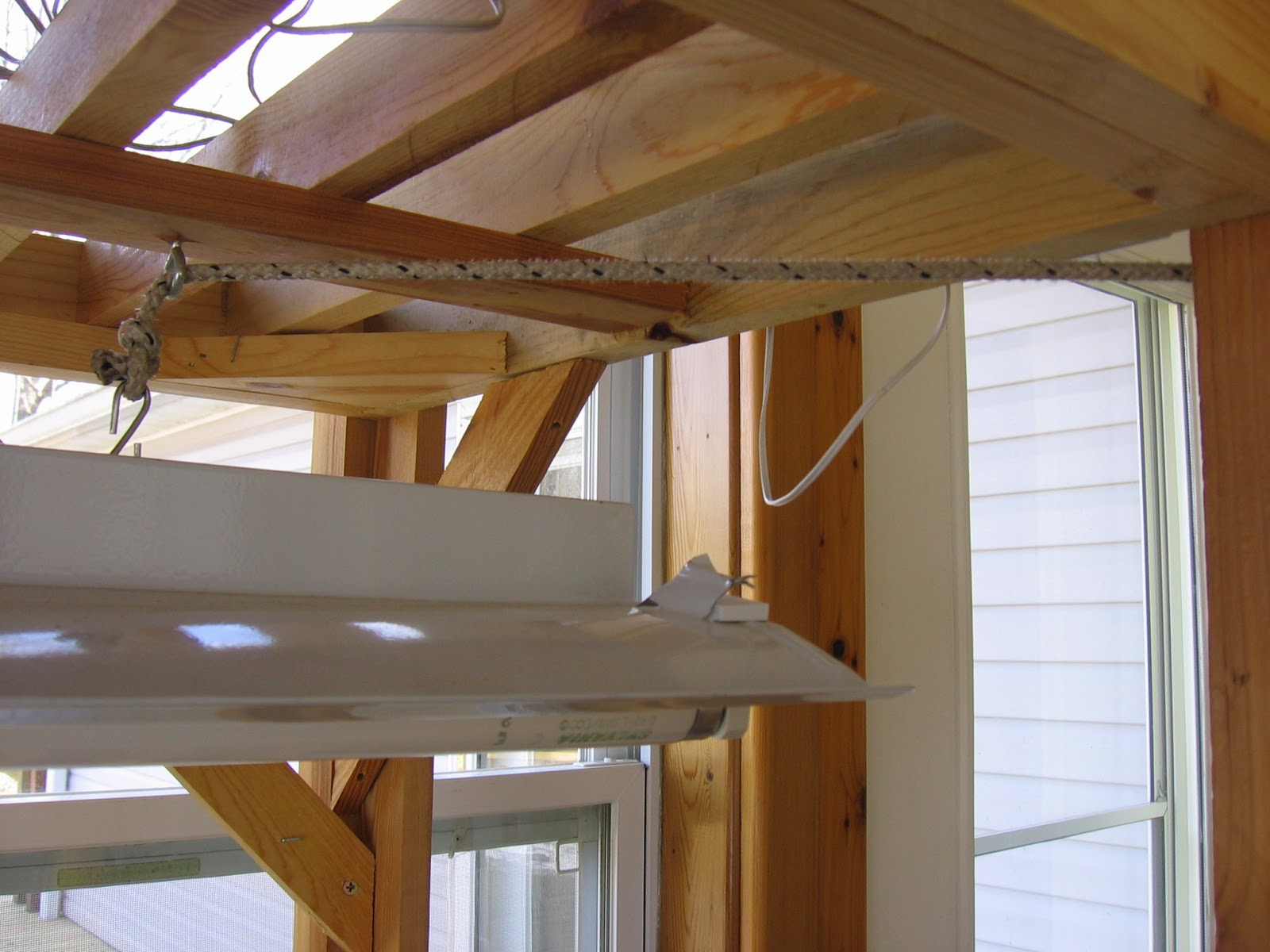 - and cleated outside.  There's also a cheap thermometer with a probe to check the temperature of the potting soil. 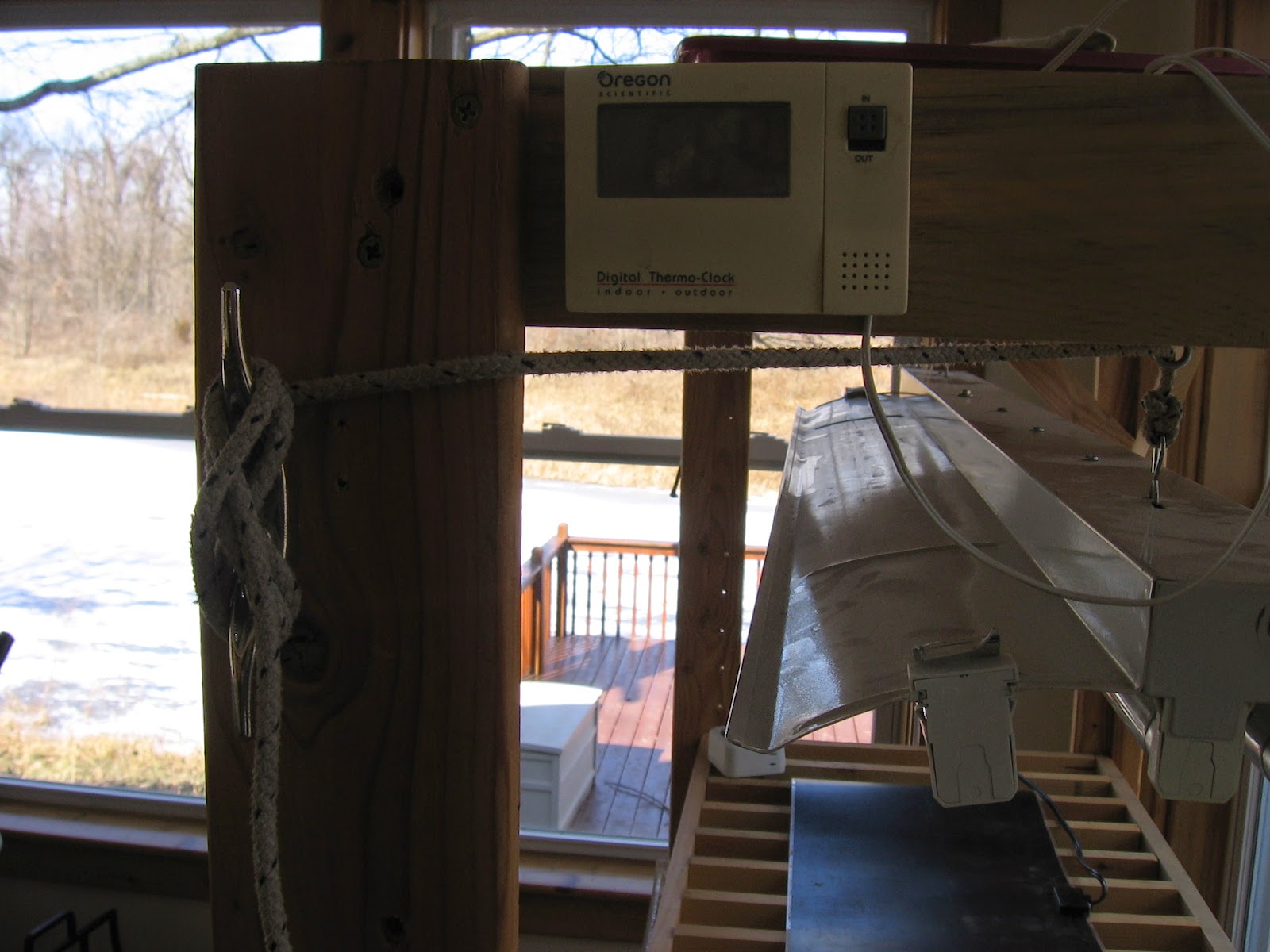 The shoplight has been converted from a two-bulb unit to one that has four T-8 bulbs.  I've had much better results since adding the additional bulbs.  Not only are the seedlings leafier but I can turn the trays crossways and raise up the light if needed, and the plants will still do well.  For those of you interested in lights for growing you might be interested in this post.

Additional paraphernalia:  a light timer, heat mat, and a cheap rheostat to modulate the output of the heat mat. 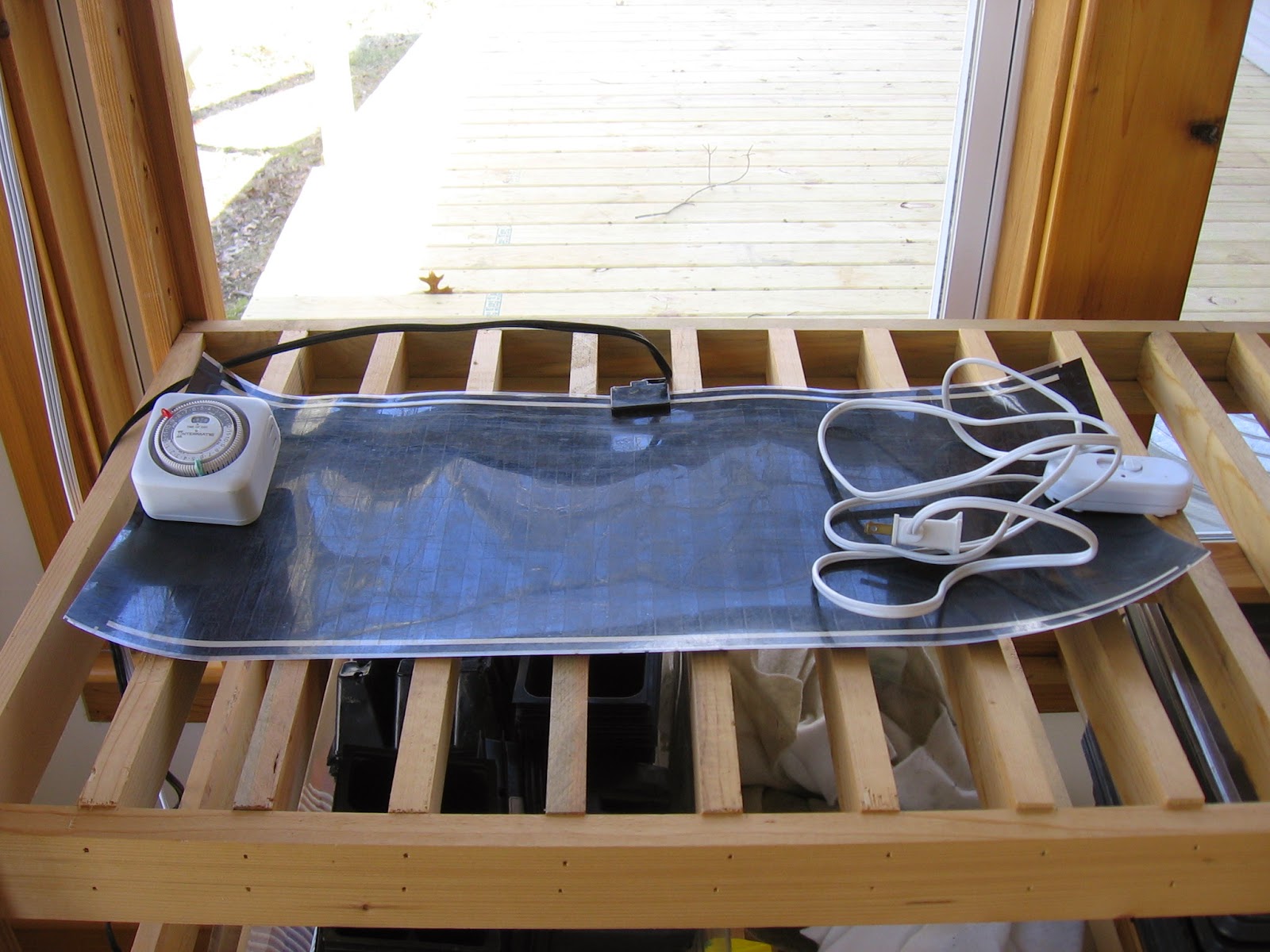 The plan calls for starting seeds this weekend.  Many gardeners start seeds a bit earlier, but my experience the last two winters has convinced me to wait a bit longer.  With this cold spell it looks like the ground will be frozen for several more weeks.
Posted by gardenvariety-hoosier at 5:07 PM 4 comments: