This morning three deer, a buck and two does, were browsing in the field across the pond.  They look like yearlings.  The pictures are a little foggy since I took the shots through a window – if I had stepped outside I’m sure they would have spooked and run off.  The property across the pond  was formerly a cow pasture that has been neglected for about 10 years (my best guess) and is undergoing succession, that is the progression from weeds, shrubs and grass to forest.  A number of trees have already established themselves – red oak, tulip poplar, black cherry, ash, hickory and sycamore.  There is a small grove of black walnut further back.  The field will probably look a bit like a park as the trees get some size, although the grass and weeds are head high. 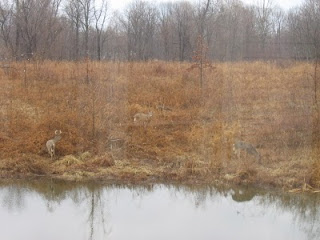 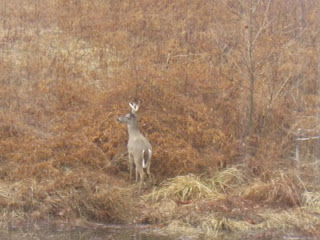 I don’t mow around the pond.  The first owners cut the grass up to the pond’s shore, all around the perimeter .  I tried mowing all around the pond once.  It took most of a day, and that was the last time for that.  Not only is all that mowing a waste of time but it eliminates wildlife cover at the pond's edge and slows the development of a well-rooted stand of vegetation in a graded soil that lacks organic matter.  Tall grass around the pond also discourages Canada geese, who don’t like walking through it since it might hide predators.  Maybe the best argument for not mowing around the pond is the lack of mosquitoes around the deck in the summertime.  The tall grass provides habitat for numerous dragonflies and the shoreline is thick with frogs.  After dusk the bats come out to feed.  The skeeters just don't have a chance. 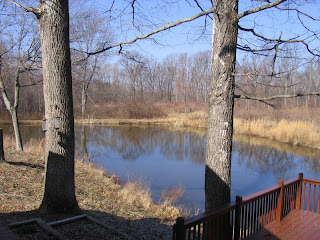 Twice a year I cut down any tree saplings that have started within about 30 feet of the deck, and scythe the taller weeds.  Clusters of cattails are expanding around the shore and I’m hoping that they will establish around most of the pond.  Cattails harbor marsh wrens and redwing blackbirds, block erosion, clean the water, and they look great.  They aren’t likely to take over a large area since the shore slopes steeply enough to limit them to a narrow band.
Posted by gardenvariety-hoosier at 8:50 PM

Email ThisBlogThis!Share to TwitterShare to FacebookShare to Pinterest
Labels: Wildlife