“I’m fixing a hole where the rain gets in. And stop my mind from wandering. . where it will go.”

Poor yields this week.  The weather went from 90’s to 60’s in the span of a day.  Cool and almost no sun for a week and the plants just stopped producing.  We need rain badly but got only a little.  Just lots of clouds.

Sunday was the first nice day for relaxing on the deck in some time, probably a week but it seems a lot longer.  I was going over some notes for a lab I’m teaching at the  Indiana-Purdue campus in Indianapolis, enjoying the quiet and gentle breeze – a perfect September day.   Suddenly there was a loud splash at the pond’s edge, much more commotion than any fish can make.  I looked up over the railing and just below the deck saw a large bird of prey unlike any I had seen before around here.  It was a bit larger than a red-tailed hawk, definitely not a Cooper’s hawk which is much smaller.


The raptor had landed in shallows with its wings spread.  Then it took flight and I could hear the beat of its wings as they lifted it from the water, but no fish was in its talons.  It circled up around the trees, then briefly out of sight, then flew back over the pond.  It started another dive toward the water from treetop height then aborted about half way into the dive, then flew away.  Wow!  Could it be an osprey?  I checked the bird book.  The face markings matched, with a dark streak on the side of the head.  What other raptor dives into water to catch fish?  The map showed that ospreys have a patchwork range in this part of the state.  I really wanted to get a picture of this bird because I may never see another one around here.
There’s  a lot of open spaces in the beds now.  I took out the German Queen tomato plant since it stopped producing.  I seeded some carrots in August and none of them germinated.  Who knew, the seed was only three years old?  And I never got any fall brassicas seeded into pots until late August, probably too late.  There’s one chinese cabbage that was direct seeded that is doing well.   My excuse - the house is torn up from the ongoing remodeling –and I’m sticking to it.   Well I did get the spinach and lettuce planted and it’s already germinating.  Got to keep after it with the watering until we get some rain.

This is the last patch of bush beans for the year.  I think they are Dragon Langerie, a very vigorous wax bean.  The patch of Roma beans should be good for another week.  The bean beetles have not been real bad this year.  They were just starting to ruin the patch of Provider green beans when I pulled them up.  The beetles eat a few spots out of the bean and ruin it.   Maybe my strategy of planting patches of beans in different beds has thwarted the beetles enough to hold them at bay, or maybe there just aren’t many beetles this year. 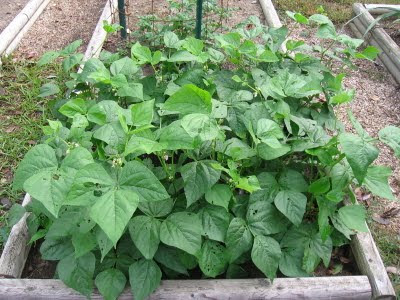 The osprey got me thinking about eating fish, so I baited a hook with a chicken gizzard and heaved it into the water.  It took awhile, not that I mind, but a really nice channel cat took the bait.  This is the biggest fish I’ve caught all year – 21 inches head to tail – and it really put up a fight.  It made a pound of filets and the meaty backbone, which was frozen for fish stock, weighed 7 oz.  Breaded and fried it can’t be beat.  I want to harvest more before the weather turns.  They will replenish in the spring. 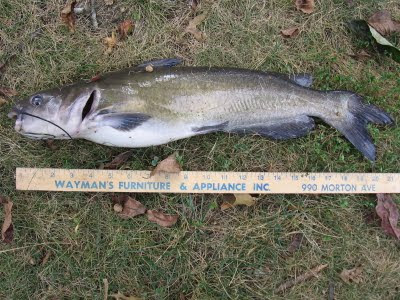