Yes I haven’t posted in awhile.  But then this is ostensibly a garden blog and there’s not much gardening to be done this time of year.  Still there’s planning and seed buying and all that and I’ll get to some of that shortly.  It has been a bear of a winter in these parts.  In early January Mother Nature gave the gift of a foot of snow in one night, followed by two days of temperatures never above 0 degrees F.  It was 4 days trapped in the house before the driveway was plowed.  Influenza gave me a big hello on Christmas Day.  The really intense sickness, when there doesn’t seem much difference between death and the present state of affairs, lasted only two days, but since then I’ve had a nasty hacking uncontrollable cough that is only slowly getting better.  To pass the time I’ve been reading some books about the First World War, hoping to shed some light on mankind’s propensity for self-destruction.

I draw up a new plan every year.  I’ve read that you shouldn’t plant the same things in the same place every year, else invite disease.  It certainly makes sense.  I keep the plans from prior years and try to move things around so the intervals between planting a family of plants in a bed are maximized, usually 3 years.  The beds are drawn to scale but not in proper position so all of them could be fitted on one sheet of paper.  The smallest bed is 4 feet by 8 feet. 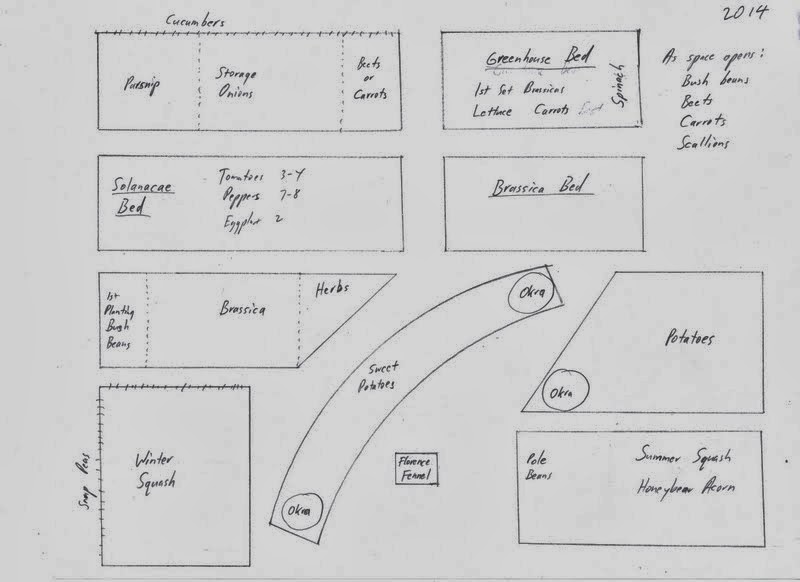 This year there is a new bed (lower left in plan) where the old tree stump was dug out after the roots had mostly decomposed.  It is an open bed, not a raised bed.  Last autumn I turned over the sod, added a few inches of shredded leaf mold and chicky-doo-doo fertilizer and covered it with landscape fabric.  I’m hoping the worms will do their work and turn the leaf mold into the soil.  It will be planted with winter squash so it doesn’t have to be great soil this year.

This is what the beds look like from the sunroom.  The bed on the right with the black covering was not included in the diagram.  That is the raspberry/rhubarb bed which was built last fall, which I’ll plant this spring.  It got the same blanket of leaf mold/fertilizer/landscape fabric as the other new bed.   Hope it keeps the earthworms warm.

I have no idea why, but Picassa added falling snowflakes gratis.  Well, never look a gift horse in the mouth!

The following morning the beds looked like this.  Since the first heavy snow was nearly gone what we needed was a fresh layer to prolong the misery.  At least fatalism has not yet given way to despair.  Maybe it's because complaining in public cheers me up. 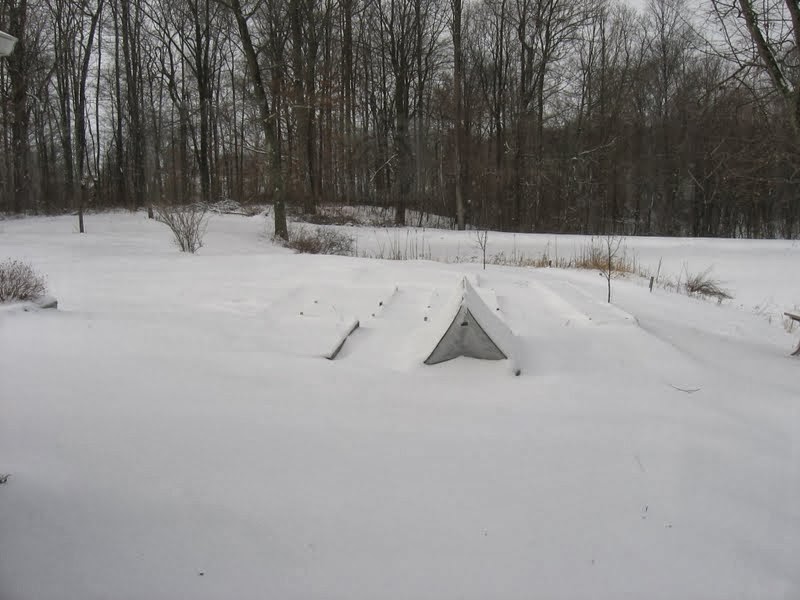 Normally I would be starting seeds about now, but what’s the point?  The soil temperature will warm to suitable temperatures at least two weeks later than normal, so I might as well postpone any seed starting for at least another week.  Time to assemble the seedling rack. 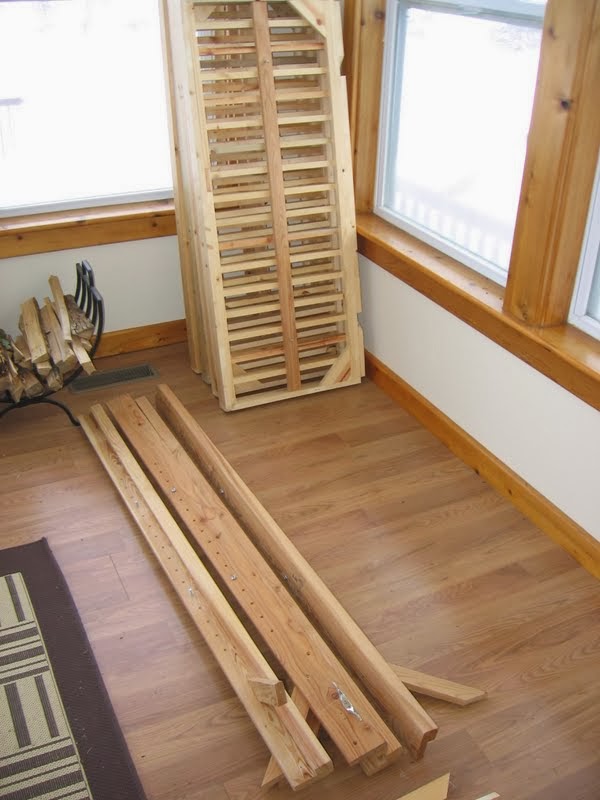 Posted by gardenvariety-hoosier at 5:01 PM

Sorry you were sick over the holidays. That is never fun. I hear you on the snow and cold winter we had this year. I can't wait for spring. I just got my seed starting area organized and sowed some onion and leeks this weekend. I hope that tending to a few seedlings will help my winter doldrums.