Well it had to happen sooner or later, and this year it was definitely later.  I'm talking about the first hard freeze of course.  There was a light frost midweek that wilted some of the sweet potatoes and squash leaves at ground level but did not touch the peppers .   Friday called for a hard freeze that night and it was time to get the remaining peppers inside. 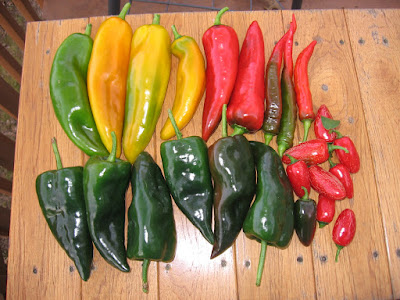 From the top left are Mama Mia Giallo, an orange sweet pepper that I really like, Carmen and a few Jimmy Nardello peppers.  On the bottom are Mosquitero ancho peppers.  Jalapenos are on the right.  I plan to roast all but the jalapenos on the grill tonight.  I was hoping that the anchos would ripen but they never did.  They are not green either, there is a chocolate tone mixing in, so I'm hoping they will be good.  I'm not a fan of green peppers and much prefer fully ripe peppers.

The sweet potatoes were dug up.  There's no picture because there is nothing to show, just a few pounds of small roots and pieces of larger ones - food for the rabbits.  The voles got most of them.  I even managed to turn over one of the rodents while digging them up, and went after it with the shovel but it got away.   Next year, no potatoes or sweet potatoes in this bed.  I plan to grow some potatoes in containers.  No point in providing a buffet for the rodents.

The remaining squash were brought inside.  A few Tekskabotu were still on the vine and were also brought inside.  It was by far the best winter squash year ever.  I harvested 80.4 pounds of butternut squash from 4 plants, 42.0 pounds of Tekskabotu squash from 1 plant, and 12. 1 pounds of Golden Nugget squash from 1 plant, for a total of 135.4 pounds of winter squash. That does not include 11 pounds of Teksukabotu squash that may or may not be ripe enough for consumption.  All from a bit over 100 square feet of planting space.  To be fair, the plot was surrounded by trellises and the squash were trained over the potato patch once the potatoes were out, but still, it's an impressive harvest.

Once everything was out the garden was cleaned up.  The remaining structure was removed and the pepper plants cut down.  The 9 foot tall okra plant was sawed down.  To see what other people are harvesting, head on over to http://www.ourhappyacres.com/

Posted by gardenvariety-hoosier at 11:33 AM

Your winter squash harvest really is impressive! I got barely over 100 pounds this year and devoted quite a bit more space to them, at least double your area. I'll have to add Tetsukabuto to my grow list next year, it sounds like an interesting squash. I see you also got a lot of the Metro butternut. I grew Butterscotch and I think I only got two from it. Like you I have trouble getting the anchos to ripen, but I dried them and they make tasty chile powder.

I know how you feel about feeding the rodents, they have been having quite a feast here this year. That's an incredible harvest of winter squash!

Oh my, you just reminded me of something very important - not to plant any root veggies in the shed side garden because of the voles!! And I honestly had considered that for next season. Whew. A shame about yours.

Your post sums up veg-gardening very nicely - you win some, but you also lose some! Good job voles don't eat squash, eh?

Congrats on the more than impressive squash harvest. I've tried Gold Nugget a few times and was lucky to get one puny 1 lb. squash from each plant so I am appropriately envious!

Ugh voles - what a nuisance! But I must say, I did chuckle at the thought of you chasing one, shovel in the air :)