There are still harvests to be had from the beds.  There are enough ancho and other peppers to make another batch of harissa. I meant to pick them yesterday before today's rains set in but couldn't get to it.  The forecast calls for the first fall freeze on Saturday morning, and I'll get them in sometime this week.   There's also a 4' x 4' patch of parsnip, and I'll start digging them up after a few hard freezes.

I was pulling up the bush beans to clean up the bed for planting spinach and garlic, another 'to-do' project that needs to be done.  There was a row of carrots that I had been ignoring, assuming that they would not amount to anything since they were seeded in the summer and never looked very healthy.  Well, they actually were pretty nice carrots, over a pound at that.  I don't remember what variety these are. 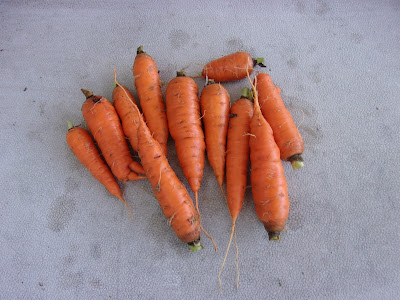 The winter squash have been curing on the screen, and it was time to get them in before today's rains.  There's 16.6 pounds of Metro Butternut and 23.6 pounds of Buttercup squash.  It was a poor year for squash, and compared to last year's yield of 140 pounds, it's not much.   The plants kept dying a few weeks after germinating, and I kept seeding new plants until some survived.  The late plantings probably helped the Buttercups escape the borer, which is especially susceptible. 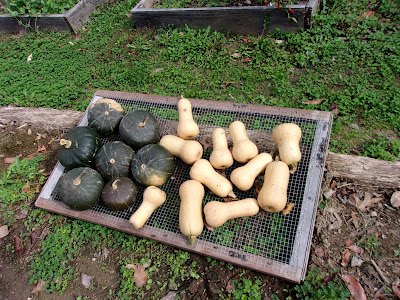 To see what other gardeners are getting, head on over to Our Happy Acres.
Posted by gardenvariety-hoosier at 1:12 PM

Carrots can fool you! Like you I've been surprised by big ones with poor foliage. Your total of squash beats mine, which turned out to be exactly 0. The plants never got going this year for some reason.

If you think that 40 lbs of winter squash is not that much, you would be practically crying at my dismal harvest - I don't think I even made the 5 lb. mark. I suppose the good news is that next years harvest can't get much worse - well maybe it can so I should probably be grateful that I actually had some winter squash to harvest!

I've not grown any carrots for several years now, since they are not one of my better crops. Any time I ignored them they were overrun by weeds! We're forecast for a frost on Saturday and a freeze on Sunday, so I'll be plucking whatever I can from my summer veggies and getting things winterized this week. It's almost time to plant my garlic too.

Your carrots were a nice surprise then, just like some of ours this week that the voles had cut off most of the leaves from. Just love it when these wonders appear!