Too cold to plant and the LED lights updated

It's April 10 but the weather has been more like February.  There's 10 cole crop seedlings under the lights that could have gone into the ground a week ago, but with some nights reaching into the low 20 degree F I've chosen to leave them inside until the weather improves.  That will be tomorrow when the temperatures go to something like average and stay there for awhile.

I bought another LED light and added it to the two in place.  That required removing the frame and reconfiguring it a bit.  Now the lights are almost touching and the plants will not be in any 'dead zones' with inadequate light.  As a unit, the three lights together are about 13" by 40" in dimension, about the same size as two plant trays end to end.  With the increased light, my point and shoot camera just couldn't seem to find a proper adjustment for the picture. 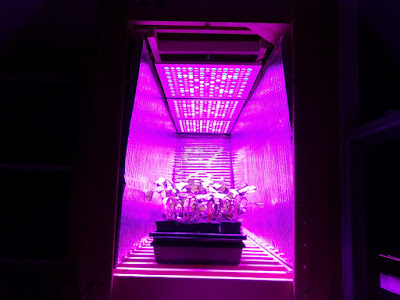 In a recent post I expressed some concerns about the lights burning lettuce, which I attributed to the two UV lights in each unit.  With raising the lights over 20" above the plants, and turning the lights so the UV lights were not in line down the center, that doesn't seem to be a problem anymore.  In fact, since adding the third light, the plants appear to be doing better than they did under the fluorescent lights.

This is the set of cole crops which I hope to set out tomorrow, and tomato seedlings that have just recently germinated.  For a while the cole crops were leggy, usually an indication of inadequate light, but with more leaf area as they grow they appear to have thickened their stems and are much stouter now. 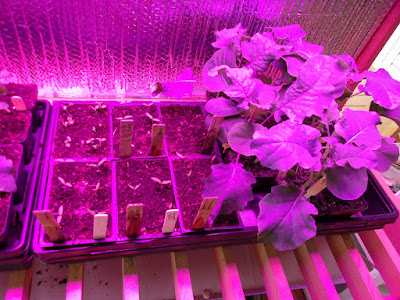 The other tray has pepper seedlings, two more sets of cole crops at different stages of growth, and some lettuce.  All of it looks healthy at this point. 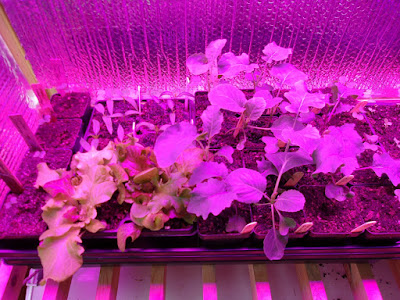 So far I'm happy with the results under the LED's.  We'll see what happens when the tomatoes and peppers get tall.  With three lights my investment is about $90.  A new good quality shop light with 4 T8 bulbs would probably set me back about $60 to $80.  So the initial investment is more for the LED's, but the 6500K T8 bulbs have to be replaced every two years, and the GroLux bulbs last about a year before losing their effectiveness.  With an operating life of 40,000 hours, the LED's should be cheaper in the long run.

Usually by this time of year I am harvesting spinach and lettuce.  With some warm sunny days that should start happening soon.  I hope to set out the onion seedlings in about a week. 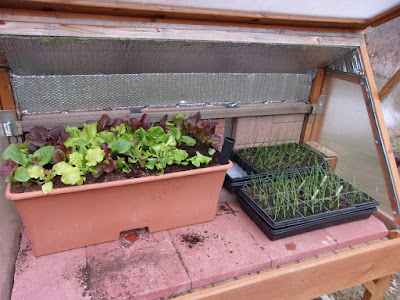 Posted by gardenvariety-hoosier at 11:09 AM

Those seedlings look wonderful! I'm glad that you were able to tweak your setup to achieve such good results.

Lucky you, that your weather is finally turning. My onions and brassicas should be transplanted this week but, like you, our temperatures are not cooperating. From the looks of it, our warmup will not be happening for another week or so - it's getting crowded under the lights!