The chickens look like they are being chickens in their new home, arguing, sleeping, eating and pooping.  So far they have plenty of space.  One thing I would change if I was building it again is the height of the tractor.  The book about chicken tractors suggested building it three feet high.  That’s way more than is necessary – two feet high is enough – and a lower tractor will weigh less, always important when you have to move it once a day.  But it seems to work just fine.
After the pen was built and moved into place the chicks were put in their new home.  About ten minutes after moving time I spied a snake about 20 feet away laying in a sunny spot.  As kids we called these black racers, very thin and fast non-venomous snakes.  This one was between three and four feet long, and pointing in the direction of the new pen.  Hmmm I thought.  So I got some pictures. 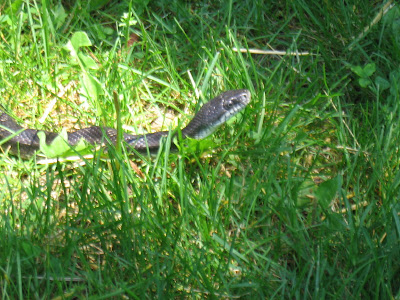 Now normally these snakes are welcome.  Since I began seeing them last year the moles have become much less of a problem.  In fact this spring there have been no subsurface tunnels in the yard, although the moles are putting up popholes around the yard.   I realized that a snake-chicken encounter was not in anyone’s best interests.  The chickens were already stressed by their change in abode and not yet adapted to the outdoors. The snake might be able to kill a chick, but there is no way it could swallow one, and if it tried it wouldn’t be able to get out of the pen and would probably get pecked to death by the chickens. 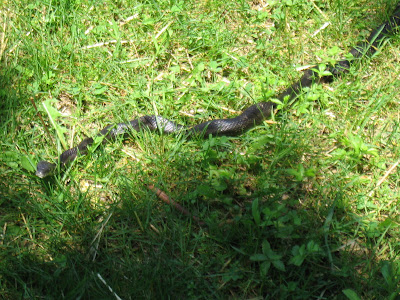 I guessed that the snake, being cold-blooded, was sunning itself until its body temperature warmed sufficiently for it to make a move.  Sure enough, after awhile in the sun, it moved directly for the pen.  By the time I got off the porch and close enough it was about a foot into the pen, going easily through the chicken wire.  I grabbed it by the tail, pulled it out and flipped it into the yard.  Then I tried to catch it with a rake to take it further away.  That's when I found out that they are very quick indeed.  It escaped under the porch and I haven’t seen it since. 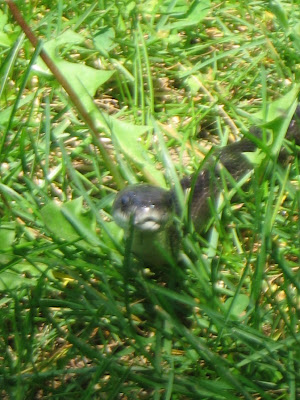 After several days in the outdoors I'm more confident of the chicken's ability to handle themselves.  Still you never know what nature will throw at you.
Posted by gardenvariety-hoosier at 6:59 PM

WOW! Great pics! Maybe when the chicks get a little bigger, the snake(s) will shy away from them. I hope so!