This weeks harvest:  Kohlrabi 11 oz (1 bulb), Boc Choi 13 oz (1 plant), Lettuce 1 lb (mixed varieties).  Lettuce is way better than store-bought.  A second kohlrabi was relegated to the compost bin.  I think the rainy weather and lack of sunshine made it split a few weeks ago, and as it grew it split even more.  It looks like enough cole crops will come out of their bed soon enough to make way for the next set growing indoors. 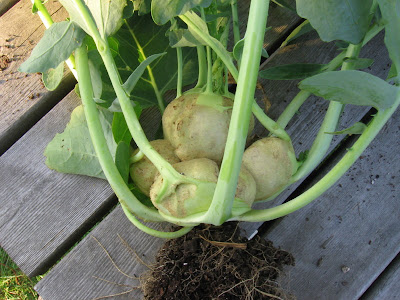 OK I already posted a picture of this broccoli plant a week ago.  Now that it's about ready to pick I’m going to claim that this is the best Brocolli ever.  I’m not kidding, just look at it.  Not because it’s mammoth, it’s not.  In fact it’s very compact, only a foot tall, but perfectly shaped with a nice size head.  But what really makes this variety, Major, stand out is it’s very EARLY.  In fact there is a kohlrabi next to it and Major will beat it by several days.  Pinetree claims 43 days to maturity, that’s a little optimistic especially in the overcast conditions we’ve had, but most broccolis take at least two weeks longer than this.  So – compact, nice size dense head, very early.  If it tastes as good as it looks, well. . . 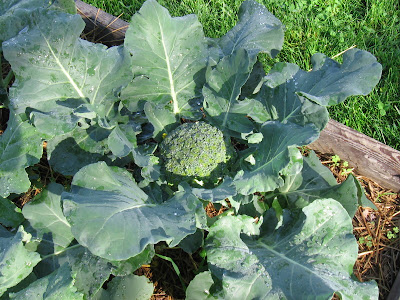 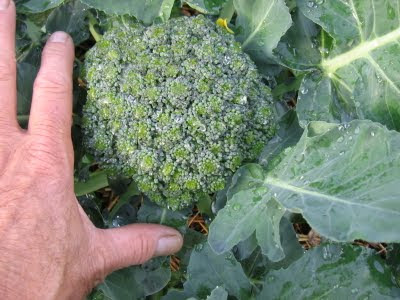 Friday I decided the beds couldn’t wait any longer.  I removed three wheelbarrow loads of compost from the bin, even though it was not as finished as I’d like it to be.  Two loads went into the 4x12 winter squash bed (acorn and butternut) and one load went into the 4x8 solanacae bed, which had already benefited from one load a month ago.  The compost was spaded in, the clods broken up with the hoe, and the beds raked out.  It was almost 80 degrees and muggy, and I became very aware that I’m not 20 anymore.  Whew.
The same day I set up the tomato cages and also the trellis on the north side of the winter squash bed.   These cages are made from 4x8 sheets of remesh.  Three panels are overlapped making a two foot diameter cage.  I hammered six foot fence posts into the bed and hung the cages on the post hooks.   The bottom of the cage is about 18 inches above the ground, giving the tomato plants almost six feet of vertical growth.  The nice thing about this system is the fence post hooks and the remesh are spaced the same, so the cage can be tied to the posts very solidly.   I set the first cage on two posts, and the second cage is set on one post and tied with wire to the adjacent cage. 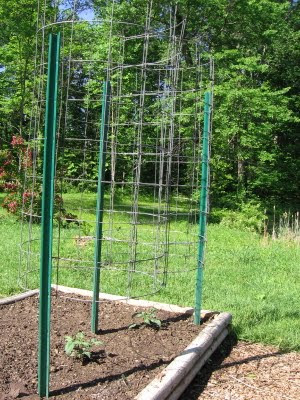 The chickens are doing nicely in their new home.  There was a close encounter with a black racer the first day, but that’s for the next post.  These snakes hold down the mole population, and I think the chickens are big enough now to coexist with them. 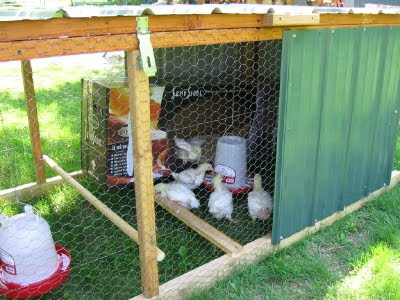 There’s a pair of Eastern Phoebes that built a nest above the sensor light beneath the eaves.   Quite a handsome little bird in the Flycatcher family.  It took awhile to decide if it was a Wood Peewee or a Phoebe – they are both very similar.  The white cleft under the chin and black bill point to the Phoebe.   I believe this is the female, the male’s head is not as dark. 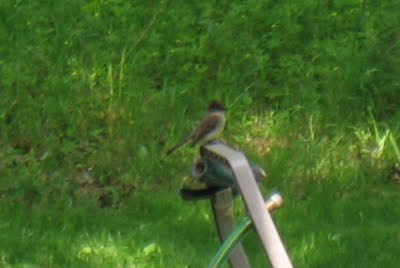 Posted by gardenvariety-hoosier at 4:43 PM

Everything is coming along nicely! The new chicken home is great and your young flock look quite happy in their new digs. The tomato cages look really sturdy and should do the job nicely.

That really is a strange kohlrabi. I've had twin squash often enough, but multiples on kohlrabi I haven't seen.

I am eager to hear what you think of the broccoli.

Phoebes are such wonderful bug-eaters!