Hope the eggplant doesn’t find out that summer is over.  The eggplants have some surface blemish but are sound.   Same with peppers and beans.  This month has had a lot of sunny warm weather and even though the days are short the warm weather plants are producing more now than they were a month ago.  Not at summer levels to be sure but any production is a bonus at this point. 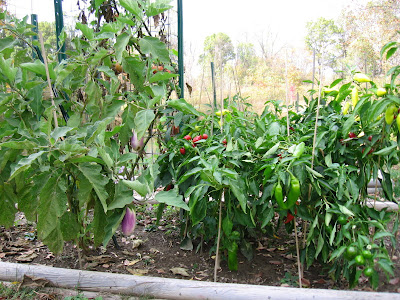 The last patch of Provider beans produced almost two pounds this week.  Many of the beans had to be tossed because of beetle damage.  About 10 days ago I picked any beans of size then sprayed with pyrethrins to control the bean beetle.  Since then I’ve given up on spraying.  I’ll probably get a few more pickings before the cold weather and the beetle combine to put an end to it.
I’ve wanted to make salsa with the bumper crop of red hot cherry peppers.  The Brandywine tomatoes are no more, except for some orange split tomatoes on the picnic table which may or may not mature, so I used a can of plum tomatoes, or plum-shaped tomatoes as it says on the can (????). 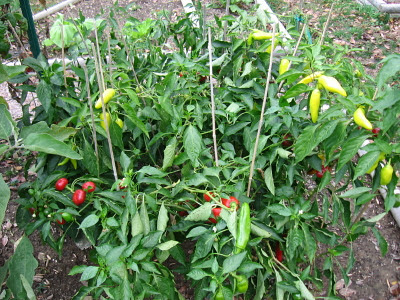 While grilling chicken this weekend I put two whole Cubanelle peppers at the edge of the grill and let them cook with the chicken, turning them several times.  By the time the chicken was done the Cubanelles were lightly charred all around.  I put them in a plastic tub and sealed it.    After an hour the skins slipped easily off the peppers.  A small kitchen triumph for a novice, this is the first time I’ve successfully deskinned a grilled pepper.  And the flavor,  sweet and smoky, perfect for salsa.  Here’s how it was made:
Plum tomatoes from 28 oz can or better yet fresh tomatoes
2 Cubanelle peppers, grilled and deskinned, deseeded
6 Red hot cherry peppers, seeds removed
2 Hungarian wax peppers, seeds removed
1 small onion, diced
2 cloves garlic, minced
Juice of ½ lime
4 tablespoons red wine vinegar
Parsley and greek oregano, fresh

Put tomatoes in a blender and break up briefly.  Stir onion in a little olive oil at low/medium heat until translucent to remove pungency.  Add garlic to onion, stir briefly then add to blender.  Dice peppers, parsley (use a lot) and oregano (not too much), add to mix.   Add lime and vinegar (I added vinegar later to give the salsa more bite, more lime juice would probably work as well).  Add tomato liquid to desired consistency.  Salt to taste.  Blend to desired texture.  Let sit overnight.
How’d it turn out?  Darned good.  It wasn’t hot enough for my taste, which was surprising, since the red hot cherry peppers have been comparable to jalapenos in heat.  Maybe the autumn hot peppers don’t have the heat of the summer peppers.  Next time I’ll throw a Serrano into the mix.  The flavor was excellent, slightly smoky but fresh.  It wasn’t a good sauce for eggs, but as a fresh dip for tortilla chips it was nearly impossible to stop dipping.
Yields for the week:  Beans 31 oz;  Eggplant 10 oz;  Sweet pepper 10 oz;  Hot pepper 13 oz.  Closing in on 200 pounds for the year.
Posted by gardenvariety-hoosier at 5:42 PM

Sounds like a great salsa. I like to roast my peppers on the grill the same way. I love the smell of roasted peppers.

That salsa sounds heavenly. I adore the smell and taste of roasted peppers. Nothing quite like it. Yum!

I have a lot of peppers to grill from cleaning off the plants. I love that smokey flavor. The salsa sounds good.

Your pepper plants look really healthy and I love the sound of that salsa.