The soil in the beds is still frozen, except for the bed covered by the plastic greenhouse.  That’s right, winter just won’t go away.  I think I’ve made it clear that it is no longer welcome but it seems like it just doesn’t care what I think.  I probably should not complain.  Just look at what people in the Northeast are enduring.  They may not dig out of the snow until early summer.


Since I’m not motivated to attempt any woodworking in the pole barn or any other outside work it’s a good time to decide what projects I want to work on this year, and research some ideas on the Internet.  I’ve found that whenever I come up with an idea the chances that it can be googled and found on the WWW are pretty good.  It’s too bad that many of the videos that people make about their ideas are so consistently bad.


In the last post I moved one of the two trays of onion seedlings into the mobile greenhouse.
After two days I brought the tray back inside and put it under the lights.  There’s been no sun for three days and the temperatures have hovered in the 20 to 30 degree range and I think the onions would not have fared well if left outside.  I’d prefer to have one tray in the greenhouse so the remaining two trays can be lined up directly beneath the flourescent fixture but for now that’s impossible.   When the trays are crossways to the lights I raise up the light as far as it will go and that dilutes the light.   After this picture was taken I put a Reflectix curtain on the front side to reflect more light onto the plants. 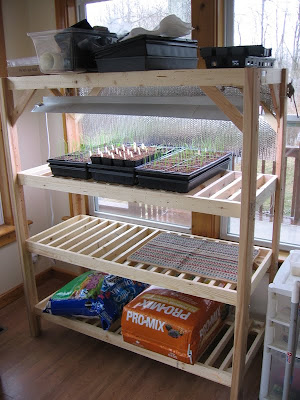 This time of year I seed a set of brassicas (cabbage family) every 12 days.  Some people seed brassicas in large batches.  Maybe they freeze the excess.  I like to have a continuous supply so I seed  a few plants in intervals.  Brassicas usually take about three weeks from seeding to set out, so the 12 day interval allows for a set of seedlings to go out into the beds shortly before a new set is seeded.  That way there are at most two sets of brassicas under the lights at any time.  For most of the spring I have only one or two trays under the lights, except now.

A lot of gardeners use pressed blocks for starting seedlings which have a lot of advantages.  My operation is small and pretty basic and it’s hard to justify the expense for the block pressers.  I use plastic pots from plants that I've bought.  The brassicas are seeded in pots 3 ½ inches deep and 2 ½ inches square.   I’ve found that using these larger deeper pots for brassicas instead of multicell trays reduces transplant shock greatly. 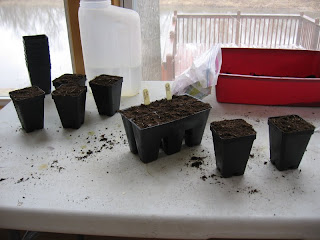 The multicell tray in the picture was seeded with lettuce.  It is also a deep tray.  It always amazes me how fast a new seedling, even a shallow rooted plant like lettuce or onion, will send down a root.

The seed starting mix I’m using this spring is Miracle Gro moisture control potting mix.  I bought a large bag to fill up an Earthbox and I’m using what is left for seedlings.  It looks like it is much the same mixture as a seed starting mix, except it’s got about 2 to 3 times as much nutrient, is not as fine and costs a lot less on a volume basis.  I put some in a container, pick out the wood chips, break it up by rubbing together between my hands, add a teaspoon of mycorhizae and enough water to wet the mix but not saturate it, then fill the pots.  After filling the pots I drop them on the table once or twice to settle the mixture but not pack it.

The first set of brassicas was seeded on Feb 18.  It was a small set that will go in the bed under the plastic greenhouse.  Today I seeded Major broccoli (3 pots), Grand Duke kohlrabi (2 pots),  Kolibri kohlrabi (2 pots), Gonzalez cabbage (2 pots) and Tatsoi (1 pot).  I seeded two cells per pot.  I don’t start seeds in a large tray then later transplant them into larger pots because I have plenty of space to seed them into the large pots right away.  I won’t plant out all of these either.  For each cultivar one of the plants may be considered a backup in case the first plant goes into the garden and fails.  Having extra plants is the best insurance policy.


Here’s the proposed timetable this season.  There are seven sets of brassicas planned, although the last set may be just Gypsy broccoli which is a heat tolerant variety.  I don’t start tomatoes or peppers since there aren't that many to plant.  I buy the seedlings at the Bloomington farmer’s market or May’s greenhouse.  Later in the season I'll fill out the actual times that plants went into the ground. 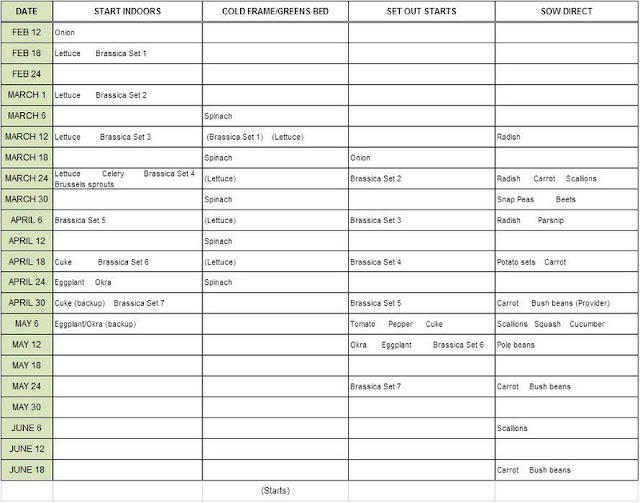 Posted by gardenvariety-hoosier at 4:39 PM