The season is ending with a fizzle not a sizzle.  Tomatoes are long gone, cucumbers are mostly done, but the vines still produce an occasional cuke that I give to the rabbits.  The raspberries have some kind of disease and are not making many berries.  Mostly what's coming out of the garden right now are beans and okra, and the beans are nearly finished.  These are Millionaire okra.  The beans are a mix of Fortex and Provider.  The Marengo Romano pole beans have succumbed to rust. 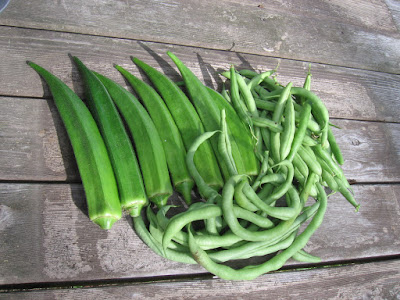 It seemed like a bad year for beans, but so far 30 pounds have been picked, not bad from a 7 foot row of pole beans and two rows of Provider bush beans.  That's only 5 pounds less than I got last year.

There's still winter squash to be picked - Metro Butternut and Teksukabotu.  I don't know if they will be very good.  They lost most of their leaves to fungus and will probably not fully develop their sugars.  Some of the vines put out new leaves and that may help. The rest of the week will be sunny and I'll harvest them before the next major rain. 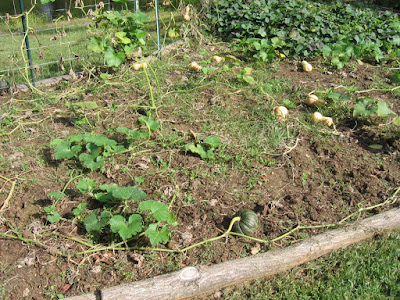 The chili peppers look like they will be ready soon.  Most of these plants are used for making chili powder.  The Joe Parker New Mexico in the front are already ripe, while the Anchos are a little behind them.   A week of sunny weather should do the trick.  The tops of the ancho plants were eaten by tomato hornworms.  Usually the parasitic wasps get them, but not this year. 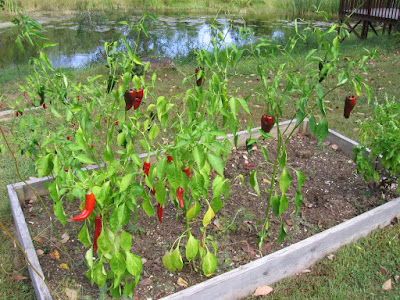 To see what other people are growing, head on over to http://daphnesdandelions.blogspot.com/
Posted by gardenvariety-hoosier at 5:33 PM

Two of my butternuts have died back a lot from yours. For me that is pretty typical, but I have one plant that is still totally green with no sign of mildew or anything. I wish they could all grow that well.

It sometimes seems that the harvest peak, which takes far too long to get to, lasts only a moment - and it's all downhill from there. I love the way the peppers "decorate" the pepper plants...they look so beautiful hanging there like that.

Sounds like your growing season is definitely nearing the end. Will you be using the chillis to make paprika, or are they going to be made into salsa?