It's the last day of August and I'm still getting plenty from the garden.  Snap beans are back big - I got 4 pounds this week and expect as much next week.  Here's the first picking from last week, along with a summer squash and okra: 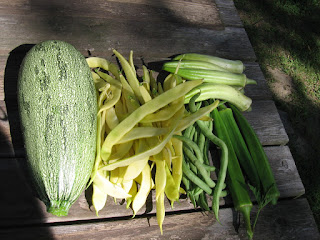 That may be the last of the summer squash for awhile.  The lone squash plant has lost many of its leaves to fungus but it is showing some new growth.  Since I'm not a huge fan of summer squash I'm not real concerned about its fate.  The tomato plants were removed last week - too much disease - and the last tomatoes were harvested.  Most of them are Super San Marzano, with some Big Beef and a Granny Smith tomato, and of course more okra. 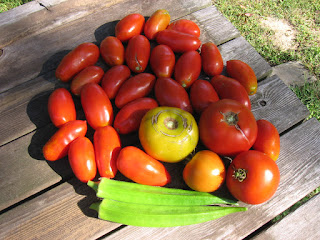 More beans.  The Marengo Romano are outproducing the Fortex about 2 to 1, but that may be a seasonal thing.  They are both tasty but I prefer the Fortex. 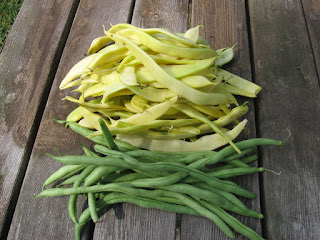 A few raspberries - Autumn Bliss and Caroline.  Most of the time I eat them straight off the vine while working in the yard. 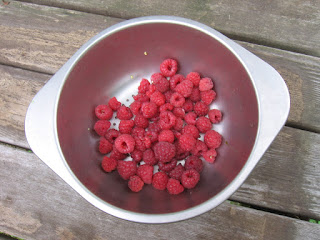 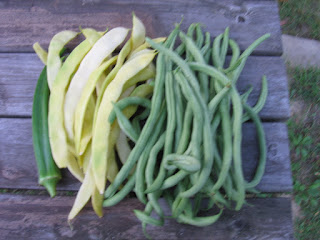 The Calypso pickling cucumbers are nearly finished.  I've canned enough to last at least a year and starting last week any new cukes were fed to the rabbits, who appreciate them greatly.  From 4 plants I picked 62 pounds of pickling cucumbers and another 15 pounds of Diva slicing cucumbers from single plant.  So far this year nearly 260 pounds, a bit ahead of last year.  The tomatoes were a disaster, about 16 pounds from 4 cages, but the cucumbers took up the slack. 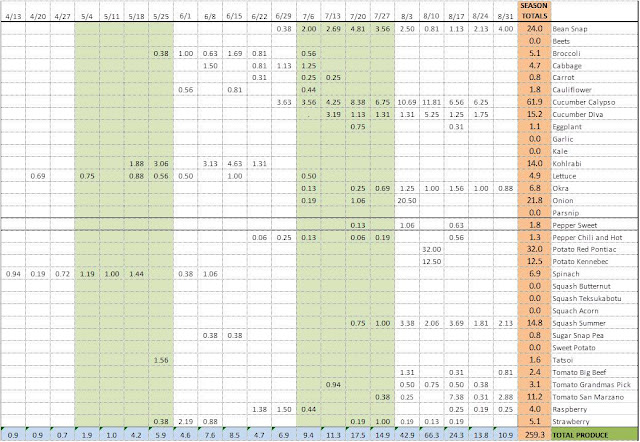 To see what other people are growing visit http://daphnesdandelions.blogspot.com/
Posted by gardenvariety-hoosier at 5:36 PM

Nice haul of beans. They are nice in that way, if you keep them picked they will come back for a second crop. Mine are long gone, wiped out by some virus I haven't had before. All around, a strange summer, but you have to be happy with the cucumbers.

Those beans are so lovely. My fresh beans have been done for a while but at least I have some in the freezer to take me at least into December. For such an easy to grow veg, I sure had a hard time with them this year. I'm with David - it has been a strange summer - and here I thought it was just me.

I have some Super San Mafzano. The plants aren't tall, but they're strong and showing some good blooms. Real tomatoes soon, I hope!

I have some Super San Mafzano. The plants aren't tall, but they're strong and showing some good blooms. Real tomatoes soon, I hope!

Your tomatoes provided a beautiful final harvest and I love the fact that your beans are getting their second wind and producing another wave.

Cucumbers are just so productive. Not that mine were as good as yours this year, but still pretty good. Most of died of wilt though. A couple plant have hung on and give me some cukes occasionally.

Yes, this time of year is definitely the bean's moment in the spotlight. I'm not so keen on the yellow varieties. They never seem as good as the green ones - and I like the Runners best of all.