It's a beautiful day in the Midwest, sunny and 64 degrees (18 C).   And it's not just today, the forecast calls for the same balmy weather for another week, with no low below 40 F.  That would be normal in April, but this is mid-February.  If this warm spell keeps up, many deciduous trees will leaf out, as they did in 2012.  That year an early warm period followed by a later hard freeze killed the leaves on any trees that budded out too early.  Those trees had to leaf out again, which was especially hard on the tulip poplars.  I'm worried that my two apple trees will leaf out only to have the tender growth killed by frost, but there's nothing that can be done.  Usually I prune the apple trees in early March, but this year I'll prune them this weekend.  Strange and bizarre weather.

The spinach that was sowed last October is doing really well under the plastic greenhouse.  There are two rows of Burpee's Double Choice, which I have overwintered for years, and one row of Reflect, which was overwintered the first time this year.  The Reflect spinach is growing really well, even better than the Double-Choice.  If it doesn't bolt as the days get longer it will be my first choice for overwintering spinach in the future.  I expect a small harvest of spinach next week when I thin the rows.  A row of Pinetree winter lettuce mix also made it through the winter. 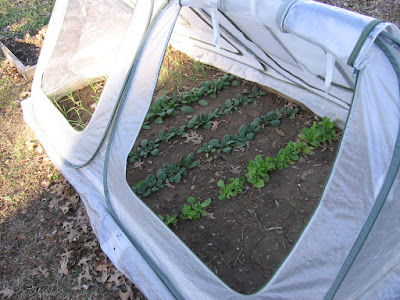 Several years I ago I came up with this self-watering system for starting seedlings.  The system uses two trays, a solid tray and a tray with slits or small holes in the bottom.  Three pieces of PVC pipe are screwed to the perforated tray.  The pipe makes a space between the two trays that will hold about two quarts of water. 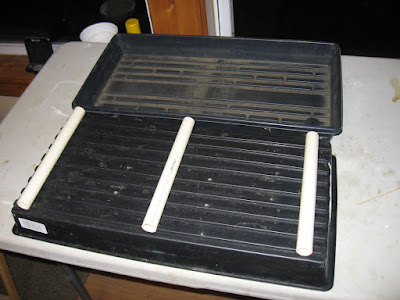 A wicking mat is set into the slitted tray.  The ends of this tray are cut so the mat can be pushed through.  In the past I bought this wicking material from a nearby store called Worm's Way, a hydroponics supplier, but they closed their retail outlet near Bloomington this year. with the conversion of the highway to Interstate 69 shutting off their road access.  At a Michael's craft store I found a bag of quilt filling, and it looks exactly like the wicking material I used to buy.  It is cut it into pieces to fit into the trays. 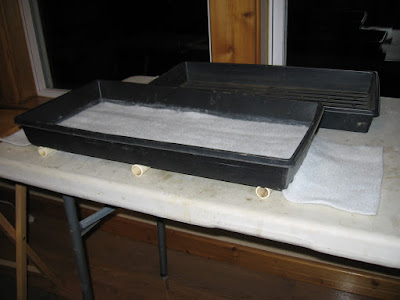 The ends of the wicking mat are folded under the bottom of the perforated tray, which is set into the solid tray.  Add some water and it's ready for pots and cell packs.  The beauty of this setup is that it provides just the right amount of water to the plants and the reservoir will last about a week before it needs replenishing.  With larger plants like tomatoes and okra the water will last several days, still a real timesaver. 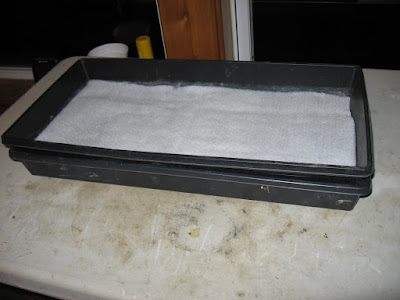 I seeded 12 cells of lettuce, enough to fill one half of an Earthbox.  I'll seed 12 more in a few weeks.  The seedling mix is Miracle-Gro potting mix.  Maybe it's not the best mix but it does the job, and it has enough fertilizer in it to sustain tomato and pepper seedlings until they are set out.  I put some mix in a plastic tub, added 1/2 teaspoon of beneficial microbes and rubbed the mix with my hands to break up any clumps.  A little water was added to moisten the mix then it was added to the cell packs. 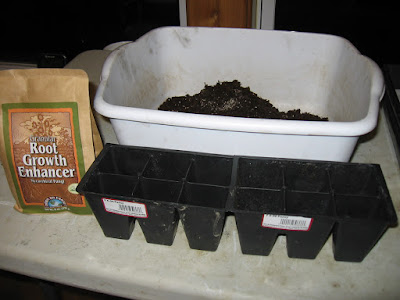 The cell packs are 3 inches deep.  I like to use the deeper pots for lettuce and brassicas because the seedlings seem to get a better start as long as the root ball can be kept intact when it is time to transplant. These are pots that originally had some annuals from the nursery (frugal gardeners motto:  don't throw anything out).   Once seeded the pots were set in the trays and the tray was covered with a plastic lid until the seeds germinate.  I don't use bottom heat except when starting the peppers, the rest germinate fine at room temperature.  The light will be turned on a 16/8 hour cycle once the seeds germinate. 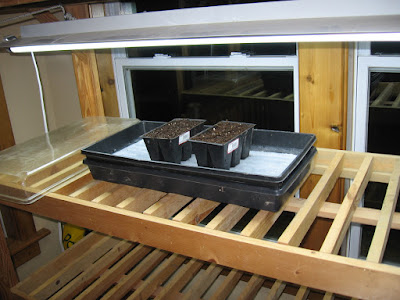 The light unit is a modified shop light with four T8 flourescent lights.  Two of the lights are 6500K and two of them are 8000K,  so they are strongest in the blue region, which tends to give stockier growth.  I found the 8000K bulbs at Rural King.  They are probably used in chicken houses to mimic daylight.  The old rule of thumb is reds for flowering and blues for foliage.  I've done some research on this and found that even the 'warm white' 3200K bulbs are not very strong in the red region that plants need, which is why I go with the high K bulbs. 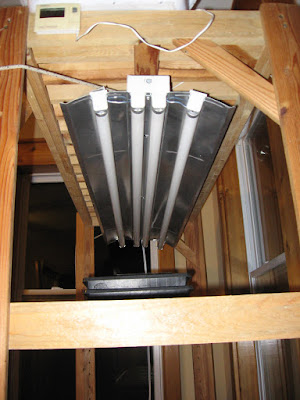 When the four light setup was put into operation a few years ago two of the bulbs were Gro-Lux bulbs, which provide a red/blue mix of light perfect for photosynthesis.  Under this light the seedlings grew wonderfully the first year, but toward the end of the second season the seedlings became spindly and grew poorly.  So the bulbs were good for about a year, and at their cost I wasn't about to replace them every year, which is why I go with standard daylight bulbs now.  Anyone interested in more detail about lighting and seed growth, this post from 2013 provides some useful information.

This is just the start.  In a few days I'll seed 72 cells (a full tray) with onions.  Most of the potting-up work I enjoy, but the onions are pure tedium.  Then it will be time to start the first set of brassicas.  The season is underway!
Posted by gardenvariety-hoosier at 10:17 PM