or Making the garden great again.

Was it ever great?  Was it ever that bad?  Let's not dwell on such pesky details, it's time to put out the old and replace it with whatever.  It looks like the health care system for the garden has to go, after all the tomatoes had a bad case of blight last year.  The current system of maintaining the garden health, combining organic and cultural controls, has been imperfect (although insect problems have diminished greatly over the years), so it obviously has to go, to be replaced by an obviously much better plan that exists for now in a nimbus cloud of happy thought, ready on cue for implementation.  Now, there may be some issues with completely destroying a health care system that actually works, although imperfectly, something a self-promoting billionaire who claims to have all the simple answers may have realized when he said - "Who knew that a health care system was so complicated?"   Actually just about everybody who needs to navigate the byzantine passages of a for-profit system, which doesn't include billionaires, another pesky detail.

Maybe I was thinking about something not quite the garden, and I don't actually have any plans to throw out what I've been doing in the past, just improve it.  The garden beds, now dormant, are looking quite nice, thank you.   Some of the beds have a mat of dead cover crops over them.  I think this is much better than bare soil.  Poking a finger in the soil reveals a nice loose tilth beneath. 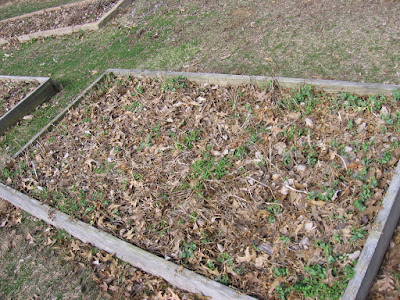 Field peas that were seeded later in the season last year managed to overwinter quite well and are growing again, along with a lot of chickweed.  Both of these plants are good rabbit food, so I'll be harvesting this for the bunnies until it is spaded under for planting. 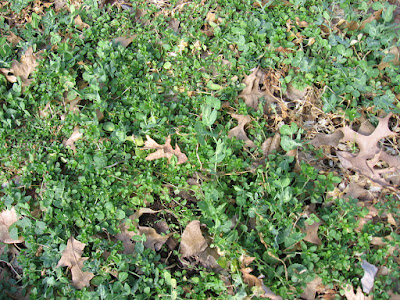 The large squash bed is another matter.  Ground ivy has occupied much of the area and it's a real nuisance.  I'm trying something different this year.  There are still a lot of leaves that blew against the buildings.  A few cartloads were gathered up and spread over part of the bed: 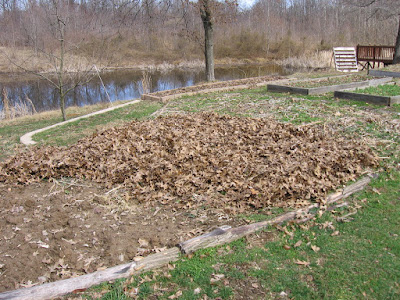 The leaves were then lit off, in the hopes that the fire will kill the weeds and any seeds on the surface: 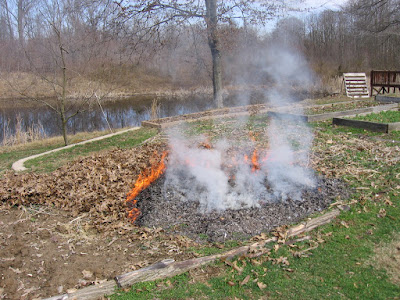 After a heavy rain last night, I checked the area this morning.  Where the fire burned completely it looks as though the weeds were killed.  I plan to gather some more leaves and burn them over the rest of the bed.  In a few weeks I'll seed the entire bed with field peas. 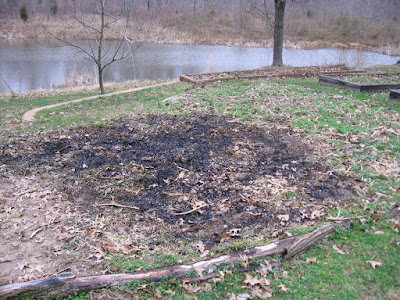 The two apple trees were pruned about a week ago.  I'm pruning them much earlier this year due to the mild weather.  Fortunately we've been having some days with more seasonal temperatures and I'm hoping that the cool nights will keep the trees from leafing out prematurely.  This is the Golden Delicious tree.  It had a lot of watershoots that were removed and the leader was cut down several feet. 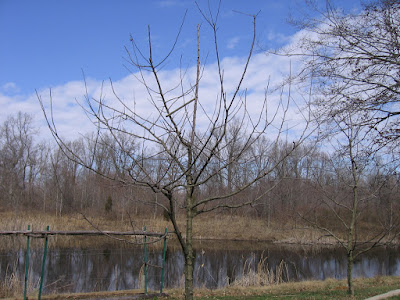 The leader on this Fuji tree required even more drastic cutting back - it was way too high.  The surrounding branches near the leader were also cut back so they weren't any taller than the leader. 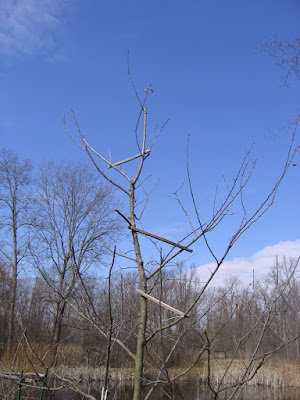 A few days ago I removed the plastic greenhouse from the winter bed.  A cage with chicken wire on the sides was put in its place to keep out any wandering rabbits, squirrels, or dogs.   There are four rows of garlic, each row a different variety,  three rows of spinach, a row of lettuce and a row of bunching onions. 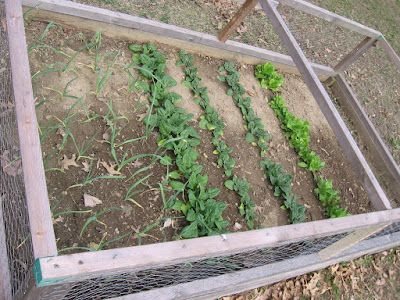 Last autumn I tried seeding a new variety of spinach, Reflect, for overwintering.  It's the row on the left side.   The variety that I've been growing for years, Double-choice, is represented in the two rows on the right.  I'm always happy to trial a new variety and find that it works even better than what I've been planting in the past, and the Reflect spinach is doing markedly better than the old variety. 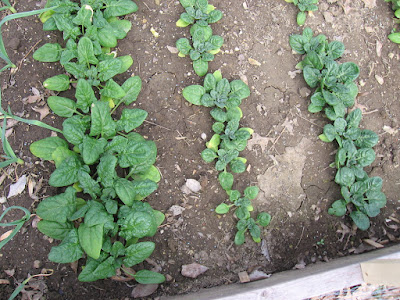 In a few weeks the first set of brassicas and lettuce will be ready to go outside.  Looking forward to a new growing season and hoping everyone else's plans work out.

Posted by gardenvariety-hoosier at 2:59 PM

Oh yes, I'm well acquainted with the "happy cloud" of the much better plan for the garden. Your spinach looks great - last year, the overwintered spinach was really the saving grace of the spinach harvest. I didn't get around to sowing any this winter so, if our weather is as warm as it was last year, it may be slim pickings.

Such a big area! Such an enormous amount of work!