There are a lot of ash trees on my property and I've always been concerned that the emerald ash borer would reach this area.  A few years ago I read that it was identified in Morgan-Monroe state forest, about 25 miles from here.  I had hoped that it would take it a while to make the jump over farmland to this area, which is about 50% forested.  Maybe I just haven't noticed the damage, but recently it became very evident.  It's here.

There are two kinds of ash trees around my house.  A large white ash tree grows between the house and the pond.  The rest of the ash trees are green ash, a smaller ash tree that is definitely another species (I compared the leaves and twigs a few years ago and there are, even to my eye, obvious differences).  To me, the green ash is the perfect yard tree, nice shape, not messy, and it doesn't get as large as the white ash.  This one, about 40 feet tall, is in the driveway circle. 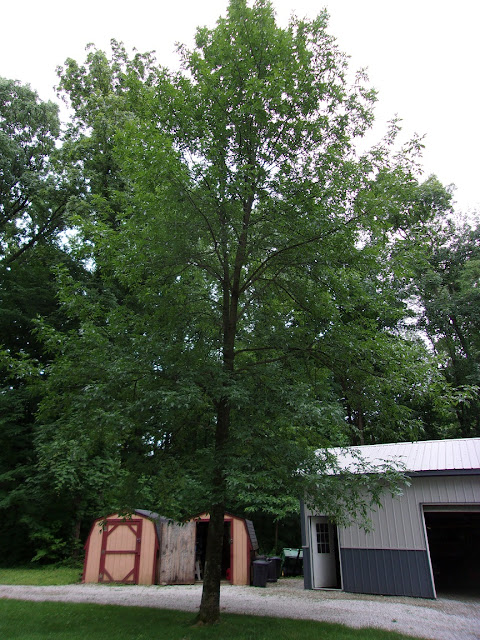 These trees are also in a buffer area between the yard and the woods, an area that I mow with a brush cutter about once a month.  Four of the five trees are green ash.  There are several more small to medium ash trees growing at the edge of the woods. 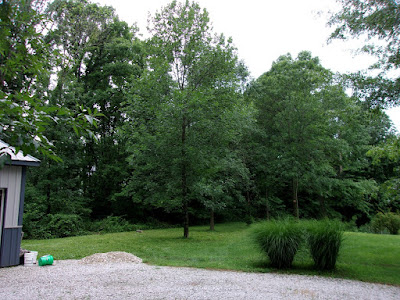 Three of these trees look fairly healthy, although I have no doubt that they have already been infested.  One of the trees is near its end.  The crown is nearly barren, there is woodpecker damage to the bark everywhere, and the base of the tree is sending up shoots because its vascular system is too damaged to move nutrients higher in the tree. 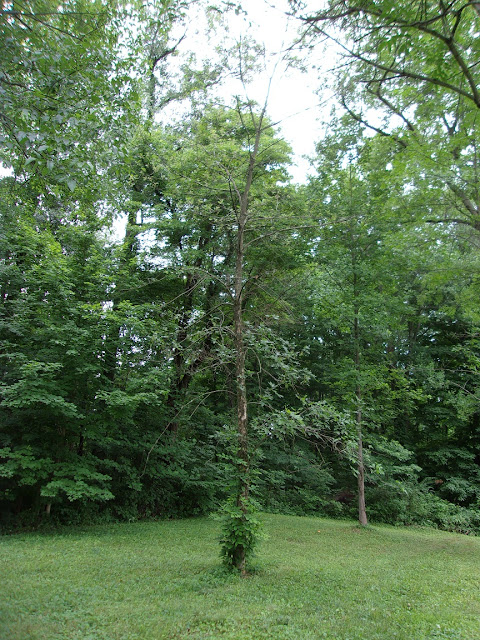 A closer look shows the bark stripped off by woodpeckers trying to get at the borers, and the telltale D-shaped exit hole where the adult beetle emerges from the tree. 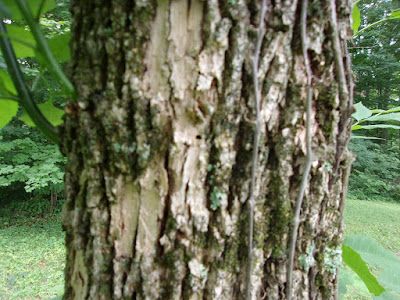 Yesterday I cut down a green ash that was a few feet in the woods.  It took all day to fell it, carefully remove the poison ivy from the trunk, remove the limbs, cut it up into logs, then split, move and stack the logs.  On the positive side I got a face cord of wood from one tree, which I will burn this winter.  The adults have already emerged from the trees and larva are actively feeding in the phloem at this time, so cutting the trees should kill most of the larva.  I expect to cut several more trees in the coming week, including the one in the photo above.

The tree that really worries me is the large white ash behind the house.  It's over two feet in diameter and felling it is beyond my capabilities, so I'm looking at some expense here.  Still it looks healthy so far.  It's thicker bark may slow the beetles somewhat.  I've read that treatments are effective but a tree must be re-treated every year.  I'm leaning more toward removal, since there is a very nice black gum tree just a few feet from this ash, which is on the left in this picture.  Before this tree can be dropped, I will have to remove the raised bed frames.  A winter job for sure. 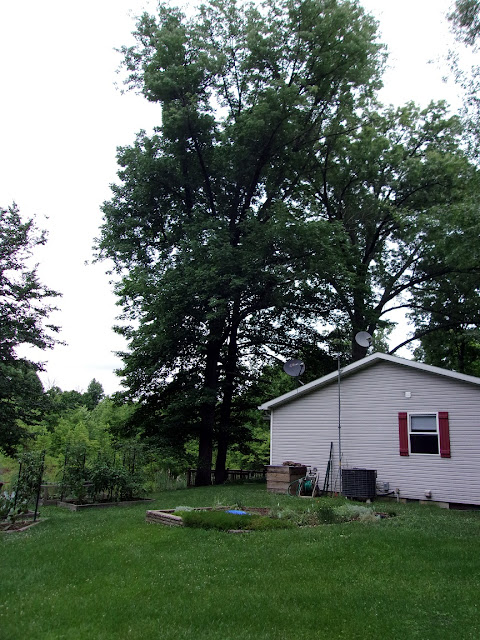 It's a shame this had to happen, but it's something that looked inevitable, a matter of when not if.  The woodlot has a number of American elms growing in it.  They get large enough to reproduce, but never survive to any size, another iconic tree, along with the chestnut,  that's been mostly lost to an imported biological agent.  Asian ashes have evolved mechanisms to fight off the borer, and one can only hope that a few resistant trees will survive and reproduce here.

Posted by gardenvariety-hoosier at 4:56 PM

It's a tragedy about the ashes. EAB is a major problem here in much of New Hampshire. They've imposed quarantines on transporting firewood. I have quite a few ash trees, but most have died. I can't say for sure it's EAB until I cut them down. We already had an unspecified disease hitting the ashes, and EAB will finish them off. Chestnuts, elms, and now ashes. Soon we won't have any native trees left, and it all could have been prevented.