It seems like this area went from winter to summer without stopping for spring.  Yesterday I was reading an article in the Bloomington paper that noted that April was the 3rd coldest April on record while May was the hottest May on record.  That's quite an abrupt transition.  It's been a real heat wave for several days.  I took this picture at sunset on Saturday evening, while it was still nearly 90 degrees.  The sky was mostly cloudless but this one cloud boiled up like a storm cloud. Nothing ever came of it. 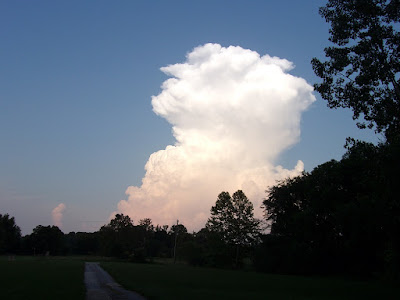 The weather has had it's effect on the vegetable garden for sure.  I usually begin harvesting cole crops in May, but this year I picked the first cabbage a week ago.  The cutworms did not help in that regard.  Yesterday I picked the first broccoli and kohlrabi.  The kohlrabi should have been picked earlier. At least the summer crops are moving right along.  This slicing cucumber should be ready in a few days, and it looks like enough pickling cucumbers will be ready shortly to make a quart of refrigerator pickles. 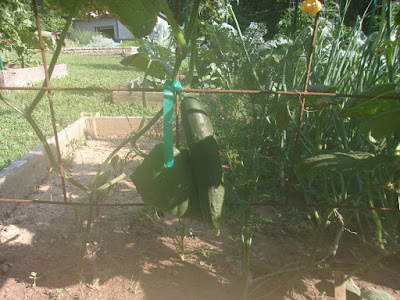 An unidentified bug has been attacking the cucumbers and causing the growing tips to turn brown.  Fortunately the plants are healthy enough to start new vines and I'm hoping the bugs can be kept under control.  The first Japanese beetles appeared yesterday.  I was hoping that the hard winter had killed most of them, but they seem to be abundant.

The tomatoes are looking good, with no sign of disease to this point.  I planted two determinate sauce tomatoes - Health Kick and Plum Regal.  I didn't think a tomato could be more vigorous than Plum Regal but Health Kick is actually setting more tomatoes. 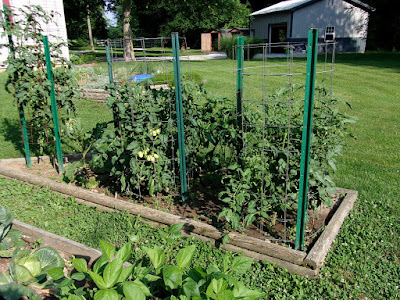 To see what other growers are harvesting, head on over to http://www.ourhappyacres.com/and have a look.
Posted by gardenvariety-hoosier at 10:49 AM

It is so sad to have missed spring. I do however enjoy the abundance of summer veggies that I am getting already. Hope you can get your cucumber problem under control. It is a different challenge every year in the garden.

Crazy weather! The leap into summer is never quick here and this year seems slower than usual. Good luck with your cucumber problem.

Our weather is similar, no doubt a bit hotter. We had no spring, for sure, just a long winter that went straight to summer. Yikes on the Japanese beetles too! I haven't seen them here yet, but I better look. They love the blackberry leaves. Good shot of the storm cloud! I bet somebody got something.

Our weather is similarly driving us a bit bonkers with the extremes & our harvests have been delayed this year. The summer forecast doesn't look much better with it being "hotter than usual". At least the heat lovers like peppers and squash will be happy, even though the gardener will likely not be.

Japanese beetles are so terrible. We used to get droves of them here but they've all but disappeared. Scary about the insects spreading disease to your cucumbers, but it sounds like you're going to be harvesting soon.