I haven’t posted since last year, and it seemed like time to make some changes to the blog.  Limestone Country Veggies was kind of, well, pretentious, so the title has been changed.  I considered calling this Hoosier Hick’s Bean Patch but then decided to just go with my first name.   I also fiddled with the background design from Blogger’s templates.  I’m hoping that the fonts changing on a whim will not be such a problem this year.  We’ll see.  Seems Blogger doesn’t like it when I paste the text in from Word using a font not in its template.  Anyway, hope it’s readable and the information useful.  On to the post.


More warm weather, ground thawed out, time to pull up more parsnips.  I pulled up 2 more rows.  These are big snips, some of them were a foot and a half long, and that’s just the taproot that come out of the ground.  Even after tossing out a few of them there were 3 pounds, 14 oz of parsnips.  Parsnips are great for breaking up the soil – after I pulled them up the soil where they grew looks like it was freshly tilled.  There must be several more feet of taproot left in the ground that pierces the heavy clay undersoil and brings up nutrients.  The taproot left behind will decay and leave channels for earthworms to use.  One of the ‘snips that I pulled up had a big fat worm hanging on to it.   And yes the grass is still green. 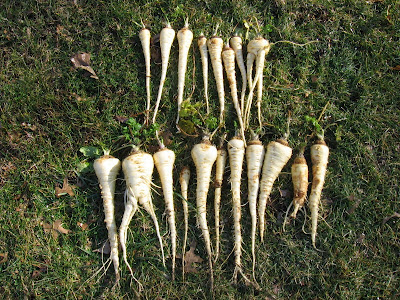 That really fat parsnip with the forked roots may look a little funny but it was delicious sliced, drenched in olive oil and roasted.  A good freeze really makes them sweeter.  There’s 2 more rows in the ground, another batch to pick in a few weeks.
These are the beds in January.  It’s hard to believe the grass is still green, the pond is open.  It has been a very warm winter.  The past two winters have been very cold, so it is a relief.  Usually the pond is several feet down in the winter, but not this year, it’s been very rainy. 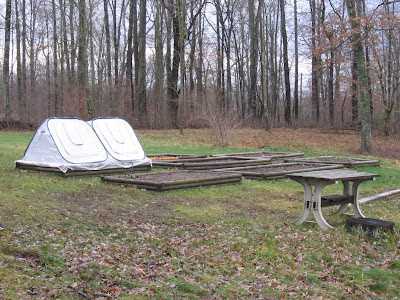 Posted by gardenvariety-hoosier at 7:02 PM

Beautiful harvest...you have an amazing view. So day I hope to have something close to that view

Great parsnip harvest, they are so much tastier this time of year.

Love the new blog look and the fonts look okay to me?! That is a nice harvest of parsnips and you have more in the ground yet to harvest. I dug up the last of my parsnip patch last week - but have a few of them still in the fridge crisper to use. They are an underrated and often overlooked veggie.

Those are big parsnips, a foot and a half! And not tough and woody, fabulous. I do love parsnips but haven't tried growing them yet. Perhaps this will be the year. It's been quite mild this winter out my way as well, but very dry.

I like the name change, not sure if I visited under the old one, but this one I like very much. I also like the symmetry of posting about parsnip harvest as your last post last year and first post this year.

Beautiful parsnip harvest. The weather has been quite warm this winter. Even up in Maine we only have a few inches of snow on the ground.

I agree that blogger can be frustrating when you copy and paste text from word. I usually paste the text into TextEdit/Notepad and strip all the word formatting, then copy it again and paste it in Blogger. Still sometimes Blogger seems to do its own thing.

Lovely parsnips! yes, it's been a funny winter here too, many people all over the country are talking about how strange the weather is...

Lynda- The greenhouse is a Flower House, from Park Seeds. It is basically a clear plastic pup tent. It has 4 small flaps that are screened and 4 large zippered flaps that open up most of the greenhouse. It's held up well so far - this is the third winter.

Hi Mike, wow great looking parsnips! must admit i havn't ever grown them but maybe i sould give them a go.

Your parsnips look great! I am hoping to grow a few next year. Never tried them before.