You've got to have a PLAN

Today is the day to start onion, lettuce, spinach, broccoli and bok choi in the sunroom.  During the winter I closed off the sunroom from the rest of the house to save heat, and was also using it as a work room for a remodeling project.  The sawhorses, paint and tools were removed yesterday and a table and worklight were set up for starting seeds.  Kind of like changing the props between acts of a play.


Here’s the plan for the beds (click to enlarge).  The two beds on the right front in the drawing are actually on the left in the yard.  I try to keep plants in the same family together in one bed and change locations every year, and wait at least a three year interval before returning a plant family to the same bed.  With only 250 sq ft of growing space I try to go vertical when possible.  The crosshatching on the edge of the beds is trellis, and the crosshatched circles are cages. 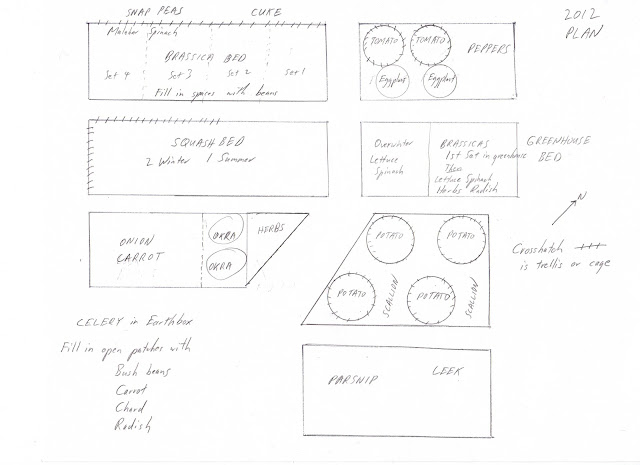 The tomatoes, pepper and eggplant (solanacae family) all go in one bed.  Most of the cabbage family are grown in another bed, and squash in another.  The greenhouse bed starts out with greens and later as spaces open up beans, carrots or something else go in.  I try not to plan out too specifically because I usually make changes as the plants go in – the clash between theory and reality – and you never know what Ma Nature will throw at you.
I’m going to plant the potatoes in cages again this year and allow more space between cages.  Last year the potatoes that got the most air circulation had less disease and were healthier.  I don’t reserve a space for bush beans, but just plant them in areas that open up in the beds.  Usually the first open spaces are in the brassica (cabbage family) bed after the earliest plantings come out.
Only two spinach plants (Space) overwintered in the greenhouse bed.  The seeds were viable last spring but most did not germinate in the fall.  I tried to find some spinach seeds last fall but had no luck, so it’s going to be a race to get some spinach started this spring.  This morning I looked through the seeds and couldn't find the spinach.  Then I went through the receipts from the seed companies and found out the spinach seeds are on backorder.  Time to buy some seeds at the farm supply store.
There’s been a lot of rain this winter, only a few light snows, and the ground is saturated.  We need some sunny days to dry things out.  It won’t be long before work begins in earnest.
Posted by gardenvariety-hoosier at 4:43 PM

I really like your garden plan...and such a beautiful location...I'm envious. I won't be planting anything out in the garden until next weekend. I have planted several transplant trays. Most everything is up...except those pesky peppers...always the last to germinate!