The first set of seeds were planted this weekend – onions, spinach, lettuce, broccoli, bok choi, and kohlrabi.  The onions were the most tedious - 96 cells of onions, mostly two or three seeds per cell.  Here’s the onion breakdown:  Copra 36 cells, Spanish Gold 18 cells, Utah Jumbo 18 cells, Red Long of Tropea 24 cells.  The first three varieties are yellow storage onions. The Red Long is an Italian heirloom that is oblong in shape, really beautiful.  I’ve still got a few onions left from last year.  It’s amazing how well homegrown onions store.  They have been in a base cupboard since last summer and only a few made a green shoot. 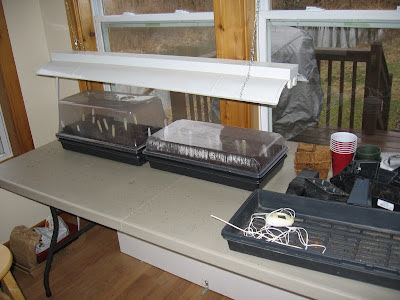 I get by with a four foot shoplight and two flats.  I may have to put together another flat, since the onion seedlings fill one flat and then some.  The system consists of a bottom tray as a reservoir, and a perforated top tray that has three PVC tubes attached to the bottom (the top tray is shown below). A wicking mat goes through the ends and hangs in the reservoir.  The water will last up to ten days with this setup.  The light is connected to a timer.  The setup is nearly idiot proof, a good thing. 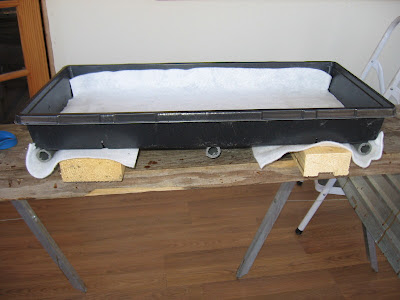 I bought two bags of Burpee’s seed starter at Lowe’s.  This year they changed over to a coir based medium instead of peat.  In addition to saving peat bogs, the coir seems to be better.  The dry peat was too powdery to penetrate the surface tension of the water without a lot of mixing.  If the pots were loaded with the dry mix they would not wick the water up.  The coir mix wets easier and has fewer lumps and chips in it.  Hope the plants like it.


The spinach seeds – a newer variety called Renegade - is still on backorder, putting me at the mercy of whatever is available from the stores.  On Saturday I picked up a variety called Collenta hybrid (NK) at the Rural King farm supply.  A few years ago I planted three spinach varieties in the same bed: Space, Double Choice and Bloomsdale Long Standing.  I thought the Double Choice variety had a much better flavor than the others.  I wanted more of this seed last year but did not find it in stores or the Burpee’s catalog so when I saw it back on the stand at Lowe's I bought a packet.
I’m always leery of buying seeds from the seed stands in retail stores, preferring to order from Johnny’s, Pinetree or Park Seeds.  The seed companies that sell in the stores have limited selection and often they all sell the same varieties of a vegetable – Early White Vienna kohlrabi, Black Beauty eggplant, Clemson Spineless okra.  These are proven varieties that have been around a long time, but may not be what I want, and often there are better varieties available from the catalogs.
Last year I grew Early White Vienna kohlrabi alongside Grand Duke, a hybrid kohlrabi from Pinetree.  The Grand Duke was always at least a week earlier than the EWV and had a larger bulb.  In a small garden that’s a big advantage to get a plant out in a week less and get something else in its place.  I’ve also found that some varieties are never available in stores – Gonzales cabbage comes to mind – and the hybrids developed by the over the counter seed companies aren’t usually as good as can be found in the catalogs.  There are exceptions of course, like the Double Choice spinach.
Here’s the planting timetable I’ve worked out for this year.  I don't seed tomatoes and peppers, instead buy the seedlings at the Bloomington farmer's market. 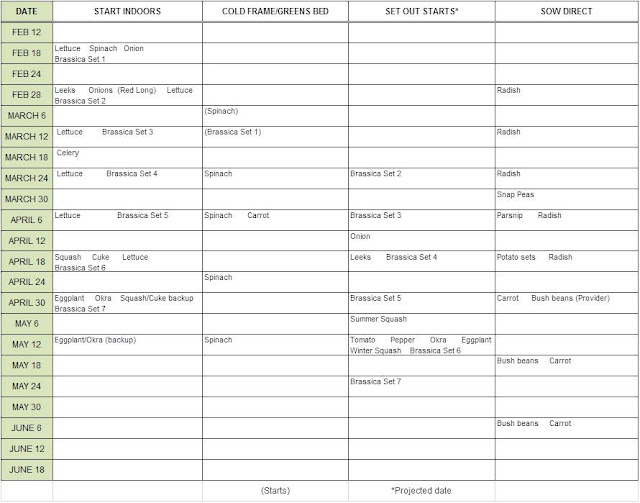 Posted by gardenvariety-hoosier at 7:46 PM

Your tabular seed starting schedule is well set up. I am in major seed starting mode right now too. Moved a bunch of earlier starts out to the unheated greenhouse to make room inside under the main grow lights for more items. It is only a few short weeks now before I will be planting out the very coldest hardy items - amazing how fast this winter went (for a change!).