I usually hike at Morgan-Monroe State Forest.  It’s got some nice vistas, a few decent climbs, and it’s only 20 miles away.  Right now it’s gun season for deer and it doesn’t seem prudent to go hiking there, so I’ve been driving over to Brown County SP to get some hiking in.  This is a great time of year to hike when the weather is good – there’s no bugs, the leaves are down and the views are great.


A number of counties in southern Indiana are hilly, but Brown County has the best hills.  At one time the county had a thriving artist community (TC Steele is probably the best known) who found something that spurred their creative impulses in the rolling hills.  The park is 16,000 acres but only the north half is developed with roads and hiking trails, and most of the hiking trails are in awful shape.  The southern half has only horse trails, and it’s about as remote a place as you can get in this state.


The one trail that I like is Trail 9, which goes into the undeveloped southern part of the park.  It consists of a 3 mile spur trail to a loop.  The entire hike out and back is 8 miles.  Most of the trail has been remade and is in good shape.  It’s also the most strenuous of the parks trails.  I used to go to the Smoky Mountains several times a year to get some hiking in (the hike up Mt. LeConte is my favorite) but that’s a 7 hour drive.  This hike would probably qualify as a moderate hike in the Smokies.  Most of the elevation changes from stream to ridge are 300 to 350 feet, but when you string them together it makes for a challenging hike.


The trail begins at Ogle Lake, actually a reservoir.  The trail angles up the hill on the right. 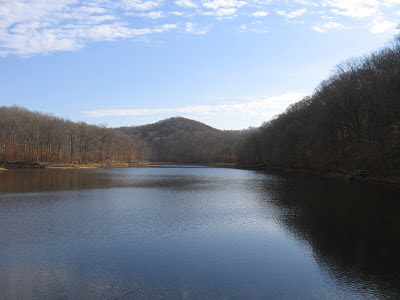 Once the first ridge is gained I can look out over the lake.  With the leaves down the views are very nice. 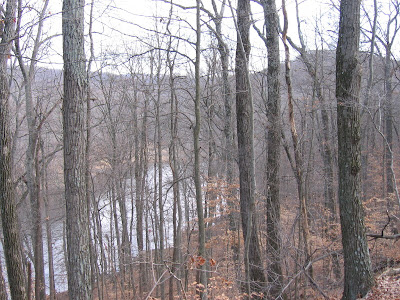 This is looking the opposite direction to the next ridge to the south.  The trees are not large here, I think it’s mostly because the topsoil is very thin and storms periodically knock trees down.  The trail doesn’t attack the ridge straight on because the slope is easily 45 degrees (down at the stream it looks more like a wall).  So the trail heads to the left and climbs the ridge then switches back to finish. 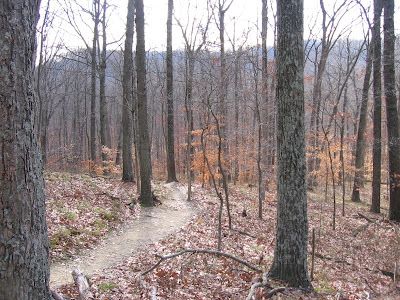 This is near the top of the ridge seen in the last picture as the trail is making the turn back to the west.  Out of breath here.  I’m really out of hiking shape and would probably have a hard time on a Smokies trail that gains several thousand feet. 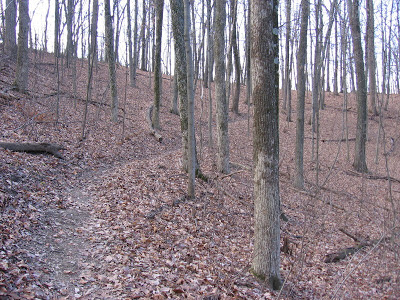 Gained the ridge and looking back to the north where I came from. 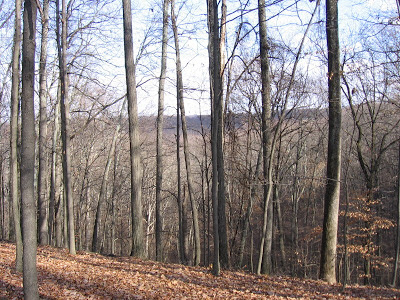 Looking to the south at the next ridge to climb.  I was working at orienting myself to the landscape, making mental notes and trying to pick out things in the distance that I would find as I hiked there.  I spied a pine grove on the next ridge that I later walked through. 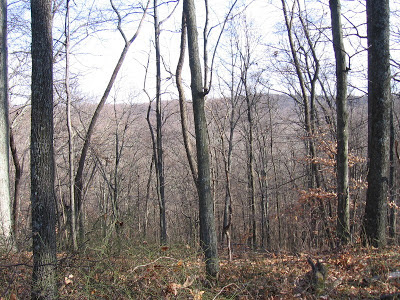 Continuing on the ridge, these chestnut oaks are the dominant tree on the hilltops.  I think they are the only tree that can thrive in the thin rocky soil  These are some larger than usual specimens.  In Jackson-Washington state forest, which is similar to this terrain, the state “conservation” department sold logging leases on the hilltops where they cut down the chestnut oaks.  They have little commercial value other than utility wood, as in pallets.  I can’t imagine how long it will take to bring back the trees there. 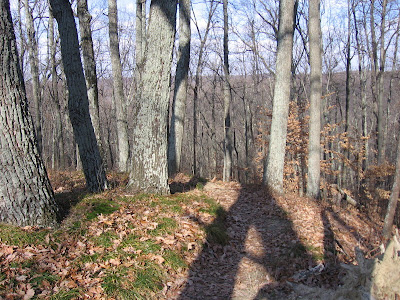 Down to the stream bed, now dry. 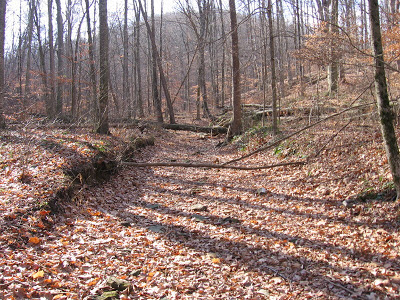 Then up the next ridge.  More huffing and puffing ensued. 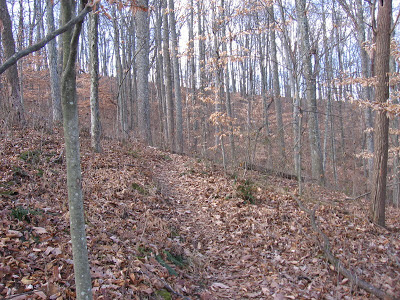 This ridge first ran east-west, then turned to the north.  This picture looked west.  I could see some farms and a red barn in the distance (in the center of the picture) so I must have been near the west side of the park. 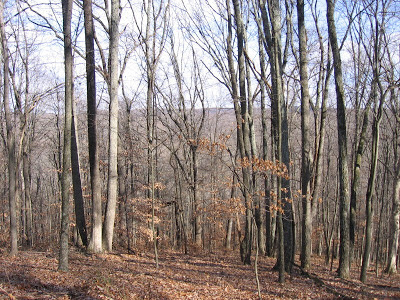 On the ridgetop the spur trail met up with the loop trail.  The trailmakers were kind enough to build a bench at this point which I was happy to use. Then it was onto the loop, which followed the ridgetop a ways, then dropped down to the stream, followed the stream, climbed back up the hill to the ridgetop again.   I hadn’t seen anyone so far.  It was very quiet except for the wind.  Nice to get away from everything for a while. 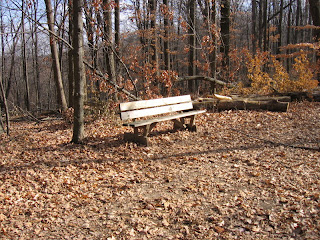 A large area of the hillside had only small trees and brush.  It looked like a storm had mowed down many of the trees here some years ago. 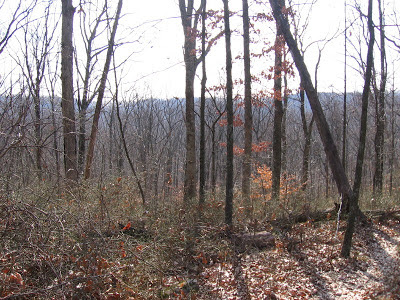 It’s interesting that there’s a lot of grass where the woods have been opened up.  I like this shot because of the way the shadow’s and branches all converge to the center. 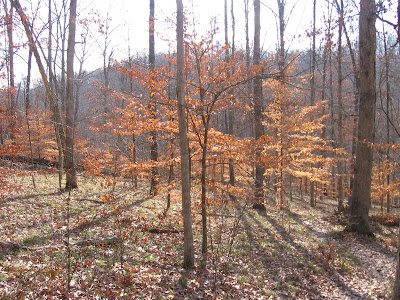 This stream has a little water in it. 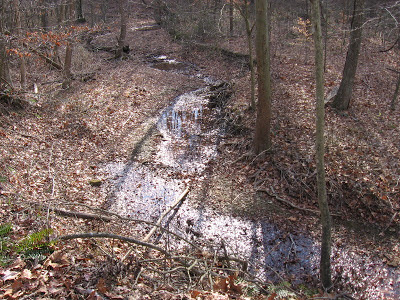 Back up the hill (more huffing and puffing) and full circle to the bench, where I stopped and had lunch.  Then it was a return on the spur trail.  Two more climbs and three descents and I was back at the car, total time 3 hours 15 minutes.  I’ll have to do this again before winter weather arrives. 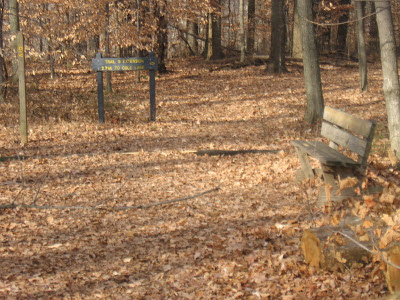 Posted by gardenvariety-hoosier at 6:48 PM