Last week I wrote a post - http://gardenvariety-hoosier.blogspot.com/2012/11/raised-bed-remodel.html - about removing the landscape timber frames on the two oldest raised beds.  The bottom rows of timbers were decomposing and I did not want to leave them break down in the soil as they are AC2 treated.   On Monday I put in a new frame made of yellow pine 2 x 8 anchored to stakes driven into the ground.


Building the beds was straightforward.  The lumber list consisted of six eight foot 2 x 8’s, a treated eight foot 2 x 4, and a pound of three inch anodized construction screws.   The two least straight 2 x 8’s were cut into four foot pieces for the ends.  The treated 2 x 4 was ripped into 2 x 2's and cut into stakes.  The box was screwed together over the bed.  I drilled 9/64" pilot holes with a power drill then drove each screw with a rechargable drill. Once the frame was built it was set in place and leveled by setting pieces of wood under the corners.  I wanted to keep the frames above the ground level but there’s a good bit of slope here so  I set the highest corner (on the right in the picture) into the soil about an inch.   Once the frame was in position I drove in stakes at each corner and attached the frame to the stakes with screws.  I had to accept some lean in the bed as the ground slopes too much to make the bed perfectly level. 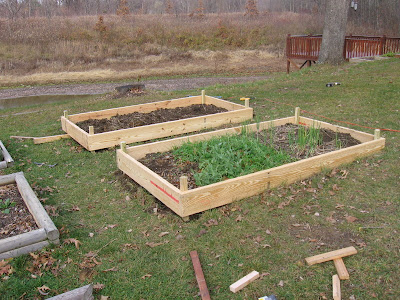 The new beds are a little wider than the old beds since the lumber is narrower.  I’ll probably just rake out the soil to fill the open space.  I guess I’ll get used to the look, but I like the old timber beds better.  There’s a lot of open space below the boards on the low side of the beds.  I’ll probably have to fill that in with a 2 x 2. 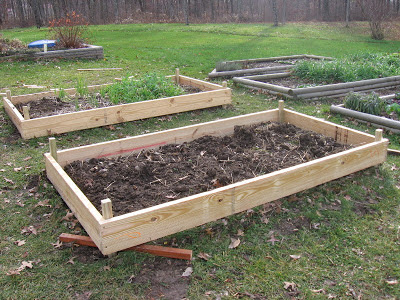 This is a good time to start making plans for next season.  The plans aren’t finalized but there will definitely be an expansion of the garden, mostly with self-watering containers and boxes.  The tree on the right is really too close to put more beds in, even though there is room.  There’s a chance it’s roots would find the nearest bed and start freeloading nutrients.  The stump in the foreground was a cherry tree.  Even though it was more dead than alive it still sent its roots to the nearest bed and nothing grew well in that bed until the tree was out.  That bed was thick with tree roots. 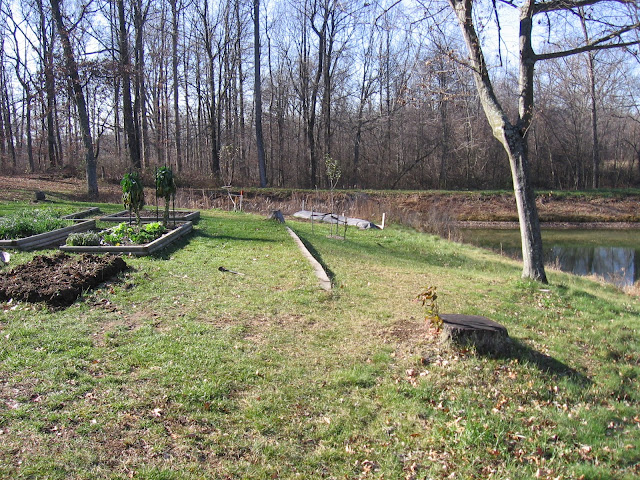 I plan to grow okra, pole beans, summer squash, and celery in containers.  I have one Earth Box and will have to build the rest from Rubbermaid containers.  I hope to build a Henley potato box as an experiment and am thinking about a way to plant sweet potatoes on the slope near the apple trees.  Last spring I trucked in a yard of dirt/compost to make the covered mound of dirt in the background.  It's held in place by a wood wall on the pond side.  I originally planned to put potatoes there but I'm now thinking about growing blackberries there.  Well I hope to get it all worked out by springtime, and it gives me something to think about as winter sets in.

Posted by gardenvariety-hoosier at 4:43 PM