Time to dig up the parsnips

I didn’t hold out a lot of hope for the parsnips.  I planted about 20 square feet of bed in them.  The moles were really bad last summer.  Either the moles or something else using their burrows  was eating the end of the roots and killing whole plants.  About half of the snips that I dug up were too damaged to use.  Most of them were a stunted globe with a number of taproots, or they had other damage.  These are the ones I kept, and some of these were later tossed.  I may not plant parsnips next year so the animals don’t come to expect a regular treat.  Total 3 lb 4 oz. 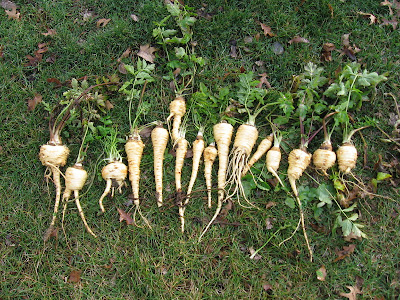 The two kohlrabi plants (9 oz) were pulled up.  They stopped growing some time ago and it looks like there will be real winter weather later in the week. 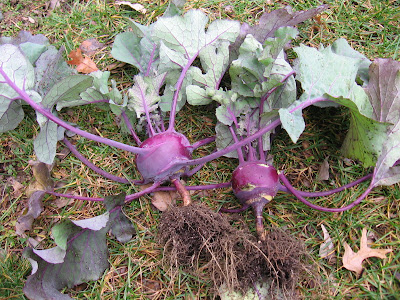 I picked some more brussels sprouts (1 lb).  There's at least another picking on the two plants. 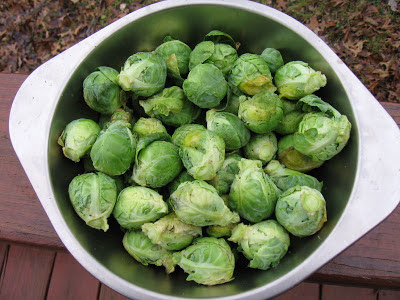 Posted by gardenvariety-hoosier at 5:23 PM

I actually skipped parsnips this year as we did not seem to be eating them with as much zeal last year as we typically used to. I think we were just getting tired of them. I will bring them back again next year, but was glad of the break. Your brussel sprouts are beautiful. I skipped those too and am sorry about that choice. Definitely rotating them back in for 2013.

diary of a tomato said...

Parsnips are notoriously finicky and difficult to germinate much less grow, you should feel quite proud of your harvest!