Just a note before the real blog.  I tried numerous times yesterday to upload photos from my computer to blogger with no success.  After doing some research on Google (kind of ironic) I found that many bloggers are having this problem.  Apparently Google wants people who use Blogger to use Google Chrome as their default browser, and pictures will no longer upload in other browsers.  I had to download Picasa web album (a Google product) and learn to use it (took me over an hour because I'm not so good on the computer) so I could make this post.  This is the kind of petty stuff that companies engage in all too often, especially media companies.  I'm kind of stubborn, and since Google is trying to pressure me into using their browser I will make sure that I never use their browser.  On to the post.

The greenhouse is about ready for the real world test – growing lettuce in winter.  For those who are new to this project here is what I’m trying to do.  I don’t have room (or money) to put up a real walk-in greenhouse.  I wanted a mini-greenhouse with a planting bench at a comfortable level that could be moved by one person.  The greenhouse should perform better than a coldframe or a hoophouse covered in plastic.  It needs to maximize sun exposure, have a high insulation value and use thermal mass to hold warmth in overnight.  I’ll find out over the next few weeks how well it meets those goals.


From the last post, the next step was the installation of the twinwall plastic glazing.  This is really quite amazing stuff.  It’s incredibly light, in fact similar in weight and feel to strong cardboard.  It’s also impact resistant, has an R-value of 1.6, and a transmissivity of 80%.  I can see why it is widely used for greenhouses.  This is not the only glazing option of course.  Polyethylene greenhouse film could be stapled on the inside and outside of the lid frame to give a comparable R-value.  It wouldn’t be as durable but is a little cheaper.
The twinwall sheets must be installed with the channels running vertical so water can escape. One side is treated for UV exposure and must be the outside face.  I used vinyl siding saw blade in the circular saw to make the cuts.  This worked perfectly with no chipping of the sheets.  Here a guide has been set up to crosscut the glazing for the lid. 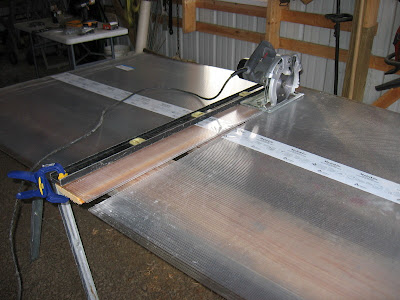 Once the front pieces were cut I started on the sides.  To make sure the dimensions were right I first made a template for the glazing with a piece of plywood, then cut the glazing from the template.  I wasn’t going to take a chance on getting a cut wrong.  It’s 30 miles to the lumberyard and this glazing is 42 bucks a sheet. 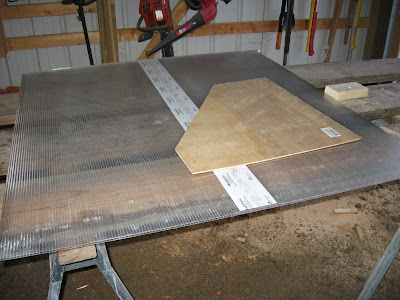 Cutting the glazing left some fine dust in the channels.  That’s were an air compressor comes in handy to blow the dust out.  Once the pieces were cut the edges with exposed channels have to be covered to keep out insects and dust.   I cut duct tape into two equal strips and applied the tape to the ends.  Once the tape was on I punctured the tape with a thumbtack over each channel.  Very tedious work but the channels need some airflow to remove condensation, and they have to be covered to prevent insects from getting into them.  You can buy a special tape to do this but it is a dollar a foot.  Too much money! 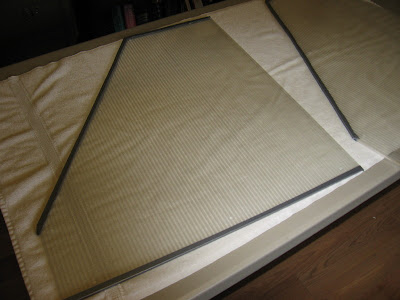 First I installed glazing in the sides.  I wanted glazing to go all the way up the side, but since the glazing has one outer face that changed the plan I had for cutting the triangles. The piece that was left after cutting the front pieces was not large enough to cut both triangle pieces.  I had to leave out the upper corner of the triangle then fill in that section on the greenhouse with wood.  I like to keep the design clean and consider this an unwelcome afterthought.  This is something I’ll have to work on when I make the next one.  The side pieces were attached with screws with rubber washers.  (I took this picture after all the glazing was installed). 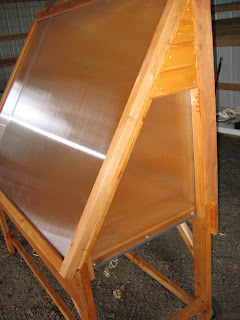 I put the 1 x 8 bandboard back on the side.  It’s mainly for esthetics but it also makes for a good handle to pick up the end since it stands away from the glazing. 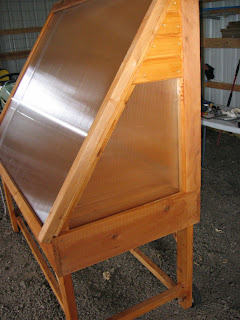 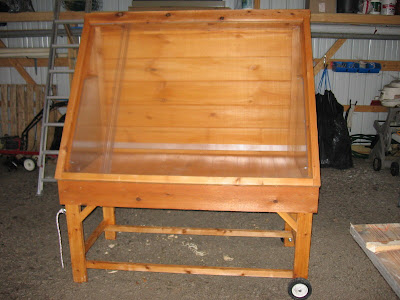 Next the Reflectix insulation went on the back side.  Here’s what it looks like, kind of like silvered bubble wrap. 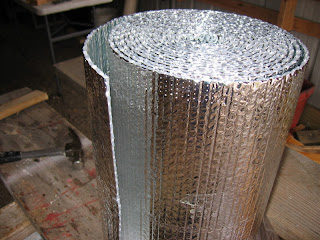 This material not only helps hold the heat in, but with its high reflectivity should boost the solar irradiation during the weak sun of winter.  I considered putting this on top of the bench but decided it would take too much abuse to hold up there.  I may still tack on a layer underneath the bench.   Here’s the front view with the Reflectix installed. 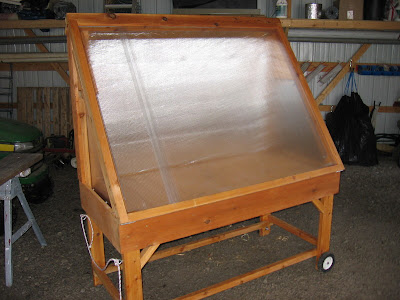 And here’s what it looks like with the lid propped open. 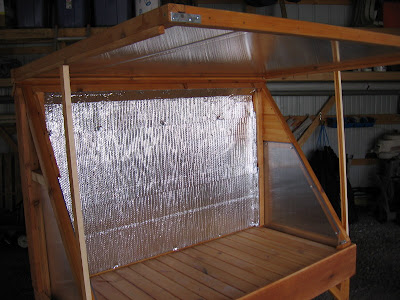 There’s a few details left.  I have to develop an easy-to-use prop to hold the lid open and a good latching system to hold the lid shut.  Those last details are never straightforward, in fact I’ve experimented with different designs for several hours and still haven’t worked out anything I’m satisfied with.  I also have to think about a temperature actuated lid opener.  I think it’s possible that the interior could overheat very quickly in the springtime.

I’ll make another post on this after I wheel it out into the yard and set in an Earthbox with lettuce planted in it.  Until then cheers.

Posted by gardenvariety-hoosier at 6:05 PM