It’s been awhile since the last post on the greenhouse project.  There was Christmas, travel, then a winter storm with howling winds that dumped a foot of snow.  The weather people said that the storm met the criteria and could be called a blizzard.  I believe them.  Snowed in for two days, I paid a neighbor with a tractor to plow the driveway.


Once I got back to working on the greenhouse the trigger switch on the miter saw gave up.  The switch would not shut the saw off.  Well the saw had served me well for 10 years.  It should be easy enough to find a replacement on the Internet, I thought.  Not so, I found.  The switch was classified obsolete and in spite of the fact that it was used on a number of Ryobi models it could not be found on parts websites or Ryobi’s site.  But it was on eBay.  It looks like an entrepreneur bought up the world’s supply of these switches and was now selling them for $24 dollars a piece. Given the price of a new compound miter saw I was happy to pay it.  My guess is the failed switches tendency to keep the saw running had thoughts of litigation dancing in suppliers heads.  I really don’t like making angle cuts with a circular saw, they are just not clean enough to make quality work, but there weren’t many cuts left to make, so the project went on.
I had to find a way to build a lid, which will contain the glazing, that will shed water and operate on hinges.  Finding the design wasn’t easy.  Finally it came to me.  If the lid has a lip around the perimeter the hinge can attach to the lip and the assembly will swing free of the base when it is swung up.  Every other option I considered either required too much additional structure or the lid would interfere with the base when it was lifted.

With the plan in mind I notched some scraps of wood on the table saw, constructed a mockup corner that I attached with hinges to the ridgetop.  The mockup swung away from the ridge without interfering and will prevent water from entering at the top.  Problem is the notch removed too much wood from the frame pieces and did not leave enough thickness to make strong groove for the glazing. 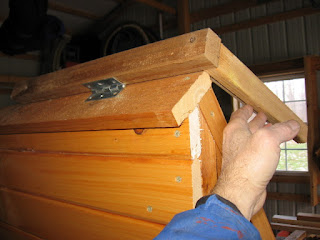 I went with plan B: instead of making a groove in the lid a strip of wood will be glued and fastened around the outside of the frame to make the lip - addition instead of subtraction.  It won’t look as clean as a single piece of wood but the frame will not be weakened by removing a large groove.  Using this design I made mockups of the top and bottom corners.  With the corners set in place I could get accurate measurements of the lid frame.   (At this point I had also attached some wheels to the legs). 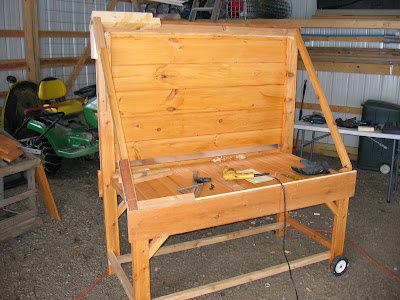 Once the lid frame pieces were cut to size I screwed the frame together to make sure it was the proper size then disassembled the frame and cut the grooves for the glazing on the table saw.  Constructing then deconstructing may seem like an excess of caution, but there are a million things that can go wrong when building a new design and I wanted to make sure it would work before proceeding. 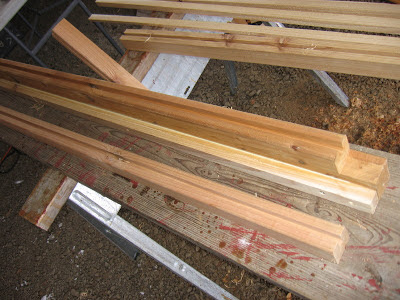 It's getting close.  I planed off the top edge off the 1 x 8 (the white strip you see in the picture) to get the lid to seat on all four sides.  Once I purchase the glazing I’ll unscrew the bottom 2 x 2 from the lid and slide the glazing in then put the bottom piece back on.  But first I’ll drill a series of weep holes in the groove to channel away water.  It’s been through a lot of changes but it’s finally taking shape.  When it’s finished I’ll wheel it into the back yard and plant some lettuce in containers and see how it does. 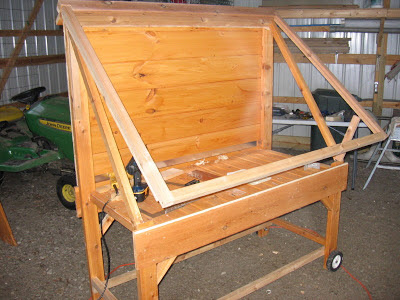 Posted by gardenvariety-hoosier at 12:18 PM

This is a very interesting project! I envy your ability to design it. I have done limited concept to creation shop projects but nothing too ambitious. Looking forward to seeing the finished project.