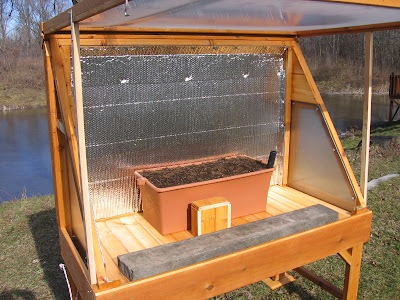 It's been about a week since the mobile greenhouse was pulled into its place behind the vegetable beds.  An earthbox seeded with lettuce and a limestone block was set inside.  I have been monitoring the temperature using a wireless temperature monitor (base station located inside my house) and two remote sensors, one inside the greenhouse in a little box to block any direct sunlight from falling on the sensor, and another sensor on the back side of the greenhouse (also in shade) to monitor the outside temperature.  The base unit can monitor up to three channels and will record minimum and maximum temperatures since the last reset.   You can buy these units at many big box stores for about 20 dollars, although additional sensors will cost more.


The greenhouse will be about 20 degrees warmer than the outside temperature on a cloudy day, and as much as 35 degrees warmer on a sunny day.  At noon today it was 15 degrees, sunny and very windy outside. 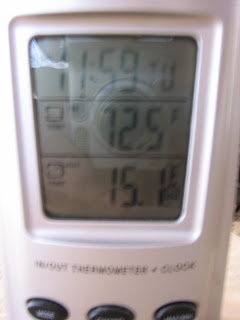 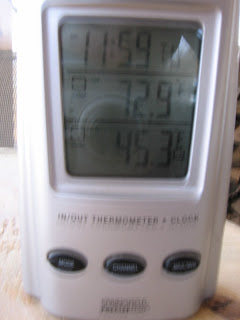 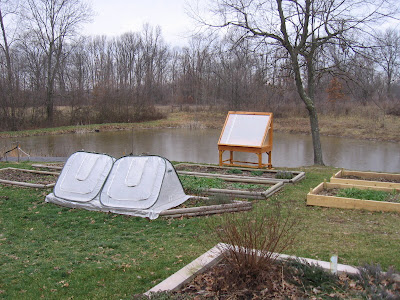 So how does the greenhouse perform on a more typical winter day for this area?  Actually quite well in my opinion.  A few days ago we had an "average" January day – a high of about 35 degrees, partly cloudy with occasional peeks of sun, then a low the next morning of 20.  The temperature inside the greenhouse stabilized at just under 60 degrees and held at that until sunset, when it slowly fell until it was 35 degrees at midnight.  By the next morning the greenhouse temperature reached a low of 28 degrees (outside temp 20 degrees) then climbed quickly after the sun came up.
The climate inside the greenhouse that day was similar to a March day with a nightime frost.  That’s enough to give me hope that lettuce and spinach can be grown in this thing much of the winter.  Now if that lettuce would hurry up and germinate.

Posted by gardenvariety-hoosier at 3:55 PM

This is an interesting experiment! I found it takes longer for things to germinate, but they do, and even with freezing overnight, as long as they get at least 10 hours of sunshine, they will grow, and the more sun, the faster they grow.

We found similar result to you with our low hoops -- the single layer of plastic and small amount of thermal mass just wasn't enough to keep things from freezing. In our large hoophouse, the air temperature will get close to the outside temperature, and the top inch or so of soil might freeze, but underneath the soil was unfrozen, and that allowed cold hardy plants to overwinter and start producing in the early spring as soon as the days got long enough.

I love all the data from the monitoring. The rapid loss of the passive heat during night time is very typical. One solution is to put a heat sink into the set up to capture and then release the heat energy during the night time hours. A black jug of water that absorbs the passive solar during the day (warming the water) that then releases energy as the water cools at night is an example.