A brief walk around the garden

I have to admit that more could have been done in the vegetable garden this spring.  There was a kitchen remodel that seemed to have no end in sight and I let things go.   Compared to other years about half as many cole crops were planted, but when one is wondering just when it will be possible to clean and cook food, the motivation is just not there to start a lot of seedlings.

With the summer crops growing well it looks like things will be back to normal before long and the slow start will look like a minor hiccup.   A number of improvements have been made recently and I wanted to show them.

I added a top course to the terrace that was built last year.  I like terraces.  On sloped ground they improve the esthetics of the place.   They also make walking more agreeable.   And they just look good, civilized even. 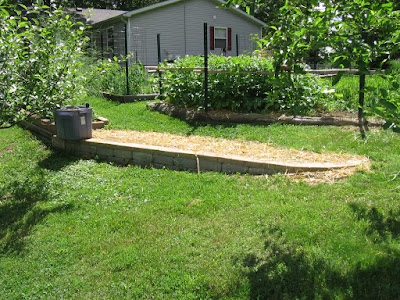 Once the grass is established this area will be ideal for self-watering containers, or maybe some kind of strawberry planter.  The curved end actually goes into shade in the afternoon, ideal for lettuce. 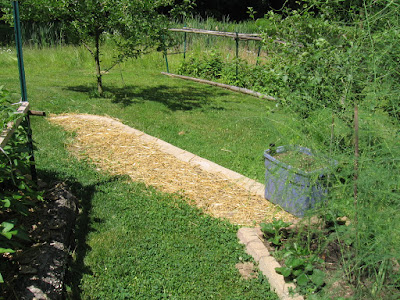 Cucumbers appear to be growing well.  So far I've been removing any female blossoms.  The vines are just not large enough to grow fruit yet, and they will produce more in the long run. 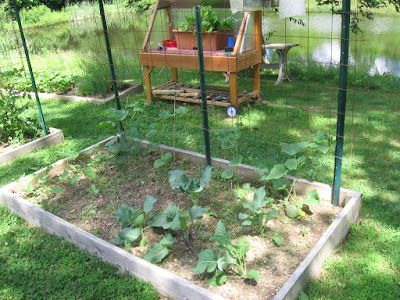 This bed and the one just in front of it have been the least productive beds.  There is a large branch on a nearby ash tree that shades the beds until early afternoon.  They are also the first beds to be shaded in the evening.  Actually that should be past tense, because yesterday I rigged up a pole with an electric chain saw on the end and cut off the branch from the roof of the house. 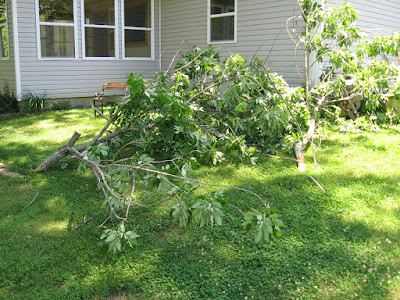 This is a big deal.  Now the beds start to get sun in the late morning, probably two to three more hours per day.  Last year I grew tomatoes in these beds and they got diseased badly.  I think the extra sunlight in the morning will make a huge difference here.

Speaking of tomatoes they were suckered this morning. I removed the suckers (these are indeterminate plants) at the base of the plants.  These suckers are thin and will not be strong enough to support tomatoes.  Removing them also allows for better movement of air near the soil.  Usually the first really strong sucker appears about two feet high.  For these Big Beef tomatoes which are planted two per cage it's actually hard to tell the sucker from the main stem, they are about equal thickness. 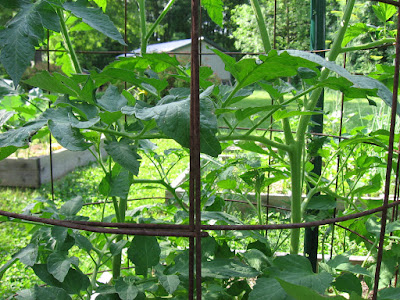 And the plants look much better with the low whippy growth removed. 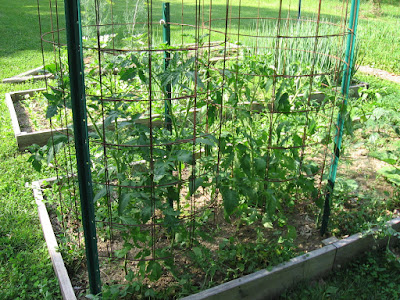 I've never seen dill this size.  This bed grew overwintered spinach and was covered with a plastic greenhouse over the winter.  Apparently this warmed the soil and gave these volunteer dill an early start.  They are nearly six feet high.  I'll harvest the seeds then cut them down to make way for the okra. 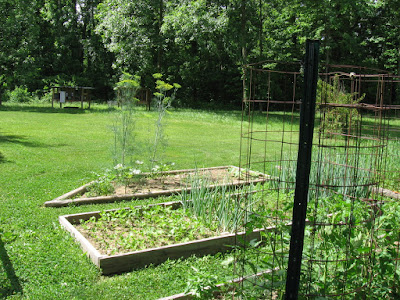 There was a wasp in the flowerheads.  I don't know what it was doing there. 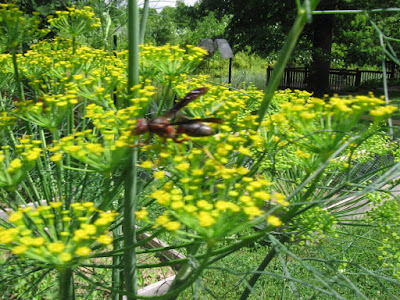 Posted by gardenvariety-hoosier at 4:40 PM

I approve of your new terrace. Very nice. A good place to put container-grown tomatoes or similar...

I'm sure that removing those large branches will make a world of difference to that bed. I had a TON of volunteer dill this spring too - in fact they are still coming up.

That dill really is big. As for the wasps, they are pollinators too. The terrace looks really nice.