I think June is probably the most important month for a vegetable garden.  This is the month when the hot weather annuals have to establish a vegetative presence in order to be productive the rest of the summer.  Last year the month of June was a disaster in these parts.  It was rainy and cloudy most of the month.   Growth of hot weather plants slowed to a crawl, and tomatoes developed diseases that took them all by late summer.

So far this summer is vastly different.  There has been plentiful sun with rain showing up when needed.  Wednesday it rained most of the day, a good soaking rain, and since then the sky has been nearly cloudless.  Needless to say, these conditions promote strong growth.  The tomatoes are now about five feet high, nearing the top of the cages.  Every morning I check for shoots that have grown outside the cages.  Any that I find are pushed back inside the cage. 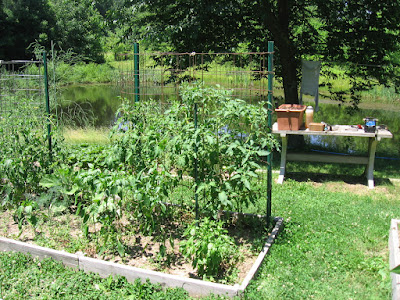 The lower branches are getting some blight, but nothing like last year.  There aren't many varieties that are blight resistant, but in a normal year a healthy plant should be able to outgrow the blight.  Last year they couldn't do it.  After this picture was taken I cut off the infected branches.   Removing them allows for better movement of air through the plants,  very important near the base since the peppers will block much of the air flow. 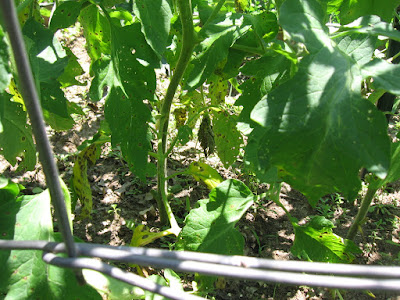 This bed contains only root vegetables.  I guess an onion is a root vegetable.  It's growing Ruby Ring onions,  Mokum and Nantes carrots, beets, Red Tropea onions and parsnip.  All of these crops are tedious to start but worth it in my opinion.   Thursday I weeded the entire bed, a real PITA but made easier with the recent rain.  That's the last weeding the bed gets.  The parsnip will soon be large enough to shade out new weeds.  Purslane seems to be really bad this year.  It's supposed to be edible but I find it tasteless and the rabbits won't eat it either. 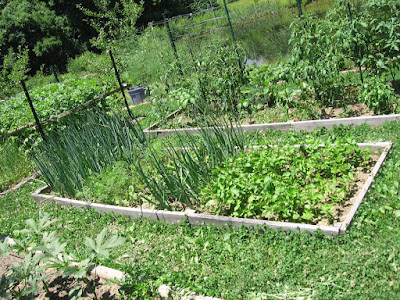 I picked some okra yesterday.  It seems a bit early for okra, but never look a gift horse. . .   I've debated whether to get the huge dill near the okra out of the way but have left it.  By the end of the month I should be able to harvest most of the seed heads and get a lot of dill seed, then I'll cut them down.  The okra went into an omelette. 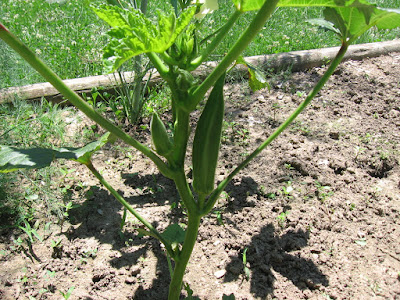 The winter squash is showing itself over the cover crop of field peas and oats.  Next year I plan to leave the oats out and just plant the field peas.  The rabbits liked the oats when young and tender but now they won't eat them, and the oats have a suppressing effect on other plants while peas don't.   Both oats and peas are now showing the effects of hot weather and this plot will change appearance quickly.  The potatoes in the background are looking especially vigorous this year, now chest high.  Wire has been strung in two directions to keep the plants upright. 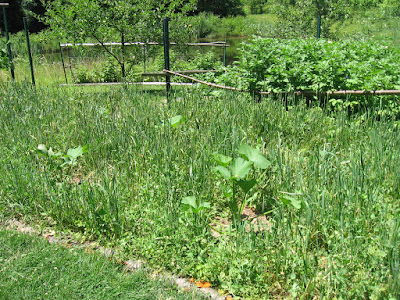 Pole beans are starting their climb up the strings. 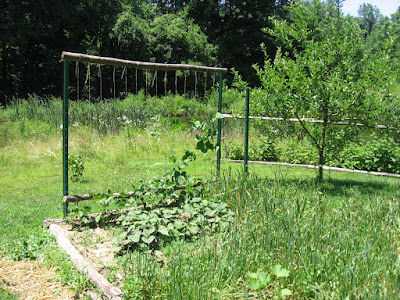 It won't be long until the first slicing cucumbers, summer squash and bush beans are ready.  Summer's here!
Posted by gardenvariety-hoosier at 6:29 PM

I wish I could say the same about my garden. For the last month or so we have had mostly dull gloomy weather, with temperatures only reaching the mid to high teens (Celsius of course!), and very little sun. It's interesting to read about the "food fads" of your rabbits - it seems they can sometimes be a bit fussy, right?

Sounds like the perfect weather for your tomatoes, peppers, and cucumbers which are gigantic. Everything looks so healthy.

It's been really hot here with no rain, so the tomatoes are a bit stressed even with me watering everyday.

The garden is looking good. Nice to get that combination of sun with just enough rain. It has been sunny here but fairly dry and we could use a little more rain. And teh rabbits here are definitely picky about what they will eat, preferring to mow down lettuces and the tops of my beans.

Hurray! Isn't it wonderful when the weather cooperates and give the garden just what it needs? Very jealous of your "rain showing up when needed" comment - we have been bone dry around here.